Mark posted this on his blog. It is a timely post for me as I have an old Dunnie that I need to use the trick on…. now to practice that! Thanks Mark

I had this Pre-Republic Peterson’s Sterling bent bulldog 80 with a damaged rim. It is marked Made in Ireland in block format which I think places this pipe pre 1946. 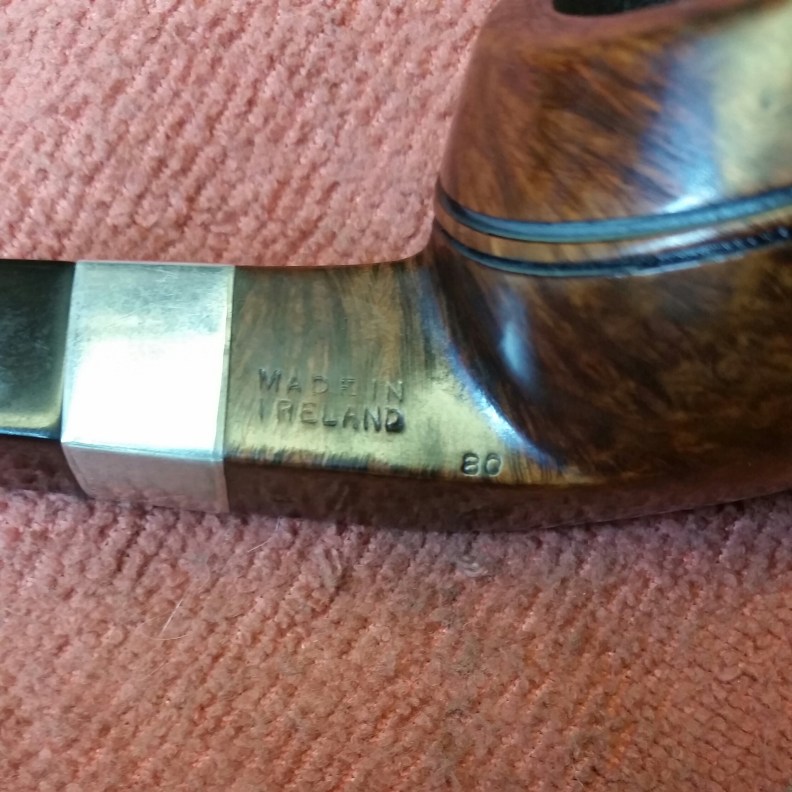 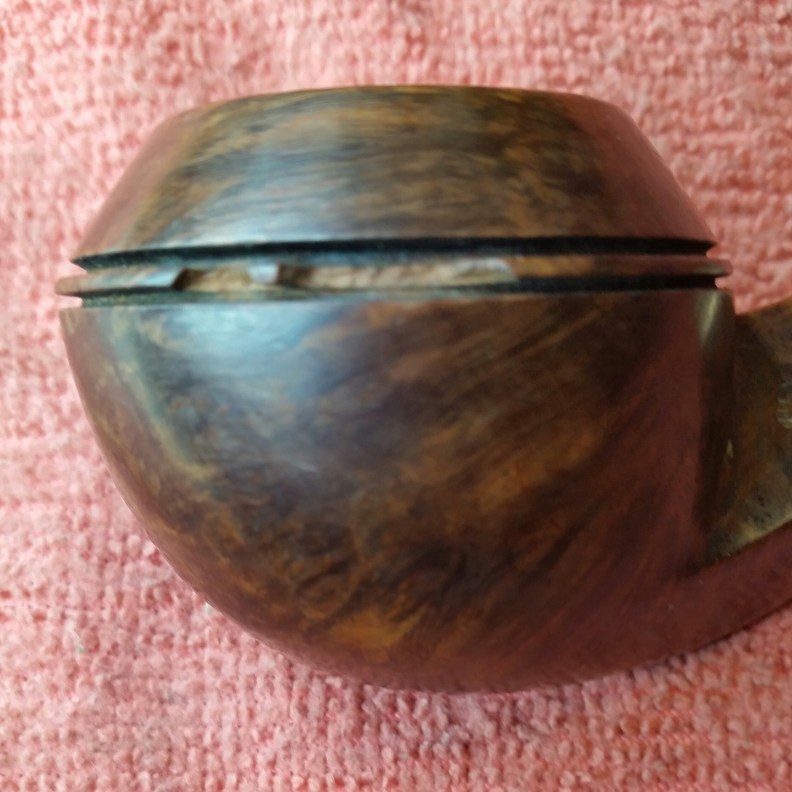 As you can see the main problem was the missing ridge on the side of the bowl.

I used clear superglue mixed with briar chips, not dust. I’ve found that dust turns black when mixed with the glue. I got the chips which are slightly larger by grinding down a donor stummel with a dremel. I filled in the missing area, let dry and sanded and filed down the excess 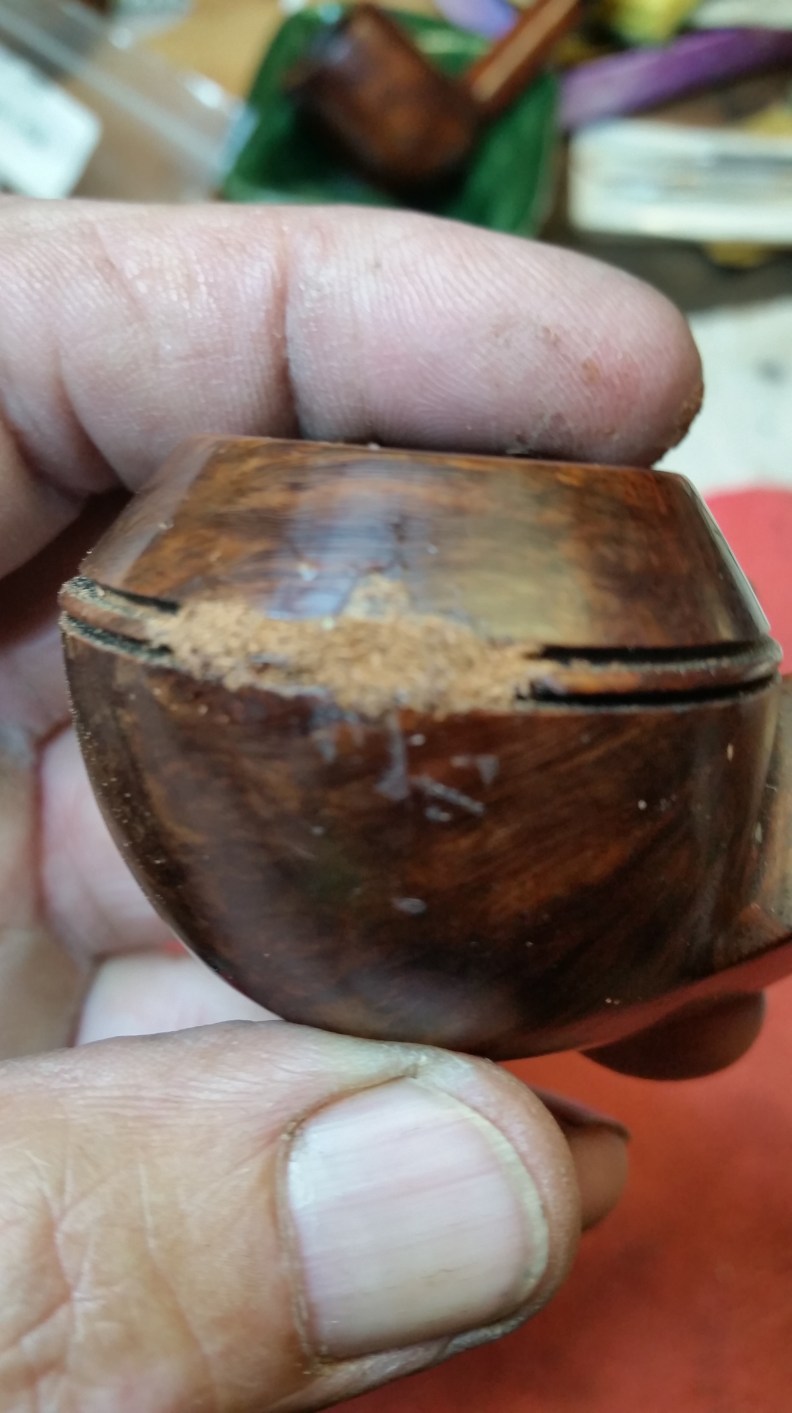 I used a needle file to cut a groove and finished deepening the grooves with a serrated kitchen knife.

. When I was almost finished, a piece broke off. 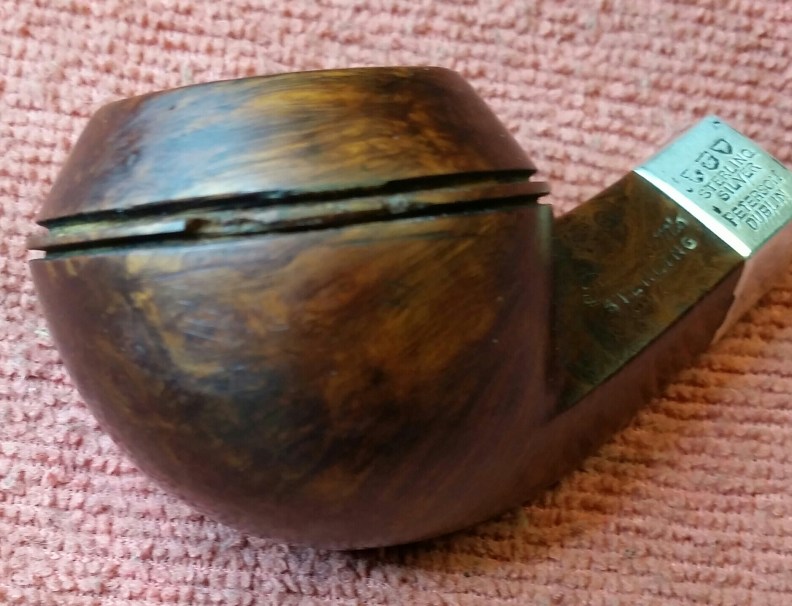 So I mixed up more glue/briar chips and made a second patch. 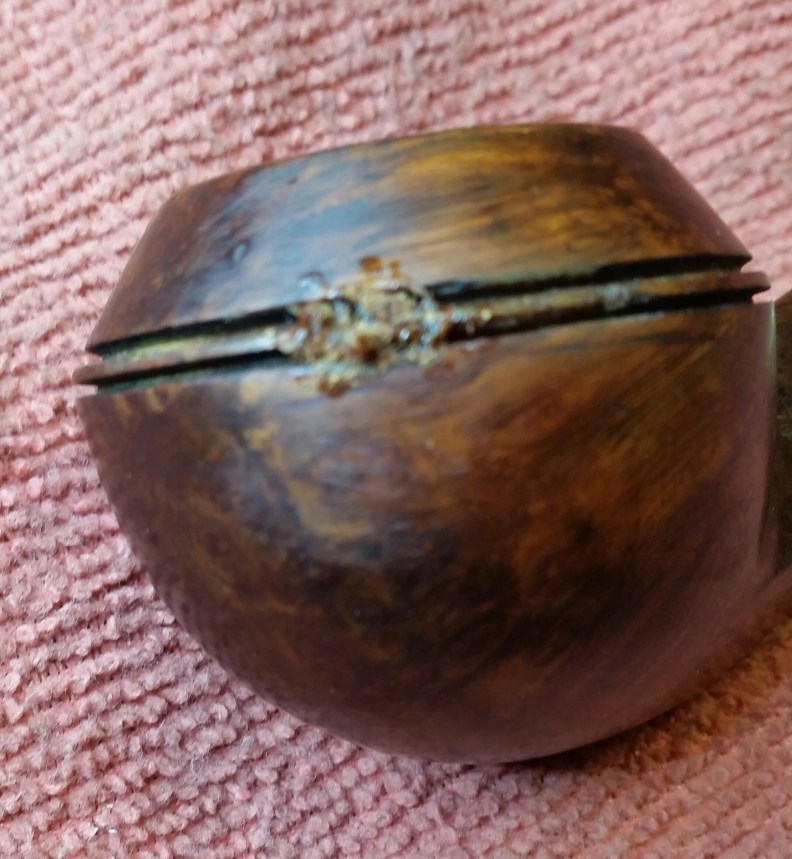 Again sanded and filed and then touched up the…

I decided to add this LHS Bulldog to the sale. It is thus the eleventh pipe from the box of pipes that I was gifted by a good friend of mine with the instructed purpose of cleaning them up and selling them with all of the proceeds going to the aid of earthquake victims in Nepal. Once again all funds raised will all go to the SA Foundation, and organization that has worked in Nepal for over 15 years helping provide recovery, housing and job training for women who are victims of sexual exploitation and trafficking. The ongoing earthquakes (over 300) that continue to shake Nepal have left much in ruins. The SA Foundation Project there was able to find new housing for the women and help with staff as well. Every dollar raised from the sale of these pipes will go to the work in Nepal.

I have had quite a few LHS pipes on my work table over the years but this is the first time I have seen this shape bulldog. It is squat and short but has a large bowl – the size of my thumb and the bowl is quite deep. There are two rings around the bowl and a bulldog cap. The rustication pattern is also quite unique – looking like a thatched pattern. There is an aluminum fitment in the shank of the pipe and an aluminum tenon with a separated stinger that screws into the fitment in the shank. The stem was slightly oxidized and underturned. There were no major tooth marks or chatter on the stem. The finish was in decent shape, just dirty and dusty. The rings around the cap were plugged with debris that would need to be cleaned out. The airway in the bottom of the bowl was very small looking. The bowl had been reamed recently and was clean that way.

The close up of the bowl shows the constricted airway at the bottom of the bowl on the back side. Too me it looked to be almost plugged with tars and would not be too difficult to open.

I unscrewed the stem from the shank to look at the internals. I have found that pipes with the metal fitment in the shank are generally quite dirty on the other side of the metal mortise and take some work to clean. This pipe was no exception. I tapped the metal end against my desk top and a lot of chunks of tar fell out on the desk top. The stinger was inserted into the threaded tenon and also was quite dirty and the slots in it were also restricted with buildup.

I heated the tenon and stinger with the flame of the lighter hoping to loosen the tenon in the shank and straighten the fit in the shank. I heated it until the stem itself was warm and the metal tenon did not budge. I was able to remove the stinger for cleaning.

I examined the tenon insert in the stem (probably should have done this first). I found that the metal plate that acted as a stem adornment and the tenon were integrated into one piece and no amount of heating would ever loosen the tenon from the shank. I had to come up with another solution. I screwed the stem back on the pipe and set it aside to contemplate my course of action. I thought of adding a thin plate of Lucite or briar between the stem adornment and the shank adornment but decided against that. I let it sit for a while and worked on the stem.

Suddenly I figured out a potential fix. If I were to sand down the shank end enough to allow the stem to sit correctly I could possibly get the alignment correct. I measured the depth of the threads in the shank and then those on the tenon and found that the thread went deeper than the length of the tenon by about 1/8 of an inch. If I could remove some of the aluminum shank end plate I could get it to seat correctly. I used my topping board and pressed the end of the aluminum end plate flat against the board. I carefully worked it in a circular motion on the sandpaper. I checked frequently to make sure I did not take of too much or too little of the aluminum plate.

The next photo shows the end plate after it had been topped sufficiently. The scratches from the sandpaper would easily be polished off with micromesh. I have also included four photos of the different angles on the stem to show how the underturn had been corrected. The fit was perfect.

With the stem fit corrected I then turned to cleaning out the inside of the stem and the shank. It took many pipe cleaners, cotton swabs and alcohol. I also used the drill bit from the KleenReem reamer to open the airway into the bowl.

I scrubbed the exterior of the bowl down with oil soap and a tooth brush. I picked out the debris in the twin rings around the cap. I sanded the stem down with 220 grit sandpaper and then followed that by sanding with a medium and a fine grit sanding sponge.

There were two small tooth marks in the vulcanite on the underside of the stem. I repaired those with a drop of clear super glue. I sanded the glue patch with 220 grit sandpaper and then repeated sanding it with the two sanding sponges. When finished I sanded it with micromesh sanding pads – wet sanding with 1500-2400 grit pads and dry sanding with 3200-12,000 grit pads. Between each set of three pads I rubbed the stem down with an Obsidian Oil saturated sock that I use for this purpose. I let it sit for just a few moments before continuing with the next grit of pads. The oil gives traction for polishing the stem.

I used the micromesh pads to also polish the aluminum on the shank and the stem. I worked through all of the grits to polish it to a shine. I also used 0000 steel wool to polish the stinger and the tenon. Then I buffed the stem with Blue Diamond Plastic polish to further raise the shine. I put it back on the bowl and buffed the bowl and shank lightly with Blue Diamond. A light touch keeps the buffing compound from collecting in the grooves. I also carefully worked around the white stamping on the shank. I gave the stem several coats of carnauba wax and then rubbed the bowl down with Halcyon II Wax and hand buffed the bowl and shank with a shoe brush. The finished pipe is shown in the photos below. I really like the shape and the rustication on this one. I am looking forward to loading a bowl and enjoying it on the weekend ahead. Thanks John.

This LHS Bulldog is a beautiful pipe and the rustication and stain gives it almost a multidimensional look. It should make someone a great addition. The entirety of the sale price will go to the Nepal project. I will pay the postage so that does not get taken off the proceeds. If you are interested in reading about the SA Foundation you can look at their website at http://www.safoundation.com.

The 999 is Peterson’s version of the Rhodesian pipe shape. Pre-Republic versions are slightly chubbier than a modern 999. A chubby shape 999 has been on my “Holy Grail” pipe list for a number of years. This one came to me via a member of the PipesMagazine forums. It was a piece in huge treasure trove of estate pipes he bought as a lot. The seller sent me good pictures of the pipe and disclosed the issues he observed. The biggest concern was the dark marks on the bowl side. The pipe arrived today and gratefully, as I suspected, they were indeed only scorch marks. Sometimes you don’t have to find a pipe, they find you.

The pipe is stamped “Made in Ireland” in the circle format, which I’ve learned was used for 1945 to 1947. While the band is stamped “Sterling” as is the finish, there are no date hallmarks on the pipe. This would indicate that the pipe was made for sale in the United States, where silver hallmarks weren’t required. The dimensions of this 999 are almost identical to those of my GBD 9438’s, including the weight of 54 grams.

The pipe had plenty of dings, including on the silver band. The nomenclature was legible with the naked eye, a detail that I needed to preserve

The stem had mild oxidation and a few tooth marks. The tooth marks lifted up nicely with some heat, a big restoration plus. I soaked the stem in a mild Oxy-Clean solution.

While the stem was soaking, I turned my attention to the bowl. I used a worn piece of 8000 and then 12000 grade micromesh sheet. I was able to diminish but not completely remove the scorch marks, but I’m satisfied with the result. I think using some lower grade wet paper, I could probably remove the marks. But, in doing so I might change the profile of the bowl and the pipe would certainly require a complete stain strip and restain. I then I didn’t want to risk the nomenclature to that process. I wiped on a very light coat of Medium Brown stain to blend in the lightened area with the existing color. I then buffed out that area with some Tripoli followed by White Diamond. After several coats of Carnuba wax, the effected area blends in well with the rest of the bowl. Here several bowl pictures showing the original marks, pipe after the micromesh treatment and one after the stain/buff and wax.

I removed the oxidation from the stem with 800 grit wet paper, and worked my way thru the 1500 and 2000 grade papers. Next up, 8000 and 12000 grade micromesh sheets were used. The stem was then buffed with White Diamond and Megiuars Plastic Polish. There was a stubborn burn mark on the stem that I was able to diminish but not remove completely. The large dent on the bottom of the stem finished off nicely and is almost invisible.

Below is the completed pipe. The pipe is far from “Mint” condition, but I think the patina earned after decades of use is fitting.

Update:
I went back and removed a little oxidation I observed around the P-lip button. I also was able to dimish the scorch mark on the stem.