Two old buddies are heading off on their Annual Fishing Trip. For argument’s sake we’ll call them Kevin and Bob.
Bob notices that Kevin is being more grumpy than usual and tries to lighten things up by way of conversation.
Bob: “So Kev, last week was your birthday, happy belated.”
Kevin: (grudgingly) “Thanks.”
Bob: “Say, did, Laura, buy you that Estate Dunhill that you were constantly hinting at?”
Kevin: “Na”
Bob: “Well what did she get you instead?”
Kevin: “SUV.”
Bob: “New or used?”
Kevin: “New of course.”
Bob is extremely puzzled as Kevin is still driving the same beat-up pickup that was already old when Saddam was considered an ally.
Bob: “You know, Kev, you and I have been friends for a long time, and I’m entitled to say that you are an ungrateful sour puss. Laura buys you a New SUV instead of a second hand pipe, and that has you in a bad mood.”
Kevin: “Humph!”
Bob: “Well what kind of an SUV was it anyway?”
Kevin: “Socks, Underwear, Viagra”
— Thanks to mate on smokingpipes.com/forums. (I don’t know, but for some reason this struck me as a good gift idea for the next man who gives a lady grief for enjoying a pipe.)

INTRODUCTION
Steve comments now and then on the pleasure he gets from researching a pipe’s history. I know his motivation is not to tuck away, in his mind and for his own use, the information he gathers. I can’t say for sure what drives Steve, but I suspect he, also, is a natural born reporter – which is to say collector and sharer of information – with an insatiable longing to spread his news to readers as well as to supplement or in some cases create new pipe lore available online. Steve laughed at this when I suggested the notion, but I would say his crowning achievement so far is the definitive and exhaustive research that got to the bottom (which was deep) of the complex origins and Byzantine life of Brewster pipes – a close second to his exposé on the history of the Colossus Pipe Factory (CPF).

As a former freelance news reporter/photographer and still a spot news enthusiast, not to mention aspiring literary writer and pursuer of other investigative endeavors, I have a knack of my own for probing. When I can’t find any mention whatsoever of a pipe brand, I therefore become somewhat vexed. This was the case in particular with the first two pipes I restored for this series. One was a Frasa (or maybe FRASA as an acronym) French natural bent billiard;. The other was a Clinton natural straight oval that was neither the Israeli Alpha brand type nor the U.S. variety. Forever a dogged reporter at heart and also having a serious case of Obsessive-Compulsive Disorder, however, I intend to stay on these stories and others until I uncover the facts. The truth is out there.

As for Medico, there is much to be found online and in actual bound and printed books on pipes and the long, glorious history of their peaceful enjoyment. Indeed, the latter tools still exist, however tenuous their future. I hope and pray they survive for as long as Mankind occupies this planet, if not beyond. The history of Medico began with S.M Frank & Co.in New York in 1851, giving S.M. Frank the claim to the oldest pipe manufacturer in the U.S. By the time Frank formed Medico Pipes in 1957, it had already consumed eight other pipe makers, some still celebrated and others less remembered: the Manhattan Briar Pipe Co. in 1922; William DeMuth & Co. (WDC) in 1937; The Kaywoodie Co. (later Kaywoodie Pipes Inc.), Yello-Bole, Kaufman Brothers & Bondy (KB&B), the Reisss-Premier Corp. and the New England Briar Pipe Co. in 1955, and the New Jersey Briar Pipes Co. in 1956.

Discussions today about Medico pipes, in person or online forums, can become downright nasty, pitting vehement supporters against rabid critics. Nevertheless, older Medicos certainly possess a certain heightened quality and charm, and the brand’s lines are still made to be inexpensive and durable. As cigarsinternational.com put it, Medicos are “no-nonsense pipes made for the everyman.” That, they no doubt definitely are, at prices ranging from $15.99-$39.99. Medico has made pipes with materials including traditional briar, Brylon (an S.M. Frank synthetic invention of high temperature resin and wood flour) and even a unique bent tall billiard covered with a mysterious material described by Pipephil as either felt, synthetic fur “or a piece of wall-to-wall carpet.” Well, that settles that. To tell the truth, I would love to own one of those, if only for show-and-tell and to be able to call myself a carpet piper, despite the risk of static-electric charges and burns.

SOME FEMALE SMOKERS AND PIPE MAKERS
I have put out various general calls for help in my local and online pipe communities searching for women who smoke pipes and would be willing to share some of their experiences and preferences, and my friend Liz invited me to become a Friend of her Facebook Ladies of the Briar Group. I still need to pursue that line, but at least have four blogs left to do so.

Since my second ladies pipe blog, I have re-focused my research on areas of interest I had not even considered until some other friends mentioned them. The one was revealed to me by Jennifer, the owner of Stag Tobacconist in Albuquerque where I am a very frequent fixture. The other, suggested to me by another Smoking Forums UK friend, Ed, was a fact that struck me as so obvious I was embarrassed to have overlooked the idea. Both, I believe, will prove of great interest.

Unknown to me until Jennifer’s revelation, was that Samuel Gawith Fire Dance Flake – a Virginia mix with blackberry, vanilla and brandy flavorings that was a favorite of mine back in my aromatic-heavy days but remains a blend I still enjoy on occasion – was formulated by one of the few female tobacco blenders in the U.S. The light flavorings and Best Brown Virginia used give Fire Dance a nice little bite.

Of more significance is the presence of females – ye gads, what’s the world coming to? – in the business of making pipes. Ed mentioned the following names and provided a few links, worried these were not enough, and I looked up the rest to get samples of their work: Vilma Armellini, one of three daughters of the great Italian pipe maker Mauro Armellini and who regularly assisted her father in making many of his pipes and took over the business upon his death; Anne Julie; Nanna Ivarssen, and two newcomers who have been crafting fine pipes for the past several years, Sabina Santos and Scottie Piersal. Alas, I have been unable to locate a pipe made entirely by Vilma Armellini, but the first photo below shows her father’s work that likely included her help. I will, you can bet, continue looking. 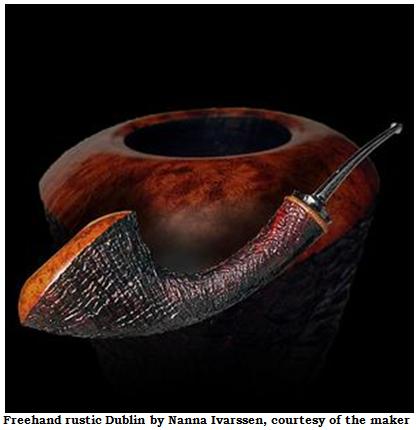 In light of my severe case of P.A.D., I expect to add samples of these brilliant women’s pipe crafting art to my collection as soon as possible.

RESTORATION
Now, for the drab little Medico Real Briar acorn as I first saw it. 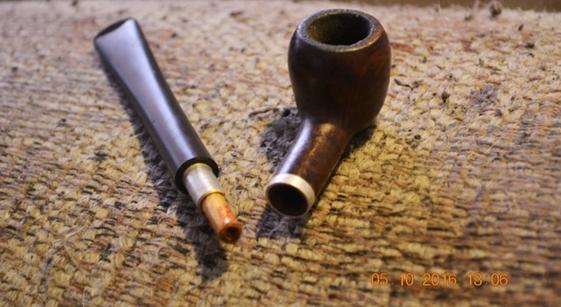 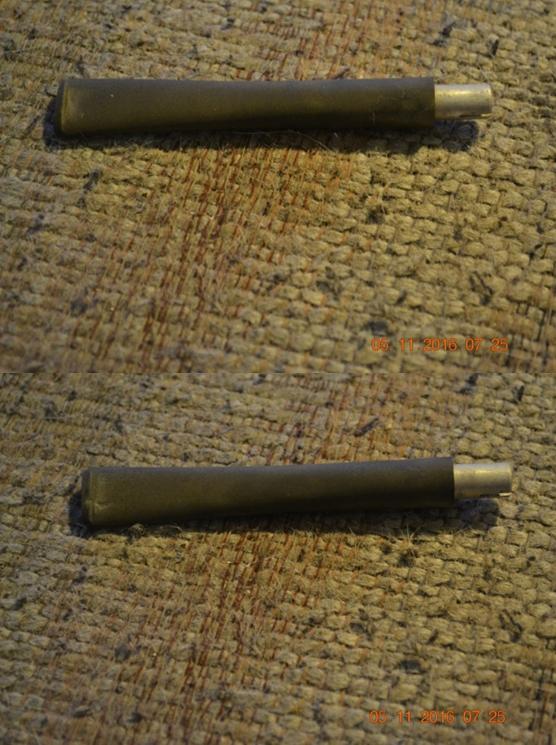 I put it in an OxiClean bath and the stummel in used Everclear (not to drink, but to strip prior pipes).

I took the bit out after a half-hour or so and wet micro meshed it. Then I went ahead and buffed it with red and white Tripoli, White Diamond and carnauba. 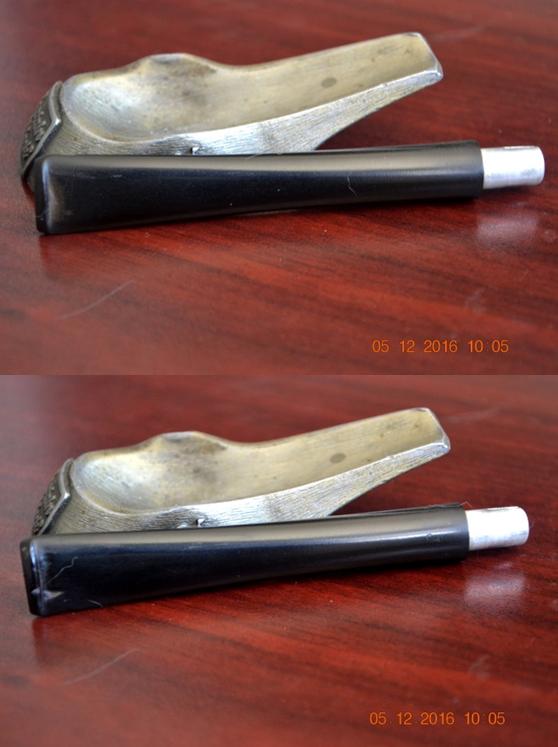 I apologize for the gunk in the last photo. I just noticed it, but I assure you it came off with a wipe, or I wouldn’t have sold it the next day. About an hour after putting the stummel into the Everclear, I removed it and swabbed the chamber with one small soft cotton square and the outside with another. 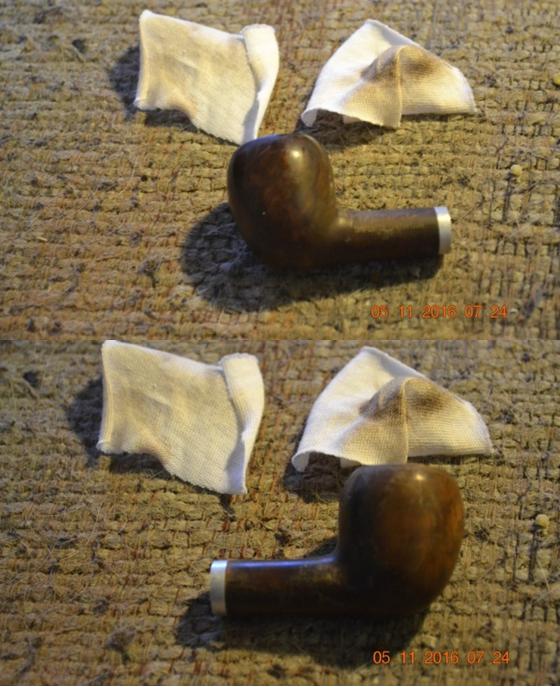 As usual, there was still old stain to remove, but other than uncommon situations such as removing that awful red varnish used on almost all pipes made in China , for example, I prefer not to let the wood soak too long. A little sanding with 220-grit paper in easy, even strokes, for the most part in the same direction, worked off the rest of the drab and dreary cloaking stain on the briar that had left darkness there and nothing more, as Edgar Allen Poe wrote. 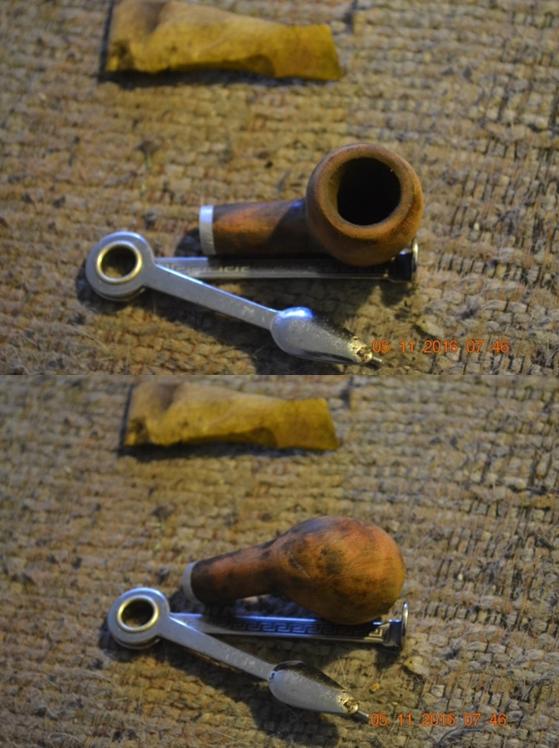 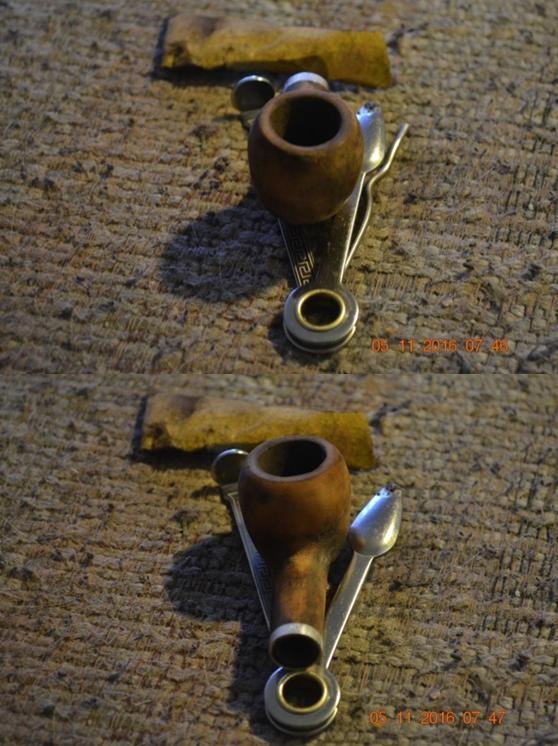 Call me anything other than Ismael, but I always get a distinct rush when the stummel is ready for micro meshing. In an average restoration of this type, with no serious, time-consuming obstacles, micro meshing most of the time is the halfway + 1 point, or the hump of the project. However, with five steps to go before completion of the pleasant task – it was better than the movie, which I had seen 10 times already – I was exactly halfway finished. The point, however obtuse, is that in my mind I was almost to the finish line. Oh, never mind! Alright, then, I proceeded to micro mesh from 1500-12000. 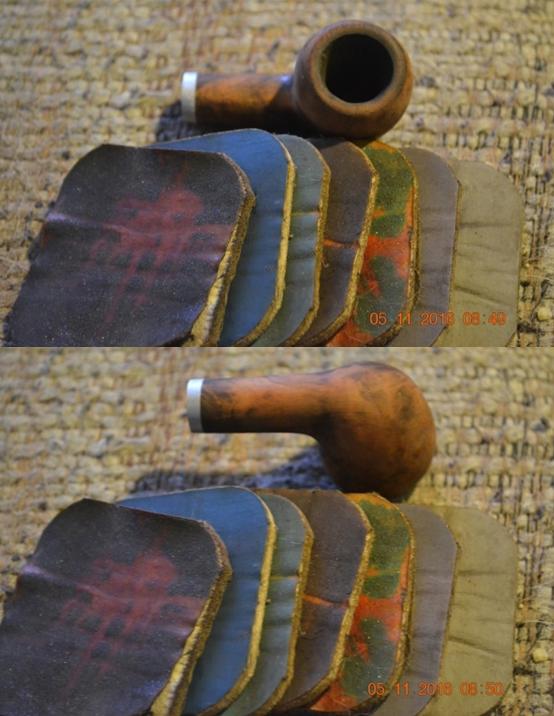 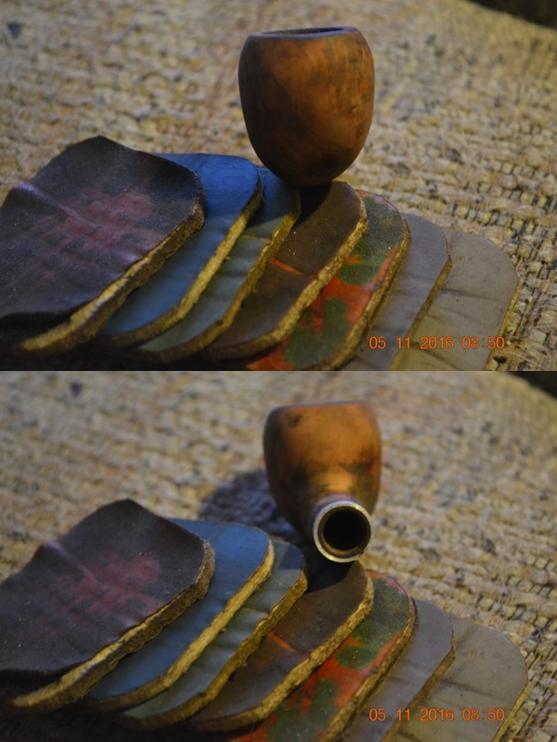 Next up was re-staining the stummel, using Lincoln brown alcohol-based shoe and boot leather dressing. 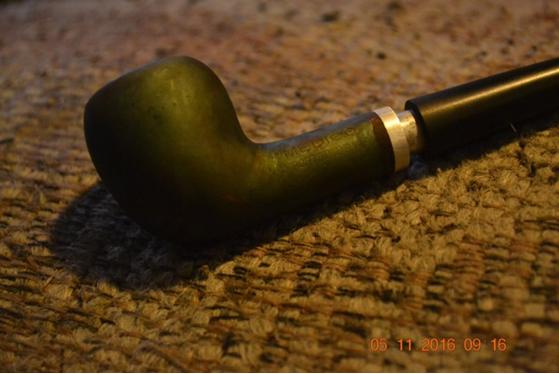 I also enjoy the brief puff of blue fire after holding my Bic or a good kitchen match close to the stain-wet wood, like flaming baked apples served with ice cream. Sort of. But that doesn’t make me a pyro. I prefer to think that life is like a bowl of ice cream, even if it’s served up on fire at times. Consequently, a few minutes after torching the stummel, I started with 2400 and 3200 micro mesh to remove the charred neon green coating. That broke through to dark brown, at which time I switched to super fine four-ought steel wool to take the darkness down a few notches. 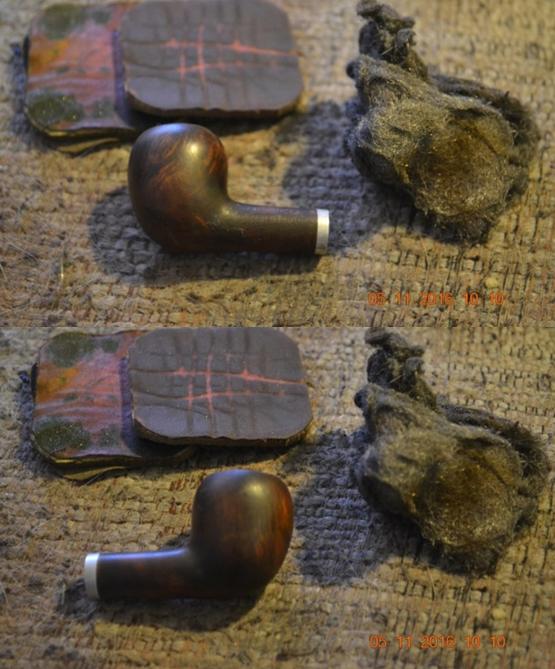 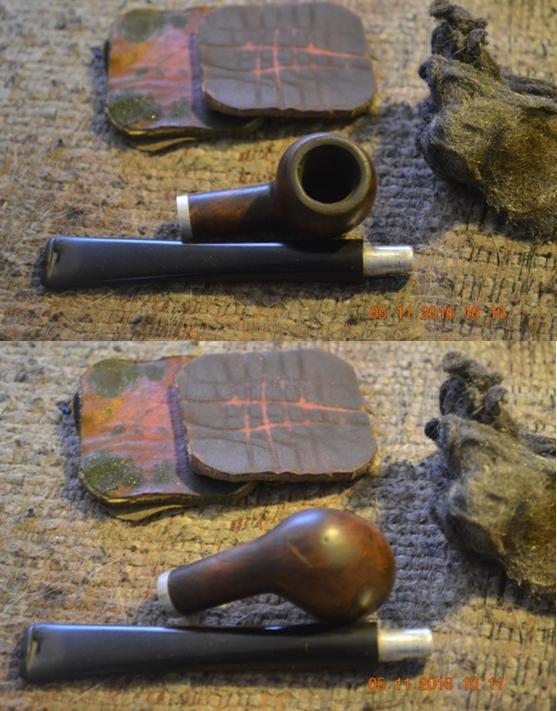 Ready for the second to last step in this somewhat off-the-norm order of events, I retorted the pipe at last. 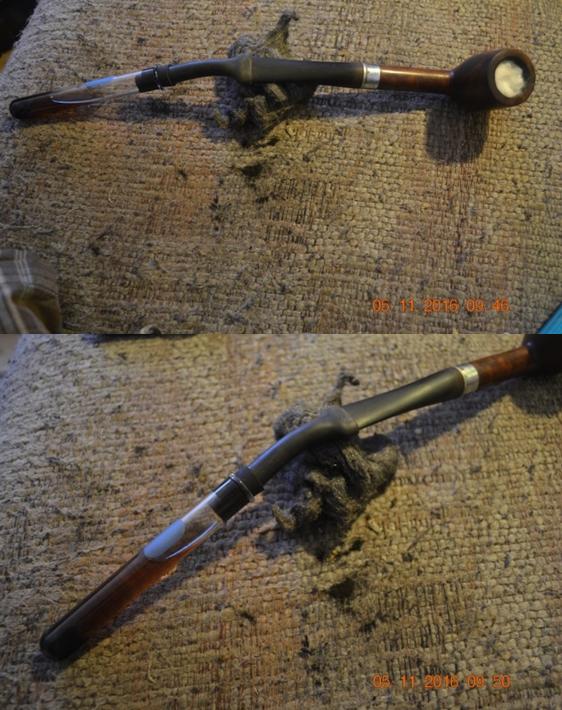 After running a fluffy cleaner through the shank and clearing more last-minute soot from the chamber with a cotton cloth square, I buffed the stummel with white Tripoli, White Diamond and carnauba, using the wheel I keep clean after each to work the compounds further into the briar and keep them from smudging.

CONCLUSION
So far, by an eerie coincidence if there is such a thing, all three of the pipes I have restored for this ladies pipes series have sold. The Frasa (or FRASA) went to my good friend and fellow pipe club member, Ashley. The Medico Acorn of this installment was snatched up by another woman, Rita, whom I met last night when she saw me smoking a pipe and mentioned that her husband “used to enjoy his pipes all the time” (I took this rather ominous wording as either a sign that the good man is no longer with us or just not with Rita), as well as the fact that she gave up cigarettes by puffing on a pipe of her own with tobacco until she weaned herself off both, and she added that she missed the feeling of the pipe in her mouth. No comment. The third pipe, a Citation Real Briar oval, sold to an 18-year-young man who also approached me because of the fine pipe in my mouth at the time. Ashley reserved hers before it was even restored while the others fell victims to my persuasive sales technique and the fortuitous circumstance that I had my available pipes with me. Still, I didn’t push any of the ladies pipes on anyone. They were all picked out of the box by the happy buyers.
SOURCES
http://pipesmagazine.com/forums/topic/smoke-jokes
https://rebornpipes.com/tag/brewster-pipes/
https://rebornpipes.com/2013/04/14/some-reflection-on-the-historical-background-on-cpf-pipes/
http://www.smfrankcoinc.com/home/?page_id=2
https://pipedia.org/wiki/S.M._Frank
http://www.pipephil.eu/logos/en/logo-medico.html
http://www.smfrankcoinc.com/home/?page_id=143 Medico pipes
http://www.cigarsinternational.com/brands/1552/medico/
http://www.tobaccoreviews.com/blend/1965/samuel-gawith-firedance-flake
http://www.theitalianpipe.com/artisans/armellini.htm
http://www.annejulie.com/pipes.html
https://pipedia.org/wiki/Ivarsson,_Nanna
http://www.sabinapipes.com/
http://mypipeclub.com/forum/index.php?PHPSESSID=18ed18b6fd1b7cfa581ca18da56449f7&topic=805.0 Scottie Piersal