The next pipe on the table came to us from one of Jeff’s pipe hunts on the Oregon Coast. Over the past year or so we have picked up several of these. It is an interesting pipe in that the base is shaped like a revolver pistol and made out of gutta-percha while the handle of the pistol is made from briar. It is threaded and screws into the base of the bowl. The bowl has three air holes in the bottom of the bowl surrounding a larger centre hole. To me it seems a bit of an oddity to put the barrel of the gun into your mouth and suck on the smoke but then, to each his/her own I guess. This one had definitely been smoked. While the bottom of the bowl was raw briar the top half had some cake on it and some light lava overflow on the rim top. The gutta-percha base had a lot of well carved nooks and crannies that had been filled in with dust and debris. There was also some gummy substance around the middle of the shank/barrel that appeared to be material from a sales label. Jeff took photos of the pipe before he started his cleanup work.

He took photos of the rim top and bowl to give a clear picture of the thickness of the cake on the top half of the bowl. There were spots of lava on the rim top. The varnish coat was also peeling and blistering. He also took photos of the barrel or shank of the pipe to show the sticky substance all around it. The top and underside of the stem show chatter and tooth marks. 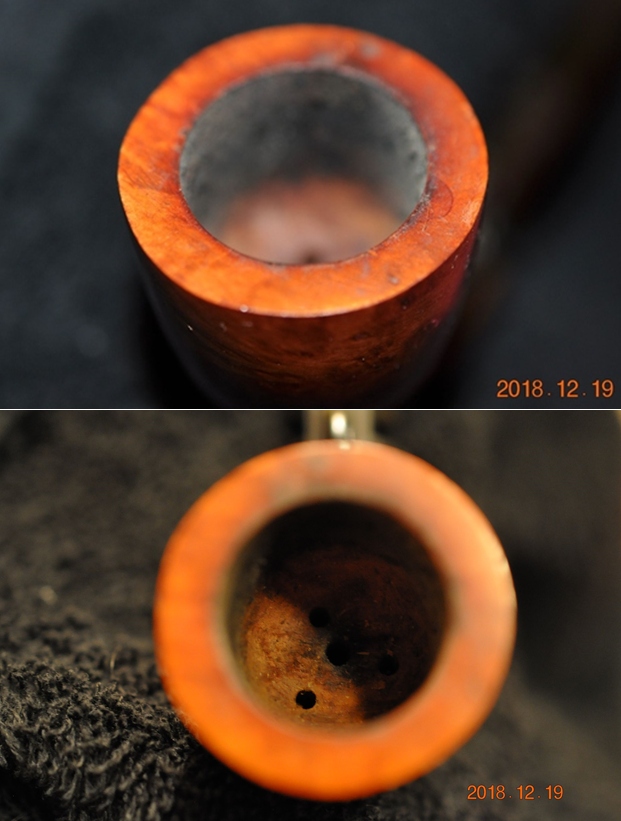 Jeff took photos of the sides and heel of the bowl to give a picture of what the briar around the pipe looked like. There is some stunning grain under the varnish coat. The first photo shows the only stamping on the pipe – MADE IN FRANCE.

I have worked on quite a few gutta-percha pipes over the years so I turned to a blog I did on the material the pipe was made from (https://rebornpipes.com/2017/12/08/59256/). I quote from that blog below.

That led me to do some research on the web to see what I could find out about the material. (Honestly, I don’t know what I would do without Google. I don’t know how I survived college and graduate school without it.) The first link I found and turned to was on Wikipedia (https://en.wikipedia.org/wiki/Gutta-percha). I quote large portions of that article below to set the base for understanding the material’s composition and origin.

During the second half of the 19th century, gutta-percha was used for myriad domestic and industrial purposes, and it became a household word (emphasis mine). In particular, it was needed as insulation for underwater telegraph cables, which, according to author John Tully, led to unsustainable harvesting and a collapse of the supply.

According to Harvey Wickes Felter and John Uri Lloyd’s Endodontology: “Even long before Gutta-percha was introduced into the western world, it was used in a less processed form by the natives of the Malaysian archipelago for making knife handles, walking sticks and other purposes. The first European to discover this material was John Tradescant, who collected it in the Far East in 1656. He named this material “Mazer wood”. Dr. William Montgomerie, a medical officer in Indian service, introduced gutta-percha into practical use in the West. He was the first to appreciate the potential of this material in medicine, and he was awarded the gold medal by the Royal Society of Arts, London in 1843.”

…In the mid-19th century, gutta-percha was also used to make furniture, notably by the Gutta-Percha Company (established in 1847). Several of these ornate, revival-style pieces were shown at the 1851 Great Exhibition in Hyde Park, London. When hot it could be moulded into furniture, decorations or utensils (emphasis mine).

It was also used to make “mourning” jewelry, because it was dark in color and could be easily molded into beads or other shapes (emphasis mine). Pistol hand grips and rifle shoulder pads were also made from gutta-percha, since it was hard and durable, though it fell into disuse when plastics such as Bakelite became available (emphasis mine). Gutta-percha found use in canes and walking sticks, as well.

The material was adopted for other applications. The “guttie” golf ball (which had a solid gutta-percha core) revolutionized the game. Gutta-percha remained an industrial staple well into the 20th Century, when it was gradually replaced with superior (generally synthetic) materials, though a similar and cheaper natural material called balatá is often used in gutta-percha’s place. The two materials are almost identical, and balatá is often called gutta-balatá.

Jeff had cleaned up the pipe with his usual penchant for thoroughness. He reamed the bowl with a PipNet Pipe Reamer and cleaned up the remnants with a Savinelli Fitsall Pipe Knife.  He scrubbed the bowl with undiluted Murphy’s Oil Soap with a tooth brush. He rinsed it under running warm water to remove the soap and grime. He cleaned out the inside of the shank and the airway in the stem with alcohol, cotton swabs and pipe cleaners. He scrubbed the base with the Oil Soap and rinsed it off with warm water. The pipe looked very clean when I received it. The varnish coat on the bowl was still spotty and would need to go but otherwise it was quite nice. I took photos of the pipe once I received it.

The rim top and edges of the bowl looked very good. The stem portion of the base had some light tooth marks and chatter on both sides near the button. 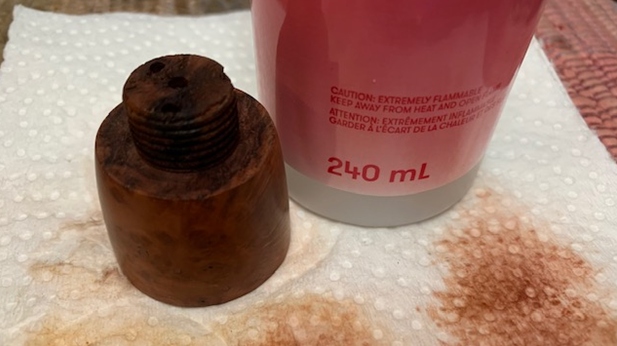 I polished the bowl and the rim top and sides with micromesh sanding pads – wet sanding with 1500-12000 grit pads and wiping it down after each pad with a cloth. 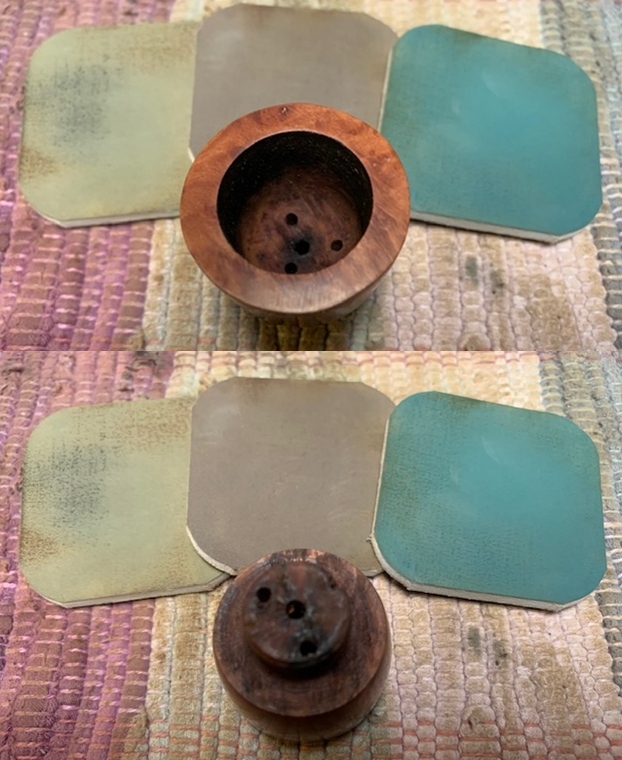 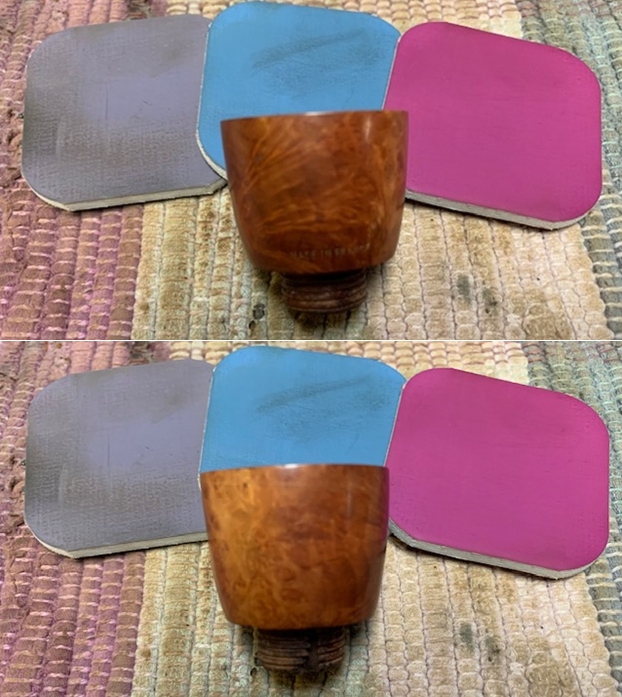 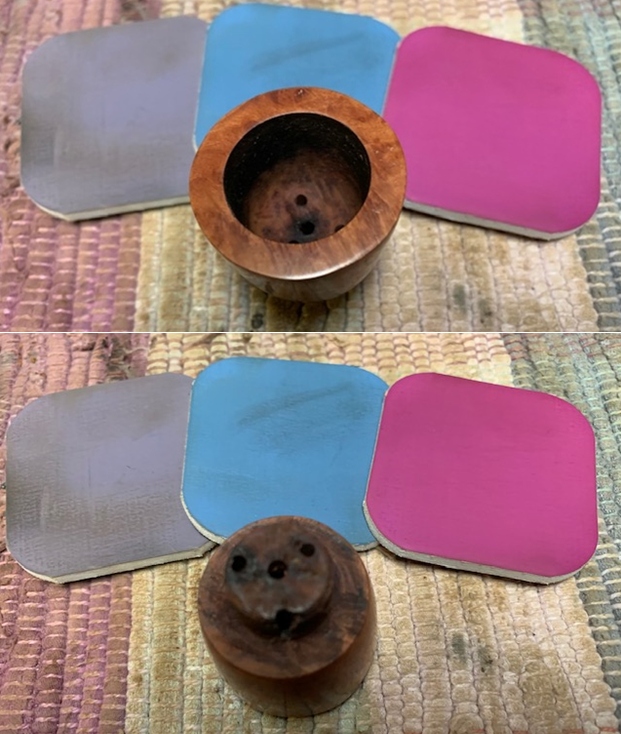 I rubbed the bowl down with Before & After Restoration Balm. I worked it into the surface of the bowl top and sides with my fingertips to clean, enliven and protect the briar. I let the balm sit for a little while and then buffed with a cotton cloth to raise the shine. 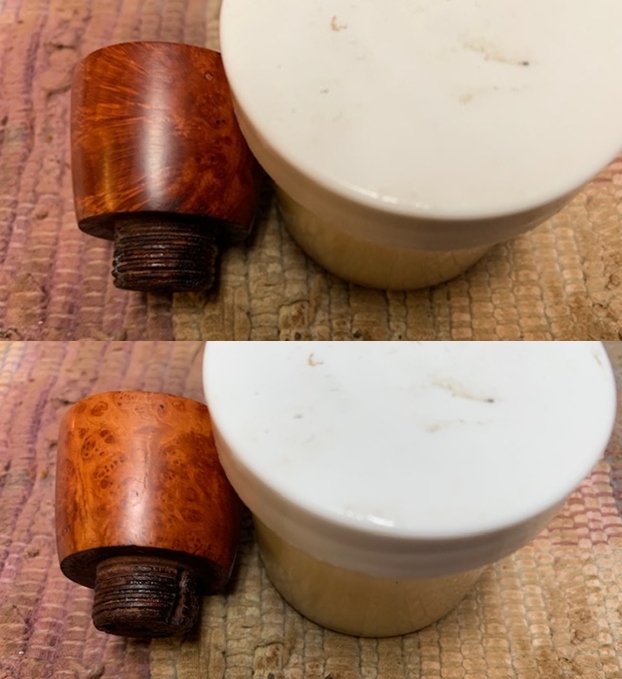 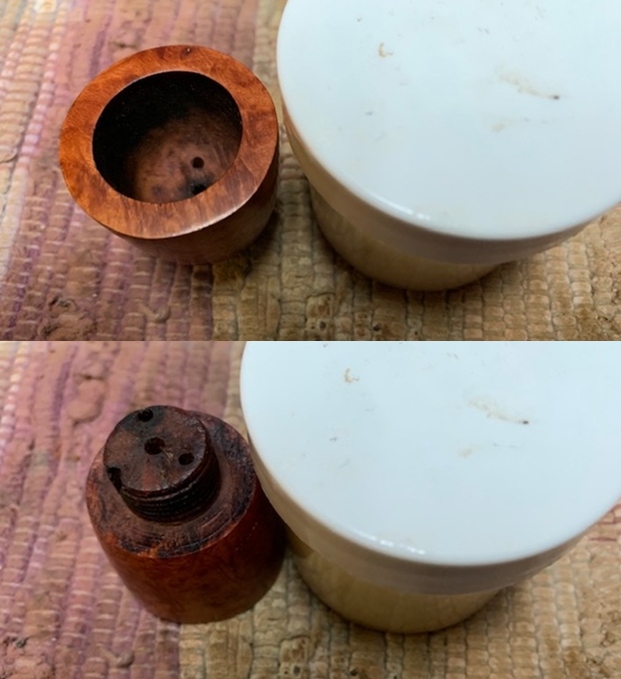 It was in very good condition so I polished the gutta-percha stem portion of the base with micromesh sanding pads – 1500-12000 grit pads. I wiped it down with Obsidian Oil after each sanding pad. I used Before & After Pipe Polish – both Fine and Extra Fine to further polish the stem. 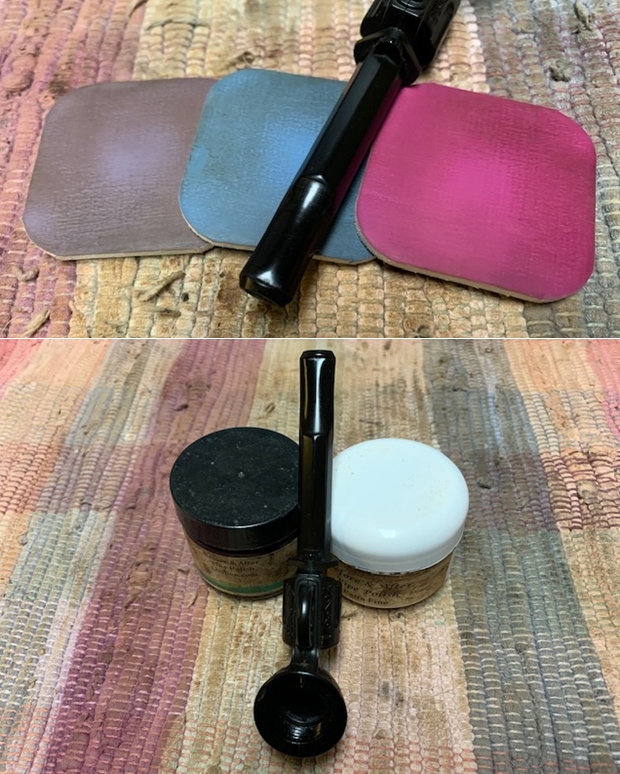 This Gutta-percha and Briar Bowled Revolver with a barrel shaped like a gun barrel is a great looking pipe now that it has been restored. I put the bowl back on the base and carefully buffed the pipe with Blue Diamond on the buffing wheel using a light touch on the briar. I gave the bowl multiple coats of carnauba wax on the buffing wheel and followed that by buffing the bowl with a clean buffing pad. I hand buffed the pipe with a microfiber cloth to deepen the shine. The finished Revolver Shaped Pipe fits nicely in the hand and feels great. Give the finished pipe a look in the photos below. The dimensions of the pipe are Length: 5 inches, Height: 2 ½ inches, Outside diameter of the bowl: 1 ½ inches, Chamber diameter: 7/8 of an inch. The weight of this pipe is 33g/1.16oz. Thanks for reading this blog and my reflections on the pipe while I worked on it. There are many more to come! 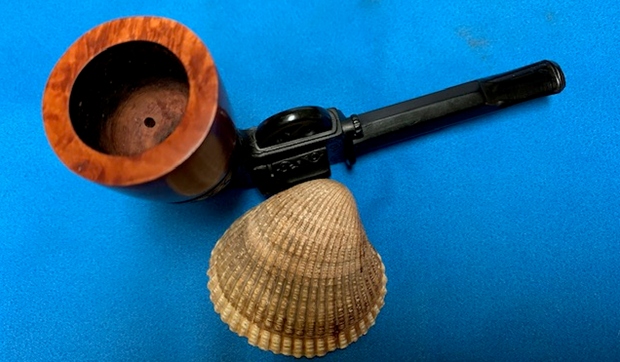 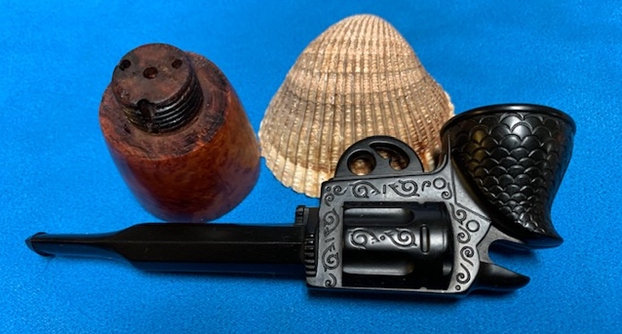