The next pipe on the table is another one that came to us from the group of pipes that Jeff and I purchased from a fellow in Copenhagen, Denmark on October 3, 2022. It is another Dunhill sandblast that is in good condition. It is stamped on a smooth panel on the underside of the shank with the shape number 577 followed by Dunhill [over] Tanshell. Next to that it is stamped Made in [over] England by the date number 2. After that it is stamped with a 2 in a circle [followed by] T for Tanshell. The stamping is clear and readable as noted above. The pipe has a mix of brown stains on a sandblast finish and some amazing grain that the shape follows well. The finish was dusty and oily around the nooks and crannies of the sandblast but otherwise fairly clean. The bowl had a moderate cake and there was some light lava on the sandblasted rim top or edges. The saddle stem was oxidized, calcified, dirty and had scratches, tooth marks and chatter ahead of the button. Jeff took photos of the pipe to show what it looked like before he started working on it.

The photos of the sides and heel of the bowl show the deep sandblast grain and the unique Tanshell coloured finish on the pipe. Even under the grime it is a real beauty. 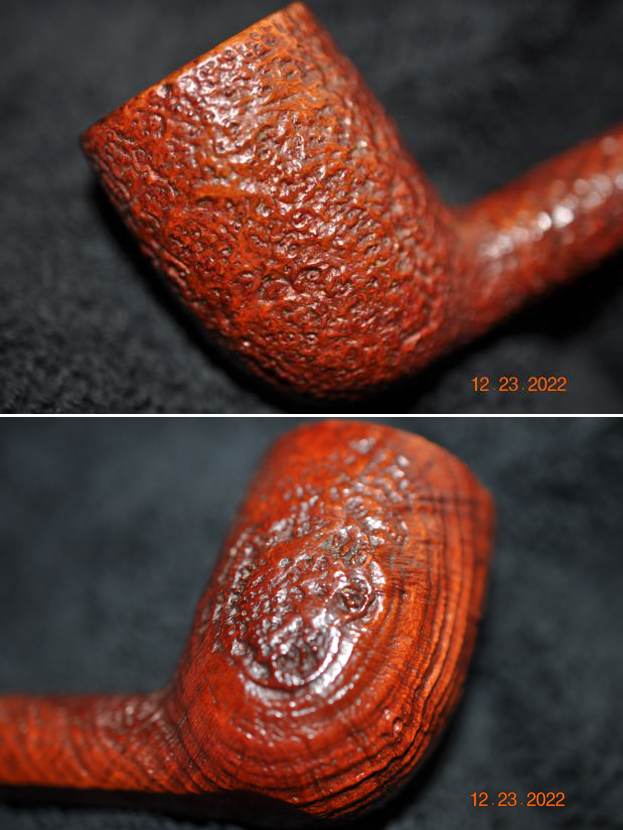 The stamping on the underside of the shank is shown in the photo below. It looks very good and faint but readable. It reads as noted and explained above. Jeff captured the detail in the photos below.

One of the first things I like to do is to unpack the stamping and understand each element in it. I turned to Pipephil helpful site (http://pipephil.eu/logos/en/dunhill/tanshell1.html). The stamping is interpreted as follows: The number 577 is the shape number for a Billiard. The Tanshell stamp refers to the finish which is corroborated the T at the end of the stamping. The size of the pipe 2 in a circle is a Group 2. The 2 following the D of England gives the date the pipe.

Pipephil also has some helpful dating keys on the site that are basically flow charts that you can walk through to date your pipe (http://pipephil.eu/logos/en/dunhill/cledat-en1.html). I turned to Part 1 of the Dating Key and followed the chart. This pipe has a 2 following the D in England. It is the same size as the D so that took me to the section on the chart below (column one) which instructed me that the pipe could be dated as being made posterior to 1954.

I followed the link following the “Your pipe is posterior to 1954. Narrow down your dating”. That took me to Page 2 of the dating key (http://pipephil.eu/logos/en/dunhill/cledat-en1a.html).   The second column (suffix 1…4) led me to the section with a 2 after the D in England. There was a directive for dating the pipe spelled out as follows: 1960 + suffix which gives the pipe a date of 1962.

I then turned to Pipedia’s section on Dunhill Root Briar to get a bit of background on the Dunhill finishes (https://pipedia.org/wiki/Dunhill#Root_Briar). I quote:

The first lot was distributed in 1952 (usually made using Sardinian briar). The prototype was called “Root Shell “, produced in 1951. The Tanshell is a light tan sandblast. Sardinian briar was used for this sandblast. There is a distinct contrast in the sandblasts using Sardinian as opposed to Algerian briar. The Sardinian is much denser and much harder. The resulting pattern, when blasted, is far more even and regular both in terms of the surface texture and the finish.

The TanShell was Dunhill’s fourth finish and its first major post-war line addition. Introduced in 1951/1952 the TanShell was a naturally stained sandblasted pipe made exclusively from Sardinian briar through the 1960s. The TanShell apparently was not simply a light stained Shell but rather was also the product of “certain processes [unrevealed] not previously employed.” Initially, it appears that the pipe was to be named the Root Shell and a stamp to that effect was ordered and received by Dunhill in May 1951. Ultimately, however, the name TanShell was settled upon but the stamp for the TanShell name was not received by Dunhill until the beginning of December. Thus while the Tanshell was in production in 1951 it appears that most if not all TanShells made in that year did not enter into retail distribution until 1952 and were given a 1952 date code. Loring, J. C., The Dunhill Briar Pipe, The Patent Years and After (self-published, Chicago, 1998).

I turned to work on the pipe itself. Jeff had done an amazing cleanup of the pipe. He reamed the light cake with a PipNet reamer and cleaned up that with a Savinelli Fitsall Pipe Knife. He scrubbed the internals of the bowl and stem with alcohol, cotton swabs and pipe cleaners. He scrubbed the externals with undiluted Murphy’s Oil Soap and rinsed the bowl off with running water. He soaked the stem in Briarville’s Pipe stem Deoxidizer and once it had soaked rinsed it off with warm water to remove the residual solution. He dried it off and rubbed it down to remove any oxidation that was still on the stem. The pipe looked very good when I received it. 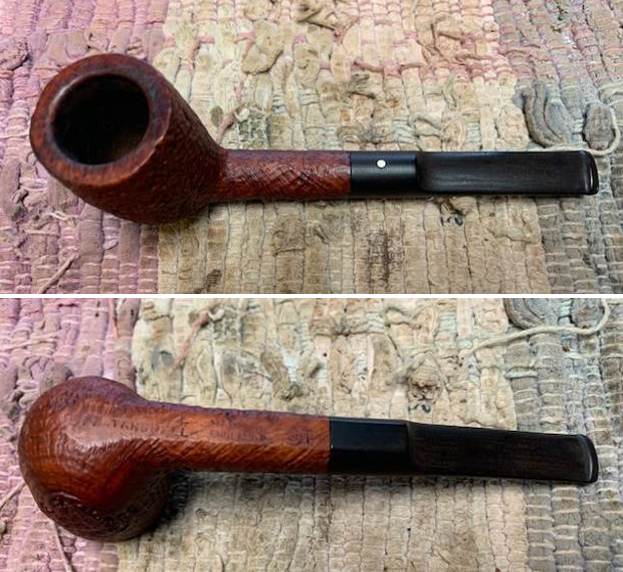 I took a photo of the rim top to show the condition. You can see the clean bowl. The stem came out looking quite good. There are some scratches, tooth marks and chatter on both sides ahead of the button.

I took a photo of the underside of the shank to show the stamping. The photo shows the stamping and is actually more readable in person.

The bowl was in such good condition that I had to do some minimal work with it. I rubbed the briar down with Before & After Restoration Balm. I worked it into the briar with my fingertips and a horsehair shoe brush to work it into the nooks and crannies of the sandblast finish. The product works to clean, enliven and preserve the briar. I let it sit for 10 minutes then I buffed it with a cotton cloth to deepen the shine. The briar really comes alive with the balm. 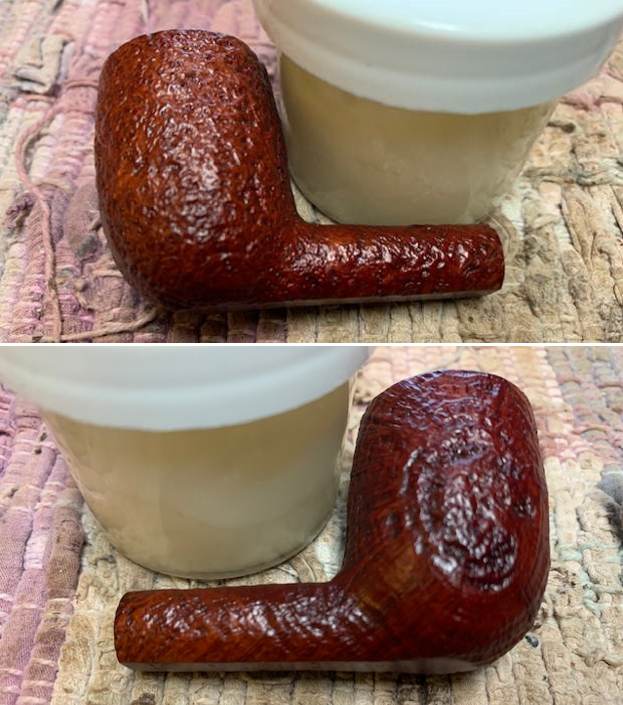 I set the bowl aside and turned to address the stem issues. I “painted” the surface of the stem with the flame of a Bic lighter. The heat lifted the tooth marks significantly. I filled in the marks that remained with clear CA glue. Once it cured I used a small file to flatten the repairs. I sanded them with 220 grit sandpaper to blend it into the surface of the stem. I started the polishing with a 400 grit wet dry sandpaper. 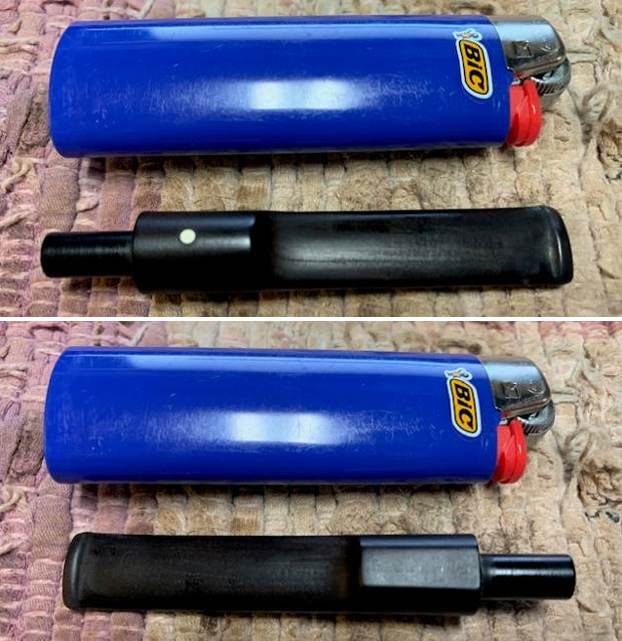 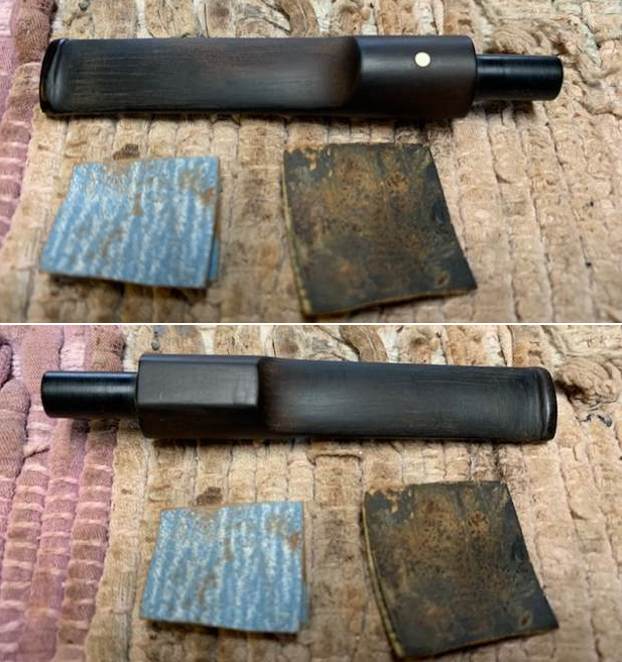 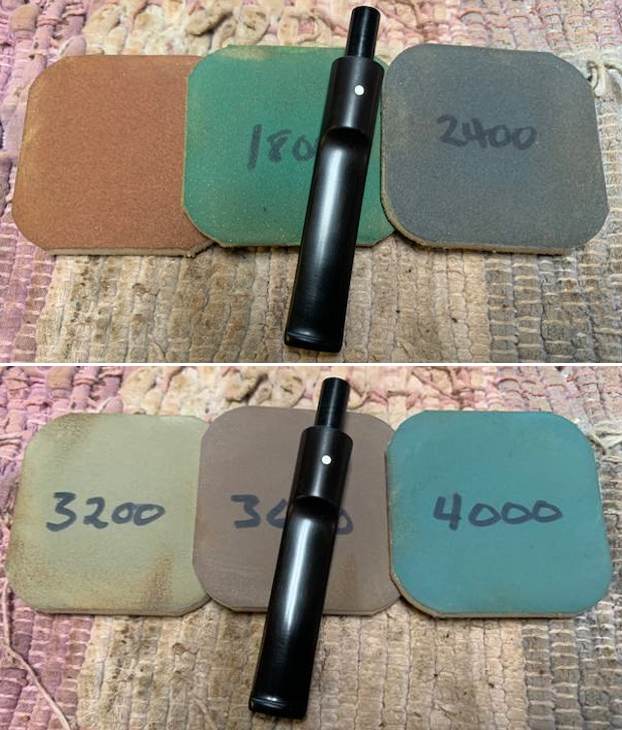 My daughter’s dog Frankie came for a visit this afternoon and took up his chair next to my desk. He is my little buddy and loves to hang out and watch me work on the pipes. As I turned my attention to finishing up this one he came to supervise!

This 1962 Dunhill Tanshell 577 Billiard with a Saddle Stem has a beautiful, unique Dunhill Sandblast finish that is very deep and craggy. The reddish brown finish highlights some great grain around the bowl and shank. It has some great rugged sandblast that Dunhill specialized in making. The polished black vulcanite taper stem adds to the mix. I put the stem back on the bowl and buffed the pipe with Blue Diamond on the buffing wheel being careful to not buff the stamping. I gave the bowl multiple coats of Conservator’s Wax and the stem multiple coats of carnauba wax on the buffing wheel and followed that by buffing it with a clean buffing pad. I hand buffed the pipe with a microfiber cloth to deepen the shine. The finished Dunhill Tanshell 577 Billiard is quite nice and feels great in the hand. Give the finished pipe a look in the photos below. The dimensions of the pipe are Length: 5 inches, Height: 1 ½ inches, Outside diameter of the bowl: 1 1/8 inch, Chamber diameter: ¾ of an inch. The weight of the pipe is .85 ounces/24 grams. Thanks for walking through the restoration with me as I worked over another beautiful pipe. If you are interested in adding it to your collection I will be adding it to the British Pipe Makers Section of the rebornpipes store. Thanks for your time. 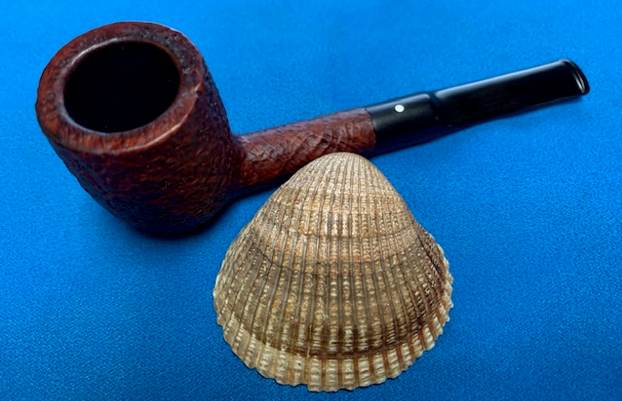 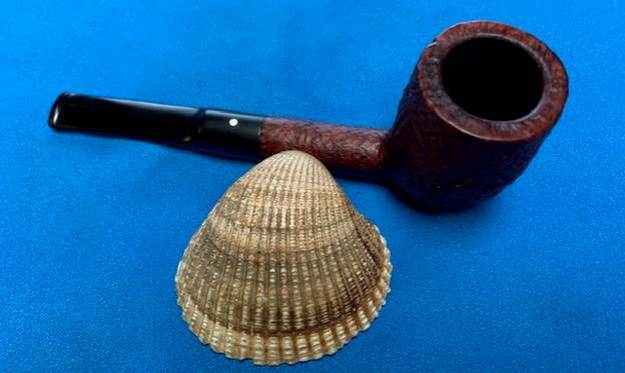 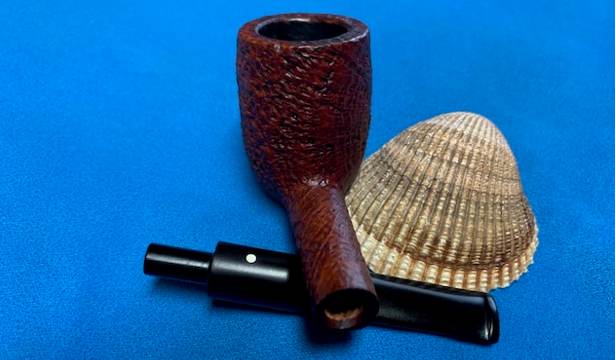 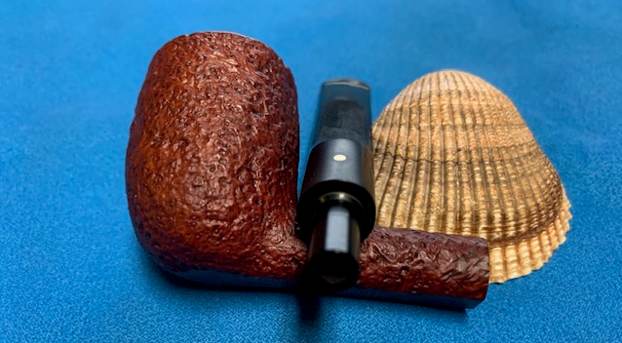