The next pipe is a really neat looking deeply sandblasted Comoy’s Made Woodstock (Zulu) with a vulcanite taper stem. The angle of the bowl, shank and stem on the pipe made it one that was made to hold in your hand. It is quite light weight for its size and the blade on the stem is thin and looks comfortable. We picked up this pipe in a group of pipe we purchased from a fellow in Los Angeles California. It is stamped on a smooth panel on the underside of the shank and reads The [over] Everyman [over] London Pipe [over] Made in London[over] England. Toward the shank/stem junction it is stamped with the shape number 88. The exterior of the bowl looked clean and way too shiny. There was definitely a coat of varnish on the briar. There was a heavy cake in the bowl and an eruption of thick lava on the rim top and beveled inner edge of the bowl. It was hard to know the condition of the rim top and rim edges because of the grime and thickness of the cake and lava. The cleaning would make it very clear! The stem was dirty, oxidized and calcified with deep tooth marks and chatter on both sides and on the underside of the button surface. Jeff took photos of the pipe to give a clear picture of what we were up against with this pipe.

He captured the cake in the bowl and the thick eruption of lava on the rim top and edges exceptionally well in the next photos. It was very clear that it was an exceptional smoker! The stem is lightly oxidized and shows the tooth marks and chatter on both sides ahead of the button.

Jeff captured some of the beauty of the shape and the rugged sandblast grain in the next photos. It is quite stunning. 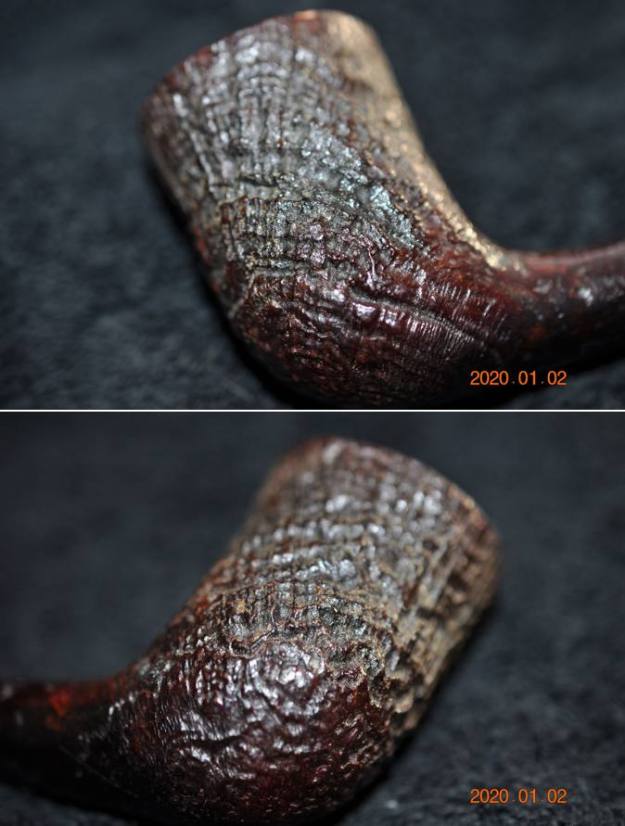 He took photos of the stamping on the underside of the shank. It is clear and readable as noted above. He also capture the three bar logo on the left side of the taper stem. 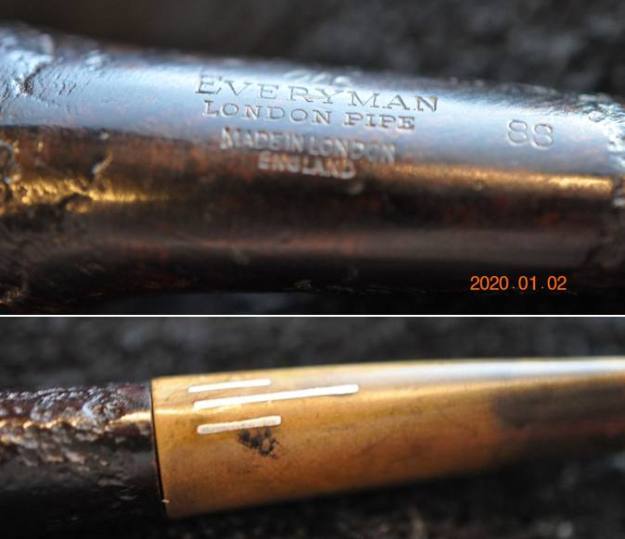 I turned to pipephil’s site (http://pipephil.eu/logos/en/logo-e4.html) to confirm what I knew about the brand being made by Comoy’s. It did but did not give a whole lot of other information.

I turned then to Pipedia (https://pipedia.org/wiki/Comoy%27s). I found a catalogue page there that listed the Everyman. It reads: “This wonderful moderate priced pipe is the largest selling branded English pipe in the world.”

I turned to the shape chart that was also linked on the Comoy’s article to see how they describe a 88 (https://pipedia.org/index.php?title=Comoy%27s_Shape_Number_Chart). There was no 88 listed, only an 87 which was described as a Woodstock with an oval stem and a slight bend.

Now it was time to work on the pipe. It is really a beautiful piece. Jeff had done a great cleanup on the pipe. He reamed the bowl with a PipNet pipe reamer and followed up with a Savinelli Fitsall pipe knife to remove the cake. He scrubbed out the mortise and the airway in the shank and the stem with alcohol, cotton swabs and pipe cleaners. He scrubbed the bowl exterior with a tooth brush and Murphy’s Oil Soap to remove the grime on the finish of the bowl and the lava from the rim top. He rinsed it under running water. One of the benefits of this scrub is that it also tends to lift some of the scratches and nicks in the surface of the briar. He dried it off with a soft cloth. He cleaned the internals and externals of the stem with alcohol, pipe cleaners and cotton swabs. He soaked the stem in Briarville’s Pipe Stem Deoxidizer and rinsed it off with warm water and cleaned out the airway in the stem with alcohol, pipe cleaners and cotton swabs. I took photos of the pipe as I saw it when I put it on the table. There is definitely a varnish coat on the bowl that makes the briar very shiny and to me obscures the nooks and crannies of the deep sandblast finish. 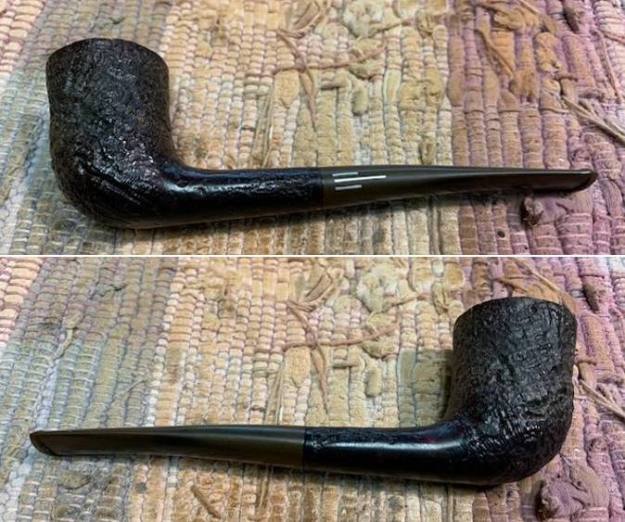 I took photos of the rim top and stem to show the condition. The rim top and beveled edge looked amazing. The stem was vulcanite and there were tooth marks and chatter on both sides ahead of the button and on the button surface as well.

The stamping on the underside of the shank is clear and readable. It reads as noted above. The three silver coloured inset bars on the left side of the taper stem are also visible.

I removed the stem from the shank and took a photo to give a sense of the proportions. You can also see the bubbling in the varnish coat on the sandblast side of the bowl. 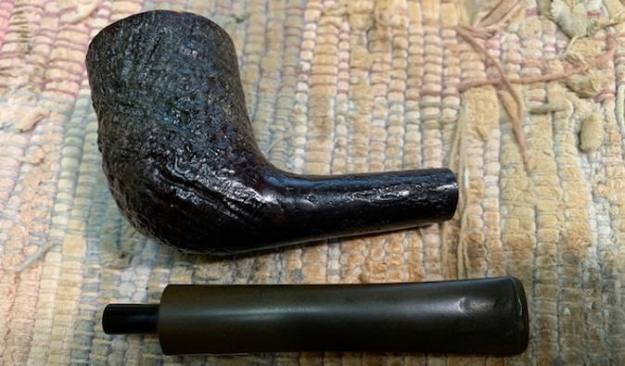 I used a brass bristle wire brush to work over the bubbly finish on the bowl and rim. Once it was loosened I wiped it down with acetone on a cotton pad to try and remove the varnish coat from the depths of the finish. I was able to remove it from the surface and the crevices in the blast for the most part. It looked better. 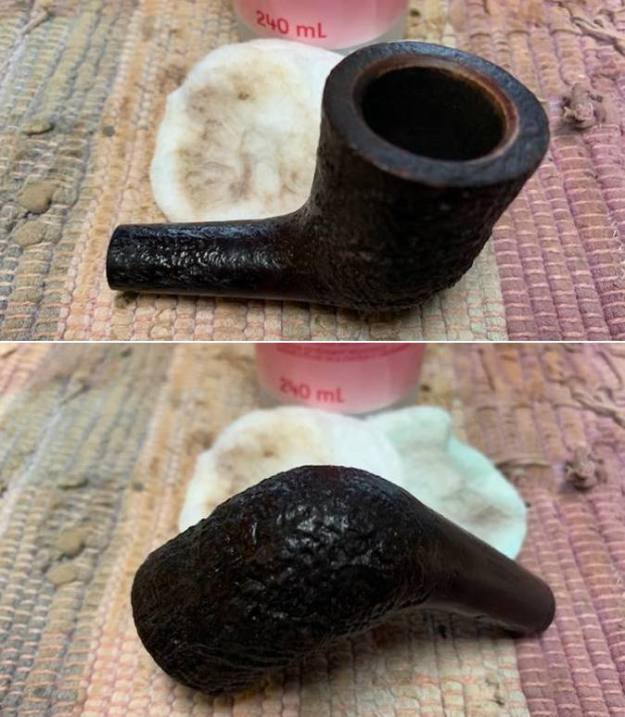 I rubbed the bowl and shank down with Before & After Restoration Balm. I worked it into the surface of the bowl sides and shank with my fingertips and a horsehair shoe brush to clean, enliven and protect the briar. I let the balm sit for 10 minutes, then buffed with a cotton cloth to raise the shine. The Balm did its magic and the grain stood out on the briar. 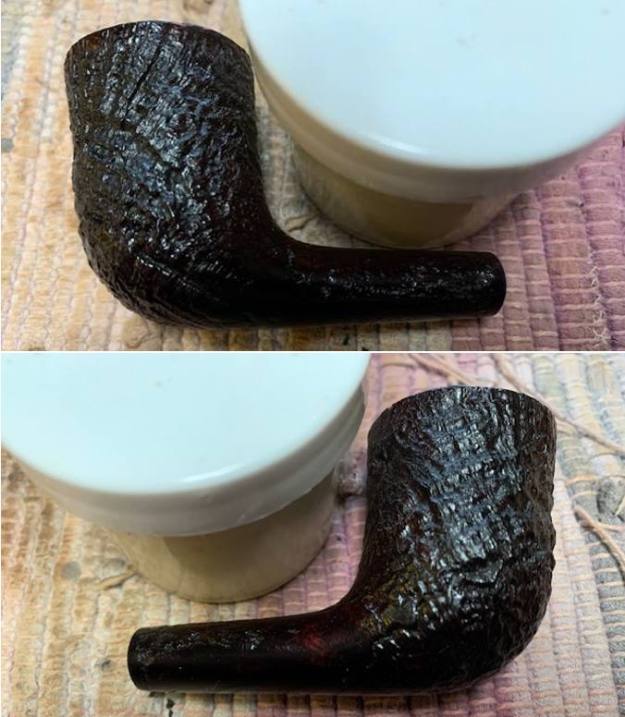 I set the bowl aside and turned to the stem. I “painted” the surface of the stem with the flame of a lighter and was able to raise most of the tooth marks. I filled in those that remained with some clear CA Glue. I set the stem aside to let the repairs cure.

When they had cured I used a small flat file to flatten out the repairs and reshape the button edge on both sides. I sanded the repaired areas and the rest of the stem with 200 grit sandpaper to blend them in and to remove the remaining oxidation. I started the polishing with 400 grit wet dry sandpaper. 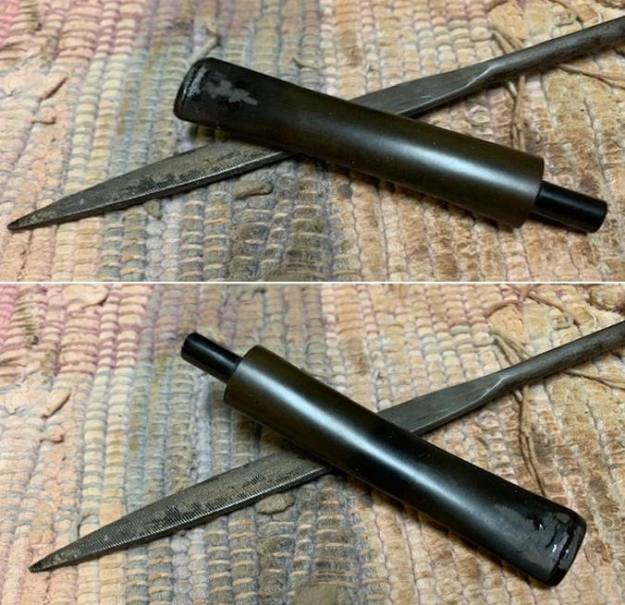 This Comoy’s Made The Everyman London Pipe 88 Woodstock with a vulcanite taper stem is a rugged sandblast pipe with a flowing shape that looks great. The rich browns of the contrasting stain makes the nooks and crannies of the blast come alive with the polishing and waxing. I put the stem back on the bowl and carefully buffed the pipe with Blue Diamond on the buffing wheel using a light touch on the briar. I gave the bowl multiple coats of Conservator’s Was and the stem multiple coats of carnauba wax on the buffing wheel and followed that by buffing the entire pipe with a clean buffing pad. I hand buffed the pipe with a microfiber cloth to deepen the shine. The finished The Everyman London Pipe Woodstock really is a beauty and fits nicely in the hand and looks very good. Give the finished pipe a look in the photos below. The dimensions of the pipe are Length: 5 ½ inches, Height: 1 ¾ inches, Outside diameter of the bowl: 1 ¼ inches, Chamber diameter: 7/8 of an inch. The weight of the pipe is 1.09 ounces/31grams. This pipe will soon be on the British Pipe Makers section of the rebornpipes store if you would like to add it to your collection. Thanks for reading this blog and my reflections on the pipe while I worked on it. There are many more to come! 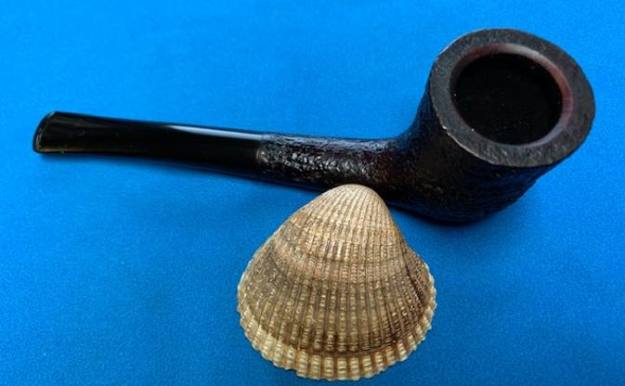 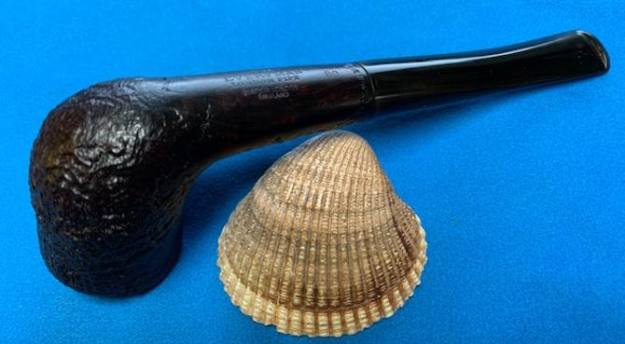 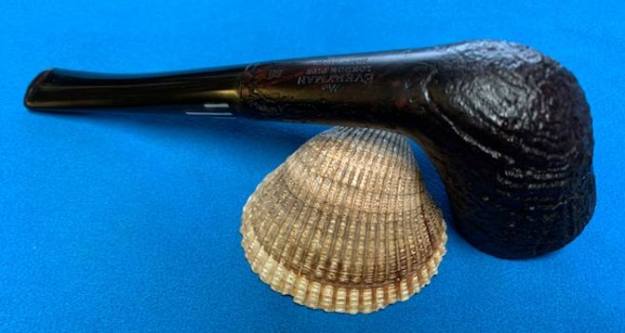 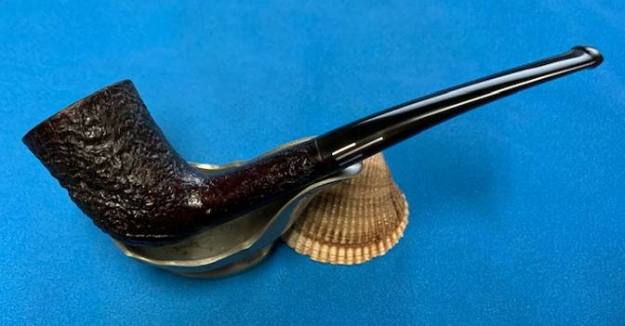 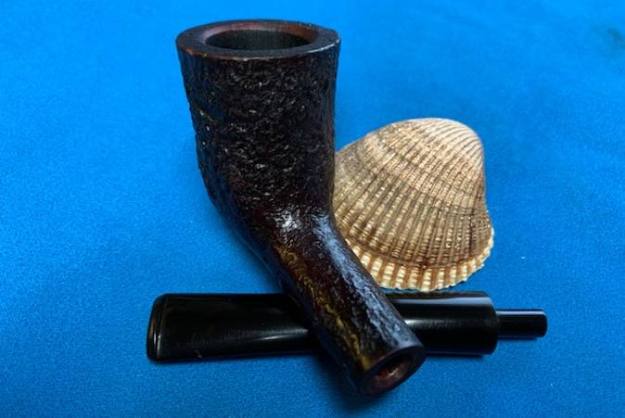