This white Billiard with a Tortoise Shell acrylic stem came to us from an online auction early in 2020 from Columbus, Michigan, US. From the title of the blog you know that I am not a fan of painted pipes. That is probably because I have come to understand that the briar under the paint is quite often horrible and filled with putty and flaws. Paint covers a multitude of “sins” and I am sure this is no exception. Added to that the pipe is also meerschaum lined. What made me pause was the great looking tortoise shell stem and the gold shank band that give the pipe a touch of class. The painted surface was in good condition with no nicks of scrapes. The rim top had a bit of darkening on the meer lining and a little on the paint but even that was not too bad. The bowl did not have a cake which was also a bonus that helped. It is stamped on the left side of the shank and reads Jeantet [over] Brummer and has the shape number 944 stamped on the underside of the shank. The stem has the Jeantet logo on the left side – a J in an oval. On the right side it is stamped Hand Cut and on the underside it is stamped FRANCE. The Tortoise Shell stem is quite pretty but upon examination there is a round bite through on the top side just ahead of the button. Jeff and I had picked up several pipes that the previous owner had customized by filling in the slot with putty and drilling a hole in the top. It was obviously the owner’s attempt at making a “P-lip” style smoker. We are pretty sure this was one of them. In any case it would need to be reworked – opening the slot and filling in the hole on the top side. Jeff took some photos of the pipe before he worked on it. 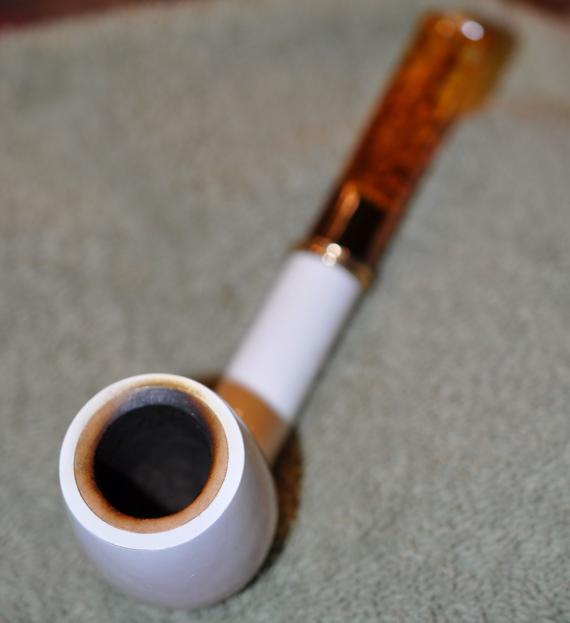 Jeff took photos of the bowl and rim top to show the meer lining and the condition of the rim and bowl. It has some darkening and light lava on the back side but otherwise looked good. He also took photos of the stem to show the hole in the top side. You cannot see it but there is a plug in the slot on the stem end that will need to be removed. Other than that the stem was in excellent condition. 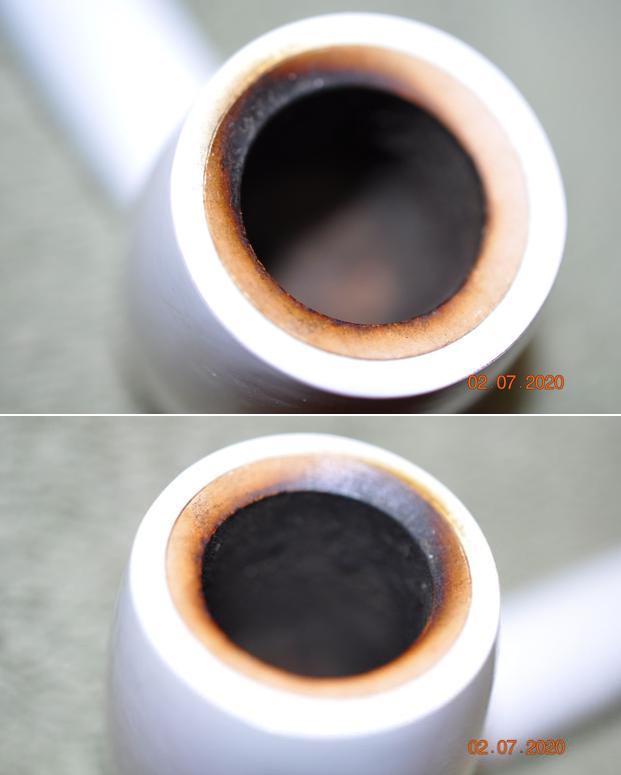 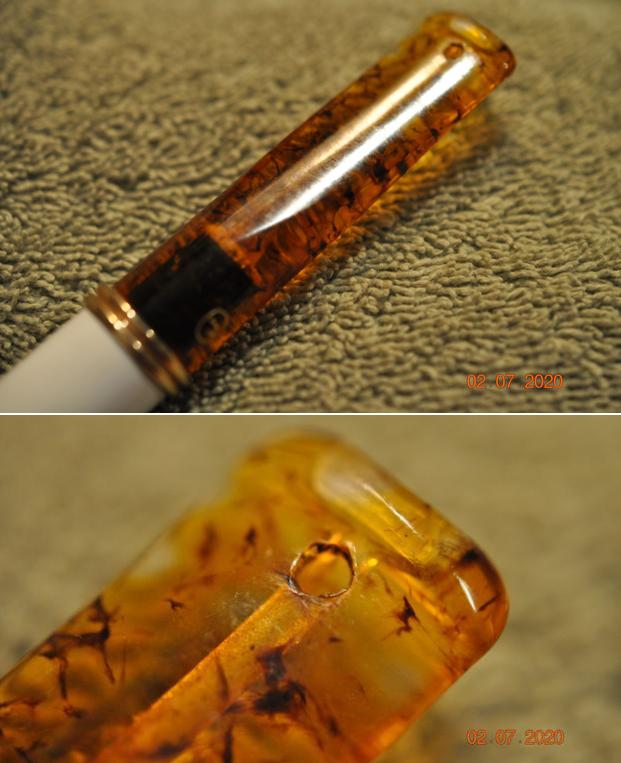 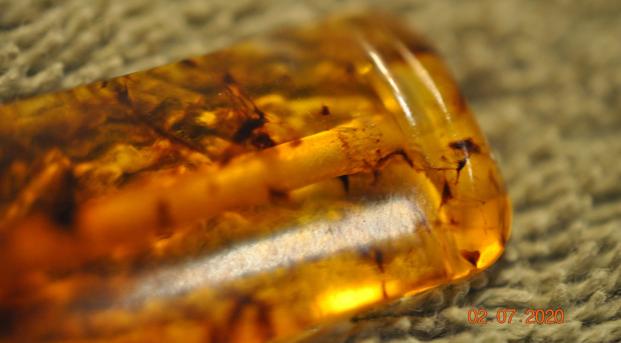 Jeff removed the stem from the shank to show the stepped down Delrin tenon and the gold band on the shank end. It is a pretty looking pipe and the shank is surprisingly clean looking. 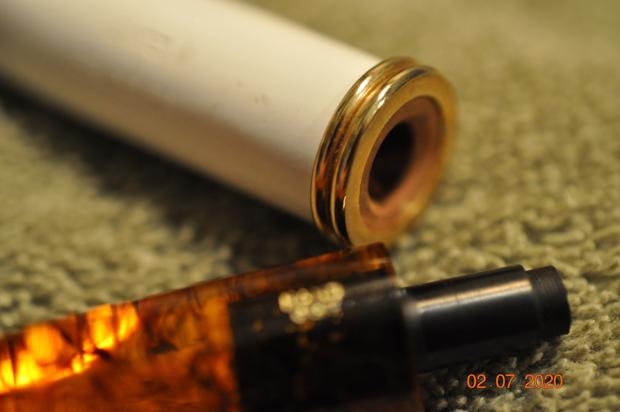 He took photos of the bowl and heel to show the condition of the painted surface. It is quite remarkable that it is in such great condition and appears to have been very well cared for by the previous pipeman or woman. 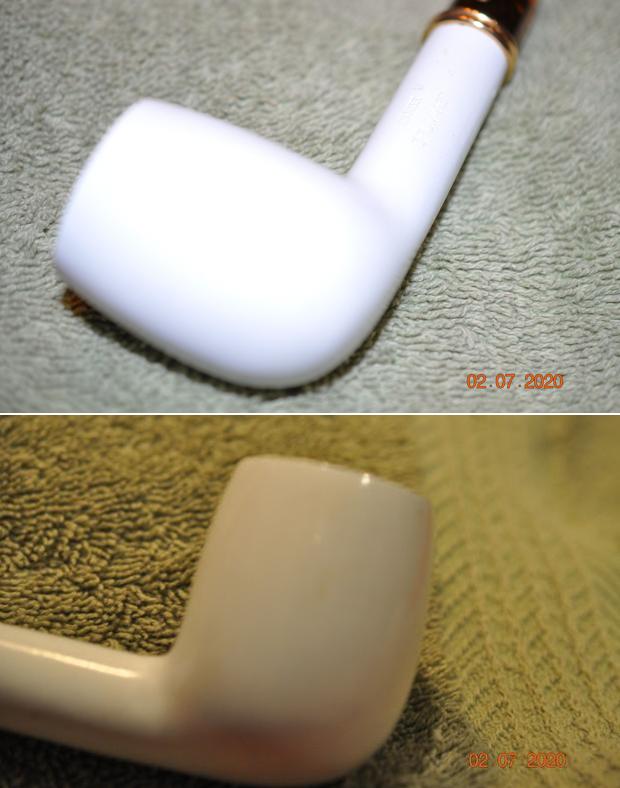 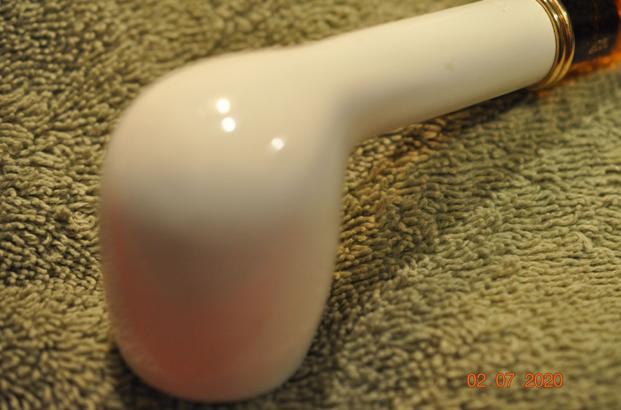 Jeff took photos of the stamping on the shank and the logo on the stem. They read as noted above and were in excellent condition. 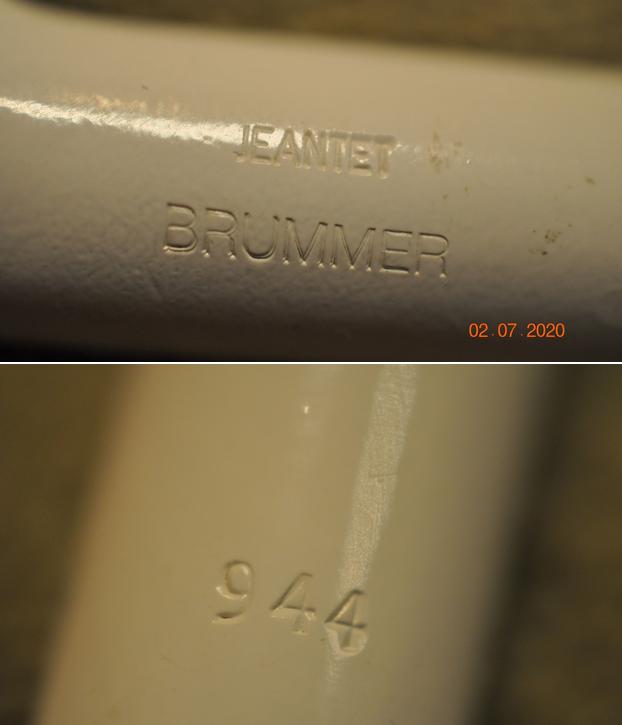 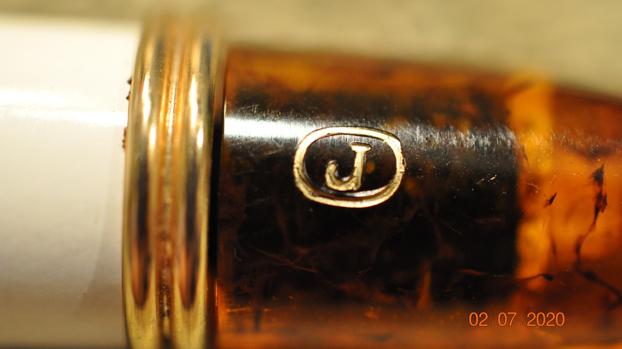 I turned to Pipephil’s site to see what I could learn about the Brummer line of Jeantet pipes (http://pipephil.eu/logos/en/logo-jeantet.html). There was nothing specific about that line though was a brief summary of the history. I quote from the top bar below:

The company joined the Cuty-Fort Entreprises group (Chacom, Ropp, Vuillard, Jean Lacroix…) in 1992. In 2010 it dropped out and the brand isn’t part of the group any more. The label is owned by the Jeantet family (Dominique Jeantet) again. The pipe production is discontinued. Dominique Jeantet retired in 2000. See also: Antidote, Duke of Kent, Grand Duke, Hermes, Sir Bruce, Sir Duke

I turned to Pipedia to get a more detailed history of the brand (https://pipedia.org/wiki/Jeantet). There as a brief history there that I have reproduced below.

The firm of the Jeantet family in Saint-Claude is first mentioned as early as 1775. By 1807 the Jeantets operated a turnery producing in particular wooden shanks for porcelain pipes and wild cherry wood pipes. The firm was named Jeantet-David in 1816, and in 1837 the enterprise was transformed into a corporation as collective name for numerous workshops scattered all over the city.

The manufacturing of briar pipes and began in 1858. 51 persons were employed by 1890. Desirous to concentrate the workers at a single site, the corporation began to construct a factory edifying integrated buildings about 1891 at Rue de Bonneville 12 – 14. This took several years. In 1898 Maurice Jeantet restructured the business. He is also presumed to enlarge Jeantet factory purchasing a workshop adjoining southerly. It belonged to the family Genoud, who were specialized in rough shaping of stummels and polishing finished pipes. (In these times it was a most common procedure to carry goods from here to there and back again often for certain steps of the production executed by dependent family based subcontractors. Manpower was cheap.)

Jeantet was transformed to a corporation with limited liability in 1938. By that time a branch workshop was operated in Montréal-la-Cluse (Ain), where mainly the less expensive pipes were finished. 107 employees – 26 of them working from their homes – were counted in Saint-Claude in 1948 and 18 in the Ain facility.

The Saint-Claude factory was considerably modernized by ca. 1950 installing (e.g.) freight elevators. In 1952 the southern workshop was elevated. 80 workers were employed in 1958. The factory covered an area of 2831 m²; 1447 m² of the surface were buildings.

The climax of the pipe production was reached around 1969, when thirty to thirty five thousand dozens of pipes were made by 72 workers (1969). But then the production continuously dwindled to only six or seven thousand dozens in 1987 and only 22 workers were still there. Even though, around 1979 a very modern steam powered facility for drying the briar had been installed in the factory’s roofed yard.

Yves Grenard, formerly Jeantet’s chief designer and a great cousin of Pierre Comoy, had taken over the management of Chapuis-Comoy in 1971. Now, to preserve the brand, the Jeantet family went into negotiations with him, and resulting from that Jeantet was merged in the Cuty Fort Group (est. 1987 and headed by Chacom) in 1988 along with the pipe brands of John Lacroix and Emile Vuillard. Chacom closed the Jeantet plant, and the City of Saint-Claude purchased it in 1989. After alternative plans failed, the buildings were devoted to wrecking. The southerly workshop was wrecked before 1992.

Today Jeantet pipes were produced as a sub-brand by Chapuis-Comoy who’s mainstay is Chacom of course.

Jeff carefully cleaned up this Jeantet Brummer Painted Billiard with a Tortoise Shell stem with Murphy’s Oil Soap and a tooth brush to remove the grime on the rim top and bowl sides. He cleaned up the inside of the bowl with a Savinelli Fitsall Pipe Knife, scraping away the light cake on the bowl walls. He scrubbed the internals of the shank and stem with pipe cleaners, cotton swabs and alcohol until the airways were clean and the pipe smelled fresh. The pipe looked much better once the bowl and stem were clean. The plug in the slot of the stem was removed and the hole in the top was cleaned up as well. It was ready to repair when it arrived in Vancouver. I took photos of the pipe before I started my work on it. 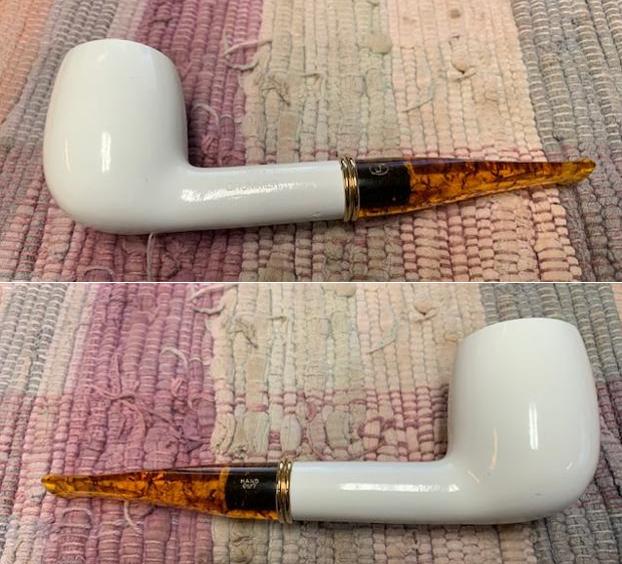 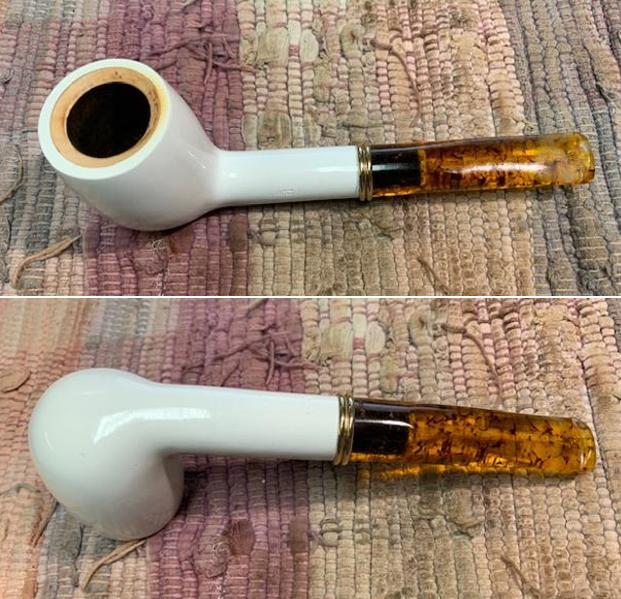 I took close up photos of the meer lined bowl and the rim top to show the condition. I also took photos of both sides of the stem to give a sense of the damage to the top side and the good condition of the underside. 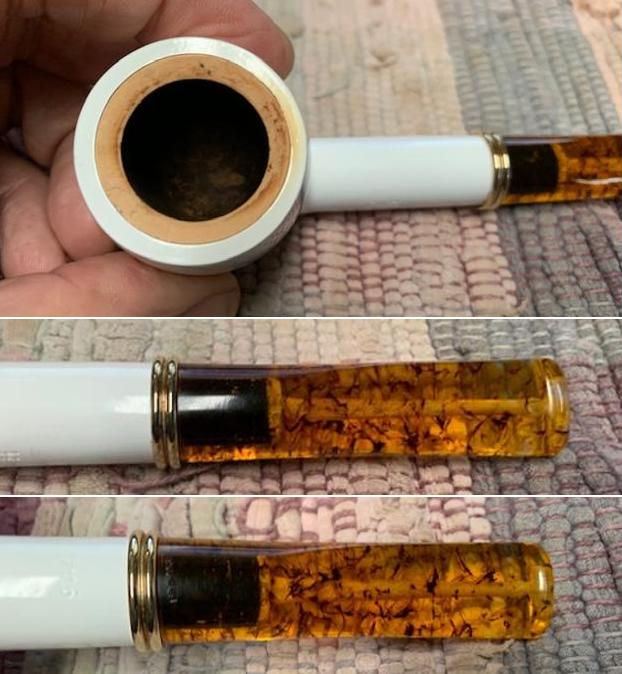 I took photos of the stamping on the left side of the shank and stem and the right side of the stem. It reads as noted above and is very clear and readable. 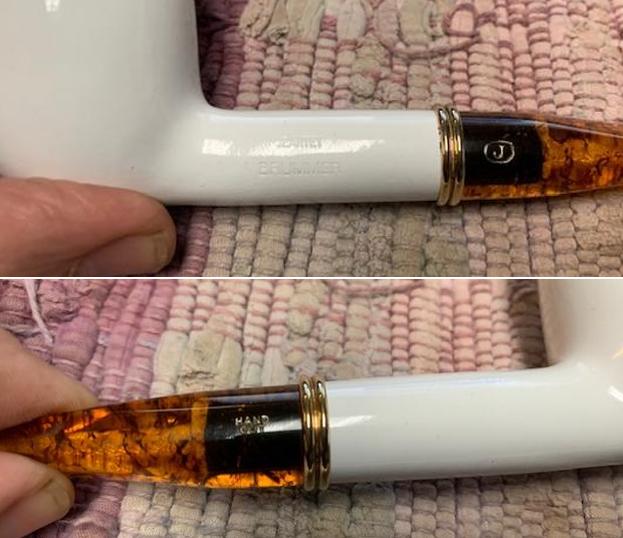 I took the stem off the shank and took photos of the pipe to give a sense of its beauty and proportions. 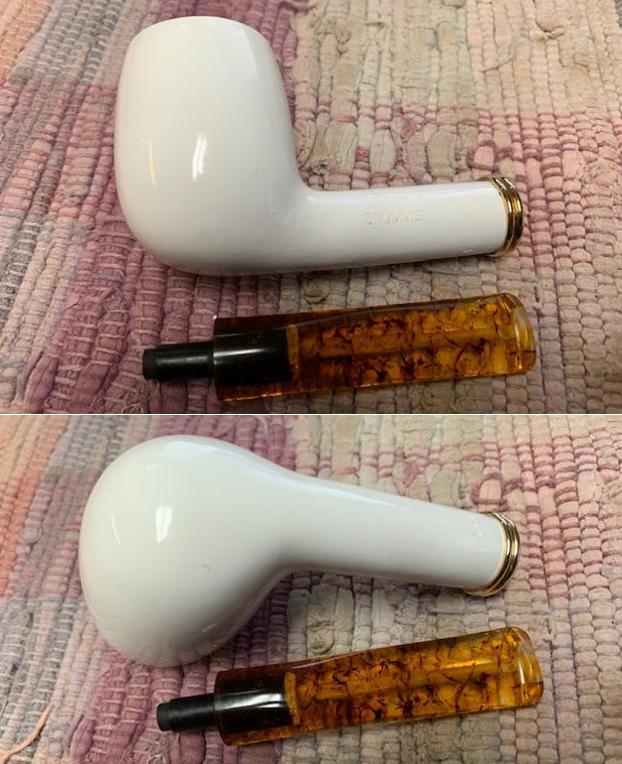 The bowl of the pipe was in excellent condition and did not need any work. The only major issue on the pipe was the hole in the top of the stem. I greased a pipe cleaner with Vaseline and slid it into the slot under the hole in the stem top. I filled in the hole with clear super glue. Once the glue cured it was a white spot that needed more work to blend into the stem surface. Once the repair cured I sanded the repair with 220 grit and polished it with 400 grit wet dry sandpaper. 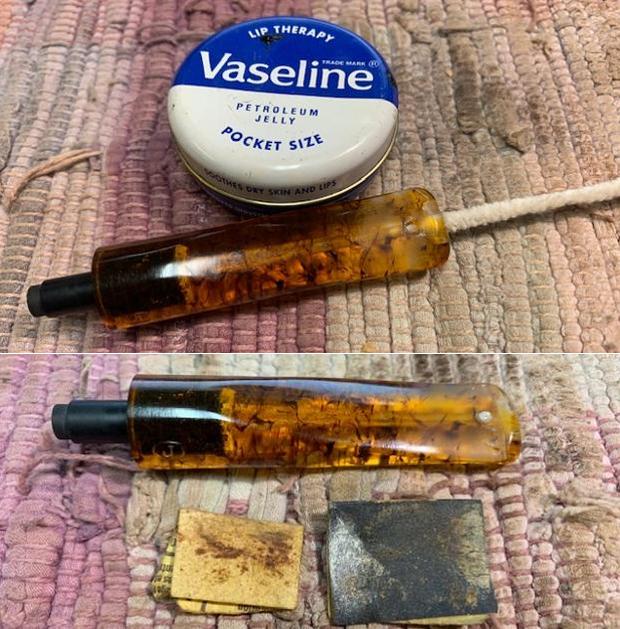 I polished out the tooth chatter on the underside of the stem with the same sandpaper and started polishing it.

I used a dark brown and black stain pen to approximate the feathery wisps of the tortoise shell finish of the acrylic. I gave the repair a top coat of clear CA glue and let it cure. I sanded the spot smooth. 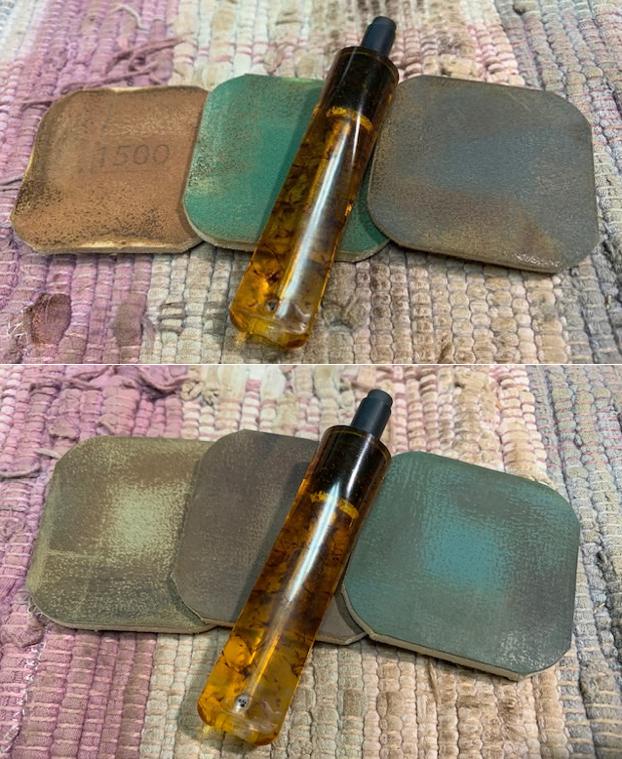 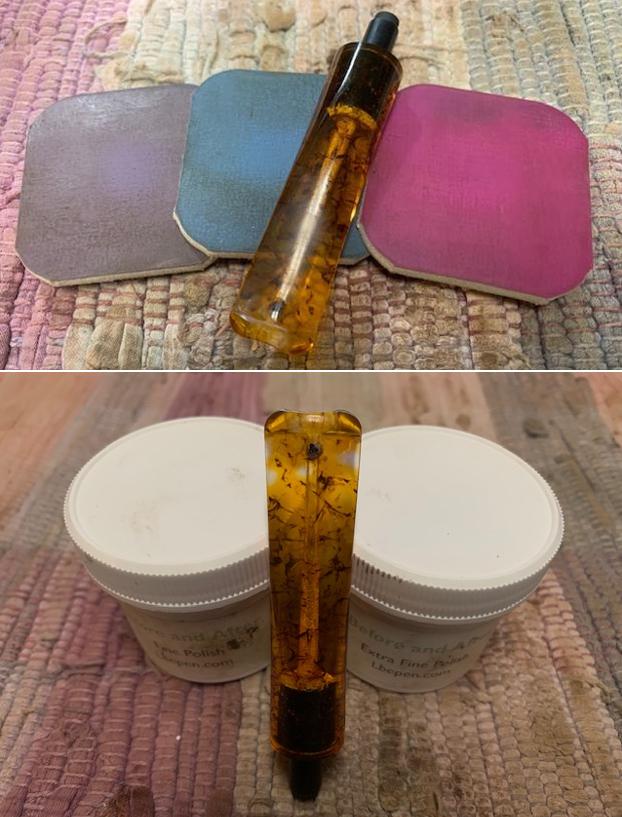 I lightly buffed the bowl and stem with Blue Diamond on the buffing wheel and gave it a coat of Conservator’s Wax to seal and protect it. The pipe took on a deep shine in the painted briar and in the tortoise shell acrylic stem. The twin ring gold band also looked very good. It was an interesting looking pipe. The dimensions of the pipe are Length: 6 inches, Height: 2 inches, Outer Diameter of the bowl: 1 ¼ inches, Diameter of the chamber: ¾ of an inch. The weight of the pipe is 60 grams/2.12 oz. The photos below show the finished pipe. It is a surprisingly nice looking pipe. If you would like to add it to your collection I will be adding it to the French Pipe Makers section of the rebornpipes store. Send me a message or an email. Thanks for reading the blog. It was an interesting restoration. 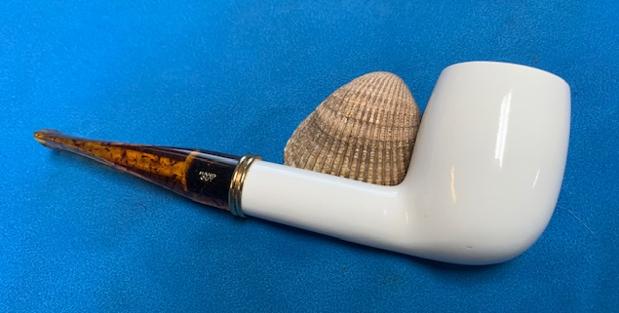 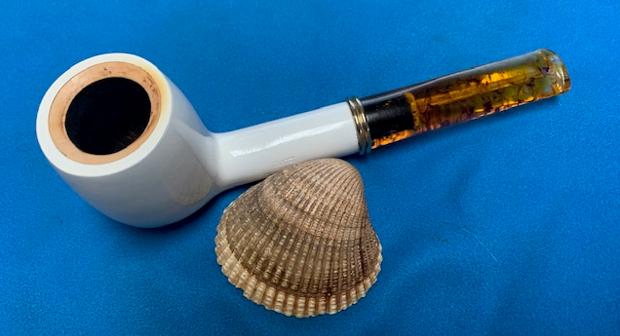 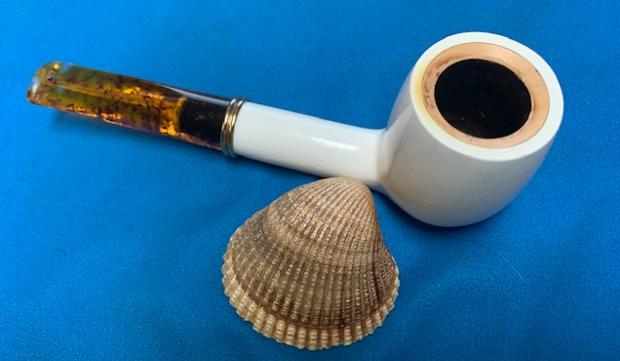 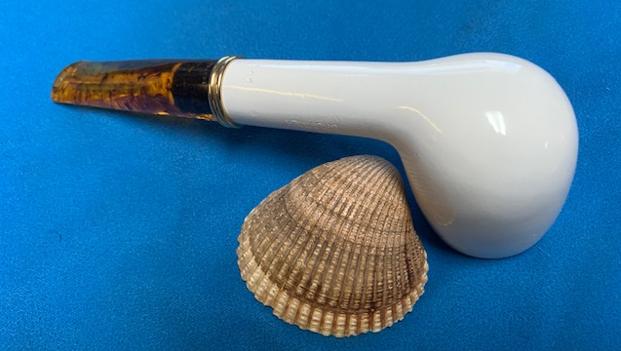 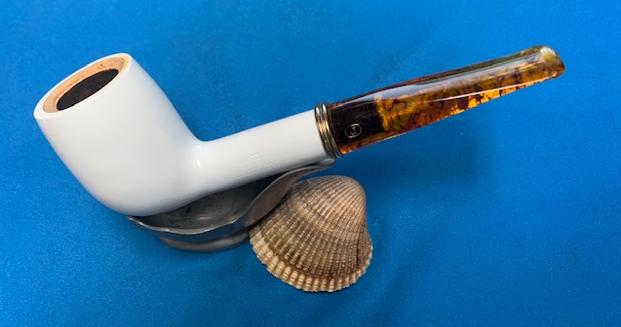 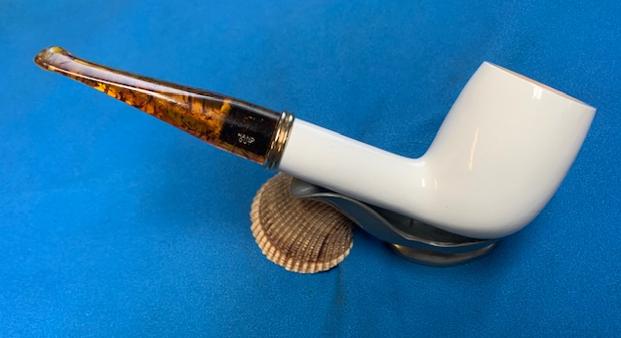 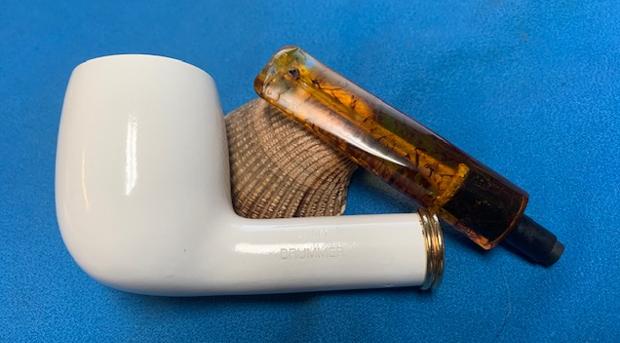 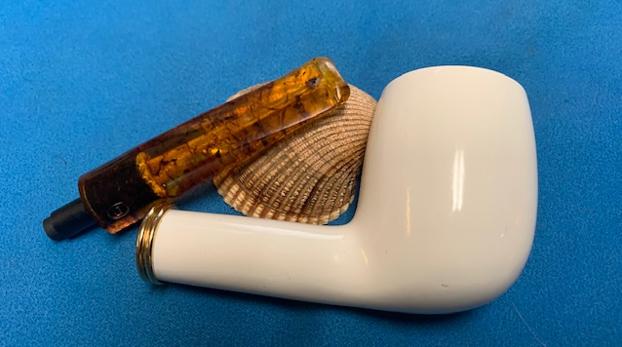 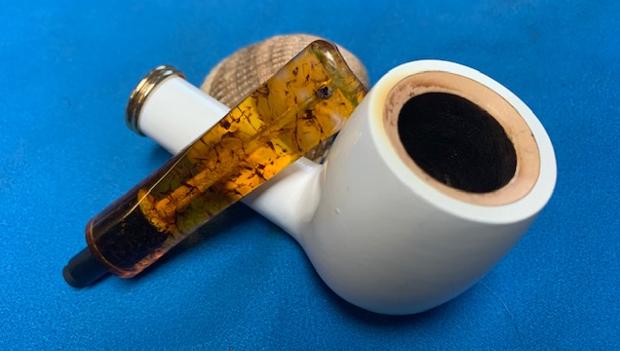 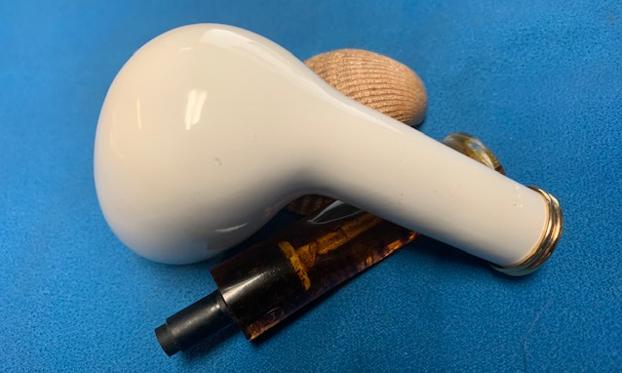 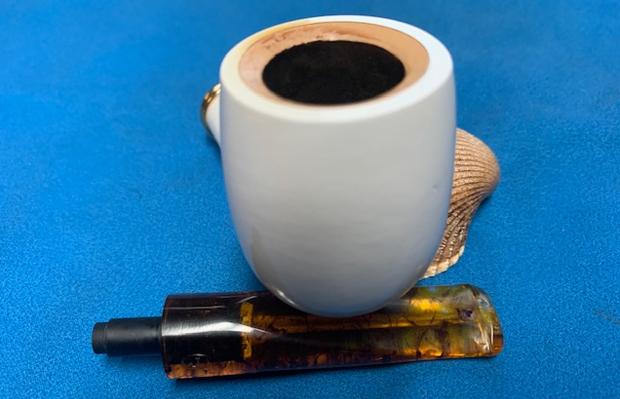 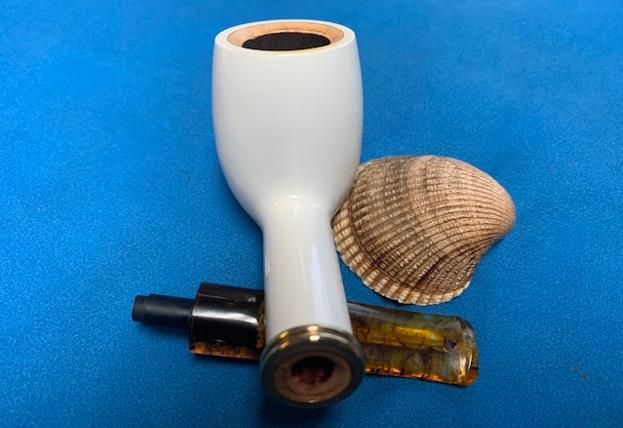