The next pipe on the work table is one that came to us from a pipe hunt that Jeff or I did and we cannot remember where and when we picked it up. Our memory is that it has been sitting around for a while waiting to be restored. It does not have and stamping on the left side of the shank. On the right side it reads Made In [over] London, England. The vulcanite saddle stem has no identifying marks that help with identification. The pipe has an interesting mix of grain – swirls, birdseye and cross grain around the bowl and long shank. When the pipe arrived here it was very clean. Jeff had done his usual thorough job in removing all of the cake in the bowl and the lava on the rim top. He had reamed the bowl with a PipNet Pipe Reamer and cleaned up the remnants with a Savinelli Fitsall Pipe Knife. He took the cake back to bare briar so we could check the walls for damage. He scrubbed the exterior of the bowl with Murphy’s Oil Soap and a tooth brush to remove the grime on the bowl and rim and was able to remove the lava and dirt. He cleaned out the interior of the bowl and shank with pipe cleaners, cotton swabs and alcohol until they came out clean. He cleaned the stem with Soft Scrub to remove the grime on the exterior and cleaned out the airway with alcohol, cotton swabs and pipe cleaners. I took photos of the pipe before I started my part of the work. 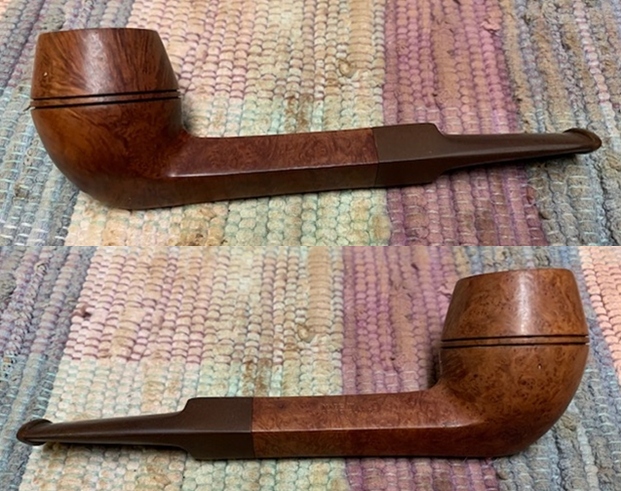 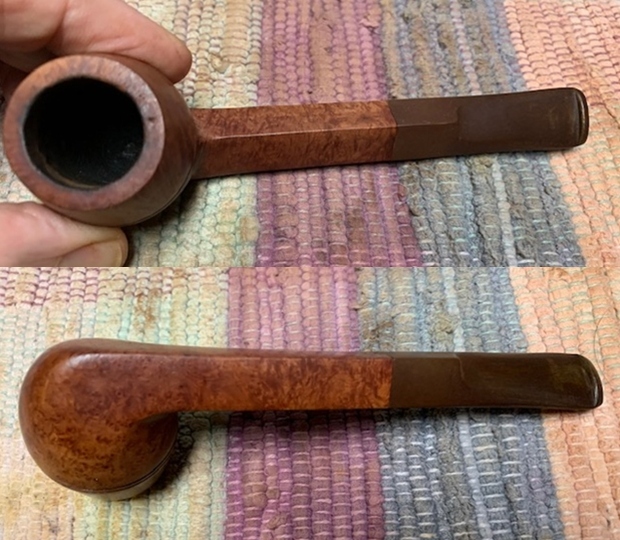 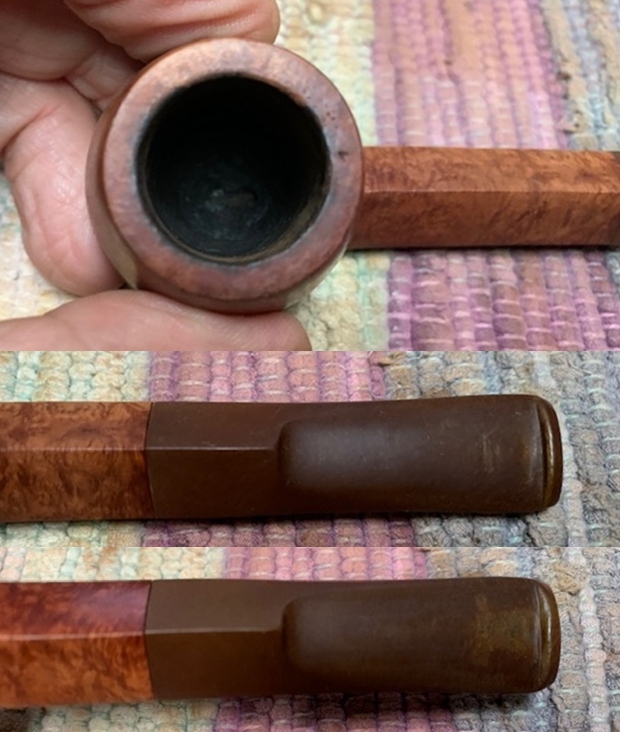 I took photos of the stamping on the left side of the shank. The stamping is clear and reads as noted above.

I removed the stem from the shank and took a photo of the parts to give an idea of the flow and form of the pipe. It is a nice looking Bulldog. 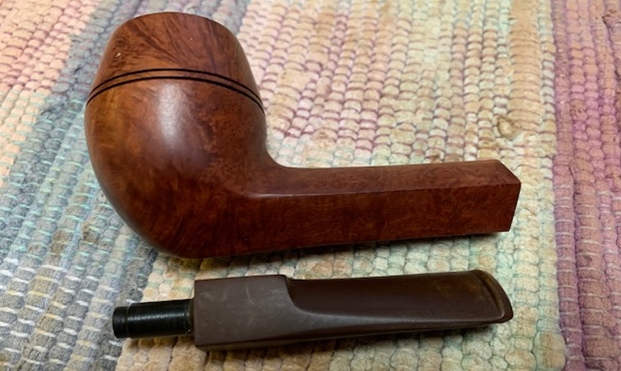 The pipe reminded me of another long shank Bulldog I had restored previously so I turned to the blog about that restoration and reread the article. That pipe had been stamped ROTA’S, Made in London, England and was a Bulldog (https://rebornpipes.com/2020/04/20/restoring-a-bit-of-a-mystery-rotas-made-in-london-england-long-shank-bulldog/). I have included a photo of the finished sandblast pipe below.

When I worked on above ROTA’S Pipe I recalled thinking that it reminded me of another pipe. I quote what I wrote in that blog below.

While I was working on the pipe there was something about the shape, particularly the cap above the twin rings and the way the bottom of the bowl flowed into the diamond shank that reminded me of some GBD Bulldogs that I had worked on. I searched online for long shank GBD Bulldogs and found the one that I was thinking about. The link led me to a pipe on the site smokingpipes.com – a GBD Celebrity 268 Bulldog. I am including both the link and a picture below (https://www.smokingpipes.com/pipes/estate/england/moreinfo.cfm?product_id=141918).

While the GBD has a slightly shorter shank on it you can see the similarity to the Rota’s pipe and the no name Made in London England pipe on the table now. There is certainly a possibility that both pipes came from the GBD factory in London. However the mystery still remains cloaked in uncertainty.

Now it was time to work on the pipe itself. I used a folded piece of 220 grit sandpaper to clean up the damaged inner edge of the rim. I cleaned up the edge and removed the damaged briar on that portion of the bowl. Once I finished it looked much better than when I started. 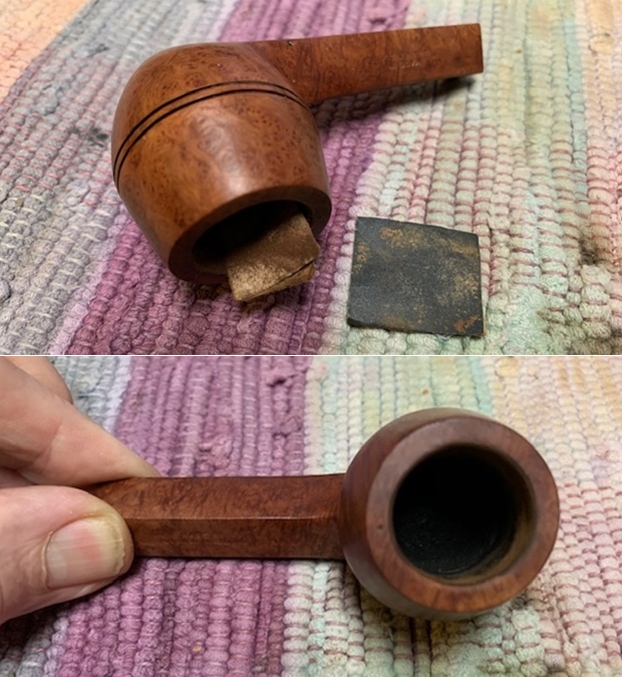 I polished the bowl and rim top with micromesh sanding pads – wet sanding with 1500-12000 grit pads and wiping the briar down with a damp cloth after each sanding pad. 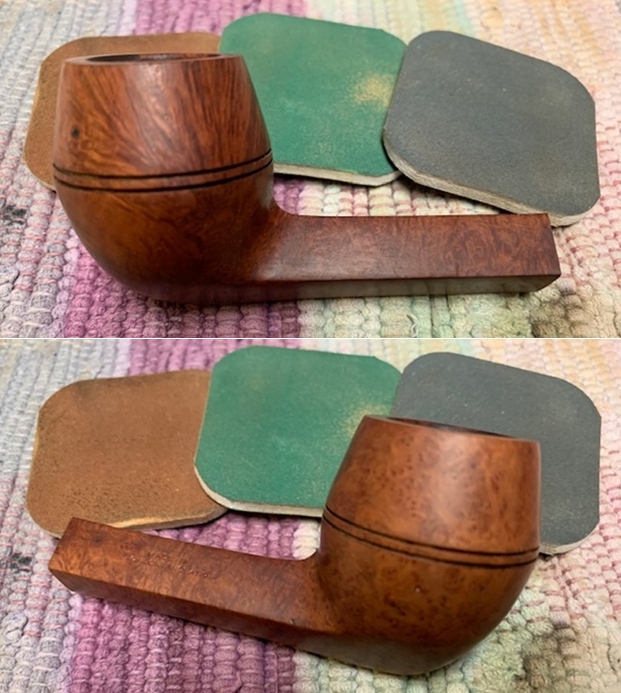 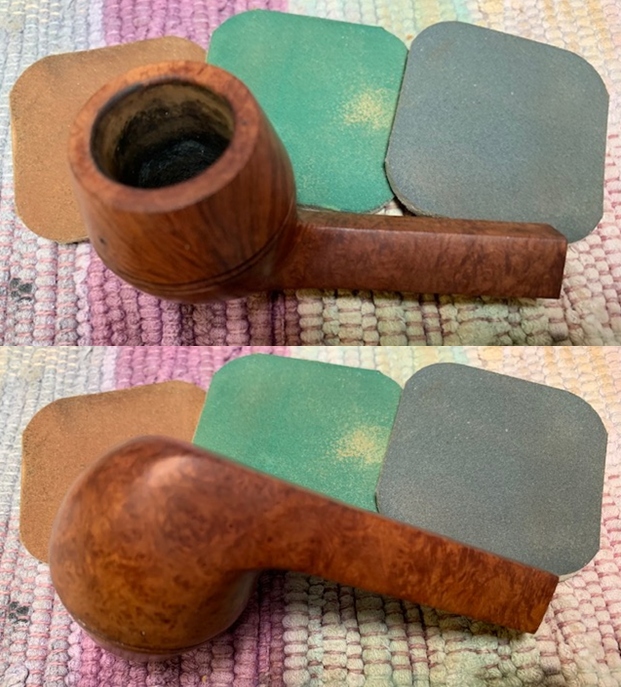 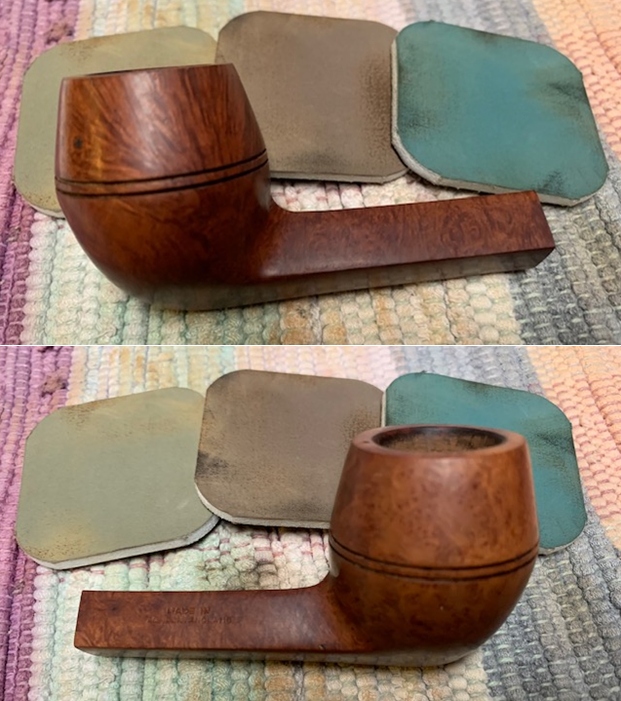 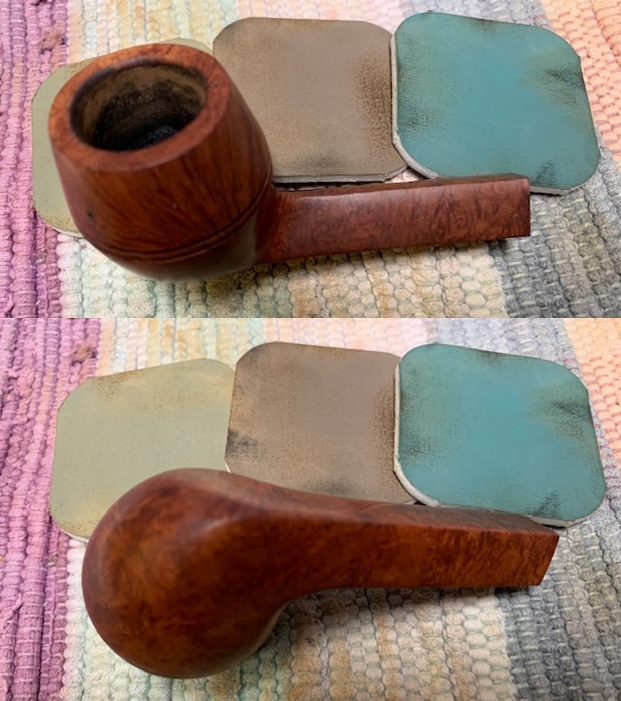 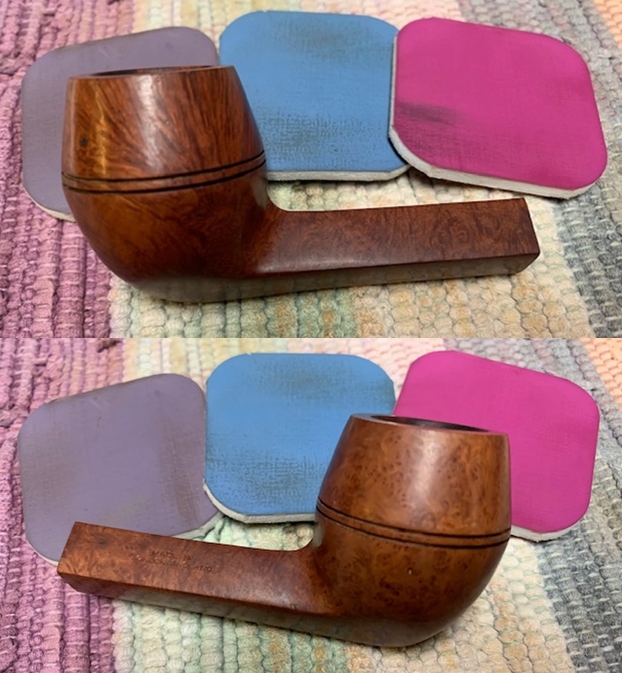 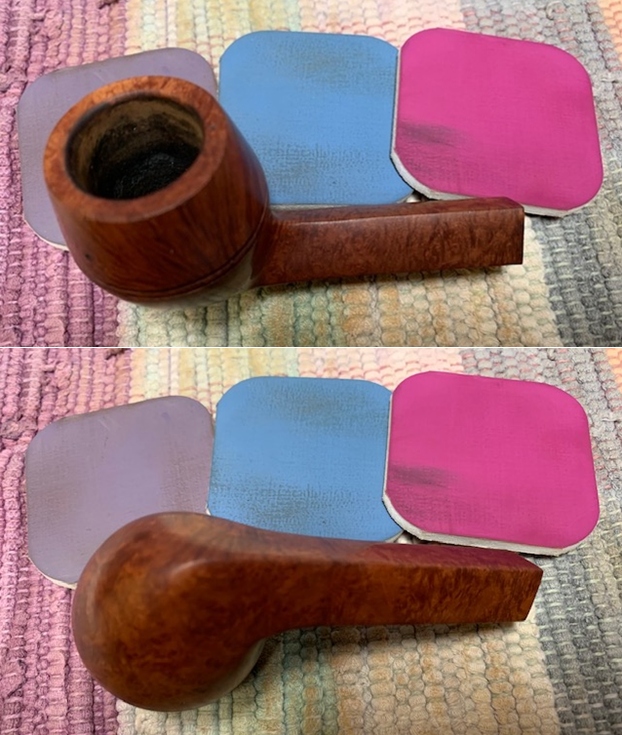 I rubbed the bowl down with Before & After Restoration Balm. I worked it into the surface of the briar with my fingertips to clean, enliven and protect it. I let the balm sit for 15 minutes and then buffed with a cotton cloth to raise the shine. 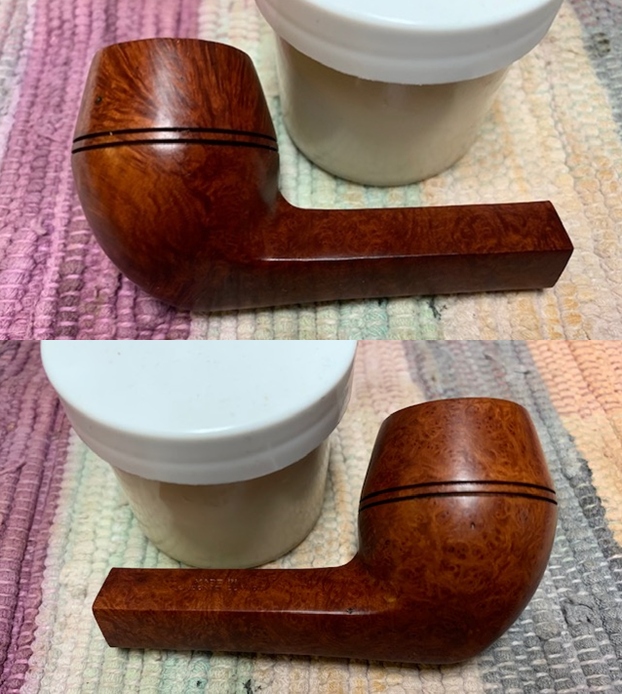 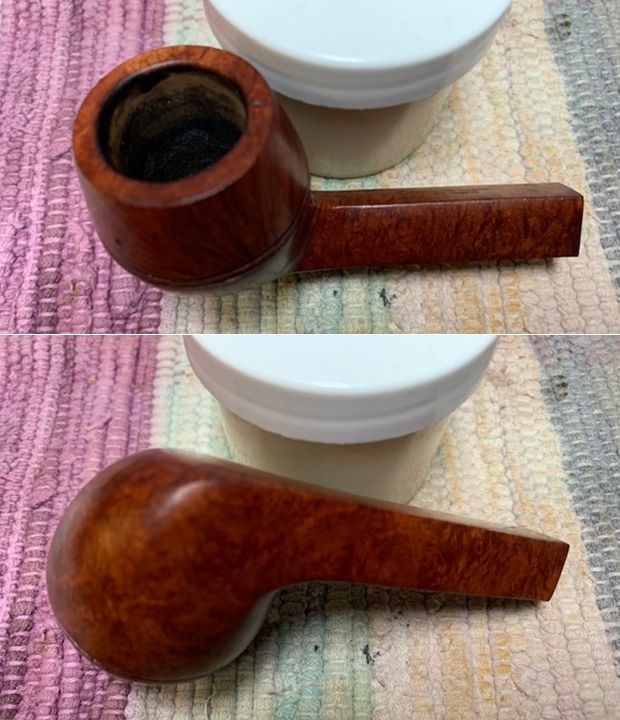 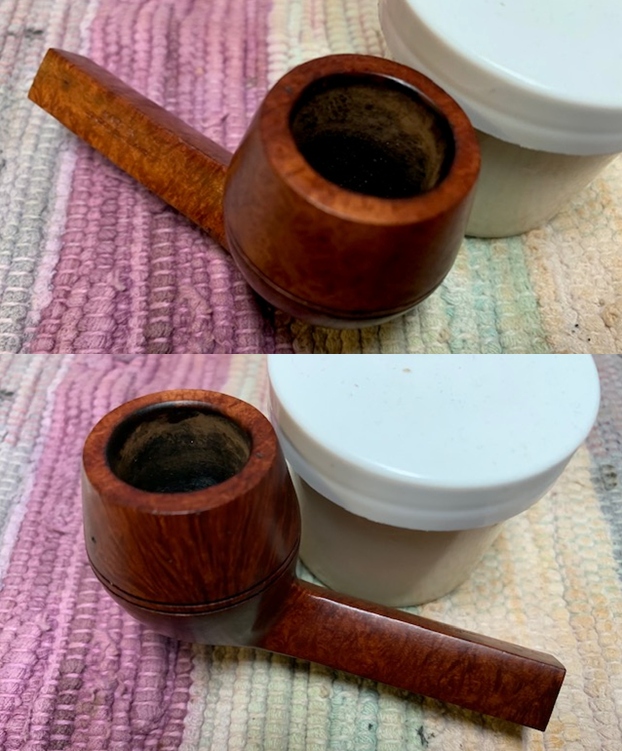 I set the bowl aside and turned my attention to the stem. I “painted” the surface of the stem with the flame of a Bic lighter to lift the tooth marks on the surface of both sides. It worked very well and I would be able to buff the remnants out with micromesh. I scrubbed the stem with Soft Scrub All Purpose Cleaner and cotton pads to remove the remaining oxidation in the vulcanite. 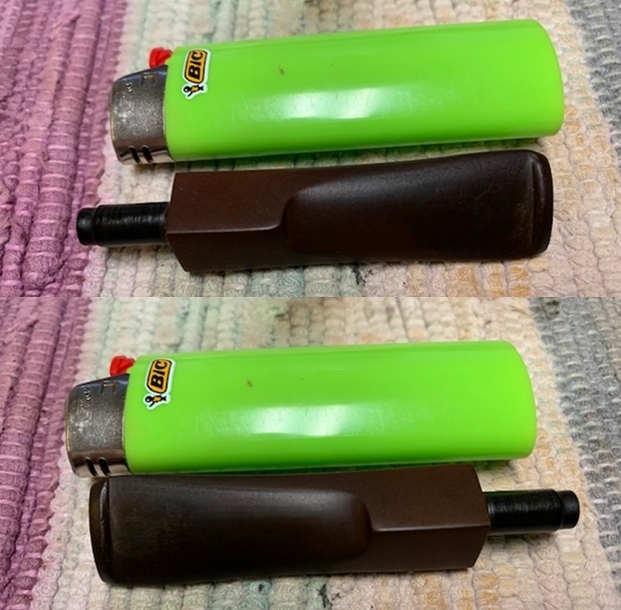 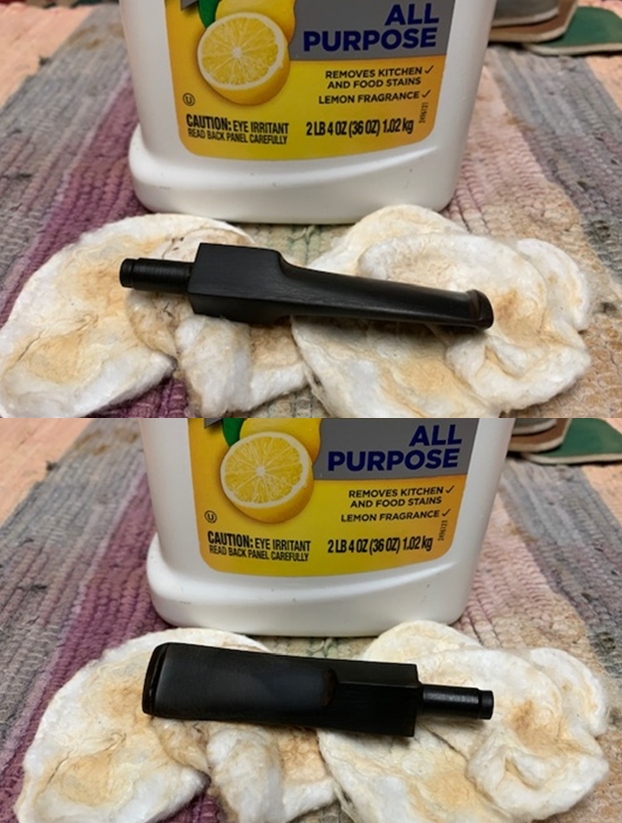 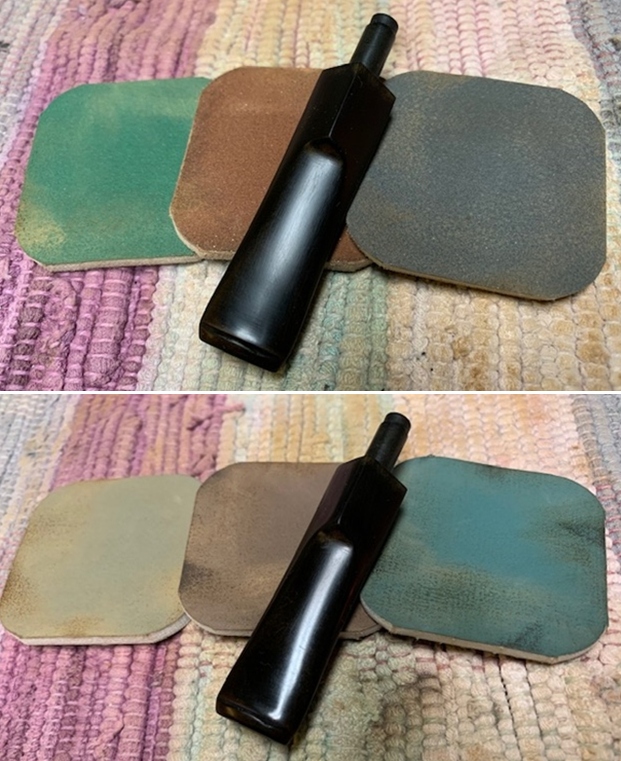 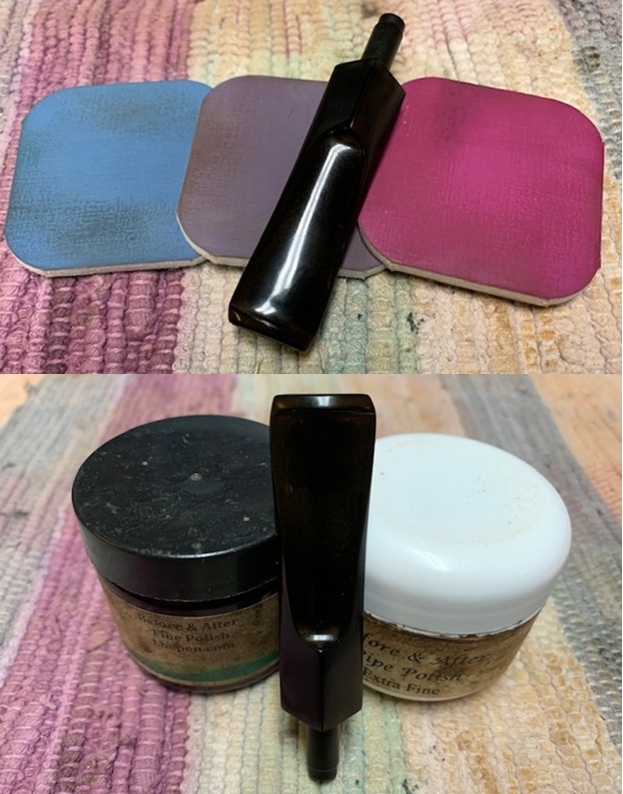 Once again I am the part of the restoration that I always look forward to – the moment when all the pieces are put back together. I put the Made in London, England Long Shank Bulldog back together and buffed the bowl and stem with Blue Diamond on the buffing wheel. I gave the bowl and the stem multiple coats of carnauba wax. I buffed the pipe with a clean buffing pad to raise the shine. I hand buffed it with a microfiber cloth to deepen the shine. It is fun to see what the polished bowl looks like with the rich brown stains around the bowl. The black vulcanite saddle stem stands out as a shiny black contrast to the colours of the bowl. It is a light weight pipe that could be clenched and smoked while doing other things. Have a look at it with the photos below. The dimensions of the pipe are Length: 5 ¾ inches, Height: 2 inches, Outside diameter of the bowl: 1 ¼ inches, Chamber diameter: ¾ of an inch. The weight of the pipe is 38grams/1.34oz. This one will soon be on the rebornpipes online store in the British Pipe Makers section. Thanks to each of you who are reading this blog. Remember we are not pipe owners; we are pipemen and women who hold our pipes in trust until they pass on into the trust of the next generation. 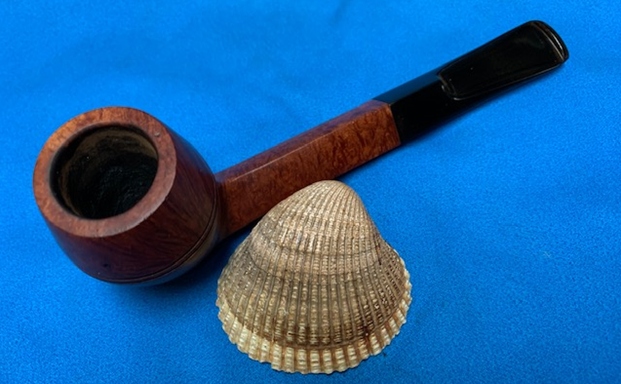 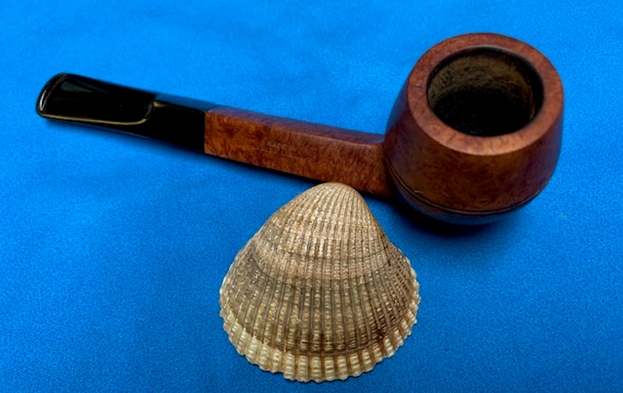 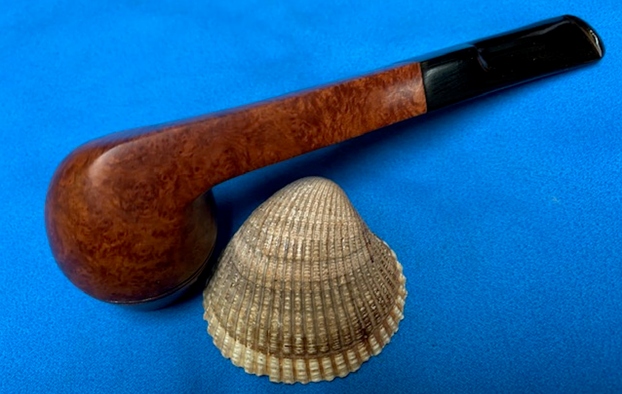 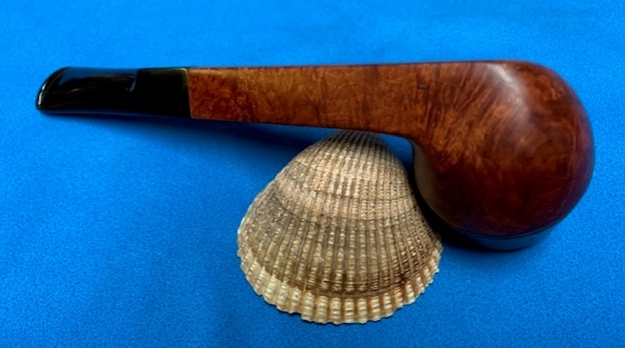 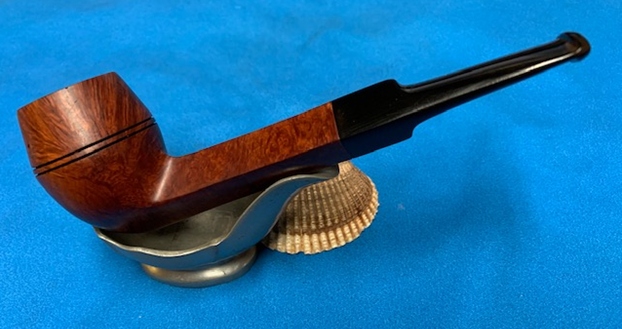 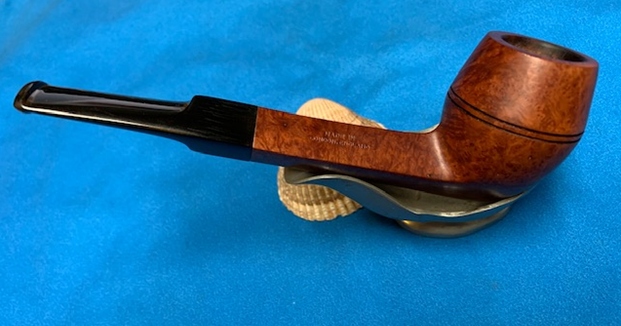 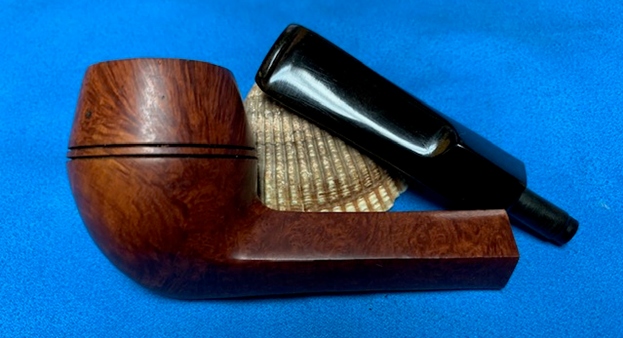 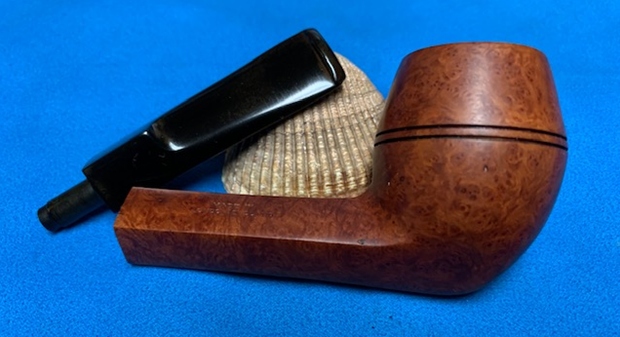 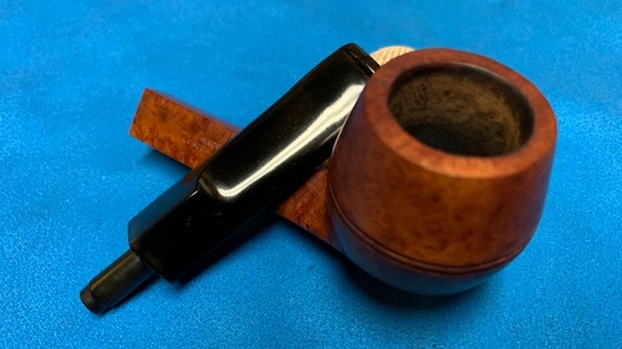 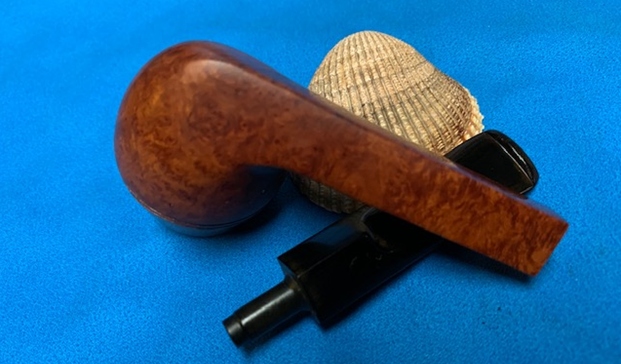 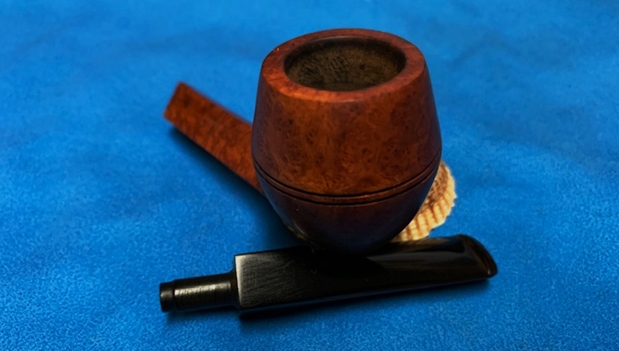 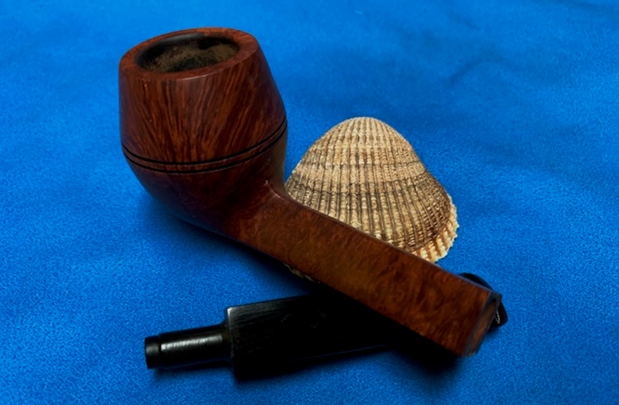