The next pipe on the work table came to us from a group of pipes that we purchased from an antique store in in Montana, USA on one of Jeff’s pipe hunts. It is a double walled ceramic pipe with an acrylic stem. The pipe is stamped on the brass band on the shank and reads ZENITH [over] HOLLAND. Like a meerschaum it has begun to develop a nice patina around the sides of the bowl mid bowl. The finish was dirty and there was gum from price tags on the surface of the stem. The bowl was moderately caked and there was some darkening on the inner edge of the rim. The edges looked to be in excellent condition. The stem was in good condition other than the labels that had been stuck on it and some tooth chatter and marks on the top and underside near the button. The pipe showed promise but it was very dirty. Jeff took photos of the pipe before he started his cleanup work. 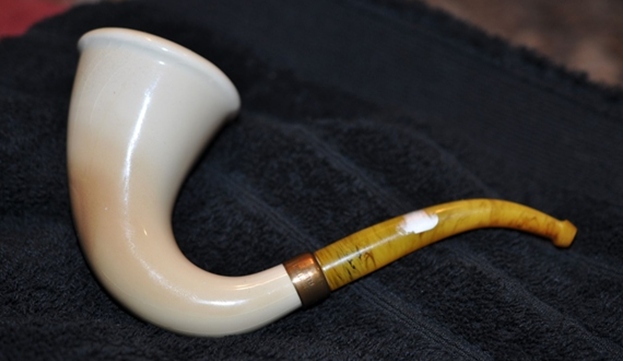 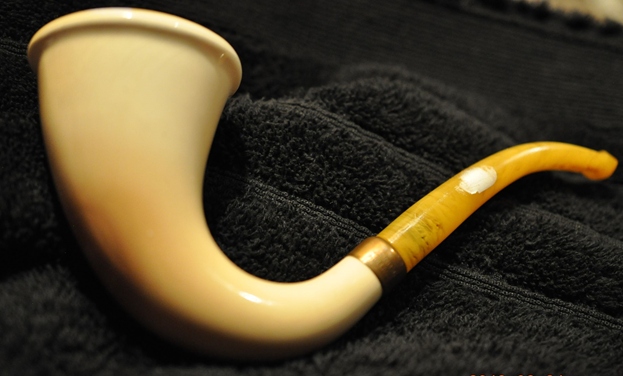 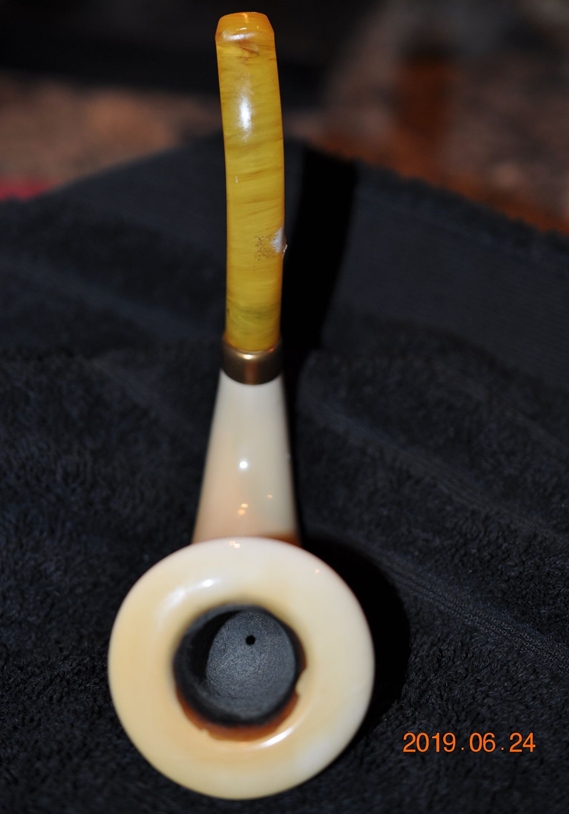 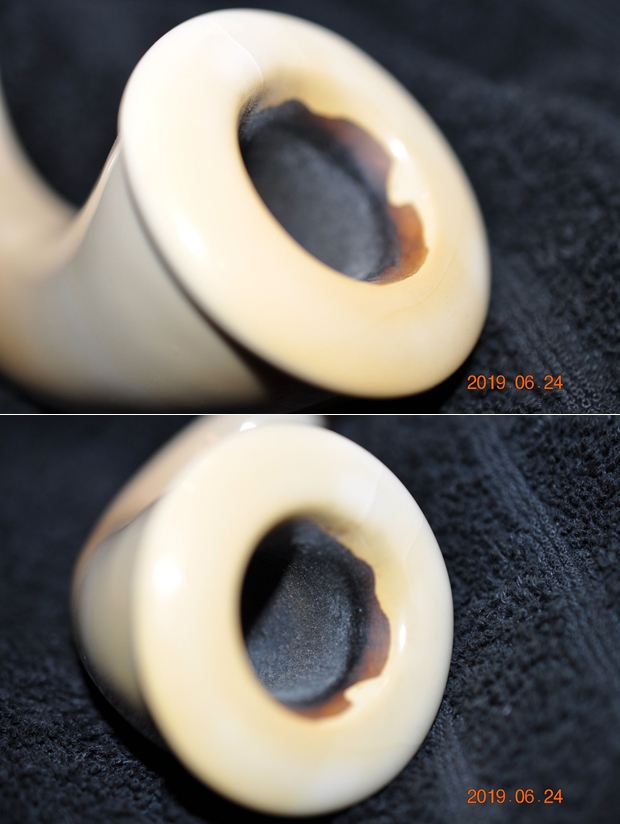 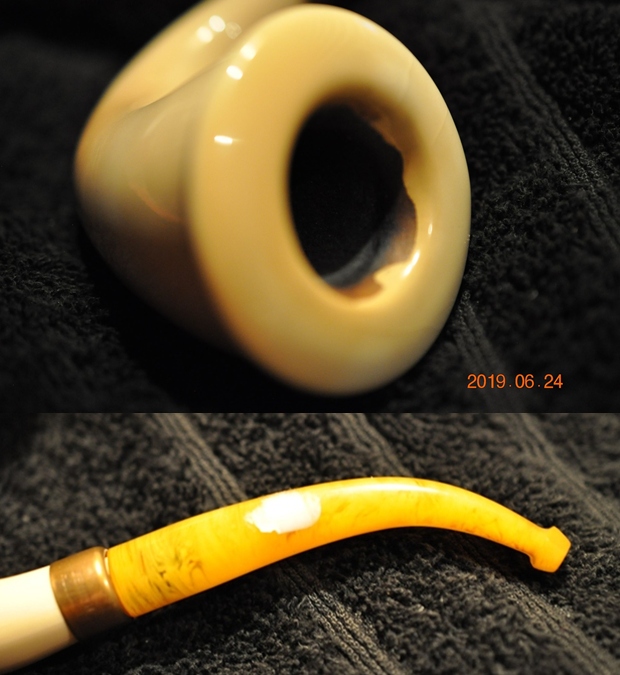 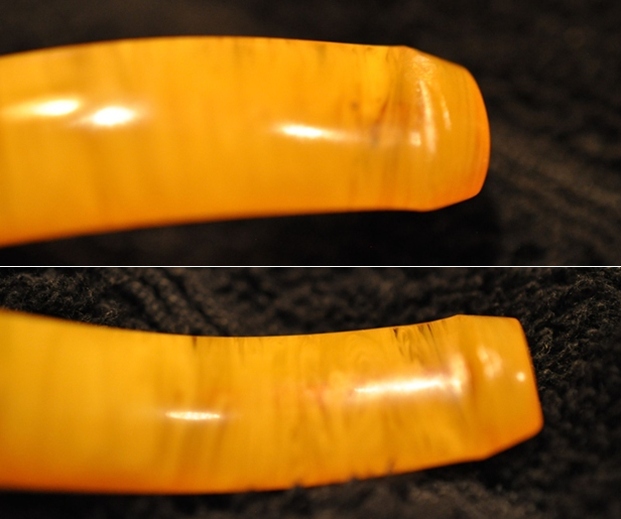 Jeff took photos of the sides and heel of the bowl to give a picture of what the porcelain bowl looked like. 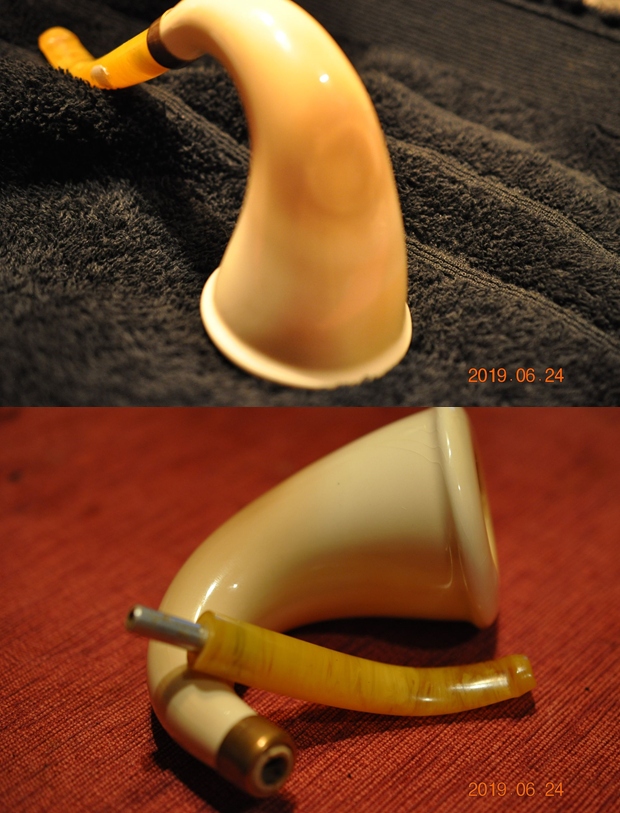 He took photos of the stamping on the band. It reads as noted above and is clear and readable. 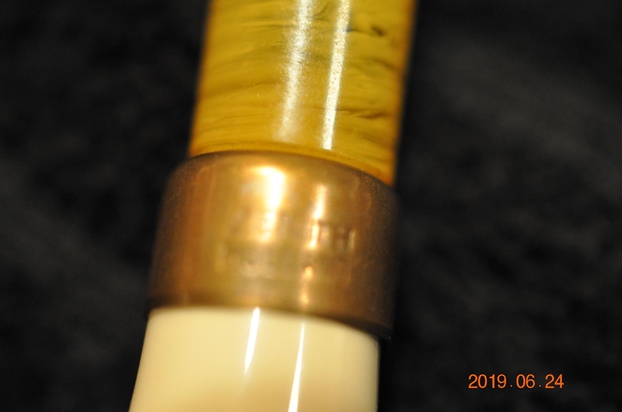 From Pipes, Artisans and Trademarks, by José Manuel Lopes

Zenith is a porcelain pipe brand whose origins go back to 1749 when half the population of Gouda, around 10 thousand people, were employed in pipe manufacturer.

The brand itself was created at the end of World War I and belongs to Royal Delft. The factory has always been in the same family, and Aart van der Want (eighth generation) has been its head since 1984.

The history of the Zenith factory starts in 1749 when Pieter van der Want becomes master pipe maker of the Gouda pipemakers’ guild. He is the first of eight generations of pipe makers in succession from father to son. From the 1950’s the Zenith company is the oldest pipe factory in the world, the firm Chacom in Saint-Claude, founded 1780, is the second oldest.

After having produced clay tobacco pipes for a period of over 150 years, the Gouda factory modernizes its techniques. Pipes were no longer pressed from stiff pipe clay in metal moulds but are shaped in plaster moulds with liquid clay, the so-called slib cast technique. The backed products are covered with a transparent glaze that gives them a smooth, shiny and delicate look. The glaze also makes them less breakable.

Due to the porosity of the ceramic, the slib casted pipes absorb all the moist which attributes Zenith pipes the quality of a cool and dry smoke. In the 1920’s the product is perfected when the so-called “hollow bowl system” is introduced. Between the outside glazed pipe and the inner bowl an open space is created in which the smoke can circulate, where it cools down and the humidity of the smoke is absorbed by the pottery sherd. This invention makes the Zenith pipe to the ultimo dry smoker. Above that, ceramic is the best material to keep the aroma alive, without adding a taste of the pipe itself.

Zenith pipes are produced in a variety of designs and finishes. The ordinary pipe is single walled being mounted with a metal ferrule and a black vulcanite mouthpiece. From the moment of its introduction, circa 1900, millions were sold. After a period of smoking a picture appears on the pipe, that becomes visible when the pipe itself turns brown by the tobacco moist. These so-called mystery pipes were highly fashionable in the 1920’s but are still available with more recent images.

The best known series are the “Old Mokum” pipes. The shapes were designed from the 1970’s onwards by designers like Niels Keus and Dirk van der Want. Credit is that the designs are fully new and different to the common briar pipe. Pipes of the Old Mokum series are mounted with a black rubber plug that holds the vulcanite mouthpiece. The shape named Amsterdam is the larges and gives the best cooling. The smaller version is called Manhattan, having an almost time less look, modern for eternity. Especially younger smokers favour this shape. More traditional are the calabash and a heeled shape known as London.

More luxurious are the shapes from the series “Black Magic”, named after foreign towns like Karachi and Bombay. They are characterized by an own design line having a bulbous bowl and a sportive stem shape. Standard production colour is black, but white and blue varieties are available as well. Next to the round version the series are produced in an octagonal version named facet. Their shape is more subtle, the price however is a bit higher.

The “Gouda classic” is the line more like the traditional briar pipes or the meerschaum pipes. Straight and bent versions are in production with the standard billiard bowl, the Dublin and a bent London. These pipes are mounted with a gilt metal band that underlines their exclusive finish.

Amsterdam Pipe Shop is the only shop in Holland that supplies the complete assortment of Zenith. Prices go from 30 to 95 Euro for the standard shapes. Compared to briar pipes these prices are very reasonable while the Zenith pipe offers a unique smoke experience because in no other pipe the taste of the tobacco is so pure as in ceramic. The cooling system is a guarantee for a dry, cool and tasteful smoke. Starting to smoke a Zenith pipe is simple as can be, since the long and annoying period of breaking in a new pipe can be skipped.

Next to the standard white versions Amsterdam Pipe Shop also carries the coloured Zenith pipes. Among them the shapes like Bombay, Karachi, also the Duke, a comfortable bent reading pipe. Above that, also a series of Delft blue versions are available, especially popular among American smokers.

From the article I followed a lead to the Amsterdam Pipe Shop and picked up the following page that gives a great summary of the history that is edited for the Pipedia article. I have included a screen capture of the entire page below as well as the link (http://www.pijpenkabinet.nl/Smokiana/04-E%20Zenith.html).

Now it was time to work on the pipe. Jeff had cleaned up the pipe with his usual penchant for thoroughness. He scraped the bowl of  the pipe with a Savinelli Fitsall Pipe Knife to remove the cake that was there.  He scrubbed both the interior and the exterior of the pipe and bowl with undiluted Murphy’s Oil Soap and a tooth brush. He rinsed it under running warm water to remove the soap and grime. He cleaned out the inside of the shank and the airway in the stem with alcohol, cotton swabs and pipe cleaners. He scrubbed the stem with Soft Scrub all purpose cleaner to remove the sticky glue on the topside and the grime on the surface. He rinsed it off with warm water. I took photos of the pipe once I received it. 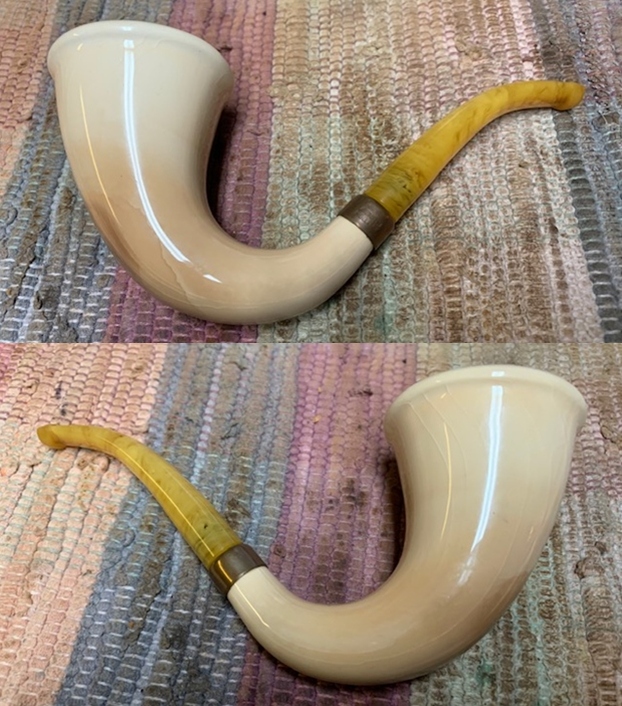 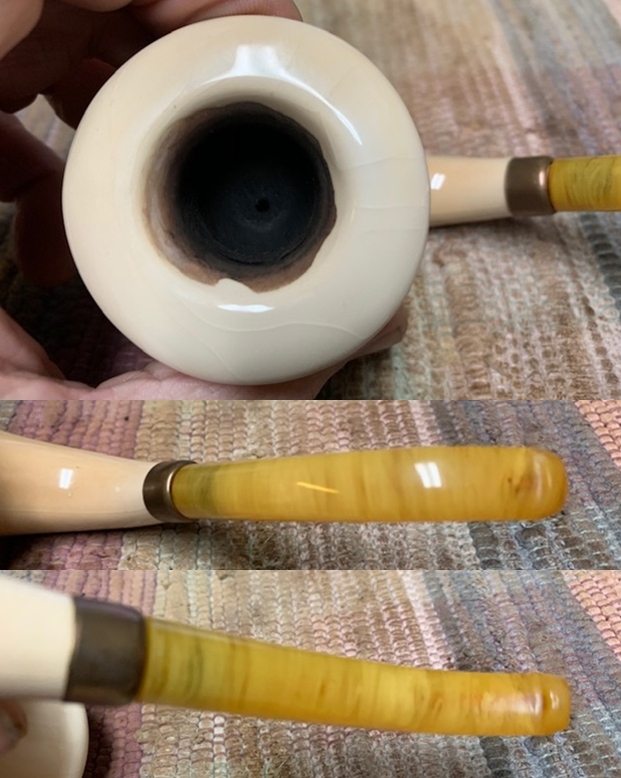 I removed the stem and took a photo of the pipe to give a sense of the whole. The stem is an acrylic taper stem. There is a cork gasket in the shank that holds the metal tenon firmly in place against the shank end. This photo shows some of the waves of patina that are developing along the walls of the shank and bowl. It really is a pretty pipe. 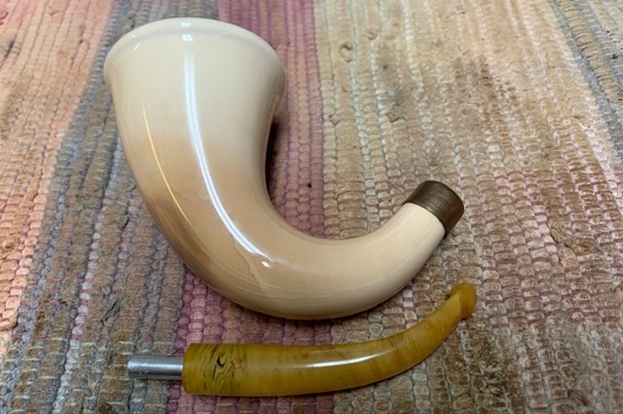 The bowl was in excellent condition and the glaze on the ceramic sealed it well. I did not need to polish or wax the bowl at all. It really is an effortless cleanup for me in terms of the bowl after Jeff’s cleanup. I polished the acrylic stem with micromesh sanding pads – 1500-12000 grit pads to remove the light tooth chatter and marks near the button. I wiped it down with a damp cloth after each sanding pad. I used Before & After Pipe Polish – both Fine and Extra Fine to further polish the stem. 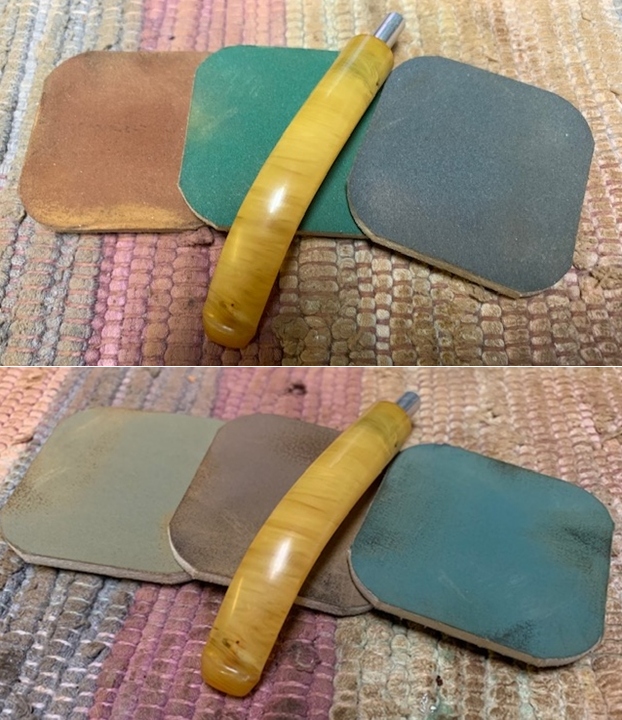 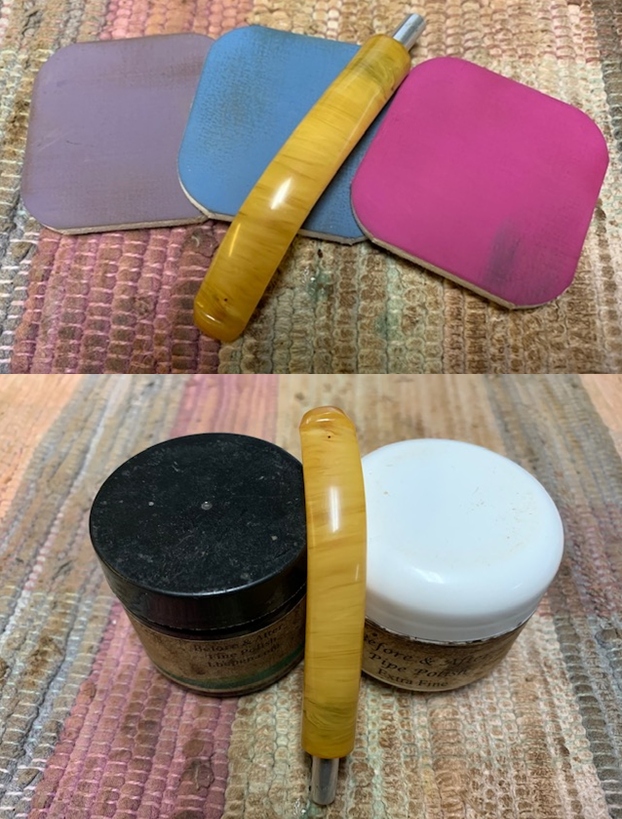 This Holland Zenith Double Walled Ceramic Calabash with an amber coloured acrylic taper stem is a great looking pipe now that it has been restored. The stamped Zenith Holland stamp on the left side of brass ferrule is clear and readable. The patina that is developing around the bowl that shines through the ceramic glaze is stunning. I buffed the entire pipe with a clean buffing pad which real brings the shine out with the wax. I hand buffed the pipe with a microfiber cloth to deepen the shine. The finished Zenith Double Walled Ceramic Calabash fits nicely in the hand and feels great. Give the finished pipe a look in the photos below. The dimensions of the pipe are Length: 6 ¼ inches, Height: 3 inches, Outside diameter of the bowl: 2 ¼ inches, Chamber diameter: 1 of an inch. The weight of the pipe is 73gr/2.57oz. I will be adding it to the French Pipe Makers section of the rebornpipes store shortly. If you are interested in adding this pipe to your collection send me a message or an email. Thanks for reading this blog and my reflections on the pipe while I worked on it. There are many more to come! 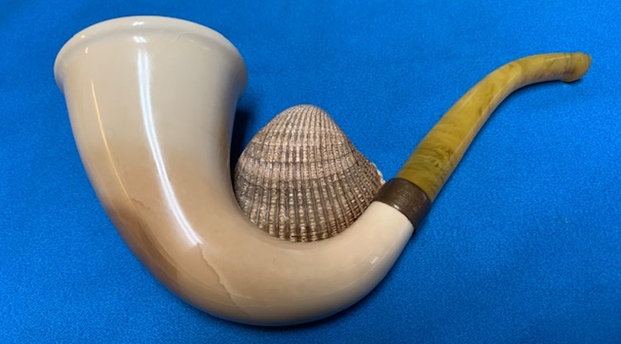 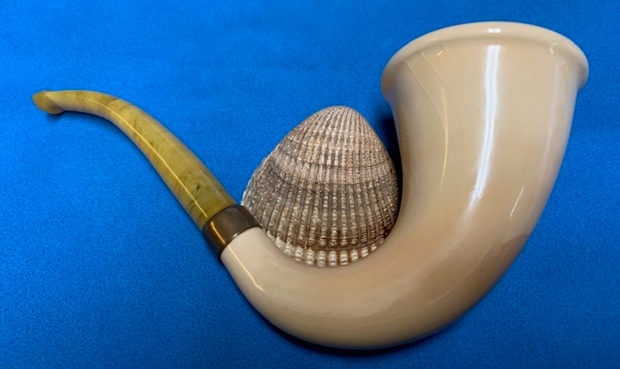 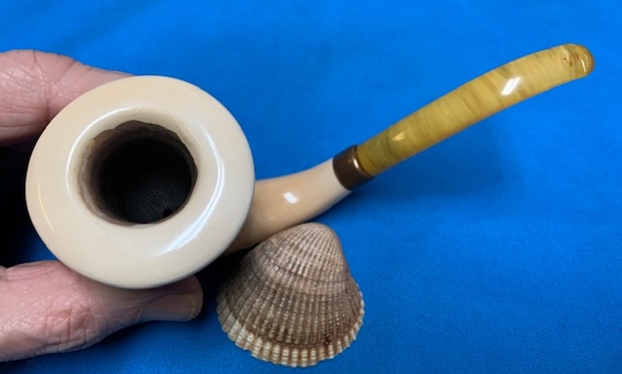 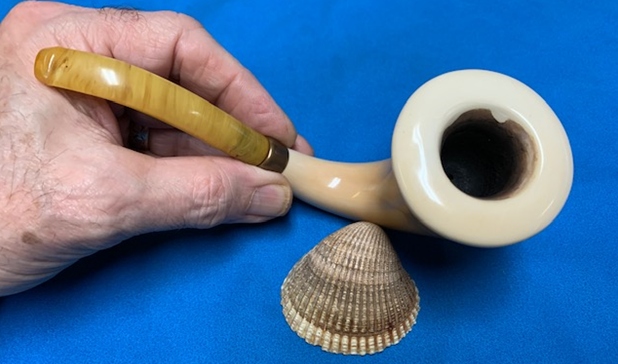 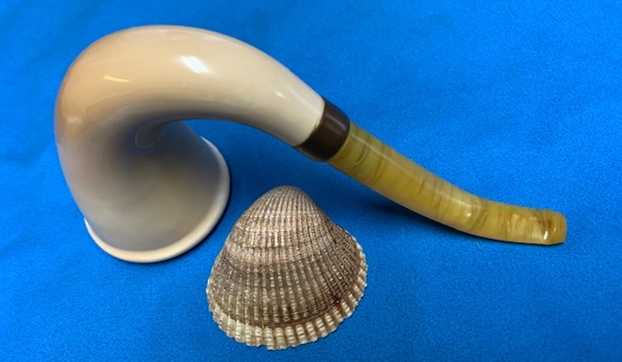 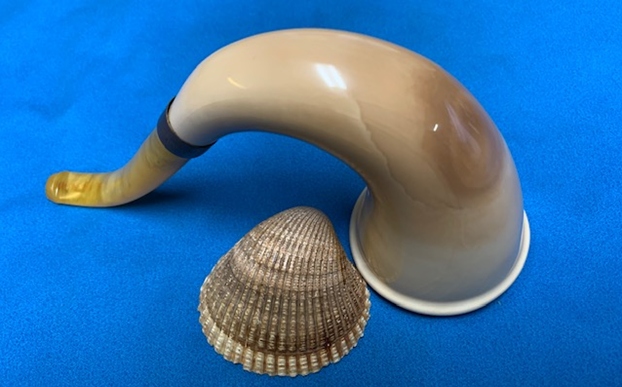 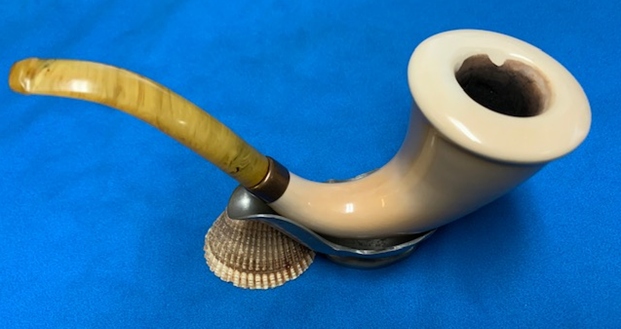 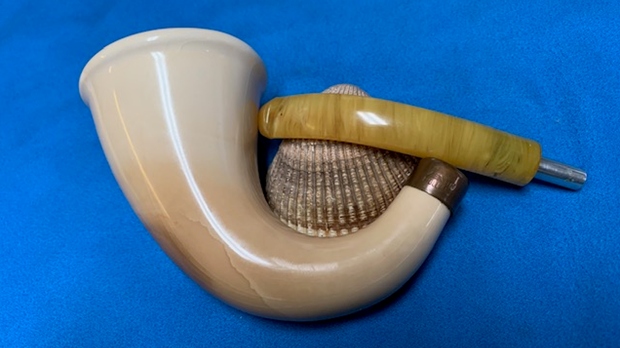 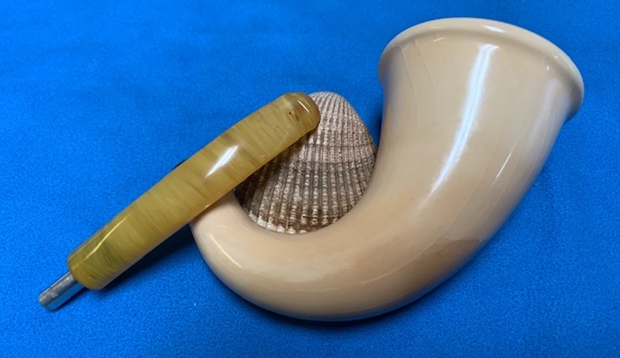 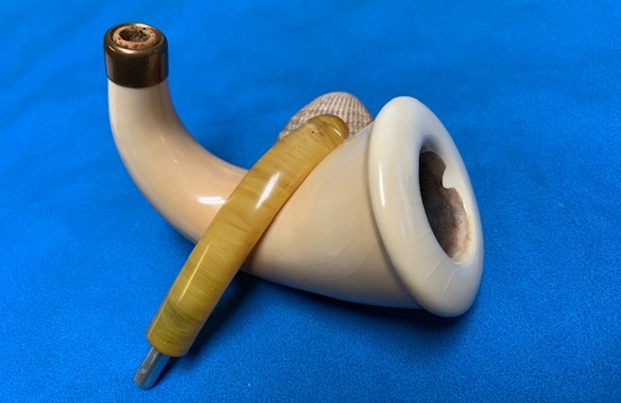 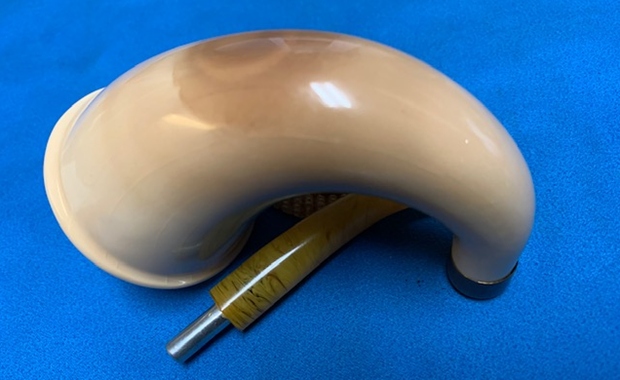 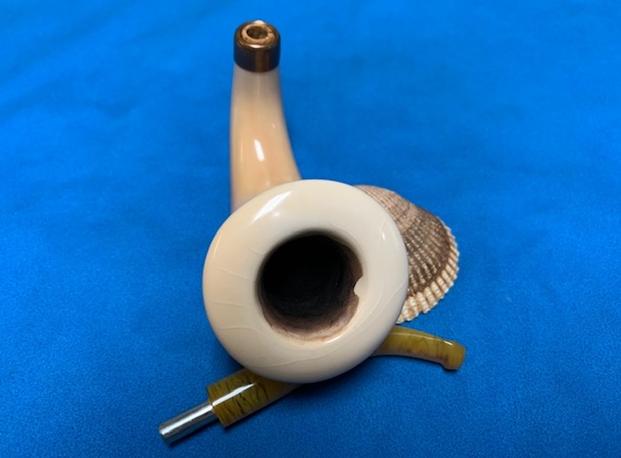 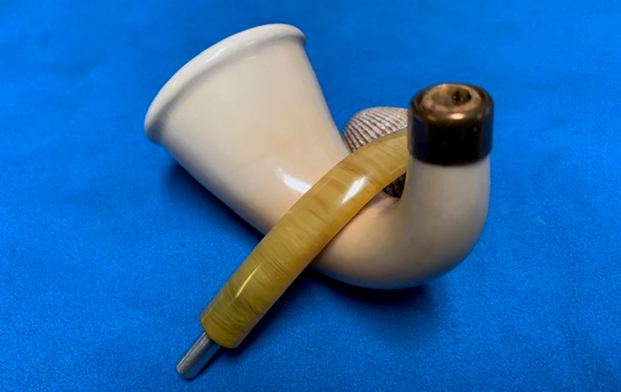