The next pipe on the table came to us in a group of pipes that we purchased from a fellow in Los Angeles, California, USA. It is a Dunhill Red Bark Bent Bulldog that is in good condition. It is stamped on a smooth panel on the underside of the shank. On the heel of the bowl it is stamped with the shape number 6P F/T followed by Dunhill [over] Red Bark followed by Made in England 12. That is followed by 4 in a circle followed by R/B for Red Bark. Interpreting that stamp it is as follows: The 6P is the shape for a bent saddle stem Bulldog and the F/T is the designation for the button shape – a Fish Tail. The Dunhill Red Bark is the finish which is corroborated the R/B at the end of the stamping. The 12 following the D of England gives the date the pipe was made and identifies it as 1972. The stamping is clear and readable. The age of the pipe and the oils in the sandblast finish has given the pipe a rich reddish brown finish. There is also some amazing grain that the shape follows well. The finish was dirty with dust around the nooks and crannies of the sandblast. There was a thick cake in the bowl and tobacco debris stuck to the walls of the bowl. The rim top showed darkening and some lava in the sandblast. The vulcanite saddle stem was oxidized, calcified and had light tooth marks and chatter ahead of the button.  Jeff took photos of the pipe to show what it looked like before he started working on it. 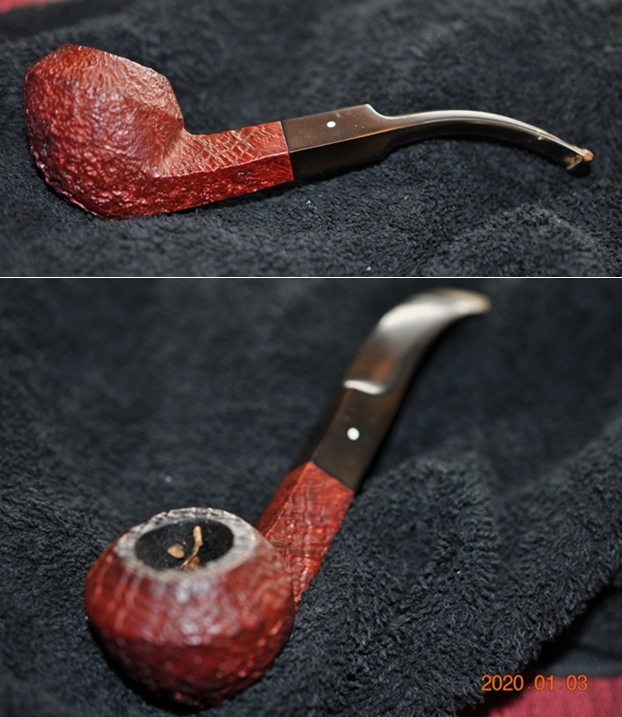 He took photos of the bowl and rim top to show the thickness of the cake and the darkening and light lava overflow on the rim top. The photos of the stem show the oxidation, calcification and tooth marks and chatter on the surface on both sides. 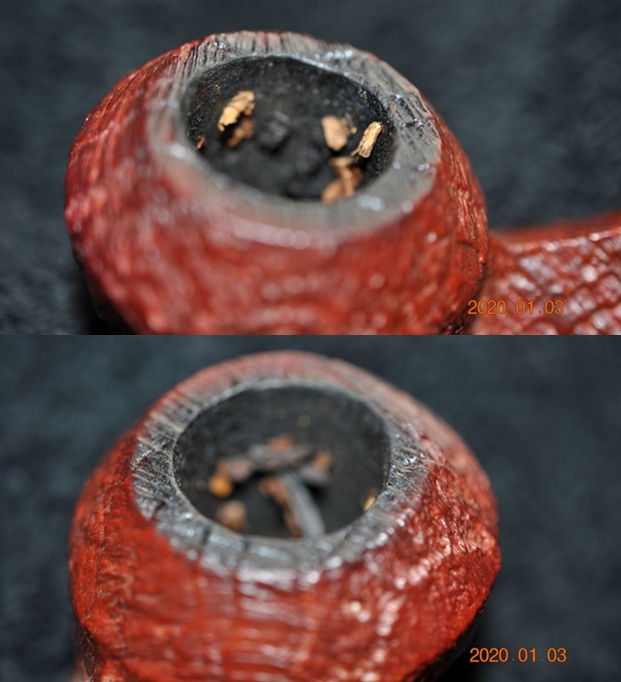 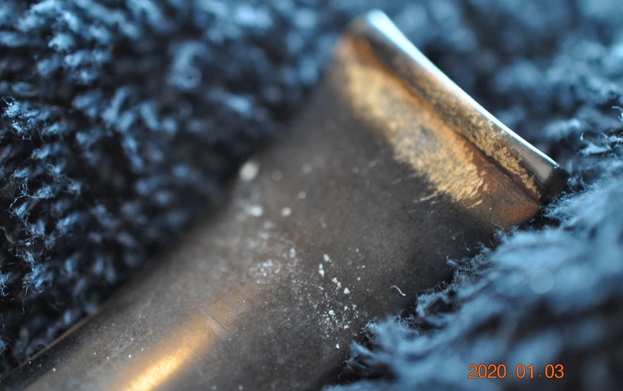 The photos of the sides and heel of the bowl show the deep sandblast grain on the pipe. It is a beauty under the grime and dust.

The stamping on the underside of the shank is shown in the photos below. It looks very good and readable. It reads as noted and explained above. The third photo shows the white spot on the stem.

I turned to Pipedia’s section on Dunhill Red Bark Pipes to get a bit of background on the Dunhill finishes (https://pipedia.org/wiki/Dunhill#Root_Briar). I quote:

Red Bark: Introduced in 1972, the Red Bark is a reddish stained sandblast, and is the most famous of Dunhill’s retired finishes. Originally, the stain was a medium red. A couple of years later the stain was changed to a brighter red, almost pinkish in colour. The almost pink colour caused pipe sales to plummet. In 1976, the stain was changed back to the original darker medium red finish. The Red Bark finish was officially retired in 1987. The County and Russet finishes have also been retired.

I turned to Pipephil’s dating guide to show how I arrived at the date of manufacture for this pipe (http://www.pipephil.eu/logos/en/dunhill/cledat-en1a.html). I am including the chart that is provided there for the dating a pipe. I have drawn a red box around the section. Since the pipe I am working on has a 12 it points to the 1960+ suffix line on the chart below. 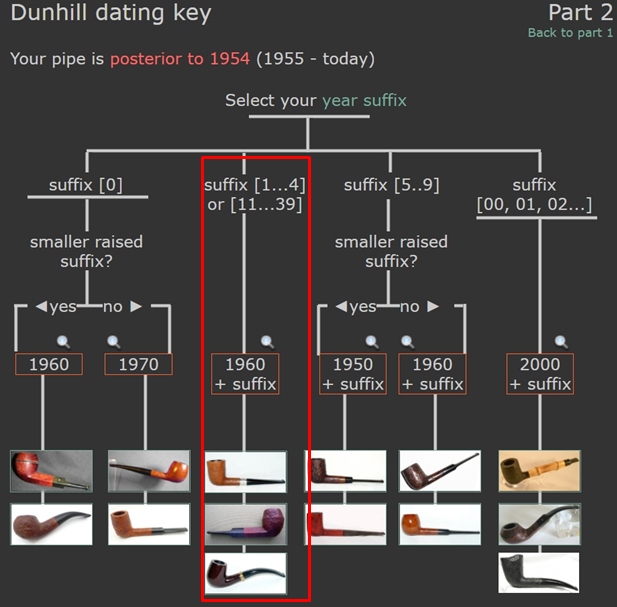 I now knew that I was working on a Red Bark that came out in 1972 which was the first year that the line was introduced. It was retired in 1987 and was one of the most famous of Dunhill’s retired finishes. It also had the medium red stain of the first pipes introduced from Dunhill in the Red Bark line.

I took a photo of the rim top to show the condition. You can see the darkening on the rim top on the back right. It is roughened and chipped and out of round. The saddle stem came out looking quite good. There are light tooth marks and chatter on both sides near the button as well as some remaining oxidation.

I took a photo of the underside of the shank to show the stamping. It is clear and readable as noted above.

I decided to start the restoration on this one by working on darkening on the right rear of the rim top. I scrubbed it with a brass bristle wire brush to remove the darkening. I also scrubbed the front of the bowl where there was some darkening. After scrubbing it the bowl and the rim top looked much better.

With the repair completed I rubbed the briar down with Before & After Restoration Balm. I worked it into the briar with my fingertips and a horsehair shoe brush to work it into the nooks and crannies of the sandblast finish. The product works to clean, enliven and preserve the briar. I let it sit for 15 minutes while I worked on the stem. After the time passed I buffed it with a cotton cloth to deepen the shine. The briar really comes alive with the balm. 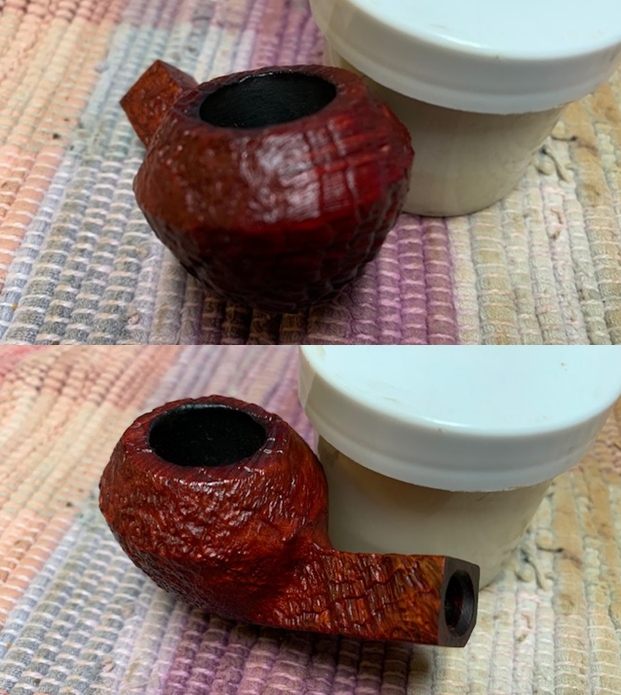 I set the bowl aside and turned my attention to the stem. It turned out to be a 6mm filter stem. It had some underlying oxidation that needed to be dealt with. I put it in a bath of Briarville’s Pipe Stem Oxidation Remover and let it soak for half a day. I took it out of the bath, dried it off and scrubbed the remaining oxidation with Soft Scrub All Purpose Cleanser.

This Dunhill Red Bark 6P F/T Bent Bulldog is a beautiful sandblast with the unique Sandblast finish made in 1972. It is a great looking pipe that came out looking very good. The Red Bark finish has a great rugged sandblast that Dunhill specialized in making. The finish on the pipe is in excellent condition. The oils off the smoker’s hands and the mahogany/medium red stain on the bowl works well to highlight the grain. The polished black vulcanite saddle stem adds to the mix. With the dust gone from the finish and the bowl it was a beauty and is eye-catching. I put the stem back on the bowl and buffed the pipe with Blue Diamond on the buffing wheel being careful to not buff the stamping. I gave the bowl multiple coats of Conservator’s Wax and the stem multiple coats of carnauba wax on the buffing wheel and followed that by buffing it with a clean buffing pad. I hand buffed the pipe with a microfiber cloth to deepen the shine. The finished 6P F/T Red Bark Bulldog is quite nice and feels great in the hand. Give the finished pipe a look in the photos below. I can only tell you that like the other pipes I am working that it is much prettier in person than the photos capture. The dimensions of the pipe are Length: 5 ½ inches, Height: 1 ½ inches, Outside diameter of the bowl: 1 ½ inches, Chamber diameter: ¾ of an inch. The weight of the pipe is 37grams/1.31oz. Thanks for walking through the restoration with me as I worked over another beautiful pipe. Remember we are not pipe owners; we are pipemen and women who hold our pipes in trust until they pass on into the trust of the next generation. 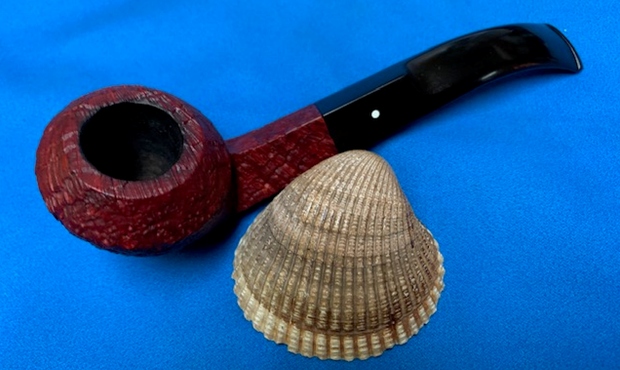 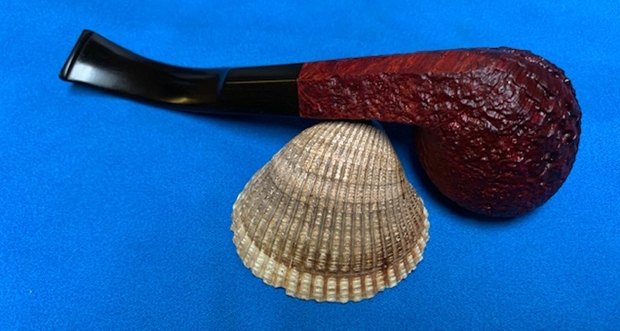 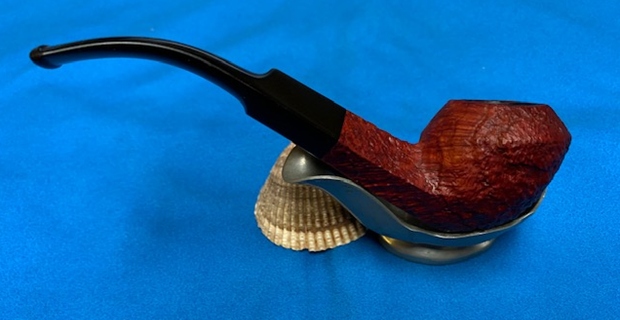 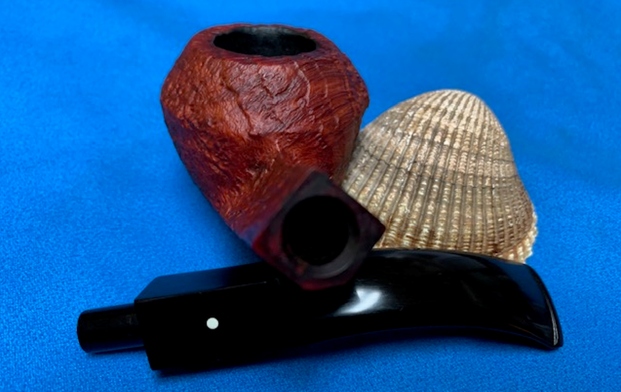