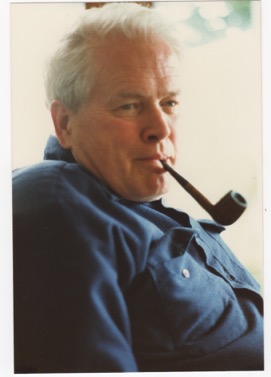 The next pipe I have chosen from Bob Kerr’s collection is the first of four metal pipes in the estate. Bob was an artist from the Vancouver area and a real character (Bob’s photo is to the left). If you have not “met” the man and would like to read a bit of the history of the pipeman, his daughter has written a great tribute that is worth a read. Because I have included it in most of the restorations of the estate to date I thought that I would leave it out this time. To read it you can check out some of the recent Dunhill restoration blogs such as the one linked below (https://rebornpipes.com/2020/01/01/restoring-the-last-of-bob-kerrs-dunhills-a-1962-dunhill-bruyere-656-f-t-bent-billiard/).

This first metal pipe from Bob’s Collection – a Falcon and this one is worn and dirty. It has a Dublin bowl and a medium brown finish. The metal and the briar bowl are very dirty with dust and debris ground into the finish. There was a thick cake in the bowl with tobacco debris. There was a heavy lava overflow on 2/3rds of the rim making it impossible to know if there is any damage on the inner edge of the bowl. It is stamped FALCON on the metal base of the pipe. There was also a number 1 in the hollow on the bowl bottom. The vulcanite stem is tapered and is oxidized, calcified and has light tooth marks and chatter on both sides near the button. Jeff took photos of the pipe to show its general condition before he did his cleanup.

Jeff captured the filthy bowl and rim top in the next photos. You can see the thick the coat of lava on the edges and top. The thick cake in the bowl is also visible in the photos. The pipe was obviously one of Bob’s favourites and must have been an amazing smoker even this clogged with debris. 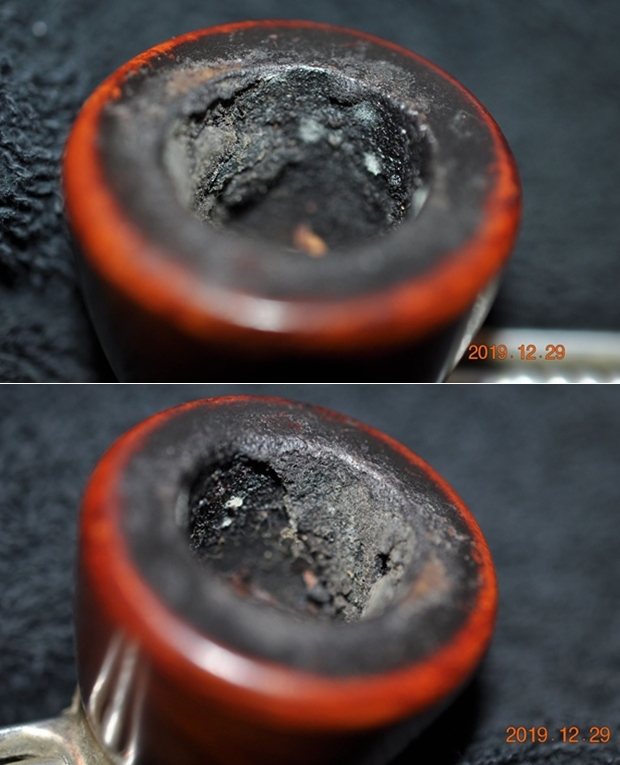 The next two photos show the grime ground into the smooth finish around the sides of the briar bowl. This old pipe was truly a mess. The aluminum base and shank are oxidized and dirty. 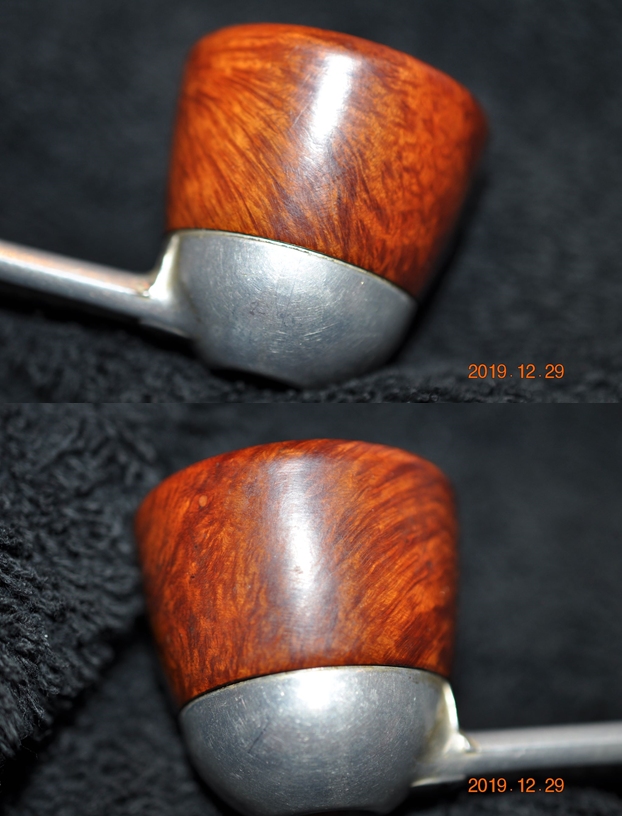 The brand is stamped on the underside of the shank and in the indentation there is a number 1 stamped.

Jeff unscrewed the bowl from the base to show the tars and oils in the base. It hardens to a lacquer. 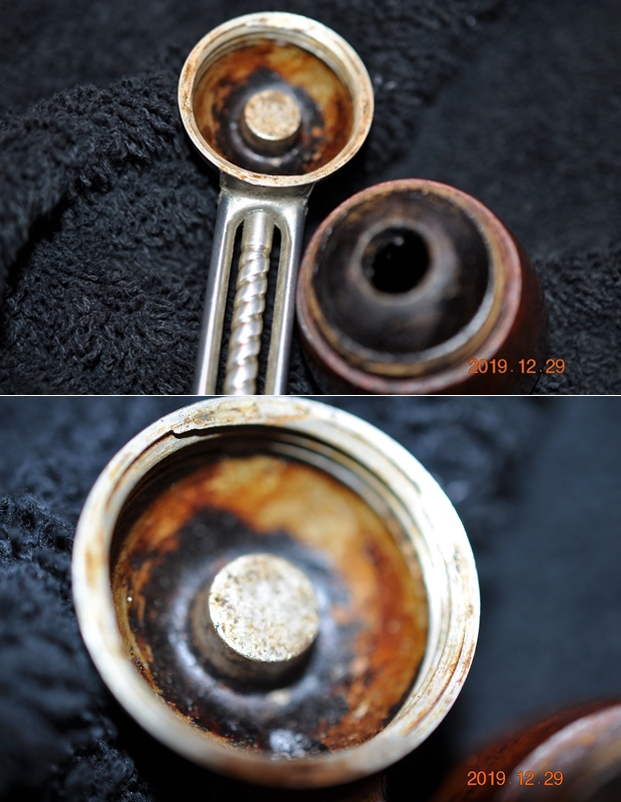 The stem is calcified and oxidized with light tooth marks and chatter on both sides.

I turned to Pipephil (http://www.pipephil.eu/logos/en/logo-f1.html) to see what I could learn about the brand. I have included a screen capture of the information on the site below.

I also include the brief sidebar history from the site below:

The Falcon Pipe is an American invention, patented by Kenley Bugg of Fort Wayne, Indiana in 1936.

1956: D.M.W purchased the patents and trademarks from Falcon Industries Inc. and took over the Falcon pipes manufacture.

1968: Falcon pipe production moved from the U.S to the U.K in its entirety. Falcon Pipes Ltd. (also known as Falcon House Group) was owned by David E. Morris.

1974: Falcon London had sold about 14 million pipes around the world outside the U.S.A.

The Falcon logo on the mouthpiece was discontinued in 1994.

There was also interesting information the particular stamping on the base of this pipe. It has the stamping that identifies it as an American made Falcon. Now I had the basic background information on the pipe. I also knew that the pipe was made after 1948 and prior to the move of production to the UK in 1968.

With over 125 pipes to clean from Bob’s estate I took a batch of them to the states with me when I visited and left them with Jeff so he could help me out. Jeff cleaned the pipes with his usual penchant for thoroughness that I really appreciate. Once he finished he shipped them back to me. This one was a real mess and I did not know what to expect when I unwrapped it from his box. He reamed the bowl with a PipNet pipe reamer and cleaned up the reaming with a Savinelli Fitsall Pipe Knife. He scrubbed out the internals with alcohol, pipe cleaners and cotton swabs until the pipe was clean. He scrubbed the exterior of the bowl with Murphy’s Oil Soap and a tooth brush to remove the grime and grit on the briar and the lava on the rim top. The finish looks very good with good looking grain around the bowl and shank. Jeff scrubbed it with Soft Scrub and soaked it in Before & After Deoxidizer to remove the oxidation on the rubber. When the pipe arrived here in Vancouver for the second stop of its restoration tour it looked a lot better. I took photos before I started my part of the work.

I took a close up photo of the rim top and bowl to show how clean both were. The rim top showed some wear on the front edge and top. I also took photos of the stem top and underside. You can see the remaining oxidation and the light tooth marks.

I took photos of the stamping on the heel of the base and the shank. You can see the FALCON stamp and the number 1.

I took the bowl off the base and took photos of the pipe. It is a very clean looking pipe. The base is sparkling now rather than darkened with tobacco lacquer. With a little work the stem oxidation will be gone and it will look very good.

I decided to start working on the pipe by dealing with damaged inner edge of the bowl. I sanded it with a folded piece of 220 grit sandpaper. I then repaired the filled areas with clear super glue. Once the repairs had cured I sanded them smooth to blend them into the surrounding briar. 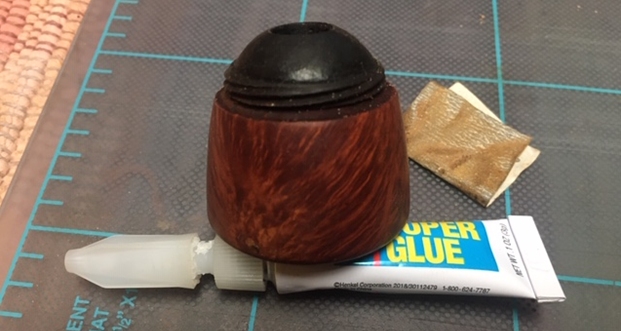 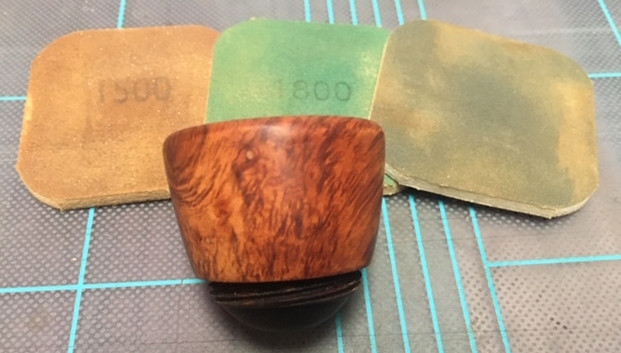 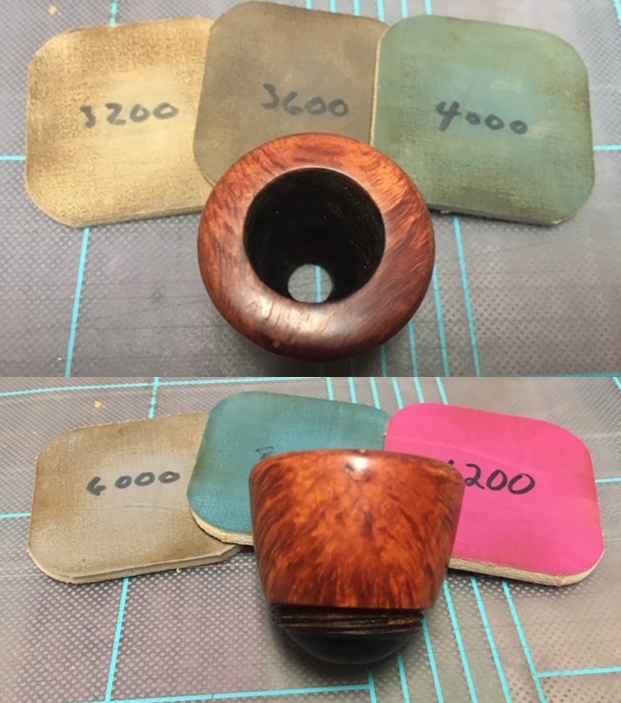 I worked Before & After Restoration Balm into the rusticated surface of the briar with my fingertips to clean, enliven and protect it. I let the balm sit for a little while and then buffed with a cotton cloth and shoe brush to raise the shine. The pipe looks very good after the Balm has done its magic. 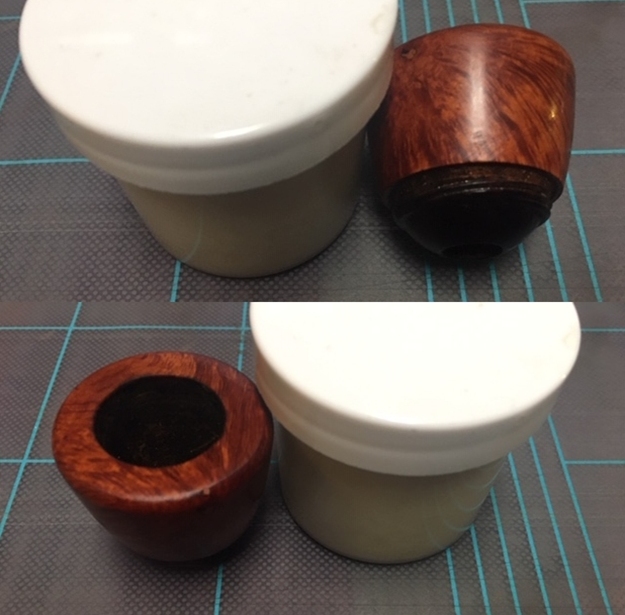 I set the bowl aside and turned my attention to the stem. The stem was in great condition with light tooth marks and some remaining oxidation. I sanded the stem with a folded piece of 220 grit sandpaper to remove the oxidation, tooth marks and chatter. I started polishing the vulcanite with 400 grit wet dry sandpaper.

This American made Falcon with a Dublin bowl from Bob Kerr’s estate turned out to be a great looking pipe. The grain on the bowl is quite beautiful and really came alive with the cleaning and buffing. The finish on the pipe is in excellent condition and works well with the polished base and vulcanite saddle stem. I put the bowl back on the base and carefully buffed the pipe with Blue Diamond on the buffing wheel using a light touch on the metal. I gave the bowl and stem multiple coats of carnauba wax and buffed it on the buffing wheel. I buffed entire pipe with a clean buffing pad to raise the shine on the bowl and stem. I hand buffed the pipe with a microfiber cloth to deepen the shine. The finished Falcon with a Dublin bowl fits nicely in the hand and feels great. Give the finished pipe a look in the photos below. The dimensions of the pipe are Length: 5 ¾ inches, Height: 1 ½ inches, Outside diameter of the bowl: 1 ½ inches, Chamber diameter: 7/8 of an inch. If you are interested in carrying on Bob’s legacy with this Falcon metal pipe send me a message or an email. I have more to work on of various brands. Perhaps one of those will catch your attention. Thanks for reading this blog and my reflections on the pipe while I worked on it. This is an interesting estate to bring back to life. 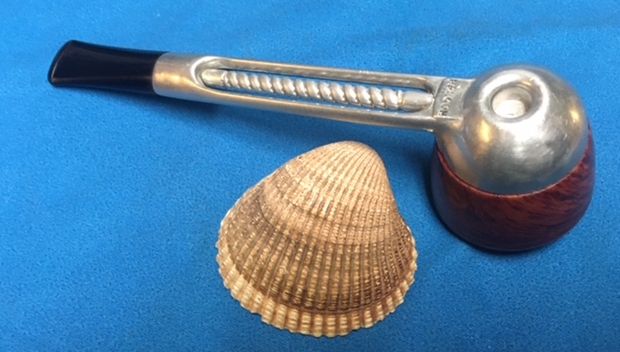