Once again rather than repeat myself about the background, please refer to the previous blog posts on the collection of Bertrams and other brands that Jeff and I purchased. I can’t adequately describe how overwhelmed I am when I look at the 200+ pipes that need to be restored but there is only one way to move ahead – 1 pipe at a time. I am glad Jeff is helping with the clean up on the lot as that would be more than I could handle by myself in moving through this many pipes. From his cleaned pipes I chose a thick shank Billiard Bertram 40 with a crowned rim top. The grain was a mix of cross grain and birdseye. It was a Billiard with a tapered stem. The bowl had cake in the chamber that was no problem. The rim top had some darkening and lava overflow on the back side. There was a chip in the front, inner edge of the bowl and what appeared to be a burn mark on back inner edge. The outer edge of the bowl appeared to be in good condition but we would know more once the bowl had been reamed and cleaned. The exterior of the briar looked lifeless and was dusty with the grime of years of storage. The stem had some oxidation and tooth chatter near the button on both sides. Jeff took some photos of the pipe before he began his cleanup work on it.

Jeff took a close-up photo of the bowl and rim to capture the condition of the pipe when it arrived. The rim top had a coat of lava and the bowl had a thick cake. There is also an obvious nick on the front inner edge of the bowl that will need to be dealt with. 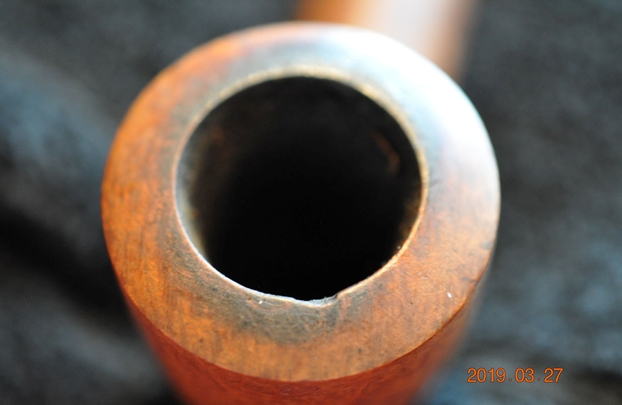 Jeff took pictures of the bowl sides and the heel to show the great looking grain around the sides of the bowl. It really is quite stunning and very dirty! 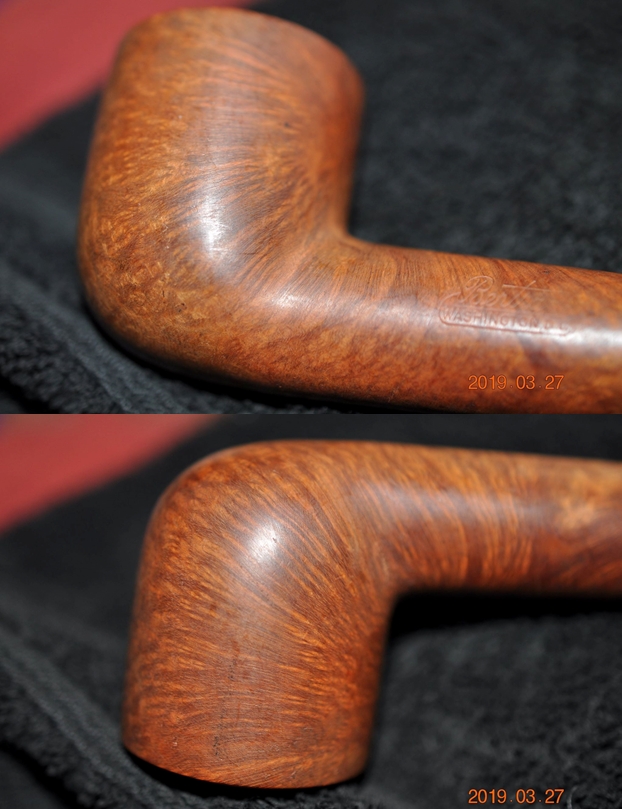 The next two photos show the stem surface. They show the oxidation and the chatter on both sides near the button. There is also some wear on the button edge.

Once again, if you have read the previous Bertram blogs I have posted about the pipes that I have cleaned up so far you can skip the next bit. But if you have not, then I include the link to Bertram history and information. I would recommend that if you don’t know much about them do some research on them. I include a link to the write up on Pipedia (http://pipedia.org/wiki/Bertram). Bertram pipes were based out of Washington DC. They were popular among famous politicians and celebrities of the time. They made many products for them from FDR’s cigarette holders to Joseph Stalin’s favorite pipe. They were considered some of the best America had to offer till they finally closed their doors in the 70s. They graded their pipes by 10s, the higher the grade the better. Above 60s are uncommon and 80-90s are quite rare. I’ve never heard of or seen a 100 grade. I have several blogs that I have written on rebornpipes that give some history and background to Bertram pipes. (https://rebornpipes.com/2015/06/16/an-easy-restoration-of-a-bertram-grade-60-217-poker/).

From this information I have learned that the shape and grade Bertram I have in front of me now was made before the closure of the shop in the 1970s. This Bertram Thick Shank Crowned Billiard is different from the other Bertram shapes I have worked. With a grade 40 stamp it is a more of lower mid-range pipe, though I am not sure why as the briar is very clean and the grain very interesting.

By now if you have been a reader for long you have Jeff’s cleaning regimen pretty well memorized. If you know it you can skip right to the pictures. If not I will include them once more. Jeff reamed the bowl with a PipNet pipe reamer and followed up with a Savinelli Fitsall pipe knife to remove the cake. He scrubbed out the mortise and the airway in the shank and the stem with alcohol, cotton swabs and pipe cleaners. He scrubbed the exterior of the bowl, rim, shank and stem with a tooth brush and Murphy’s Oil Soap to remove the oils and tars on the rim and the grime on the finish of the bowl. He rinsed it under running water. He dried it off with a soft cloth. He was able to remove lava build up on the rim top and you could see the great condition of the bowl top and edges of the rim. There was still some darkening to the rim top toward the back of the bowl. He soaked the stem in Before & After Deoxidizer to remove the oxidation. I took photos of the pipe before I started my work on it. 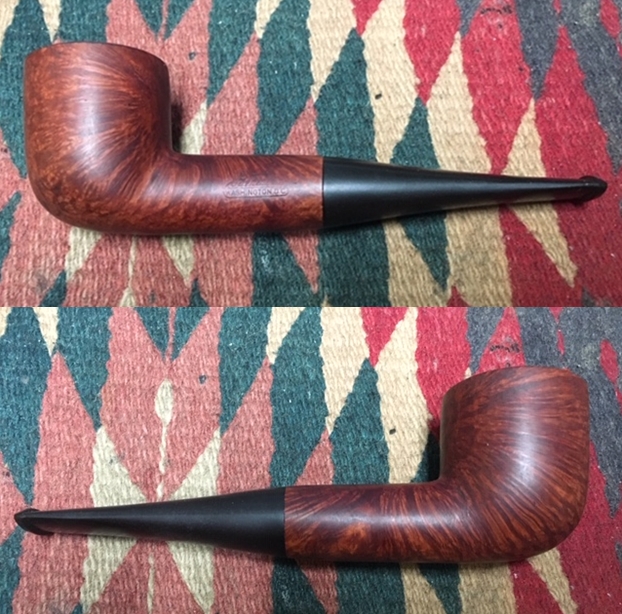 I took a close up photo of the rim top to show the condition of the bowl and rim after Jeff had cleaned up the grime and lava. The damaged area on the front inner edge and a burned area that has damaged the rear inner edge are visible. The stem photos show that the oxidation is gone. The light tooth chatter is hard to see but I should be able to sand it out quite easily. 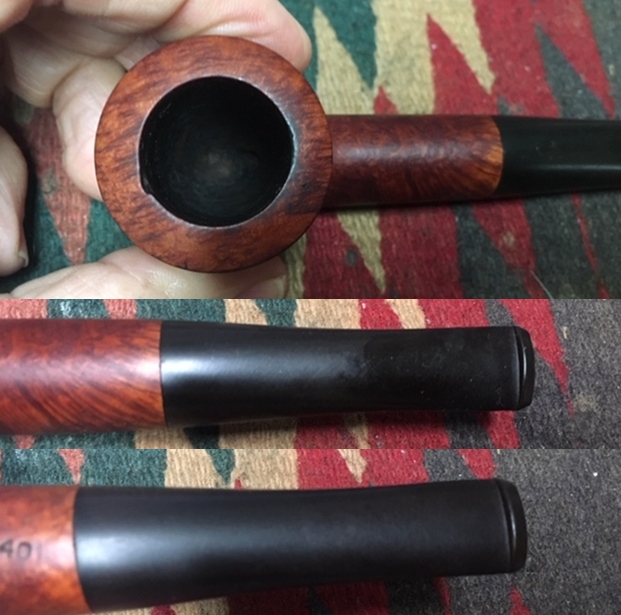 I used a drop of clear super glue to fill in the chip in the inner edge and rim top on the front of the bowl. Once the repair cured, I used a folded piece of 220 grit sandpaper to smooth out the repair and to cleanup the burn damage to the rear inner edge of the rim.

I polished the bowl and rim top with micromesh sanding pads – wetsanding it with 1500-12000 grit pads. I wiped the bowl down with a damp cloth after each pad to remove the sanding debris. The grain began to stand out. After the final sanding pad I hand buffed it with a cotton cloth to raise a shine. 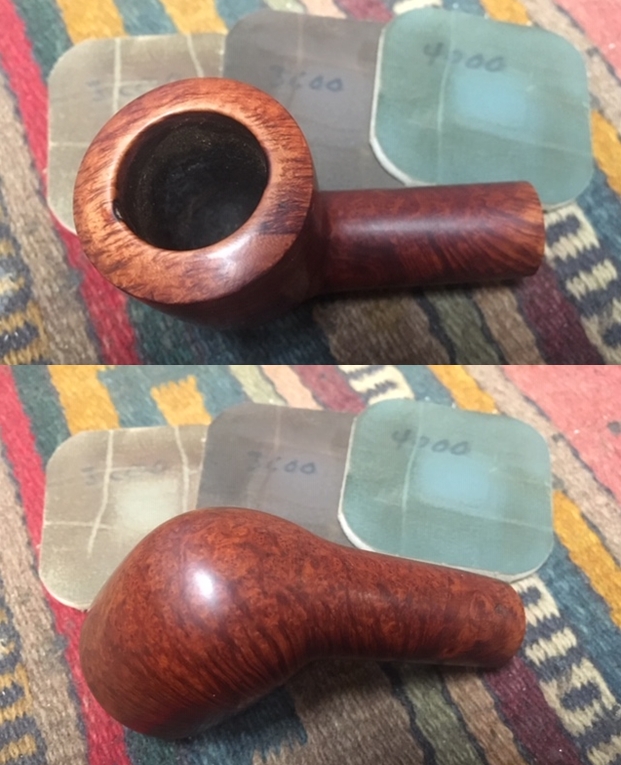 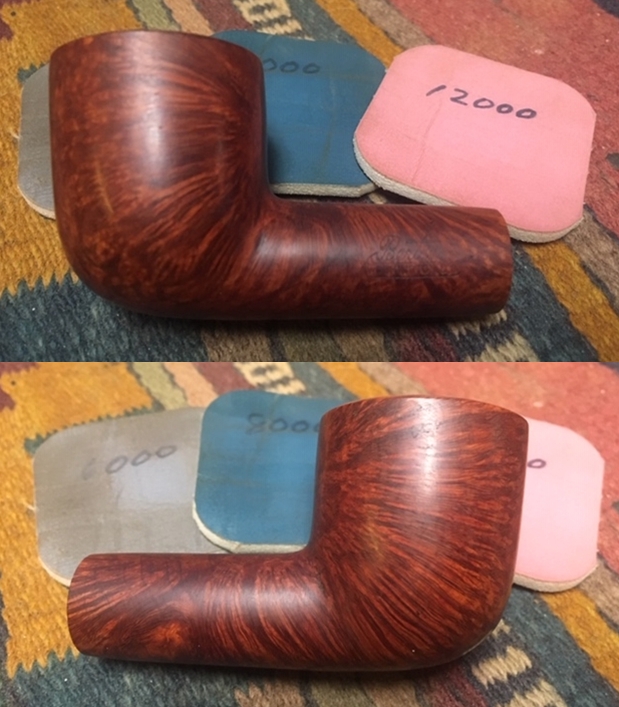 I touched up the rim top with a Maple Stain pen to blend the repairs to the rim top and edge into the rest of the surrounding briar. It did not take much to get a good match. I will need to buff it in the final steps to get the proper look but I am liking it.

I know I have mentioned it before but I really like the balm that Mark Hoover created. It really does wonders on a dry piece of briar. I worked some Before & After Restoration Balm into finish of the briar with my fingertips to clean, enliven and protect it. I let the balm sit for a little while and then buffed with a cotton cloth to raise the shine. The Restoration Balm really makes the grain stands out beautifully. 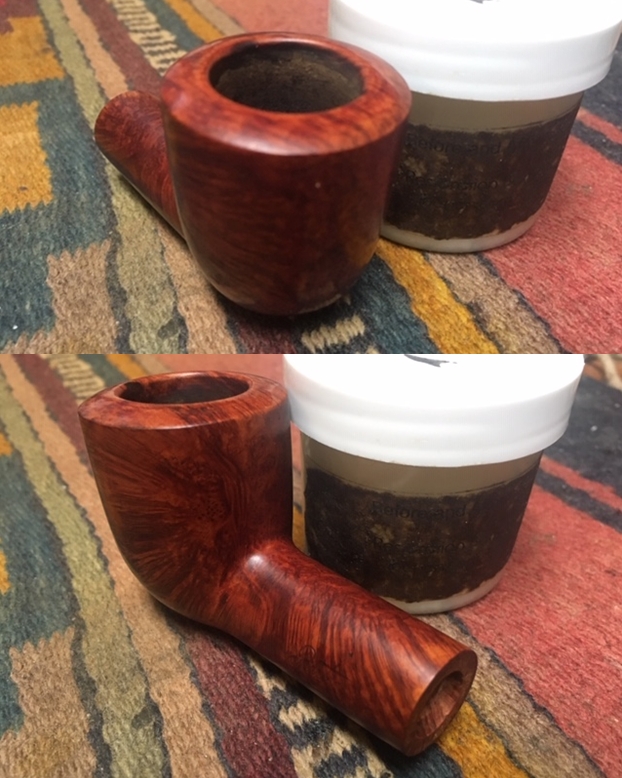 The stem was in pretty decent condition. I polished out the light tooth chatter with micromesh sanding pads – wetsanding it with 1500-12000 grit pads. I wiped the stem down with Obsidian Oil after each pad. I polished it with Before & After Pipe Polish – both Fine and Extra Fine and gave it a final coat and set it aside to dry.

I am having fun doing these pipes from the Bertram Collection. Each one presents different challenges but all are well laid out classic shapes. This is no exception. I put the stem and bowl back together and buffed the pipe with Blue Diamond on the buffing wheel. I polished the briar and the minute scratches still in the vulcanite of the stem until there was a rich shine. This Bertram is a classic Thick Shank Crowned Billiard shape with tapered stem. The finish really highlights some amazing grain on a proportionally well carved pipe. Once I buffed the pipe the briar came alive and the mixture of grain popped with polishing. The black vulcanite stem had a rich glow. The finished pipe is a beautiful grained Billiard. Like the other Bertrams I have worked on this one fits well in the hand and sits right in the mouth. Have a look at it with the photos below. The dimensions are Length: 5 1/2 inches, Height: 1 3/4 inches, Outside diameter of the bowl: 1 1/2 inches, Chamber diameter: ¾ of an inch. This one will soon be on the rebornpipes store. If you are interested let me know. Thanks for walking through the restoration with me as it was a pleasure to work on. 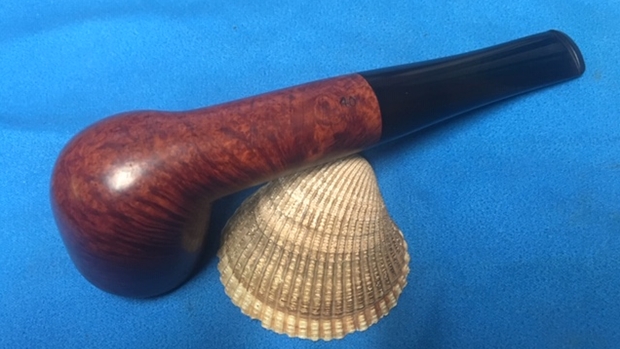 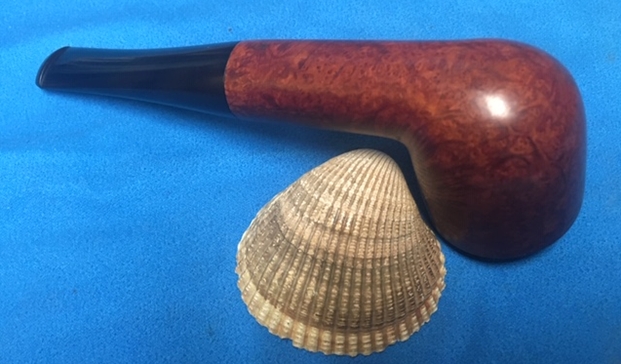 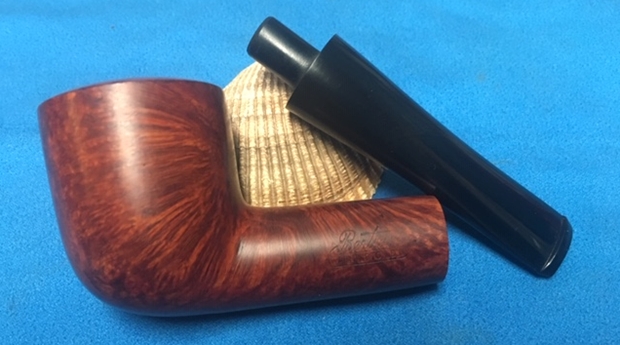 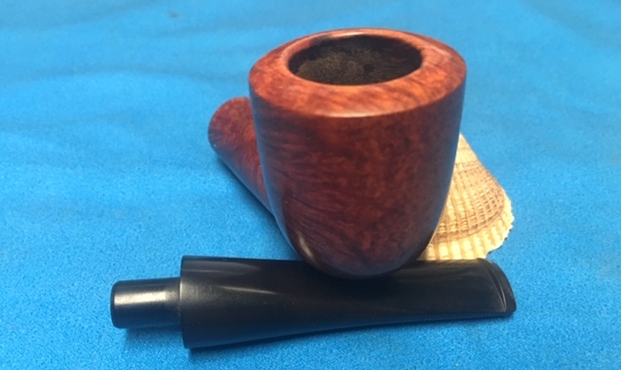