Once in a while I get emails through the blog about pipes that someone wants to sell. These can be estates or they can be a collection that an older pipeman has decided to get rid of by passing it on to someone who can work on them and see that they get into the hands of another pipe smoker. In this case I received an email from a fellow who wanted to sell me a collection of Bertram pipes. We met over FaceTime and he showed the pipe collection to both Jeff and me. We discussed their condition and arrived at a price for the pipes. The majority of the pipes in the collection were Bertrams but there were also some other brands that were known to me. We struck a deal on the lot and he shipped them to Jeff. Jeff took some photos of the collection when it arrived in Idaho. He unwrapped each pipe and filled the three boxes that they were mailed in, and then took a photo to show the size of the collection we had purchased. To be honest it was a bit overwhelming to see all of the collection in boxes. We were looking at a lot of work to bring these back to life.

Jeff chose a group of pipes from the collection and began his work on them He sent me a box with some of the pipes he had cleaned up. This time I thought I would change it up and I chose a long shank C.B.P. Hudson Bay Canadian from the lot to be the third pipe I would work on. The C.B.P. brand was a new one on me. It would be fun to figure out the maker. But first, my initial assessment of the pipe. The smooth finish was dirty but the grain shone through showing me that this was a beautiful pipe. It had a long shank and short stem. There was very little cake in the bowl and the rim top looked almost pristine. The stem was oxidized and had some pitting on both sides. The photos below tell the story and give a glimpse of this interesting pipe. 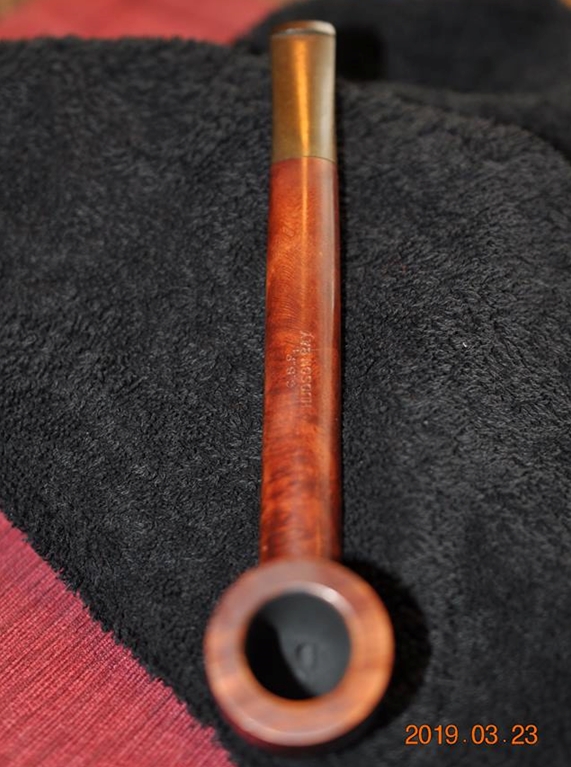 Jeff took a close up photo of the bowl and rim to capture the condition of the pipe before he started his cleanup work. The rim top looked really good. There were some small nicks on the outer edge but other than that it was very clean. The bowl had a very thin cake and was quite clean.

He also took photos of the sides of the bowl and shank to show the interesting grain on the bowl and the heel. The finish is very dirty and it looks like there are a few fills in the briar but this is another interesting pipe. 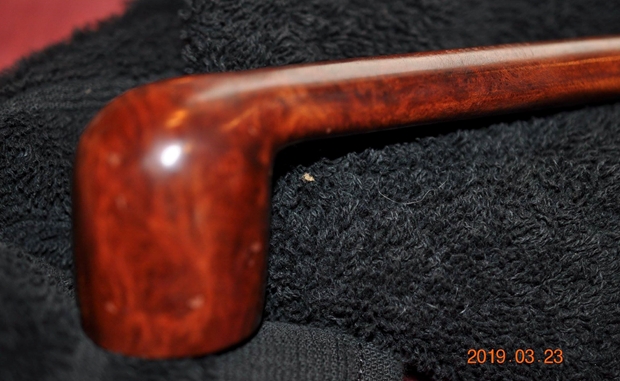 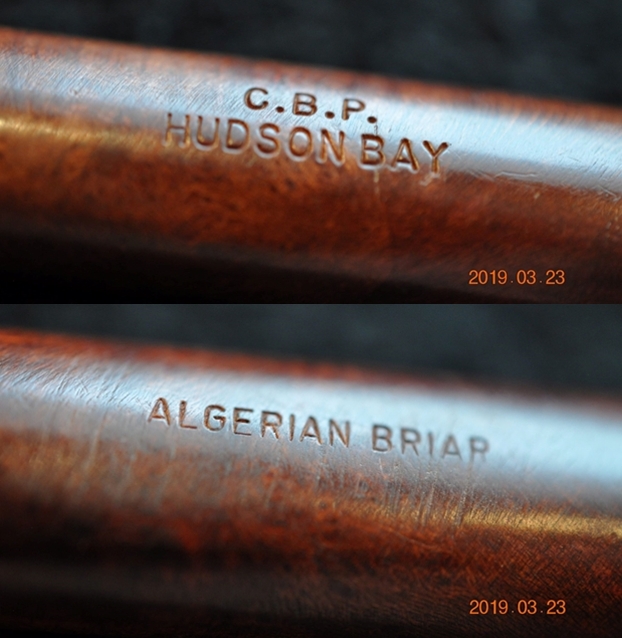 The next two photos show the stem surface. They show the pitting and oxidation on the surface of both sides of the stem. There are also some nicks on the outer edge of the button. The third photo below shows the stinger that is in the tenon once the stem is removed from the shank.

Now it was time to try to unravel the mystery of the stamping on the shank of this pipe. The stamping Algerian Briar was clear but did not tell me who the maker of the pipe was. The clue that I had to work with was the stamping on the top of the shank – C.B.P. Hudson Bay. With that I had two options to check out – would there be a listing anywhere for the C.B.P. brand or would there be anything under Hudson Bay. I turned first to look for anything about the C.B.P. brand. I looked on WMTP (Who Made That Pipe) and there was nothing. I looked on Pipedia and there was nothing. I looked on the PipePhil site and there was nothing. I looked at the same sites for the Hudson Bay stamp. The results were the same. I stopped and paused for a moment and thought about the initials. What brand did I know that fit the C.B.P. logo? There was only one that I could remember – short memory or short list? Your call. That brand was C.B. Perkins. I turned again to PipePhil and Pipedia and I found some help.

First on the PipePhil site (http://www.pipephil.eu/logos/en/logo-c1.html) I found a connection. I have included a screen capture to show what I saw.

Not counting the CBP in an oval logo on the stem what caught my eye was the C.B.P. Heritage stamp on the shank. Now I had the connection I was looking for – C.B.P. was linked to C.B. Perkins. Now I needed to have a look at Pipedia and see what I could find out about the brand.

I checked first in the Pipemaker list by country that is on the site and could not find the brand. I then did a quick search on Pipedian and found this link: https://pipedia.org/wiki/C.B._Perkins. I quote from that site in full.

The first C.B. Perkins store opened in Boston in the early 1900’s. Perkins quickly became the leading retail tobacconist in New England, a position it held for over 75 years. In 1986 Perkins management sold their Pennsylvania and New Jersey stores to DES Tobacco Corporation.

DES is a wholly owned subsidiary of the S. Frieder and Sons Company. S. Frieder and Sons had been a cigar manufacturer since 1920. In 1978 S. Frieder sold its manufacturing business to United States Tobacco so it could focus all its assets and energy on the retail tobacco business under the name of DES Tobacco. Thus, the merger of C.B. Perkins and DES represented four generations of tobacco experience.

There were also some photos of the shop and business card courtesy of Doug Valitchka. I am including those here as well.

Now I knew that I was dealing with a Tobacco Pipe Shop pipe from C.B. Perkins. However they did not make pipes but tended to have pipes made for them by English pipe maker such as Comoys, GBD and others. So that is where the hunt ends. There are no COM stamps on the pipe and no shape numbers to help nail down a maker. The shape reminds me a lot of both of those makers. But at least I know what the C.B.P. stamp means. Now it is time to work on this pipe.

Jeff reamed the bowl with a PipNet pipe reamer and followed up with a Savinelli Fitsall pipe knife to remove the cake. He scrubbed out the mortise and the airway in the shank and the stem with alcohol, cotton swabs and pipe cleaners. He scrubbed the exterior of the bowl, rim, shank and stem with a tooth brush and Murphy’s Oil Soap to remove the grime on the finish of the bowl. He rinsed it under running water. He dried it off with a soft cloth. He soaked the stem in Before & After Deoxidizer to remove the oxidation. I took photos of the pipe before I started my work on it. 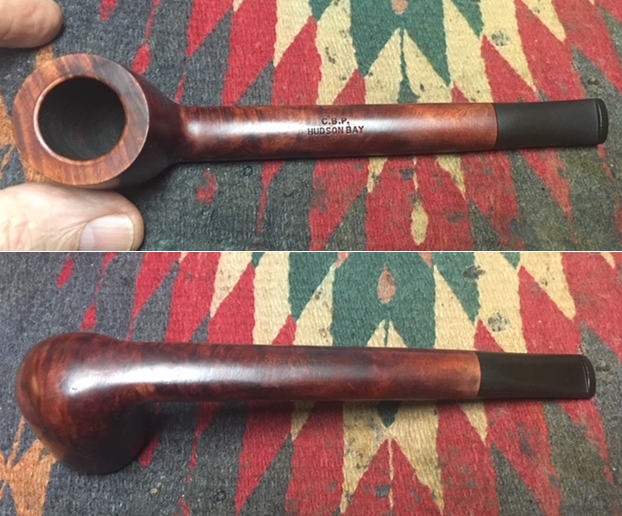 I took a close up photo of the rim top to show the scratching and nicks on the top. Other than those issues it was in great condition. Both the inner edge and the outer edge of the rim look really good. The stem photos show the pitted surface of the vulcanite and some nicks in the button edge on both sides. There were no tooth marks or chatter on this stem.

I also took a photo of the stamping on the top and underside of the shank showing how the stamping was laid out.

I polished the rim top and the rest of the briar with micromesh sanding pads – wetsanding it with 1500-2400 grit pads and dry sanding it with 3200-12000 grit pads. I wiped the bowl down with a damp cloth after each pad to remove the sanding debris. After the final sanding pad I hand buffed it with a cotton cloth to raise a shine. 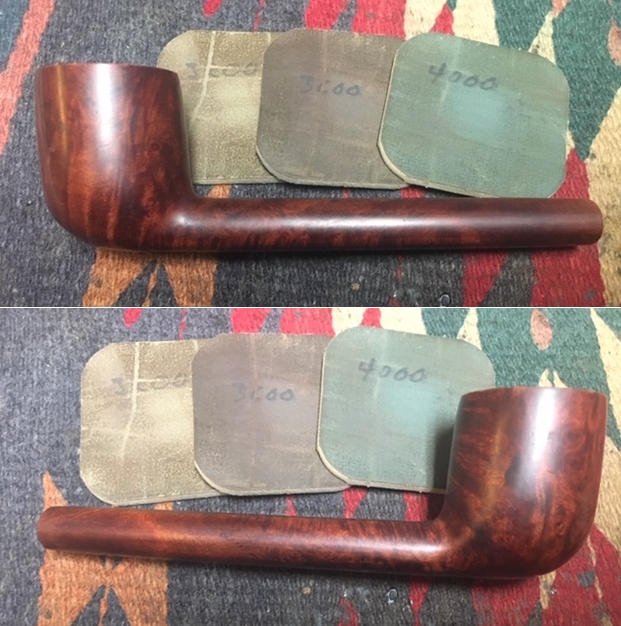 I worked some Before & After Restoration Balm into finish of the briar with my fingertips to clean, enliven and protect it. I let the balm sit for a little while and then buffed with a cotton cloth to raise the shine. Once again I am surprised by how the Balm really makes the grain stand out. The pipe really looks good at this point and the grain stands out beautifully. I am very happy with the results. 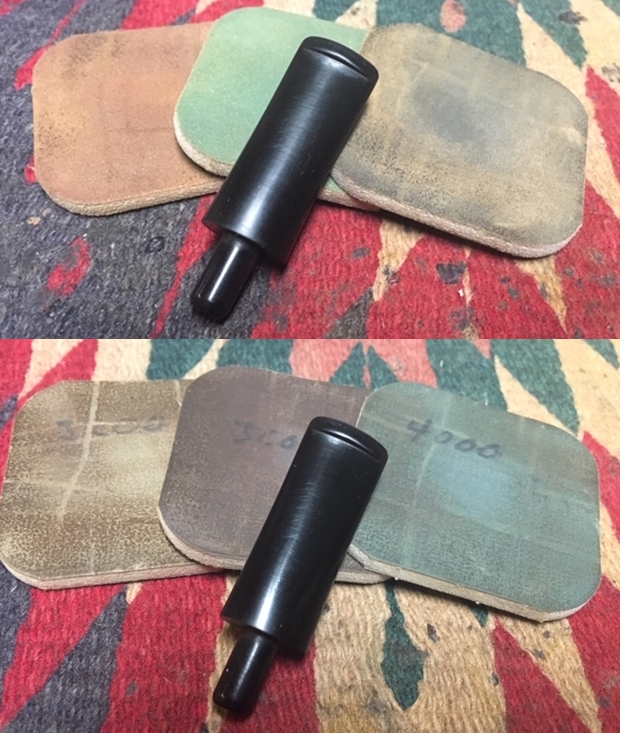 I put the stem and bowl back together and buffed the pipe with Blue Diamond on the buffing wheel. I polished the briar and the vulcanite stem until there was a rich shine. The polished briar came alive with buffing and the straight, swirled and flame grain just popped with polishing. The black vulcanite stem developed a rich glow. The finished pipe is a long shank Canadian shaped pipe that really is a comfortable handful of briar. Have a look at it with the photos below. The dimensions are Length: 7 inches, Height: 1 7/8 inches, Outside diameter of the bowl: 1 3/8 inches, Chamber diameter: ¾ of an inch. This is another pipe that I will be putting this one on the rebornpipes store sometime in the days ahead. If you are looking for a long shank Canadian from a historic Pipe Shop – C.B. Perkins this might just be what you are looking for. Let me know if you are interested. Thanks for walking through the restoration of this with me it was a pleasure to work on. 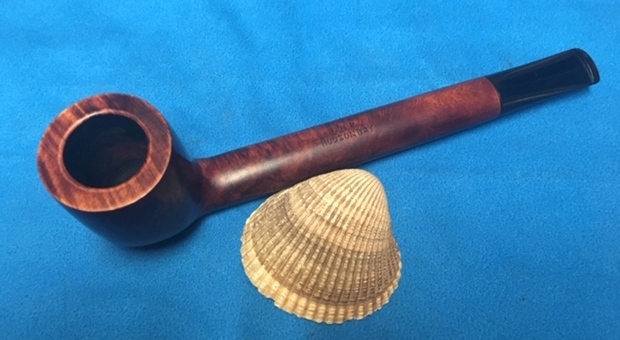 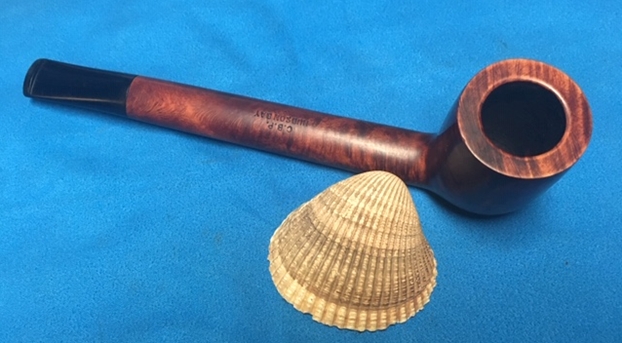 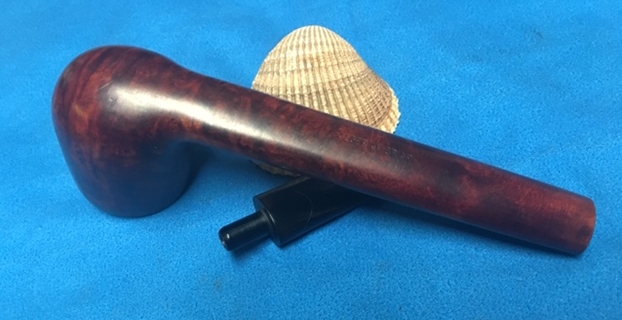