In my ongoing work on Bob Kerr’s Estate I feel like I am finally making a dent. I am working my way through the Dunhills in his collection – the Shell and Tanshell pipes. I am cleaning them for the family and moving them out into the hands of pipemen and women who will carry on the trust that began with Bob and in some pipes was carried on by Bob. In the collection along with the Dunhills are a good bevy of Petersons, some Comoy’s and Barlings as well as a lot of other pipes – a total of 125 pipes along with a box of parts. This is the largest estate that I have had the opportunity to work on. I put together a spread sheet of the pipes and stampings to create an invoice. I was taking on what would take me a fair amount of time to clean up. I could not pass up the opportunity to work on these pipes though. They were just too tempting. I sorted the pipes into groups of the various brands and had a box of 25 different Dunhill pipes in different shapes, styles and sizes. I decided to work on the Dunhills first. It was a great chance to see the shape variety up close and personal. The photo below shows the box of Dunhill pipes.

I am making progress on the 25 Dunhills with only 12 more to go. I went through the box of Dunhills shown above and chose the 13th sandblast pipe to work on – it is another Group 4 but this time a Tanshell Prince. It is stamped on the underside of the bowl heel and the shank with the following information. The letters FE F/T which make this a Prince shape with a Fantail stem are followed by Dunhill over Tanshell. Next to that it is stamped Made in England 7 – which dates it as being made in 1968. That is followed by a Circle 4T – Group 4 size Tan Shell. The round shank flows into a tapered fishtail stem that is oxidized and has tooth marks and chatter near the button. There is some calcification on the first inch of the stem ahead of the button and there is some light damage to the top of the button. The Tanshell finish is dirty but nonetheless there is something quite beautiful about the pipe. There is grime and tars filling in much of the craggy finish. The bowl had a thick cake and some lava overflowed on the rim top. There appears to be a little damage on the front inner edge of the rim but after cleaning I will know more. I took pictures of the pipe before I started working on it. 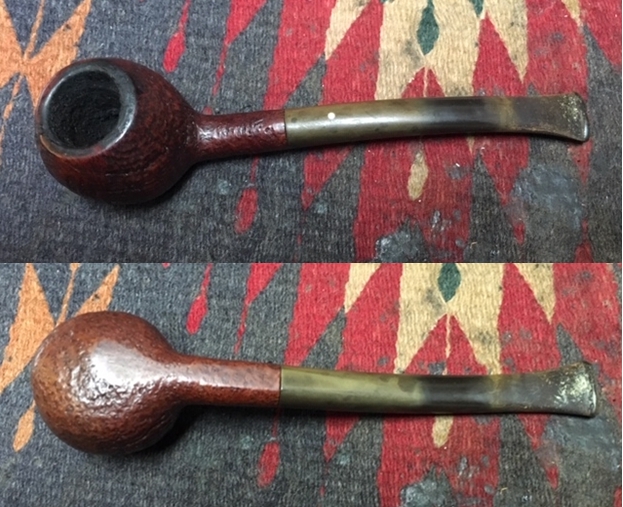 I took some close up photos of the rim top and the stem to show what I was dealing with. This Tanshell Prince was in decent shape all things considered. The cake in the bowl was quite thick and the lava on the rim top was also very present. You can see the cake and tobacco in the bowl. The stem was dirty, oxidized, calcified and had a lot of tooth chatter on the top and underside for about an inch ahead of the button. 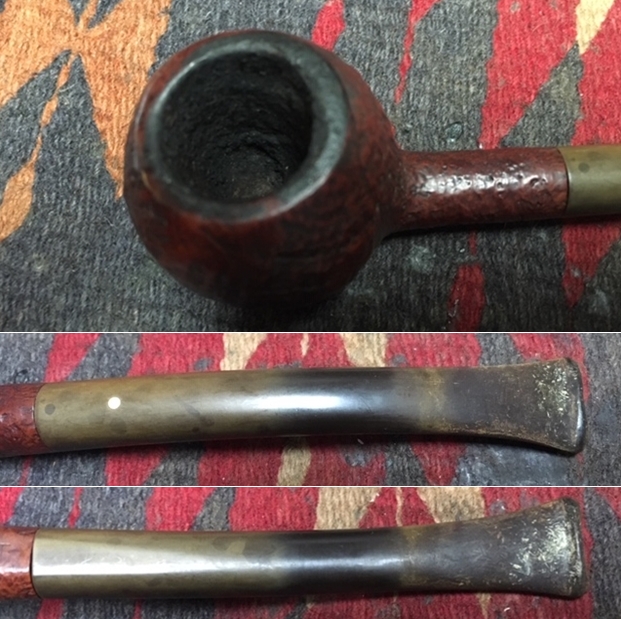 I took a photo of the stamping on the underside of the bowl and shank. It was very weak but still readable under bright light with a lens. 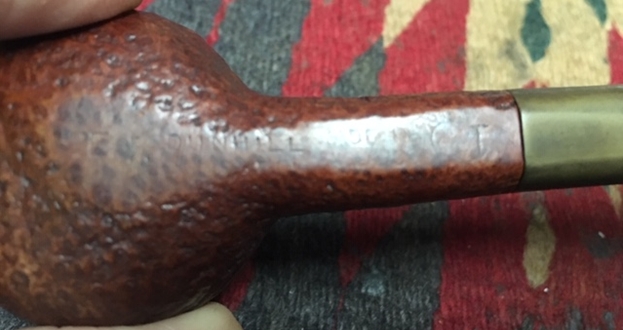 I removed the stem and was surprised to find that a repairman had replaced an obviously broken tenon with a white nylon/Teflon tenon. It fit perfectly but was a surprise nonetheless. 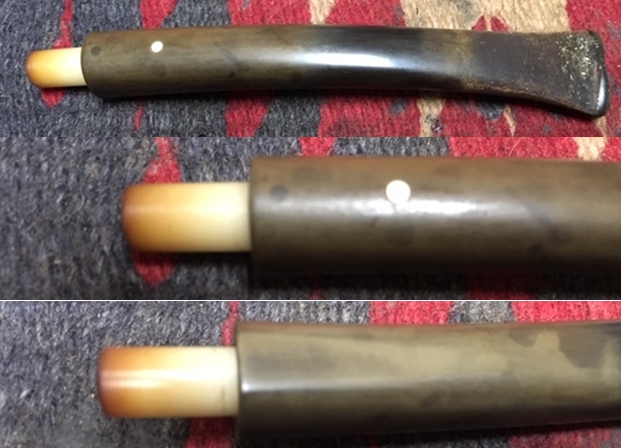 I am sure if you have read the restoration work on the previous pipes you have already read what I included about Bob Kerr, the pipeman who held these pipes in trust before I came to work on them. Also, if you have followed the blog for long you will already know that I like to include background information on the pipeman whose pipes I am restoring. For me, when I am working on an estate I really like to have a sense of the person who held the pipes in trust before I worked on them. It gives me another dimension of the restoration work. I asked Brian if he or his wife would like to write a brief biographical tribute to her father, Bob. His daughter worked on it and I received the following short write up on him and some pictures to go along with the words. Thank you Brian and tell your wife thank you as well. 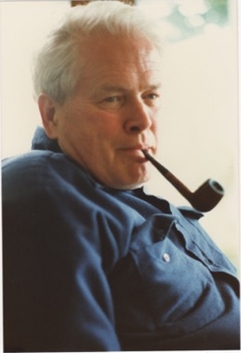 I am delighted to pass on these beloved pipes of my father’s. I hope each user gets many hours of contemplative pleasure as he did. I remember the aroma of tobacco in the rec room, as he put up his feet on his lazy boy. He’d be first at the paper then, no one could touch it before him. Maybe there would be a movie on with an actor smoking a pipe. He would have very definite opinions on whether the performer was a ‘real’ smoker or not, a distinction which I could never see but it would be very clear to him. He worked by day as a sales manager of a paper products company, a job he hated. What he longed for was the life of an artist, so on the weekends and sometimes mid-week evenings he would journey to his workshop and come out with wood sculptures, all of which he declared as crap but every one of them treasured by my sister and myself. Enjoy the pipes, and maybe a little of his creative spirit will enter you!

I have included one of Bob’s wood carvings to give you an idea of what he daughter wrote about above. You can see his artistry in the carving that is patterned after British Columbia’s Coastal First Nations people. To me this is a sea otter but perhaps a reader may enlighten us.

Having already worked on 12 other pipes from Bob’s estate I had a pretty well knew how he used and viewed his pipes. I am coming to the end of the Shell and Tanshell pipes (1 more Shell Briar billiard to go). I had learned to tell which pipes were his favoured ones and which were his work horses. I could get a sense of the ones that accompanied him into his carving shop. In many ways it was as if he was standing over my shoulder while I cleaned up his pipes. This particular pipe was tired but the cake and lava on the rim should have been more. With the stem off and seeing that it was a repair pipe I could understand why. This one would have been an earlier repair than the billiard I just finished.With that in mind I turned to work on the 13th of his pipes. I reamed the bowl to remove the cake on the walls and the debris of tobacco shards that still remained. I used a PipNet pipe reamer to start the process. I followed that with a Savinelli Fitsall Pipe Knife to clean up the remaining cake in the conical bottom of the bowl. I sanded the bowl with 220 grit sandpaper wrapped around a piece of dowel. It smooths out the walls and also helps bring the inner edges back to round.

With the bowl reamed and rim top cleaned I scrubbed the sandblast finish. This is pretty much my process in cleaning either sandblast or rusticated finishes. I scrubbed it with undiluted Murphy’s Oil Soap and a tooth brush to remove the grime from the grooves and canyons of the blast. I worked over the tarry lava overflow on the rim with the tooth brush and a brass brush. I rinsed the pipe under running water to remove the grime. I dried it off with a soft towel. The pictures below show the finish after scrubbing and rinsing. 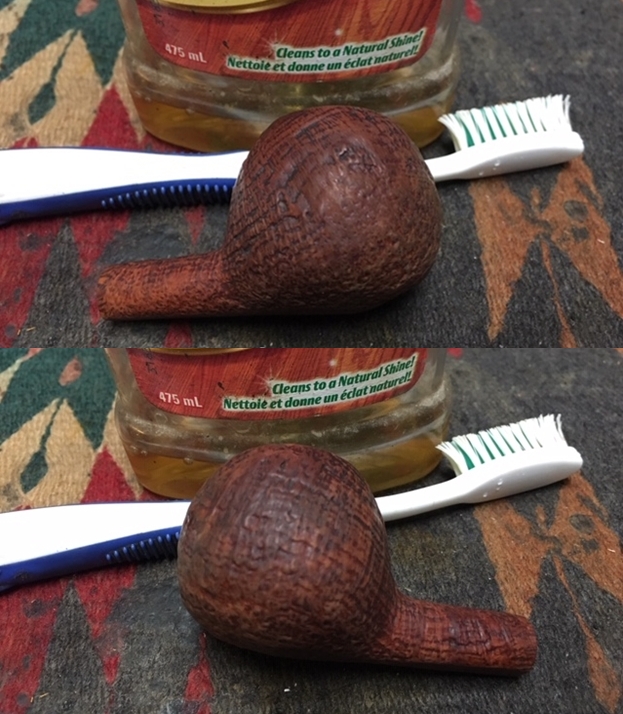 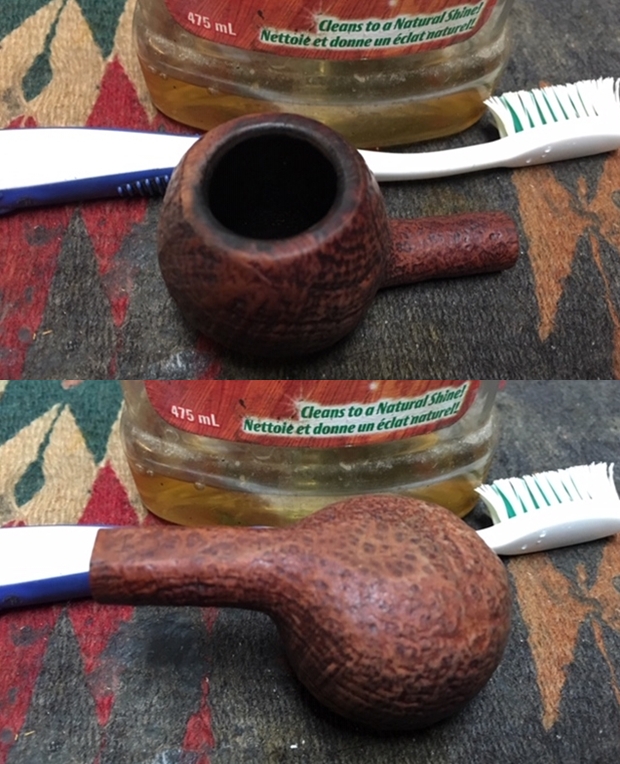 I worked some Before & After Restoration Balm into the sandblast finish of the bowl and the rim top. I worked it into the nooks and crannies of the sandblast surface with my fingertips to clean, enliven and protect the wood. I let the balm sit for about 20 minutes and buffed it off with a soft cotton cloth and then polished it with a horsehair shoe brush. I took photos of the pipe at this point in the process to show what the bowl looked like at this point. 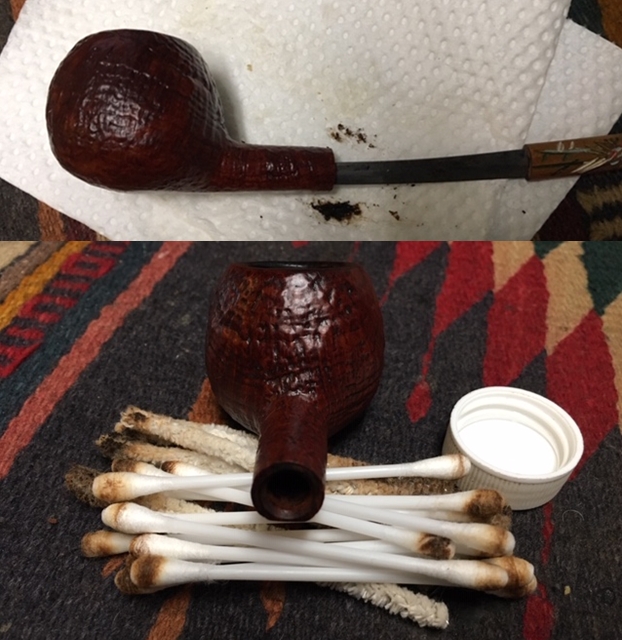 I gave the bowl several coats of Conservator’s Wax and buffed it with a shoe brush after each coat of wax to raise the shine. The bowl looks really good at this point. The sandblast grain just shines and is showing all of the different layers of colour that make up a Dunhill Tanshell finish. 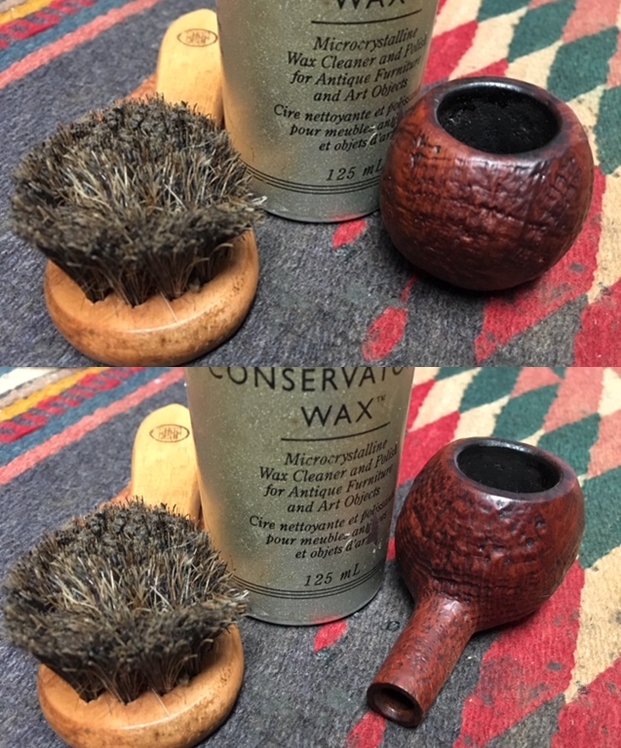 I set the bowl aside and turned my attention to the stem. I sanded out the majority of the marks and tooth chatter on the surface of the vulcanite with a folded piece of 220 grit sandpaper. I followed the 220 grit sandpaper with 400 grit wet dry sandpaper to minimize the scratching. The two papers combined did a pretty decent job of getting rid of the tooth marks and chatter as well as the oxidation and calcification. I cleaned up the Teflon/Delrin white tenon as much as possible without changing the diameter.

I polished the stem with Denicare Mouthpiece Polish to take out the oxidation at the button edge and on the end of the mouthpiece. I also worked hard to scrub it from the surface of the stem at the tenon end. 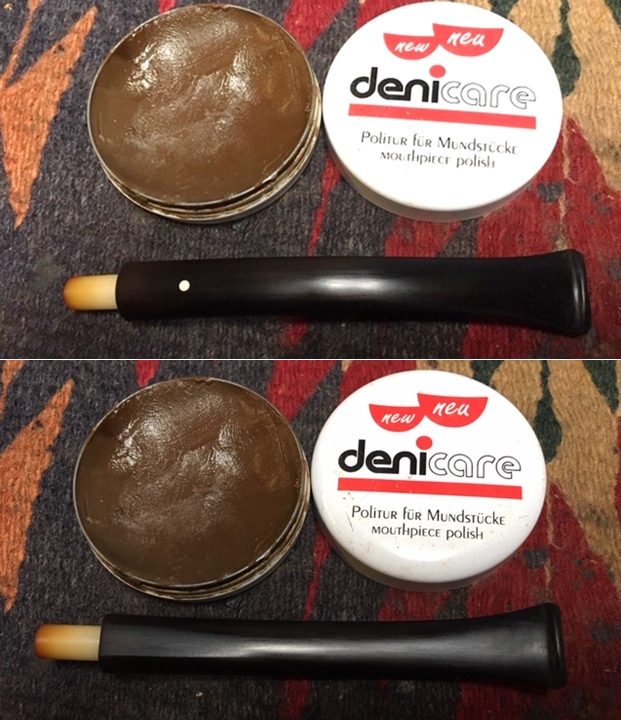 I polished out the scratches with micromesh sanding pads – wet sanding with 1500-2400 grit pads and dry sanding with 3200-12000 grit pads. I wiped the stem down after each sanding pad with Obsidian Oil. I polished it with Before & After Pipe Stem Polish – both Fine and Extra Fine. Once I had finished the polishing I gave it a final coat of oil and set it aside to dry.

I put the bowl and stem back together. I polished the bowl and stem with Blue Diamond to polish out the scratches in the briar, the nickel band and the vulcanite. I gave the bowl multiple coats of Conservator’s Wax and the stem multiple coats of carnauba wax. I buffed the pipe with a clean buffing pad to raise the shine. I hand buffed it with a microfiber cloth to deepen the shine. The pipe polished up pretty nicely. The contrast of colours that show up in the sandblast of the Tanshell briar bowl looked good with the polished black vulcanite. This Tanshell FE F/T Prince will soon be heading to India to be enjoyed by the next pipeman who has taken on the trust of Bob’s pipes. It really has that classic Dunhill Prince shape that catches the eye. The finished pipe is shown in the photos below. The dimensions of the pipe are Length: 6 ¼ inches, Height: 1 1/2 inches, Outside diameter of the bowl: 1 ¼ inches, Chamber diameter: 3/4 of an inch. This is the 13th Dunhill and the 2nd Tanshell from the many pipes that will be coming onto the work table from the estate. Thanks for reading this blog and my reflections on the pipe while I worked on it. I am having fun working on this estate. 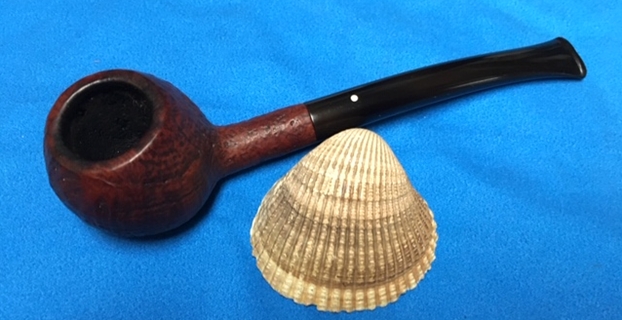 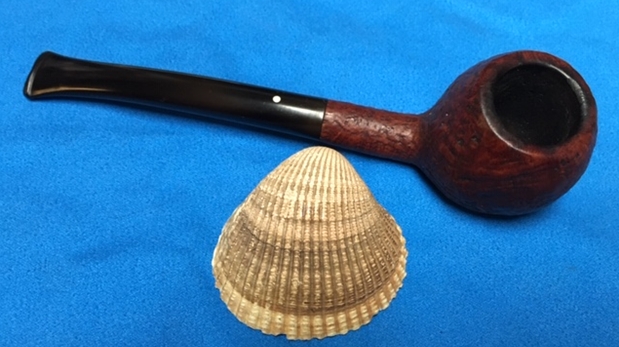 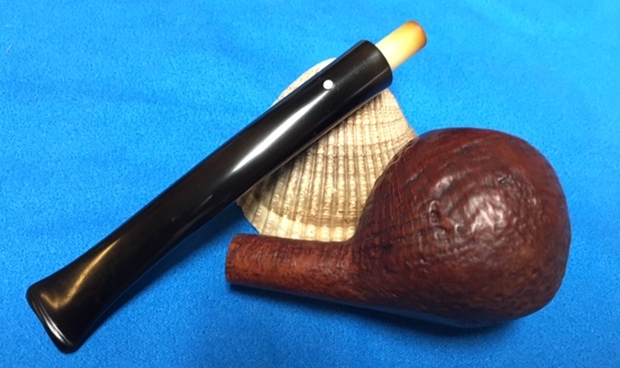 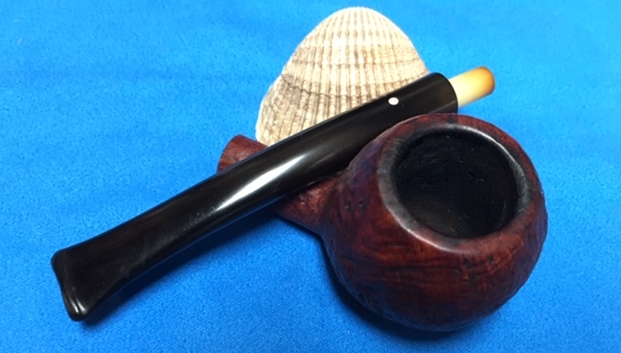 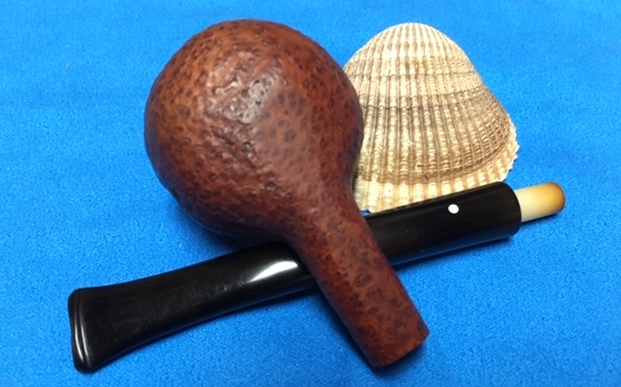 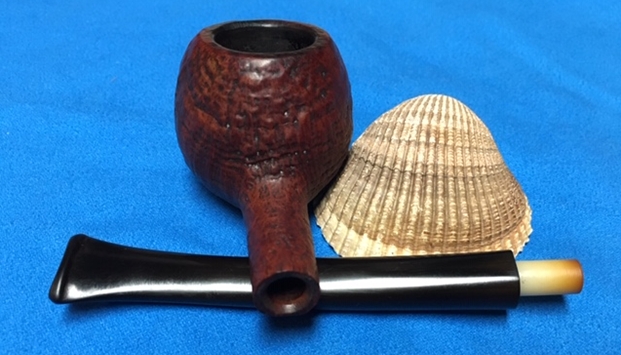