The next pipe on the work table is another pipe that has been here for over 5 years. Sad that there are some that have sat this long or longer before I got to them. But on the other hand I get to look through my boxes and pick out what turns my crank at the moment. This one was a nice looking bent apple with interesting mixed grain. We picked it up back in March, 2017 off EBay from a seller in Saylorsville, Pennsylvania, USA. It is stamped on the underside of the shank and reads Viking Classic [over] Handmade [over] In Denmark. The shank extension/shank band is a combination of polished aluminum on top of a black acrylic. It is quite nice with the reds and browns of the briar and the black vulcanite stem. The poor pipe was another one that had obviously been someone’s favourite and must have been a grand smoker. The finish appears to have some nice mixed  grain around the bowl and shank that even stands out with the grime on the finish. The bowl is heavily caked with a thick lava overflow on the rim top. The inner edge was also thickly caked with lava. The stem is quite oxidized, calcified and had a lot of tooth chatter on the top and underside and on the button itself. The pipe showed a lot of promise but it was a mess. Jeff took pictures of the pipe before he did his clean up work.

He took photos of the rim top and bowl as well as the stem surfaces to show the condition of the well smoked pipe. You can see the thick cake in the bowl and the heavy lava on the beveled inner edge and flat rim top. The stem was oxidized, calcified and had tooth chatter on both sides ahead of the button as well as tooth marks on the surface of the button itself.

Jeff took some photos of the heel of the bowl and the side to give a sense of the beauty of the grain around this pipe. 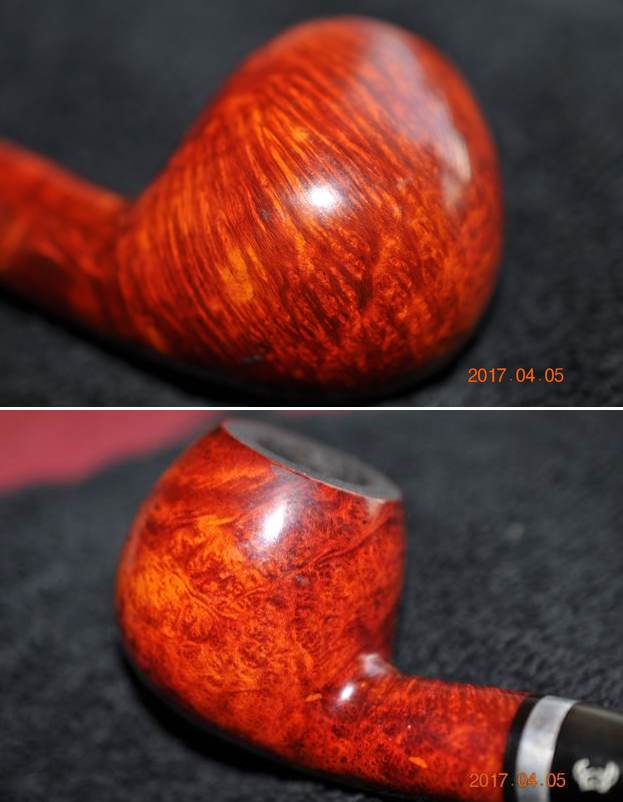 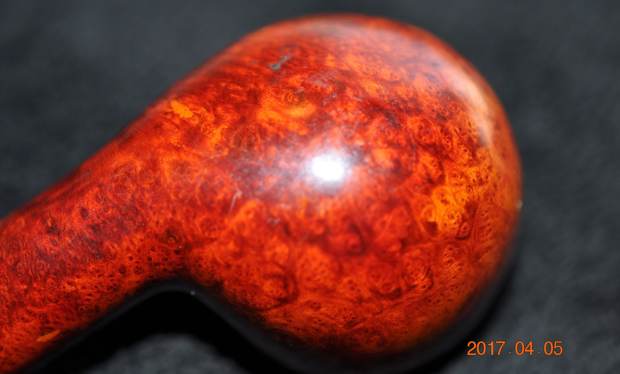 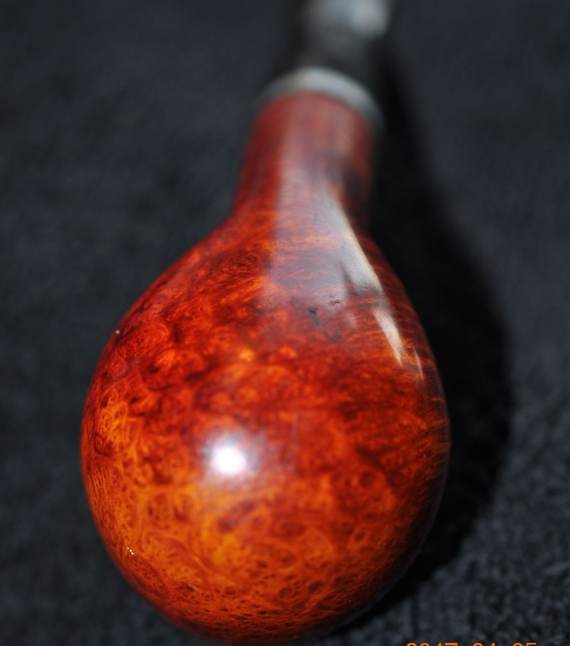 He captured the stamping on the underside of the shank. It is readable as noted above. He also took a photo of the stamped Viking helmet on the left side of the taper stem. There are also some fills around the bowl and shank. Most of them are blended in very well.

I turned to Pipephil to get a quick overview of the background information on the Viking brand (http://pipephil.eu/logos/en/logo-v2.html). I had vague memories of the pipe being connected to Bjarne but was not certain. I have included a screen capture of the pertinent information below.

I turned then to the information on Pipephil for Bjarne pipes (http://pipephil.eu/logos/en/logo-b5.html#bjarne). The link gave information that stated the brand was a Bjarne second. I quote from that link below.

High grade pipes were stamped “Bjarne Nielsen” without any logo on the mouthpiece and graded A, B, C and D.

Now it was time to look at it up close and personal. Jeff had done an amazing job in removing all of the cake and the lava on the rim top. He had reamed the bowl with a PipNet Pipe Reamer and cleaned up the remnants with a Savinelli Fitsall Pipe Knife. He took the cake back to bare briar so we could check the walls for damage. He scrubbed the exterior of the bowl with Murphy’s Oil Soap and a tooth brush to remove the grime on the bowl and rim and was able to remove the lava and dirt. The inner edge of the bowl had a lot of damage and there were some damage on the rim top. He cleaned out the interior of the bowl and shank with pipe cleaners, cotton swabs and alcohol until they came out clean. He cleaned the stem with Soft Scrub to remove the grime on the exterior then soaked it in Before & After Pipe Stem Deoxidizer. He cleaned out the airway with alcohol, cotton swabs and pipe cleaners. I took some photos of the pipe before I started my work on it today. 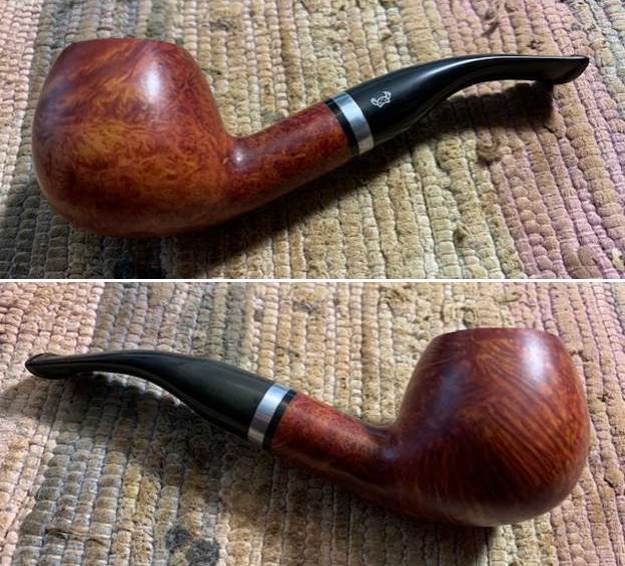 I took a close up photo of the cleaned up rim top. The rim top and the beveled inner edge look very good. The bowl is clean and the walls are undamaged. The stem looks good with tooth marks and chatter along the top and underside ahead of the button.

I took the stem off the pipe and took a photo. The Apple is a nicely designed pipe with nice lines. 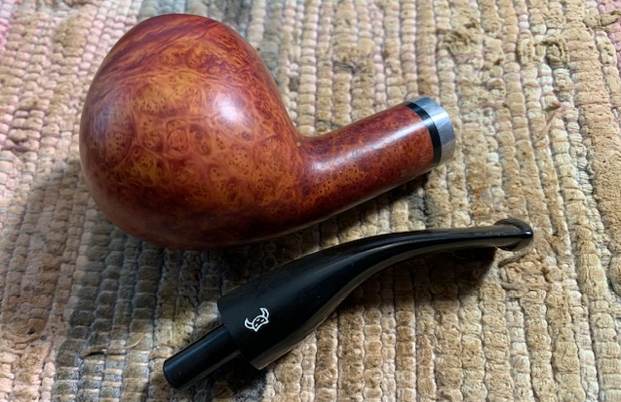 I polished the briar with micromesh sanding pads – dry sanding with 1500-12000 grit pads. I worked over the inner and outer edge of the rim as well. After each pad I wiped the bowl down with a damp cloth to remove the sanding debris. It really took on a shine by the last three sanding pads. 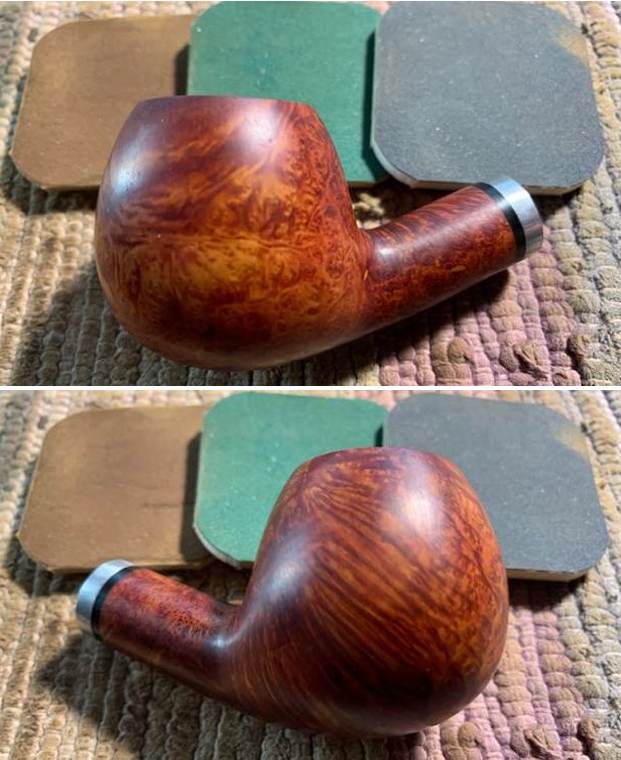 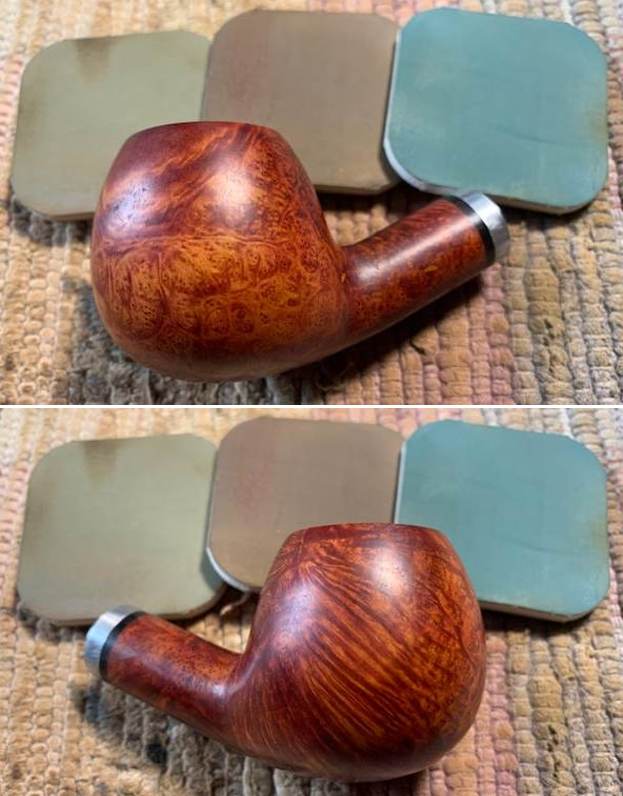 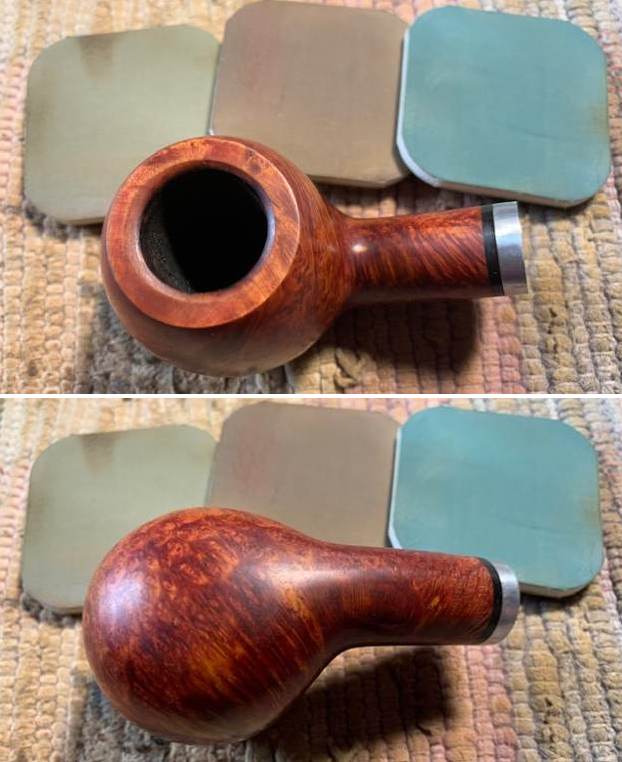 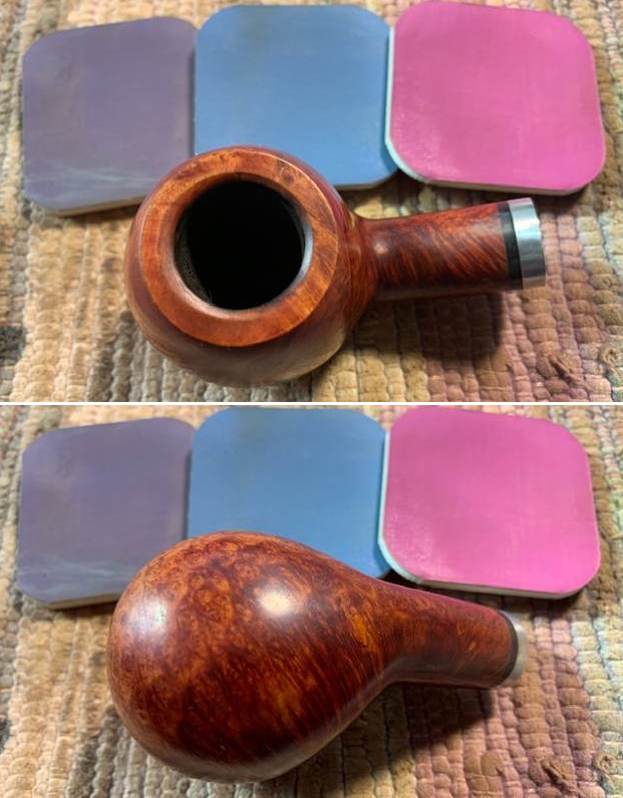 I rubbed the bowl down with Before & After Restoration Balm. I worked it into the surface of the briar with my fingertips where it works to clean, restore and preserve the briar. I let it do its magic for 15 minutes then buffed it off with a cotton cloth. The pipe looks incredibly good at this point in the process. 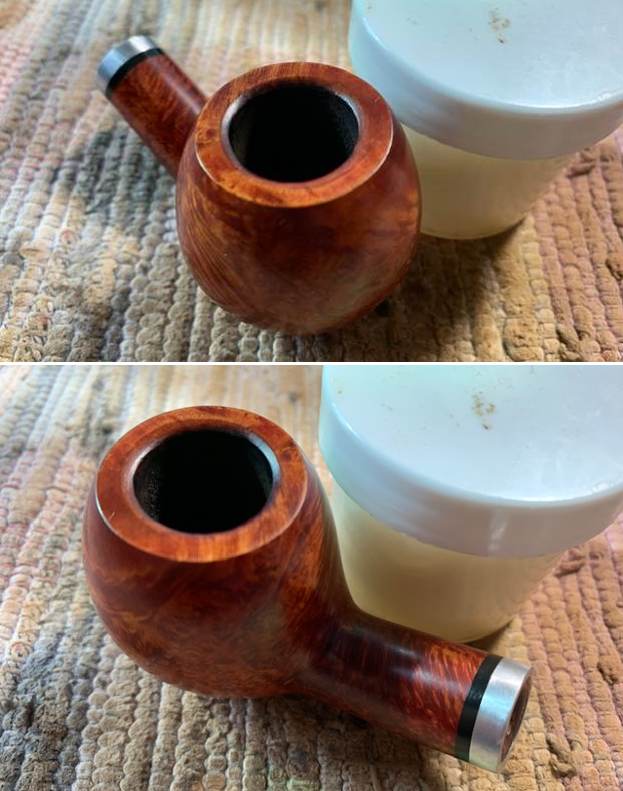 I set aside the bowl and turned my attention to the stem. I “painted” the surface of the stem with the flame of a Bic lighter to raise the tooth marks. I was able to raise many of them. Those that remained I filled in with black super glue and set it aside to cure.

Once the repair had cured I used a small file to reshape the button and flatten out the button. It would take more work with the sandpaper to fully reshape it. I shaped it further with 220 grit sandpaper and started the polishing with 400 grit wet dry sandpaper. It was beginning to take shape. 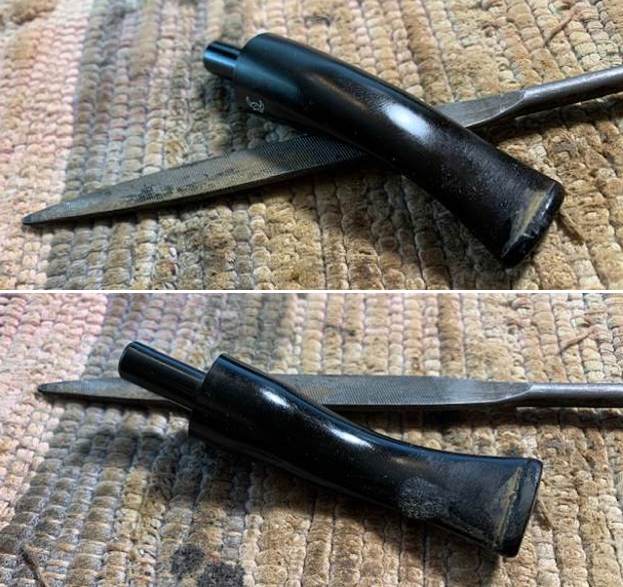 I continued to polish the stem with micromesh sanding pads – wet sanding with 1500-12000 grit sanding pads. I wiped it down after each sanding pad with Obsidian Oil. I polished it further with Before & After Stem Polish – both Fine and Extra Fine. I gave it a final coat of Obsidian Oil and set it aside to cure.

I am excited to finish this Viking Classic Handmade Danish Apple. I put the pipe back together and buffed it with Blue Diamond on the buffing wheel. I gave the bowl and the stem multiple coats of carnauba wax. I hand buffed the pipe with a clean buffing pad to raise the shine. It is fun to see what the polished bowl looks like with beautiful straight grain all around it and the birdseye on the rim top. The polished grain on the pipe looks great with the black vulcanite stem. This smooth Viking Classic Apple is great looking and the pipe feels great in my hand. It is light and well balanced. Have a look at it with the photos below. The dimensions are Length: 5 ½ inches, Height: 1 ¾ inches, Outside diameter of the bowl: 1 ¼ inches, Chamber diameter: ¾ of an inch. The weight of the pipe is 55 grams/1.94 ounces. It turned out to be a beautiful pipe. I will soon be putting it on the rebornpipes store in the Danish Pipemakers section. If you are interested in adding it to your collection let me know. Remember we are the next in a long line of pipe men and women who will carry on the trust of our pipes until we pass them on to the next trustee. Thanks for your time reading this blog. 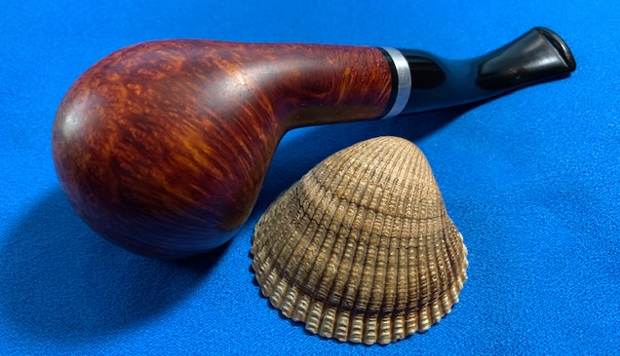 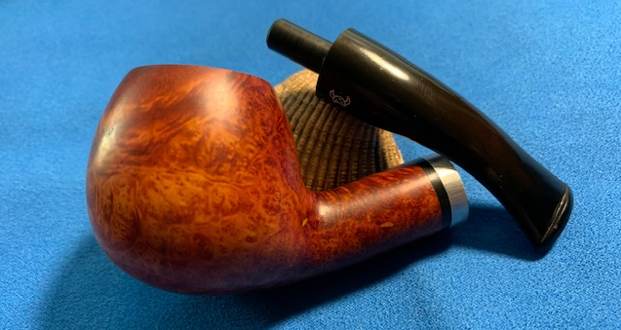 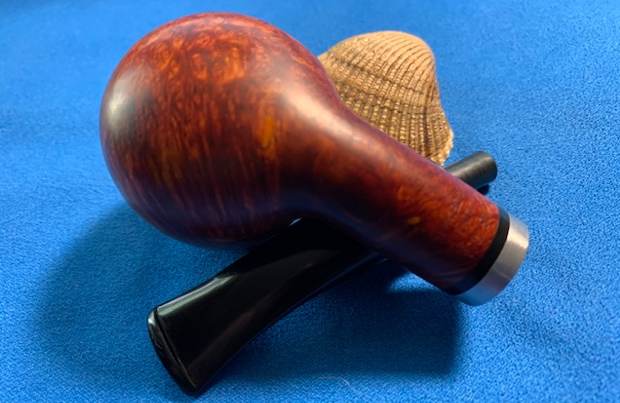 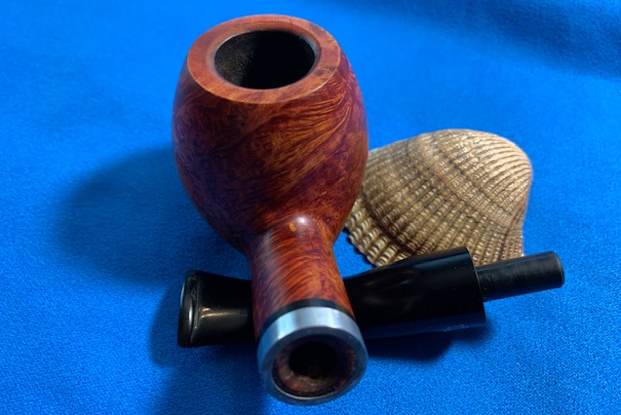 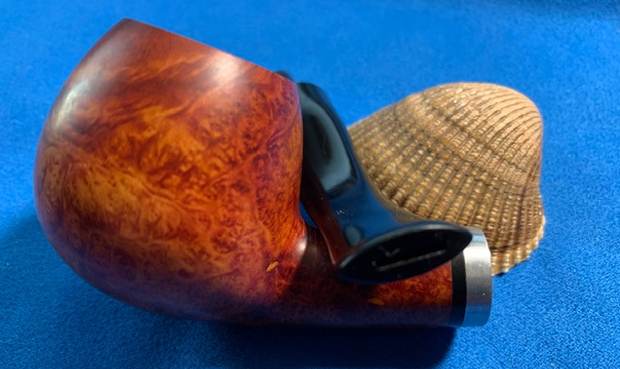