It is another hot day in Vancouver with just some afternoon meetings. After a long week I decided to take bit of time this morning for myself. It is hot enough that I went to the cool of the basement to work on pipes. The next pipe on the table is another one that came to us from the auction in Gonzales, Louisiana, USA. The first one, a Castello Sea Rock Briar KKK16 Billiard, I cleaned up and wrote a blog about yesterday (https://rebornpipes.com/2021/06/24/i-really-love-these-castello-sea-rock-briar-pipes-a-sea-rock-briar-kkk16/). This next one is a Castello Sea Rock Briar and it is what Castello calls a Bent Billiard shape though to me it is like a bent egg. It is a pipe that I like so well that I am cleaning it up for myself. It is stamped on the smooth shank bottom and reads Castello [over] Sea Rock Briar followed by KKKK65. That is followed by Made in Cantu [over] Italy followed by an oval containing the name Carlo Scotti next to the stem shank union. The Castello “diamond” inset is on the left side of the saddle stem letting me know this was a pipe made for US import. On the underside of the stem it is stamped Hand Made [over] Castello with no number. The bowl had a heavy cake and there was thick lava overflow on back top side and inner edge. It was hard to know if there was burn damage on the smooth rim top because of the lava but after cleaning it we would know for sure. The rusticated finish was pretty dirty with dust and grime when we got it but still showed promise. The acrylic stem had deep tooth marks and chatter on both sides near the button. The edges of the button were also marked. Jeff took the following photos of the pipe before he worked his magic on them.

The pipe must have been a terrific smoker because the bowl was so heavily caked with the thick lava flowing over the rim top. In its condition it was going to take some work to clean out that bowl and be able to see what the rim looked like underneath the layer of lava. The acrylic/Lucite stem was in good condition other than the deep tooth marks and chatter on both sides of the stem just ahead of the button and on the button surface itself. 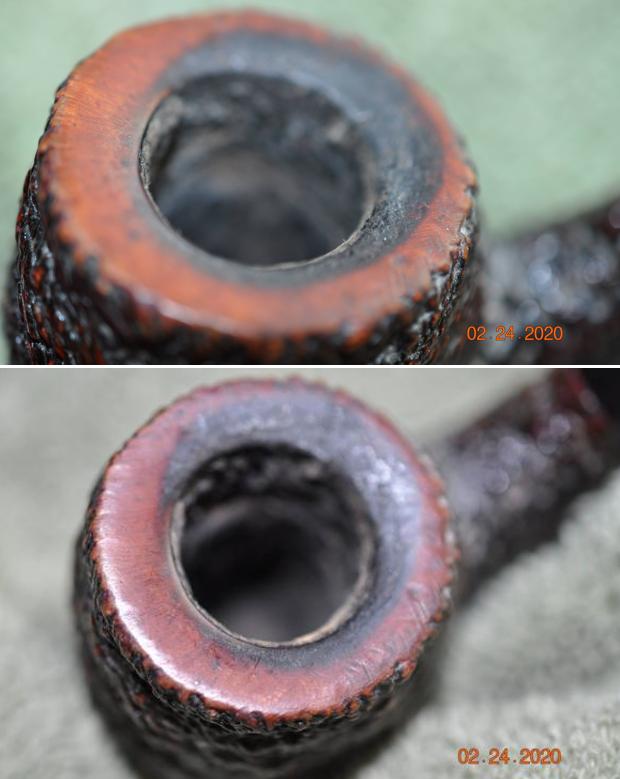 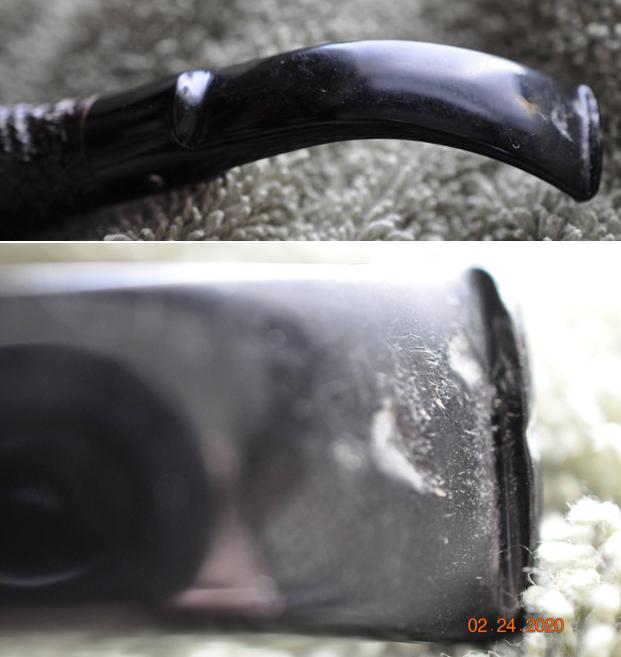 The rest of the bowl looked dirty but the photos give an idea of what Jeff saw before his cleanup revealed the condition of the pipe. 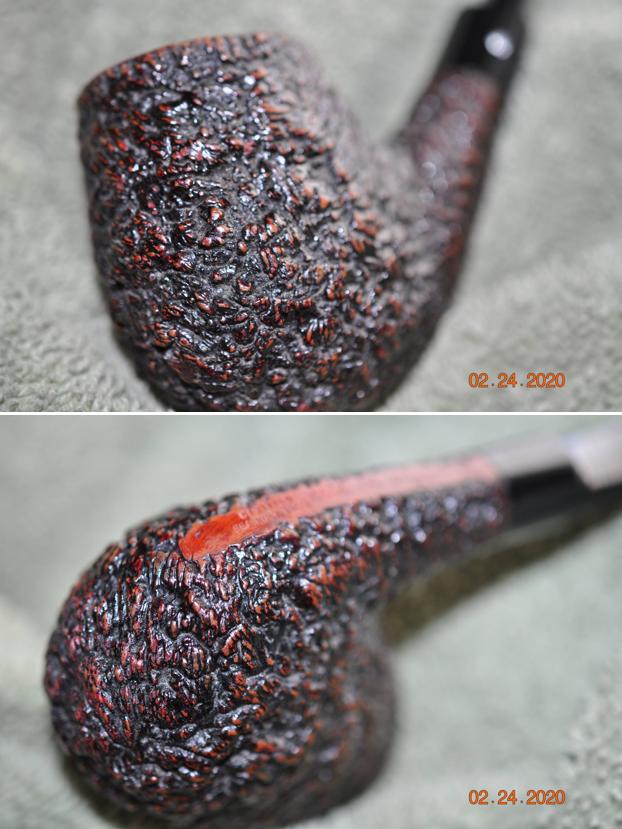 The next photos try to capture the stamping on the flat panel on the underside of the shank. It read as I have noted above. The stem also bears a Hand Made Castello stamp on the underside. 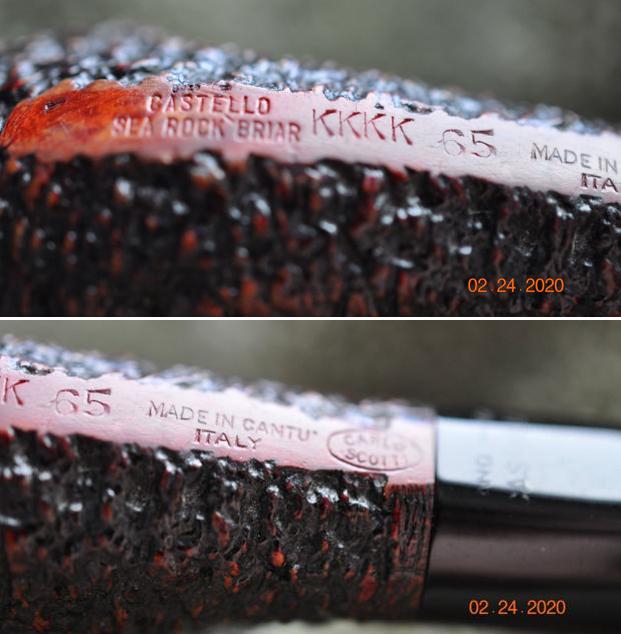 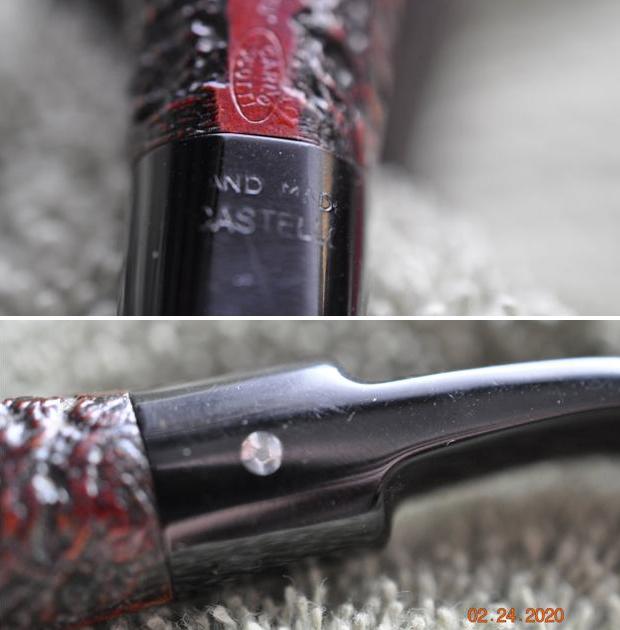 Jeff cleaned the pipe with his usual regime that many who read this probably have memorized. He reamed the bowl with a PipNet pipe reamer and cleaned up the remnants with a Savinelli Fitsall Pipe Knife. He scrubbed the internals of the bowl, shank and stem with alcohol, cotton swabs and pipe cleaners. He scrubbed the exterior with Murphy’s Oil Soap to clean off the dust and grime on the rusticated Sea Rock finish. The smooth rim top looked very good under the thick lava coat. The inside of the bowl itself looked great. He scrubbed the stem with Soft Scrub cleanser to remove the grime and grit. The stem was in great shape other than the tooth marks on both sides. It really is a beautiful looking rusticated pipe. I took photos of the pipe when it arrived here. 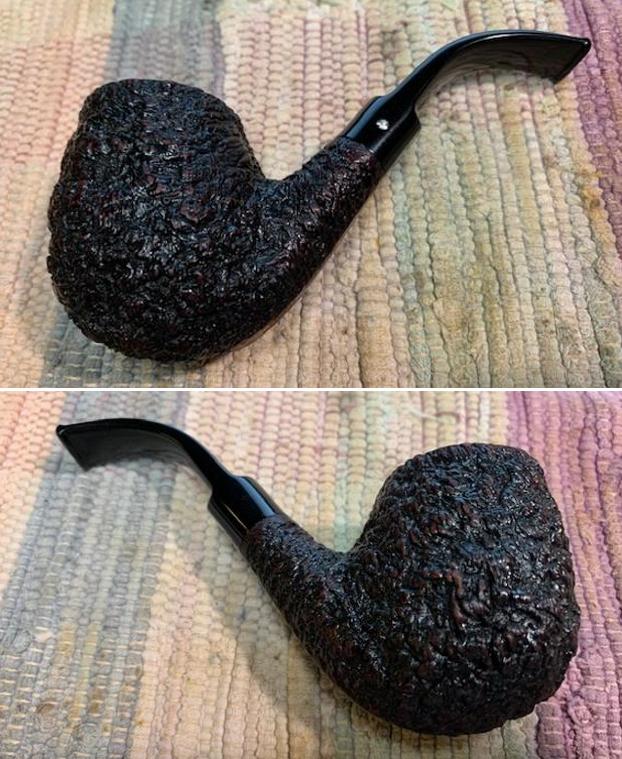 I took some close up photos of the rim top, bowl and stem to show what they looked like after Jeff’s cleanup. It is a startling difference. The rim top looks very good. The stem also looks very good.

I took a photo of the stamping on the underside of the shank and the stem. It is clear and readable as noted above.

I removed the stem from the shank and took a photo of the pipe to show the proportions of the bowl/shank and the stem length. 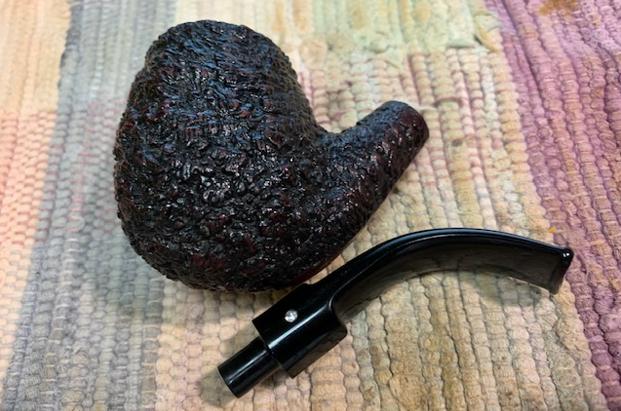 I cannot seem to retain the details on Castello pipes in my head for long for some reason. The stamping on them – Castello and the Carlo Scotti stamp were things that I wanted to makes sure I understand before I began to work on the pipe. I turned to Pipephil’s site to get a quick summary (http://www.pipephil.eu/logos/en/logo-castello.html). I quote:

The site also gave a good summary of the grading and sizes of the pipes. I quote that in full.

I also found a note on the page that the Rhinestone logo was originally on pipes for the US market. It is occasionally used now.

I turned then to Pipedia for more information on the brand (https://pipedia.org/wiki/Castello). The majority of the information was what was already quoted above in abbreviated form. However there was a link to an article by Bob Hamlin that gave some interesting bits of information that I found helpful (http://www.pipes.org/BURST/FORMATTED/196.016.html). I quote in part from that article.

SEA ROCK [Carved Black or dark brown]:  This is the lowest grade of the Castello line and is the most common in the USA.  Sea Rocks are produced by taking a smooth bowl that has not been “final finished” and surface carving the finish with tools. This “carved” finish is then evened out using a steel wire brush, stained and then waxed. The Natural Vergin carved finish is left unstained and unwaxed as a rule, although we have seen waxed and partially waxed “Vergins”.

All carved Castello pipes are graded by the number of K’s that are stamped on each piece and are K-graded by SIZE.  1K is the smallest and fairly rare, 2K is small to medium, with 3K or 4K being the most common and ranges from medium to medium large. Large pieces are stamped “G” for giant and extra large pieces are stamped “GG” for double giant.  In addition to the number of K’s on a carved Sea Rock piece the shape number is almost always added.  As a rule a Sea Rock Castello is stained Black, although recently there have been quite a few coming in stained deep brown and still stamped “Sea Rock”.  American Logo’d Sea Rocks are all priced the same to the consumer, although most are 2 or 3 K’ed models.  G/GG models are charged at a higher price on American pieces and are basically the same as their European counterparts.

The Castello Sea Rock briar I was working on had the 4Ks of a Medium Large sized pipe. It definitely was made for the American Market with the Rhinestone in the stem. It had the black/dark brown finish. The 4K stamp told me that it came out in the late 1960s onward and was a mid-large sized pipe from that time period. The number 65 makes it a Bent Billiard.

I decided to work on the stem first and try to remove and repair the tooth marks on both sides of the acrylic stem. Since acrylic does not have “memory” like vulcanite I did not try painting the stem surface. I sanded down the chatter in preparation for repairing the tooth marks. I filled in the tooth marks with clear CA glue. Once the repairs cured I used a small file to flatten them out and recut the sharp edge of the button. To blend in the repairs I sanded the stem with 220 grit sandpaper and started the polishing with 400 grit wet dry sandpaper. 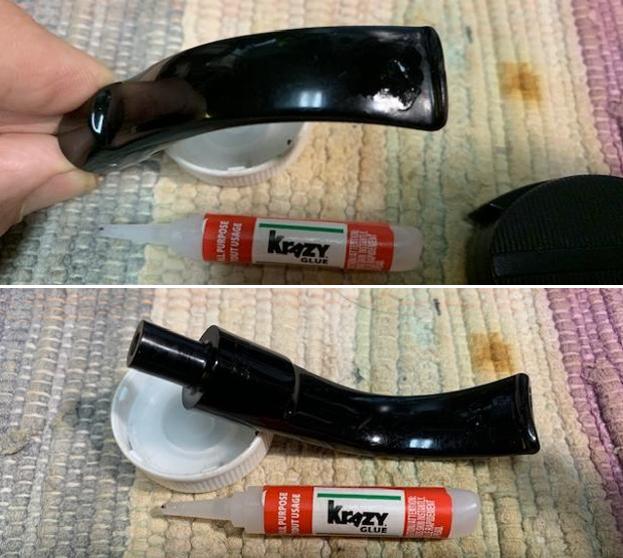 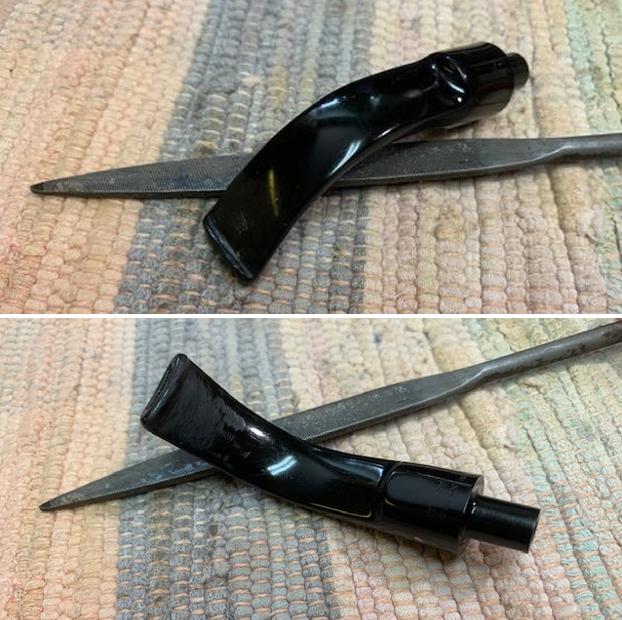 I set the stem aside and turned my attention to the bowl. I polished the smooth rim top with micromesh sanding pads -1500-12000 grit pads. I wiped the rim top down with a damp cloth between each sanding pad. The rim top began to really shine.

I worked some Before & After Restoration Balm into the rusticated Sea Rock finish on the bowl and the rim top. I worked it into the surface of the briar with my fingertips and a horsehair shoe brush to clean, enliven and protect the wood. Once the bowl was covered with the balm I let it sit for about 20 minutes and buffed it off with a soft cotton cloth and the shoe brush. I polished it with a microfiber cloth. I took photos of the pipe at this point in the process to show what the bowl looked like at this point.

I put the bowl and stem back together on this beautiful Castello Sea Rock Briar KKKK 65 Bent Billiard. I polished the stem with Blue Diamond to polish out the scratches in the Lucite. I gave the bowl multiple coats of Conservator’s Wax and the stem multiple coats of carnauba wax. I buffed the pipe with a clean buffing pad to raise the shine. I hand buffed it with a microfiber cloth to deepen the shine. The pipe polished up pretty nicely. The contrast of the blacks and dark browns of the briar with the polished black acrylic/Lucite is quite stunning. The dark, coral like rustication around the bowl and shank is quite remarkable and gives the pipe an incredible tactile presence that only improves as it heated from a smoke. The finished pipe is shown in the photos below. The dimensions of the pipe are Length: 5 inches, Height: 2 ¼ inches, Outside diameter of the bowl: 1 ½ inches, Chamber diameter: ¾ of an inch. The pipe weighs 67grams/2.36oz. This is a beauty that will be staying with me as it ticks off all the boxes of a Castello that I have been watching out for. Thanks for walking through the restoration with me. I always enjoy working on Castello pipes. Cheers. 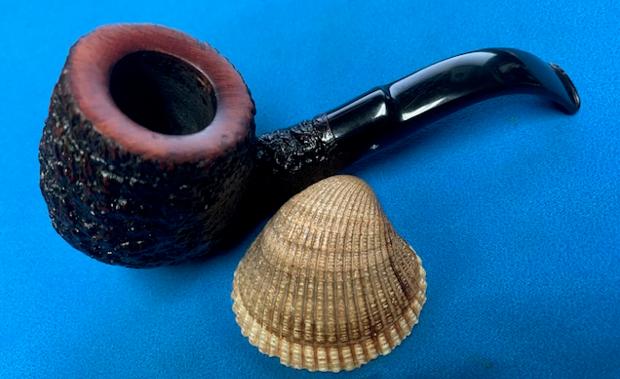 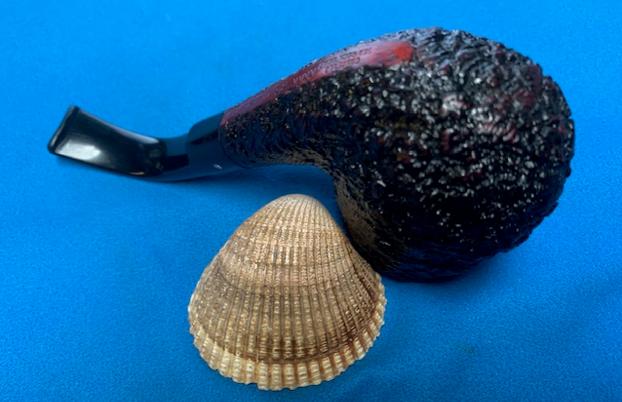 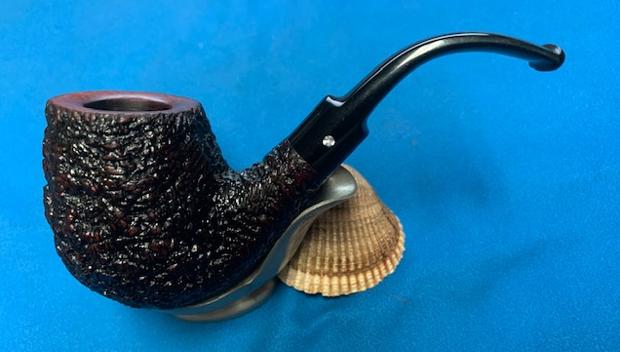 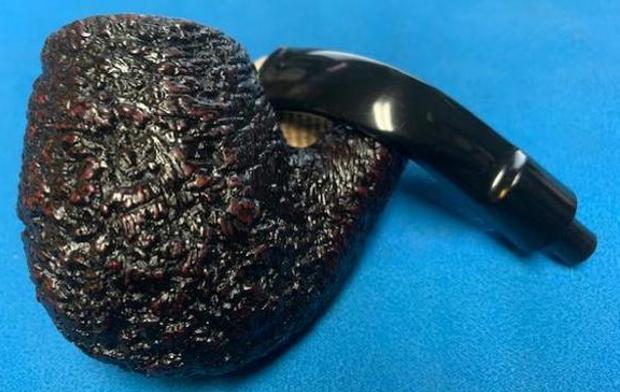 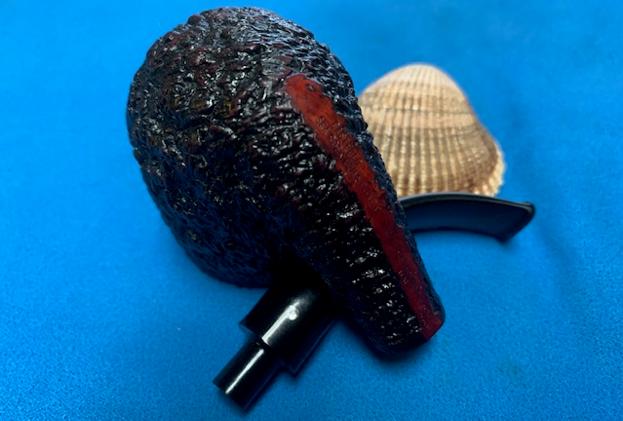 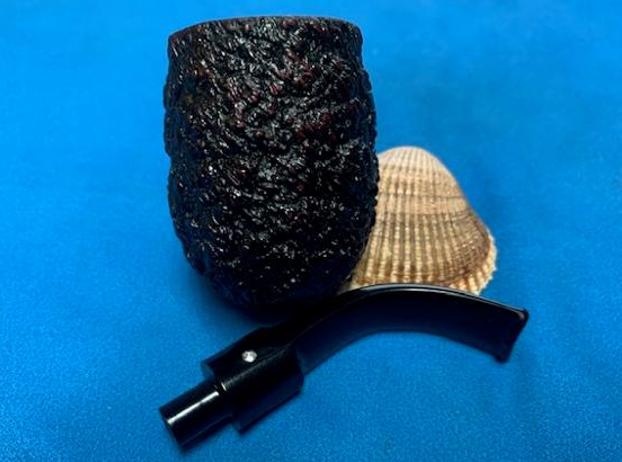