The next pipe I have chosen came to us I a group of pipe that we purchased from a fellow in Los Angeles, USA. It was stamped on the left side of the shank and read Peterson’s [over] “Dunmore”. On the right side it is stamped Made in the Republic of Ireland and the shape number which looks to be 999 over-stamped to read 998. The P-lip stem has the gold P stamping on the left side of the saddle.  It was filthy when Jeff brought it to the table to clean. The finish was dirty with grime ground into the briar sides and rim. There was debris in the twin rings around the cap and there was a chip out of the right side between the rings. There was a thick cake in the bowl and an overflow of lava on the rim top and the inner edge of the bowl. The decorative beaded band around the shank end was dirty but in good condition. The stem was oxidized, calcified and had light tooth marks and chatter on the top and underside on and near the button. Jeff took photos of the pipe before his cleanup work. They tell the story and give a glimpse of the promise that we see in this pipe.

Jeff took photos of the rim top and stem to show the general condition of the pipe. The bowl is heavily caked with a lava overflow on the rim top. You can see the grime on the outside of the bowl. The stem is oxidized, calcified and has tooth marks on the top and underside near the button. 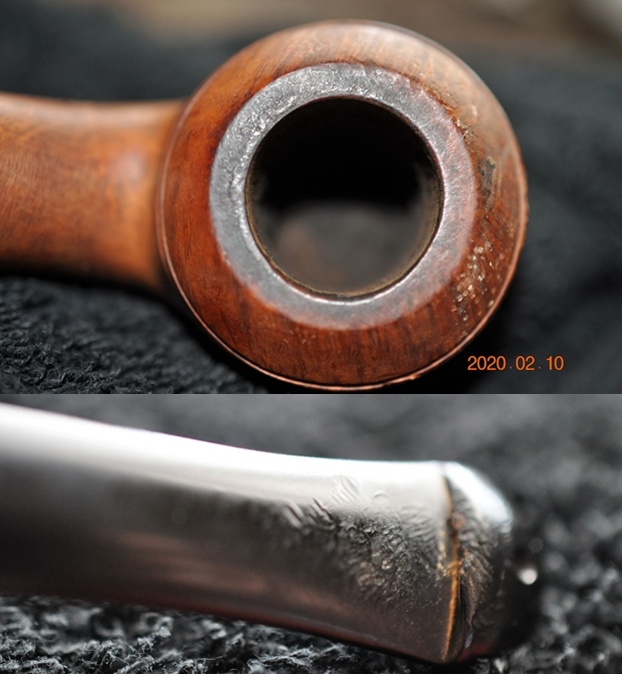 Jeff took some photos of the bowl sides and heel to show grain that was around this bowl. It is a nice looking pipe. Notice the chips out of the middle of the twin rings are different points of the bowl in the photos below. 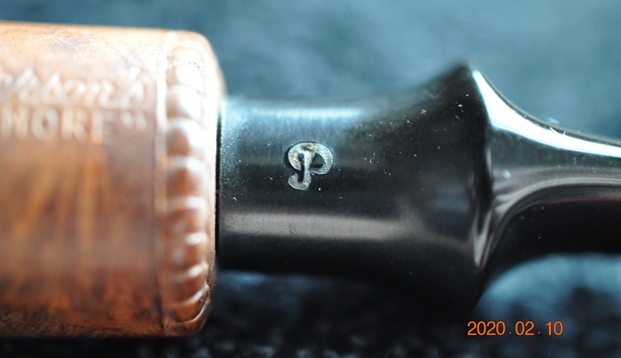 1950 – 1989 The Republic Era – From 1950 to the present time, the stamp for this era is “Made in the Republic of Ireland” in a block format generally in three lines but two lines have been used with or without Republic being abbreviated.

During the 1950’s and 60’s the Kapp & Peterson Company was still in the ownership of the Kapp family. However 1964 saw the retiral of the company Managing Director Frederick Henry(Harry) Kapp.

Around 1977, as seen in the Associated Imports Distributor’s Catalog illustrations above, the John Bull 999 became the XL999, and Peterson introduced shape 998, a stream-lined version of the 999 The two shapes ran alongside one another for several years, which happens when shapes are in transition. The XL999 / 999 Large John Bull was still in the 1987 catalog, but by the 1992 Handmade Brochure it had morphed into the slimmer 998 shape, which number was henceforth deleted from the catalog. I might add it was still called the “John Bull,” and Pete Nuts worthy of the name should educate all comers that while others may call the shape a bent Rhodesian, we know better.

I then turned to the book I should have consulted first, The Peterson Pipe, by Mark Irwin and Gary Malmberg to garner some background on the “Dunmore” line. On page 298 there is an entry for Dunmore pipes. It reads as follows:

Dunmore (1971-c.1984 2006-10). Appeared first as Iwan Ries & Co. exclusive line “Dunmoor,” a Premier-grade in light-brown smooth or rustic red in all System shapes, with beading at the shank. Documented in the Associated Imports Catalog from 1973. Classic Range Dunmore shapes from ’78. A third Dunmore line (’06-10) featured standard and some B shapes, with beading around bowl instead of at shank-face, produced for European market.

On page 268 there is a shape chart that does comparison of the shapes in the various lines. There I found the following information:

On page 165 there were also photos of pages from a catalogue with the description: The unmounted Dunmore Premier debuted in both System and Classic Range shapes circa 1973 with a final appearance in the 1981 catalogue.

The information blurb on each page read: “Dunmore Briars.” Beautifully grained best quality briar in light-brown, matt or rustic finish. Often described as “Petersons Unmounted System” has all the advantages of the system range. Ten models each fitted with the Peterson Lip mouthpiece.

With that information in hand I knew what I was dealing with in terms of the stamping on the pipe. It is a Late Republic era pipe. It showed up in Peterson Catalogue in 1973 and from what I have learned about the Dunmore, this date fits well. Now it was time to work on the pipe. 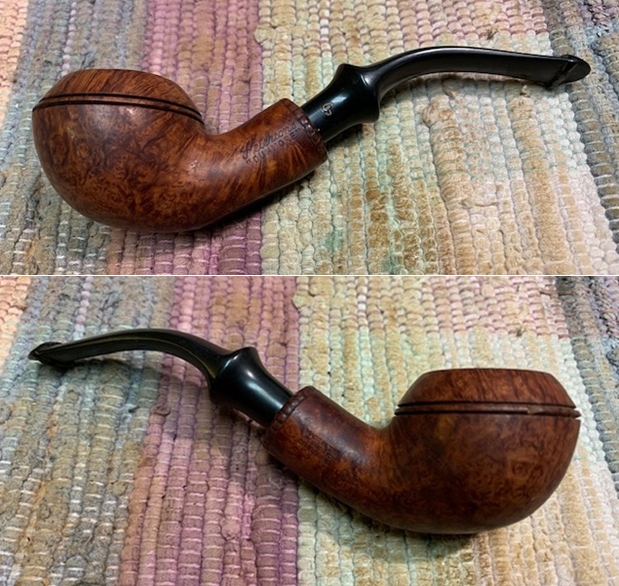 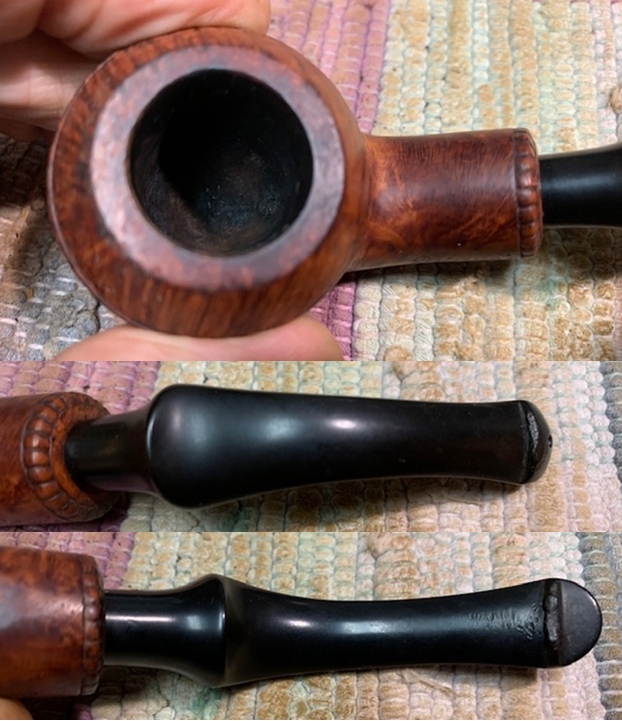 I took photos of the stamping on the sides of the shank. You can see that it is stamped as noted above. It is clear and readable.

I took the pipe apart and took a photo of the pipe. It is a good looking pipe and has some great grain around the bowl and shank. 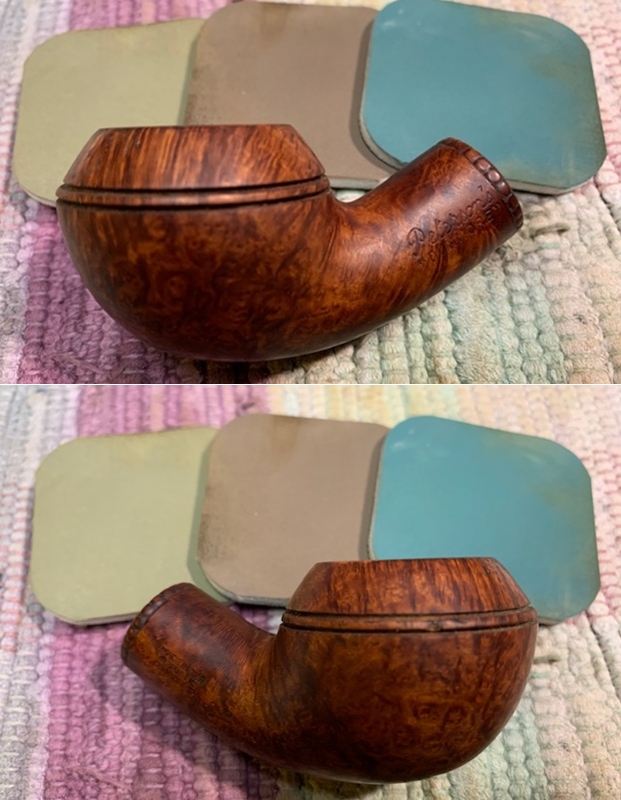 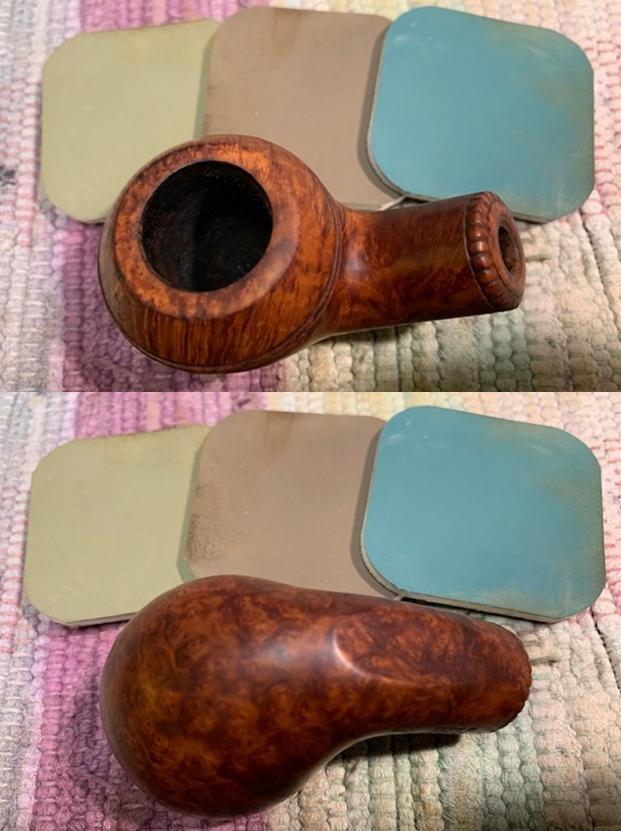 I worked some Before & After Restoration Balm into the surface of the briar with my fingertips and a horsehair shoe brush to clean, enliven and protect the briar. I let the balm sit for 15 minutes and then buffed with a cotton cloth to raise the shine. The grain really pops.

I sanded out the tooth marks on the top and underside of the stem with 220 grit sandpaper. I worked over the area ahead of the button and on the button edges as well. I started the polishing process with 400 grit wet dry sandpaper.

I am excited to finish this Republic Era Peterson’s “Dunmore” 998 Rhodesian. Al Jones’ contribution to the shape number helped to cinch this one for me. It is definitely more petite than the 999 pipes that I have worked on. I put the pipe back together and buffed it with Blue Diamond on the buffing wheel. I gave the bowl and the stem multiple coats of carnauba wax. I hand buffed the pipe with a clean buffing pad to raise the shine. It is fun to see what the polished bowl looks like with the grain popping through on the bowls sides and rim top. The polished black vulcanite stem was beautiful. This Republic Era Rhodesian is a nice looking and the pipe feels great in my hand. It is light and well balanced. Have a look at it with the photos below. The dimensions are Length: 6 inches, Height: 1 ½ inches, Outside diameter of the bowl: 1 ½ inches, Chamber diameter: ¾ of an inch. The weight of the pipe is 42grams/1.48oz. It is a beautiful pipe and one that will be on the Irish Pipe Makers section of the rebornpipes store soon. If you are interested in adding it to your collection let me know. Thanks for walking through the restoration with me as I worked over this pipe. Thanks to each of you who are reading this blog. 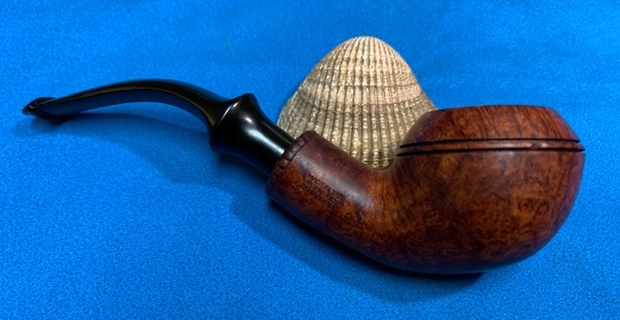 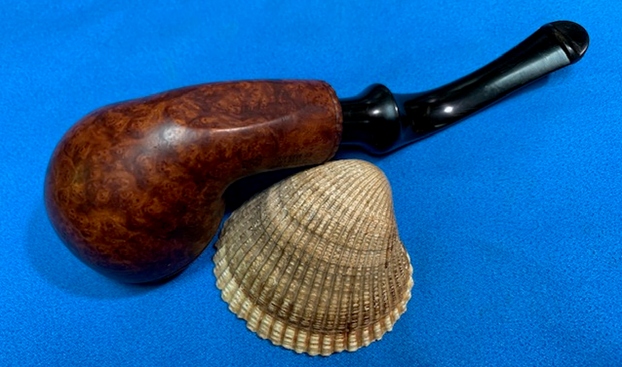 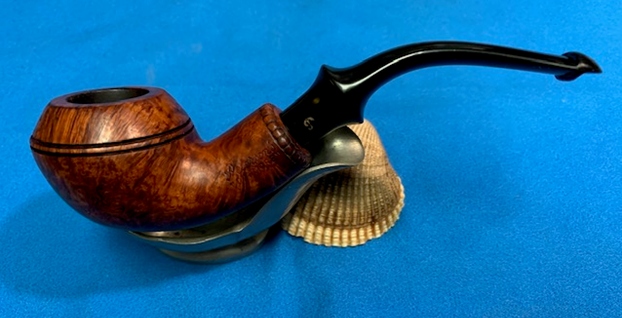 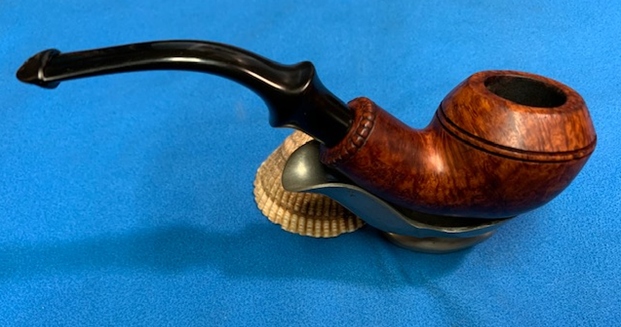 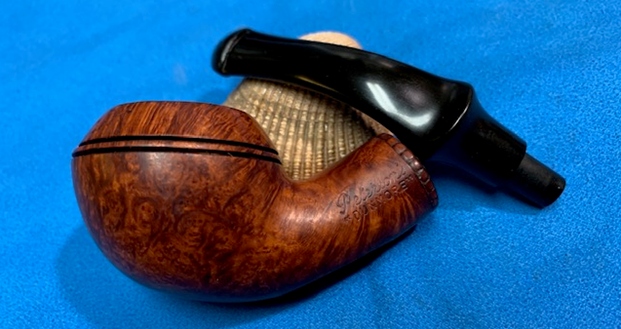 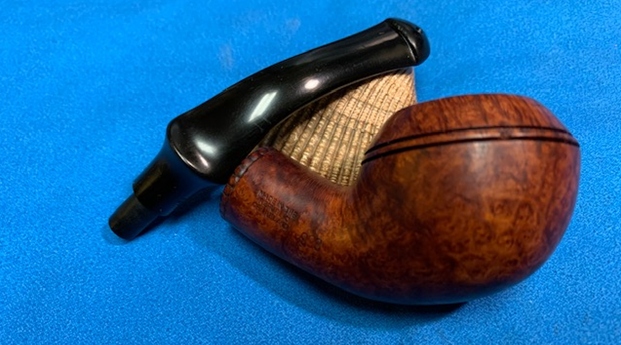 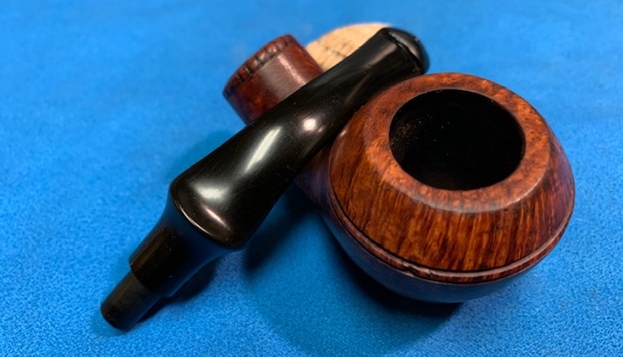 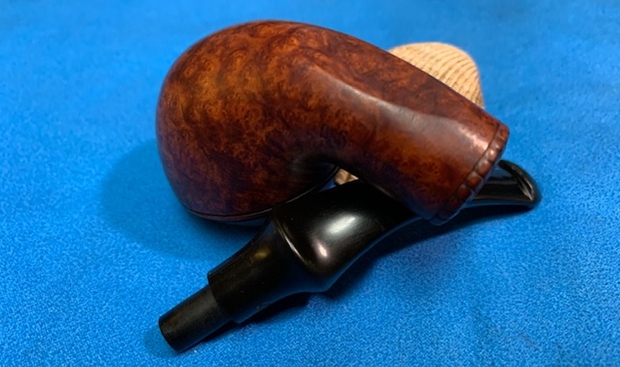