Jeff and I picked up this pipe from a contact in Florida. It is a smooth finished Sasieni Billiard with a unique shape and smooth finish. It has a Fantail stem that is unique to the Sasieni Fantail line. It is stamped on the left side of the shank and the stamping reads Sasieni [over] Fantail. On the right side of the shank it is stamped London Made and the shape number 62. The stamping around the shank end near the stem reads PATD-170067. The pipe is very dirty with grime ground into the finish of the bowl. The bowl was thickly caked with an overflowing lava coat on the top of the rim. The edges looked to be in good condition though I would not know for sure until the bowl and rim had been reamed and cleaned. The stem was oxidized, dirty and had light tooth chatter and marks on the top and underside near the button. The stem had an “F” stamped on the left side of the fantail stem. The fit of the stem in the shank was tight and clean. The pipe had promise under all of the grime and dirt. Jeff took some photos of the pipe before he started the cleanup work. 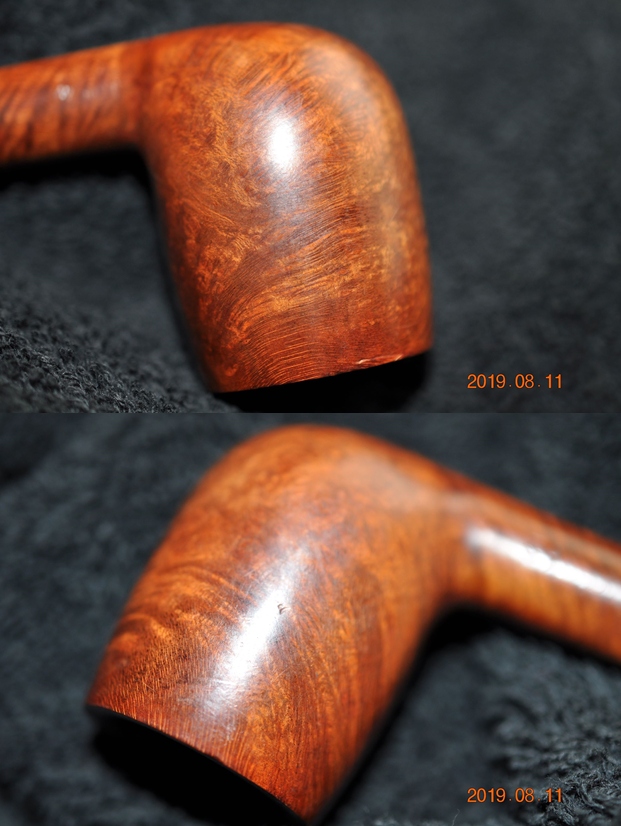 He took photos of the stamping on the sides of the shank. It reads as noted above and is clear and readable. He also took a photo of the “F” on the left side of the stem.

I have included a screen capture of the pertinent section of the Sasieni section of PipePhil’s Logos and Stamping website and included the link should you want to look at on the site. (http://www.pipephil.eu/logos/en/logo-sasieni2.html). The second pipe in the photo below shows a pipe with the same stamping as the one that I am working on. It reads Sasieni Fantail, London Made, PAT D -170067. The difference is the location of the Patent stamp. On the one that I am working on is around the shank end.

I turned to Pipedia and found a patent diagram for the Fishtail stem that Doug Valitchka posted (https://pipedia.org/wiki/Sasieni). I have included that document below. It was filed in 1953 and received the patent July 21, 1953. Which helps to date this pipe as post patent.

That helps to cinch the dating of this pipe as Family Era pipe made somewhere between 1946–1979. The change of “Sasieni” script without the fish-tail initiated by Alfred Sasieni occurred after Second World War. This puts the date of the pipe between 1946 and 1979 – a large spread.

Jeff had cleaned up the pipe with his usual penchant for thoroughness. He reamed the pipe with a PipNet Pipe Reamaer and cleaned up the remnants with a Savinelli Fitsall Pipe Knife.  He scrubbed the bowl with undiluted Murphy’s Oil Soap with a tooth brush. He rinsed it under running warm water to remove the soap and grime. He cleaned out the inside of the shank and the airway in the stem with alcohol, cotton swabs and pipe cleaners. He soaked the stem in Before & After Deoxidizer and rinsed it off with warm water. I took photos of the pipe once I received it.

The bowl and the inwardly beveled rim top cleaned up really well with the lava coat removed. The inner edge of the rim was in good condition. The stem surface had some light oxidation and some light tooth marks and chatter on both sides near the button.

I took photos of the stamping are clear and read the same as noted above.

I took the stem off the pipe and took a photo of the pipe as a whole. You can get a clear picture of the pipe from the photo below.

Now it was time to do my work on the pipe. I polished the bowl and rim top with micromesh sanding pads using 1500-12000 grit sanding pads and wiping it down after each sanding pad with a damp cloth to remove the sanding dust and debris.

I rubbed the bowl and shank down with Before & After Restoration Balm. I worked it into the surface of the bowl sides and shank with my fingertips to clean, enliven and protect the briar. I let the balm sit for a little while and then buffed with a cotton cloth to raise the shine and brings the grain alive. It is a nice looking pipe.

I set the bowl aside and turned to work on the stem. I I used a folded piece of 220 grit sandpaper to sand out the tooth marks and chatter on the stem surface. I started the polishing with 400 grit wet dry sandpaper.

I used a tooth pick and Liquid Paper to touch up the “F” stamp on the left side of the Fantail stem. The “F” stamp was not deep but it is visible. 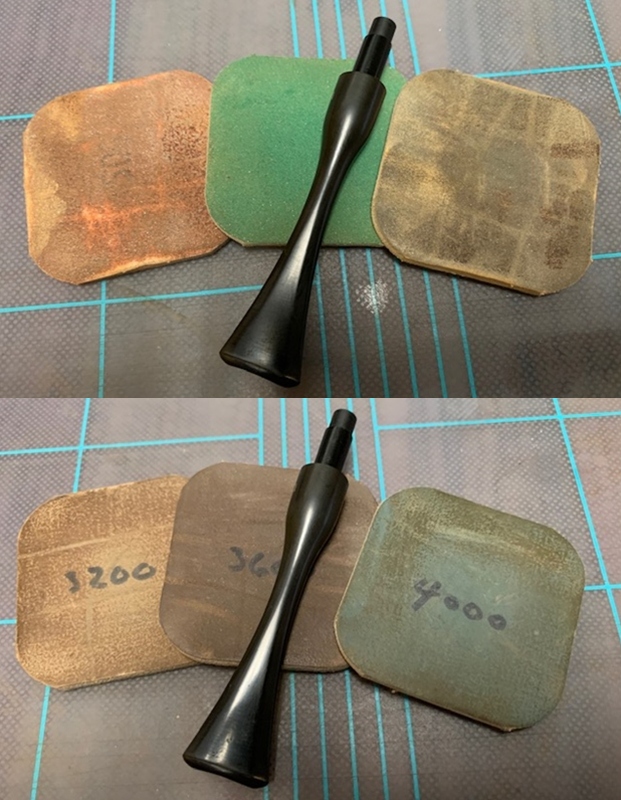 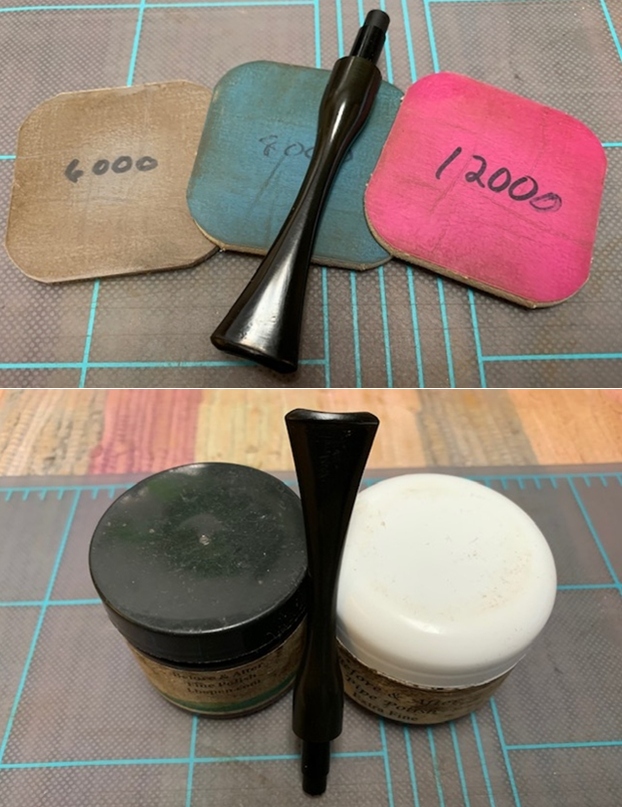 This Sasieni Fantail 62 Billiard is a beautiful looking pipe. I put the stem back in place in the shank and buffed the bowl and stem lightly with Blue Diamond on the buffing wheel. I gave the bowl and stem multiple coats of carnauba wax on the buffing wheel. I buffed the pipe and stem with a clean buffing pad to raise the shine. I hand buffed the bowl with a microfibre cloth to deepen the shine. The finished pipe is shown in the photos below. The dimensions of the pipe are Length: 6 inches, Height: 1 ¾ inches, Outer diameter of the bowl: 1 ¼ inches, Chamber diameter: ¾ inches. The contrast of the dark brown and a medium brown that shines through give the finish a rich patina. The Sasieni Fantail London Made 62 Billiard has some amazing grain around the bowl sides and shank. The bowl has been cleaned and the entire pipe is ready to smoke. The stem is in great shape with a few small nicks in the surface of the top and underside. It is a beautiful pipe, just a little big for my liking or I would hang on to it. I will be putting it on the rebornpipes store soon. If you are interested in adding it to your collection email me at slaug@uniserve.com or send me a message on Facebook. Thanks for looking. 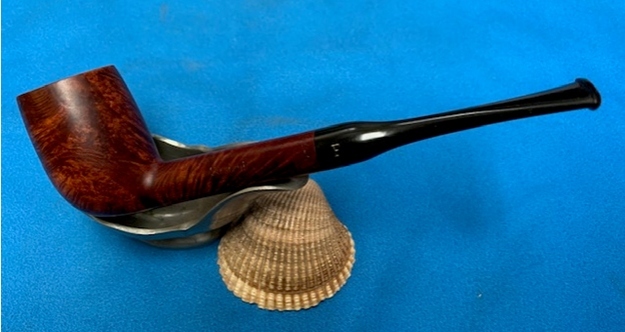 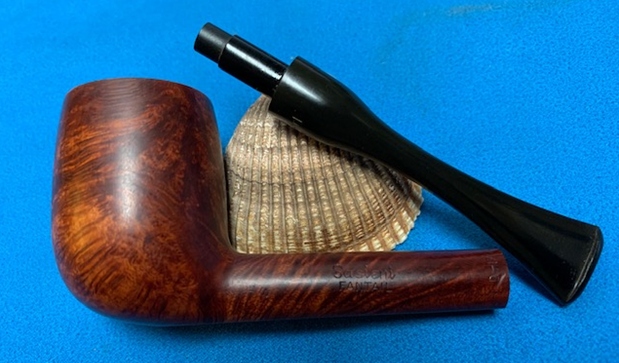 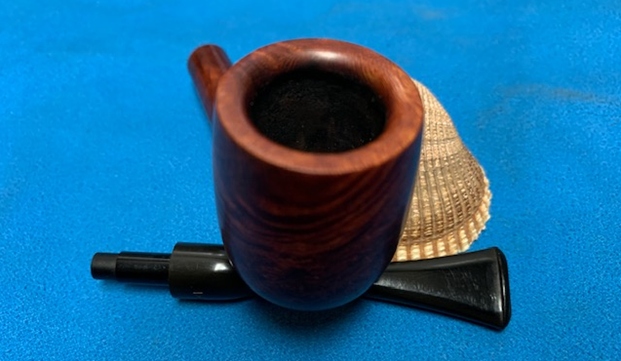