The next pipe on the worktable is an interestingly shaped pipe made by Pipe-Dan. It is a backward canted stack, tall and thin shank with a short lumberman style round vulcanite stem. The finish is an interesting mix of sandblast and rusticated. The bowl sides are horizontally rusticated and then sandblast over the top of the rustication. It gives the pipe a very unique finish. The rim top of the bowl bears the same combination of sandblast and rustication. The pipe is stained with black and various hues of brown. It truly is a beautiful finish. The pipe is stamped with a 28 on the heel of the bowl followed by 251. Next to that it is stamped DAN followed by Shape-Reformed. At the shank end it is stamped Pipe-Dan Copenhagen. The finish was very dirty and worn looking with a lot of grime and oils ground into the valleys and crevices of the blast. There was a thick cake in the bowl overflowing in lava filling in the rim top. The tapered vulcanite stem is heavily oxidized and had calcification over much carries on the twist of the shank. The stem looked very good. It is dirty with light tooth chatter on both sides near the button. Jeff took some photos of the pipe before he started his cleanup work.

He took photos of the bowl and rim top to show their general condition. You can see the thick cake in the bowl. The cake and lava are so thick that it is not clear what the inner edge of the bowl looks like at this point. The lava also fills in the grooves and crevices in the finish of the rim top making it almost smooth. 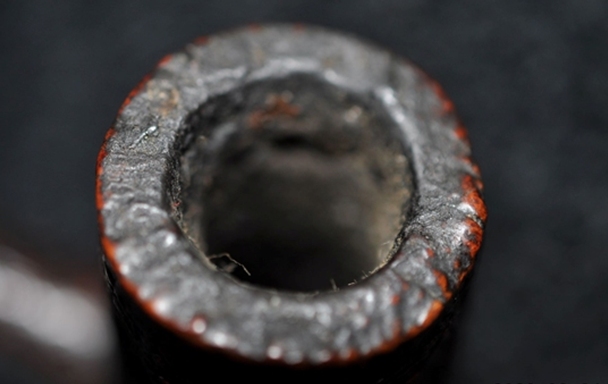 Jeff took some photos of the sides and heel of the bowl to give an idea of the unique finish that mixes sandblast and rustication giving the tall bowl a very tactile finish. You can also see the debris in the rustication around the bowl and rim. I cannot wait to see what it looks like once it is cleaned and polished. 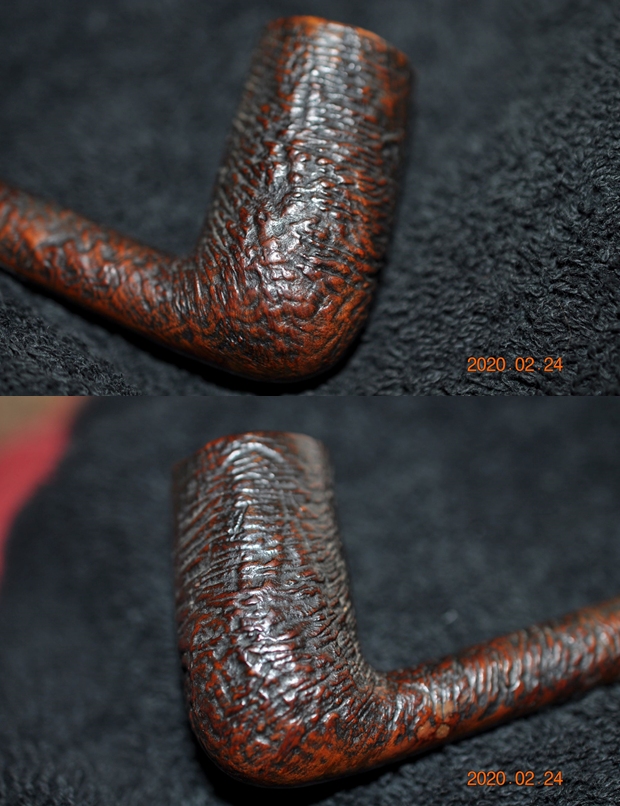 He took several photos of the stamping on the underside of the shank to capture it for me. It is clear and readable. It runs from the heel to the stem. It is 28 261 Dan Reformed-Shape followed by Pipe Dan Copenhagen.

The vulcanite stem is a mess! It is heavily oxidized and there is calcification all over the stem from the button forward. There are also tooth marks and chatter on the stem on both sides. The button appears to be in good condition. The photos below show the condition of the stem. 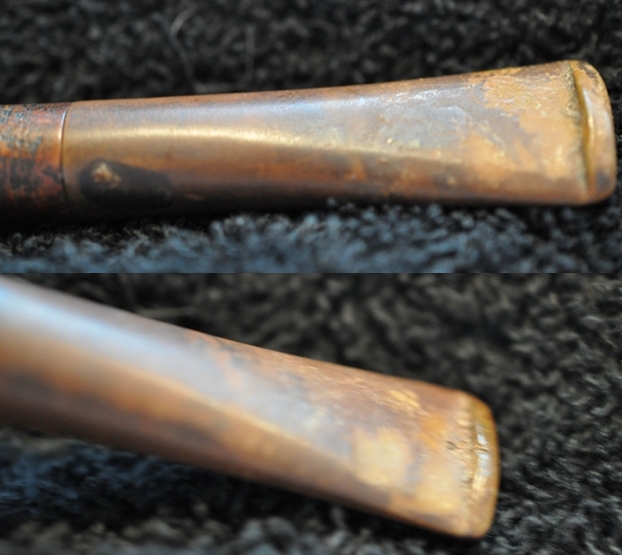 Before I started working on my part of the restoration I decided to do some research on the brand to see what I could learn. I turned first to PipePhil’s site to get a quick overview of the brand (http://www.pipephil.eu/logos/en/logo-p3.html). There found the following information. I am also including a screen capture of the pertinent section from the site.

Brand created in 1943. The shop (Danish name: Pibe-Dan) which closed in 1991 was run by H. Dan Christensen. He sometimes designed pipes but he is merely renowned for having helped young artisans like Tom Eltang, Preben Holm, Jes Phillip Vigen, Hans Hartmann…

Pipe-Dan let the pipe maker stamp his own name on a pipe along with the shop’s name.

There was one line on the page that stood out to me because it applied specifically to the pipe on the table today. I quote:

The line name “Shape-Reformed” means that a traditional shape had been redesigned.

I turned then to Pipedia to get more history and background to the brand and potentially more information on the pipe (https://pipedia.org/wiki/Pibe-Dan). I quote the article in full as well I have included a photo from the site showing the storefront.

The House of Pibe-Dan was founded in Copenhagen in May, 1943, and was named for H. Dan-Christensen, nicknamed Pibe-Dan. Pibe-Dan (Pipe-Dan) unfortunately closed in 1991, but during the 48 years it was in business it was the ultimate place to find pipes by Danish masters.

Pibe-Dan would often let the pipemaker stamp his own name along with the company name… Pibe-Dan published its first catalog in the late 1950’s and, as was the case with W.O. Larsen, published it in English given their international customer base. While they sold pipes by Stanwell, Kriswill, Brakner and others, the classic pipe sold from Pibe-Dan was the Dan Shape-Reformed Pipe, which had a very tall vertical bowl, and were hand made of Corsican briar. Pibe-Dan claimed that the design was longer, drier, cooler and more even smoking. The Shape-Reformed was available in various lines including the Danois, Standard, Champion, Half Chimney and others.

At the same time, Pibe-Dan had a long history of also including pipes by Danish artisans in their catalog. Sixten Ivarsson’s Peewit, Oliphant, Ukulele and other shapes first appeared in Pibe-Dan’s catalog, and other artists who either began with or sold through Pibe-Dan include, among many others, Hans Hartmann, Gert Holbek, Sven Knudsen, Tom Eltang, Arne Nygaard, P. Holtorp, Poul Hansen, and Ph. Vigen, among others. The legendary Preben Holm sold pipes to the Pibe-Dan shop before his sixteenth birthday in 1963, and soon after was selling twenty to thirty pipes a week to the company, with Pibe-Dan setting the prices. This relationship continued until 1968.

From that information I learned that the line name “Shape-Reformed” means that a traditional shape had been redesigned. This shape was the classic pipe sold by the company. They described the pipe as having a very tall vertical bowl and hand made from Corsica briar. They claimed that the design was longer, drier, cooler and more even smoking. The Shape-Reformed was available in various lines.

Now I had a pretty good idea of how the pipe was stamped and made. With that information I moved forward to work on the pipe itself and see what I had to do with it. The bowl looked unbelievably good in light of where it started. The stem looked much better with just a few tooth marks on each side of the stem just ahead of the button. He had done his normal thorough clean up – reaming, scrubbing, soaking and the result was evident in the pipe when I unpacked it. I took photos of the pipe before I started my work on it. The shape and finish on this pipe is very unique.

Just a word of explanation… I was excited to get started on this one so I did a repair on the tooth marks on the stem. I put a spot of superglue on both sides to fill the damaged areas. Then I recalled I did not take any  before photos. I went back and took the ones that follow! 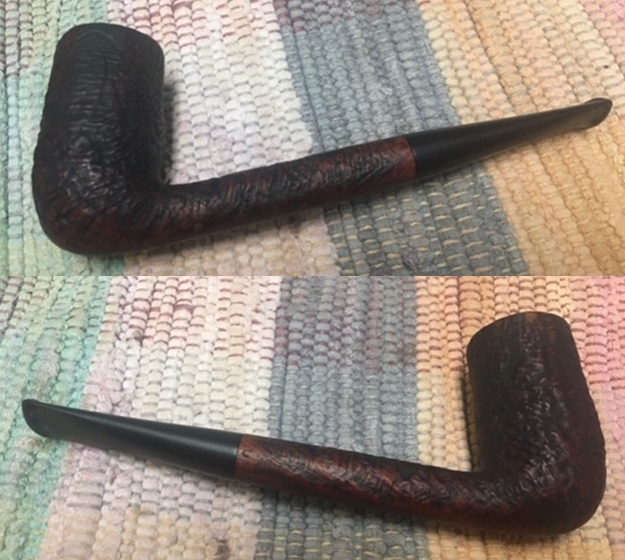 I took some photos of the rim top and stem. The rim top and bowl looked very good. He was able to clean up the thick lava as well as the cake in the bowl. The bowl and rim top look very good at this point. The close up photos of the stem shows that is it very clean. Remember my disclaimer above that I already filled in the deep tooth marks on the stem surface. 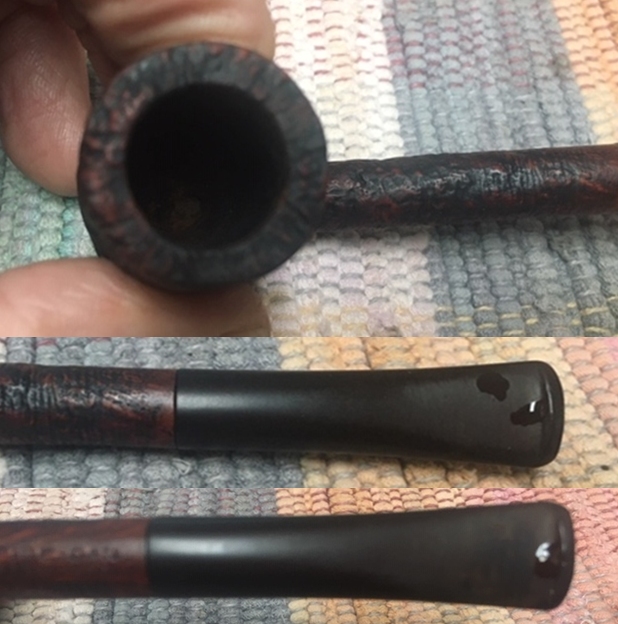 I removed the stem from the shank and took a photo of the pipe at this point. You can clearly see the condition, size and shape of the pipe. 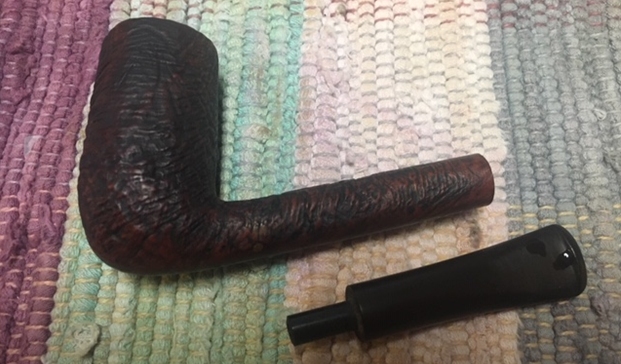 I worked some Before & After Restoration Balm into the surface of the briar with my fingertips. The product works to clean, enliven and protect the briar. I let the balm sit for about ten minutes and then buffed with a cotton cloth to raise the shine. The photos show the bowl at this point in the restoration process. 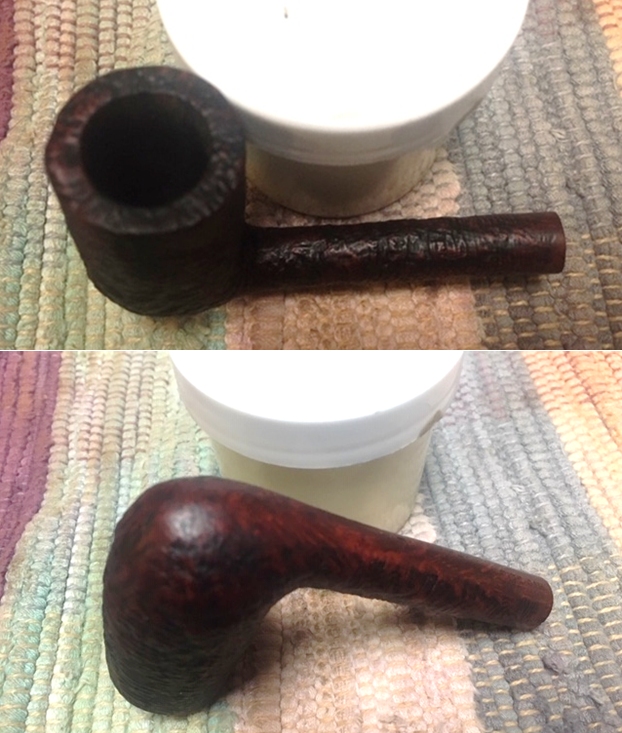 I had taken photos of the stem earlier when I had filled in the deep nicks/tooth marks on the top and underside in my rush to get started. Here are some close up photos to show the repaired areas.

When the repairs had cured I sanded the stem with a folded piece of 220 grit sandpaper to blend them into the surface of the stem and started polishing with 400 grit wet dry sandpaper.

I polished the stem with some Denicare Mouthpiece polish – a red gritty paste that feels a lot like Tripoli. It works well to polish out some of the scratches. I find that it does a great job preparing the stem for polishing with micromesh sanding pads.

I polished the stem with micromesh sanding pads – dry sanding with 1500-12000 grit sanding pads. I wiped it down after each sanding pad with a cloth containing some Obsidian Oil. I finished polishing it with Before & After Pipe Stem Polish – both Fine and Extra Fine and buffed it off with a cotton cloth. I wiped the stem down with a coat of Briarville’s No Oxy Oil to protect the rubber and slow down oxidation. 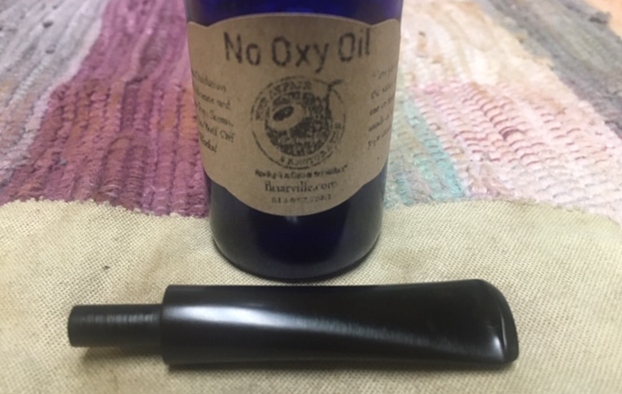 Putting this pipe back together was rewarding. The change in condition and appearance was remarkable. I put the stem back on the bowl and buffed the pipe lightly with Blue Diamond on the buffing wheel. I carefully avoided the stamping on the shank during the process. I gave the bowl multiple coats of Conservator’s Wax and the stem multiple coats of carnauba wax on the buffing wheel and followed that by buffing it with a clean buffing pad on the buffer. I hand buffed the pipe with a microfiber cloth to deepen the shine. The finished pipe is quite beautiful and is a uniquely shaped Danish pipe. The finish on the bowl combines various methods and stains to give it a living and tactile nature. It is very well done. Give the finished pipe a look in the photos below. I can only tell you that it is much prettier in person than the photos capture. The dimensions of the pipe are Length: 5 ¼ inches, Height: 2 inches, Outside diameter of the bowl: 1 inch, Chamber diameter: 5/8 of an inch. This interesting Dan Shape-Reformed Stack is a great looking pipe in great condition. Thanks for walking through the restoration with me as I worked over another beautiful pipe. I will be adding it to the rebornpipes store soon. If you want to add it to your collection send me an email or a message! Thanks for your time. 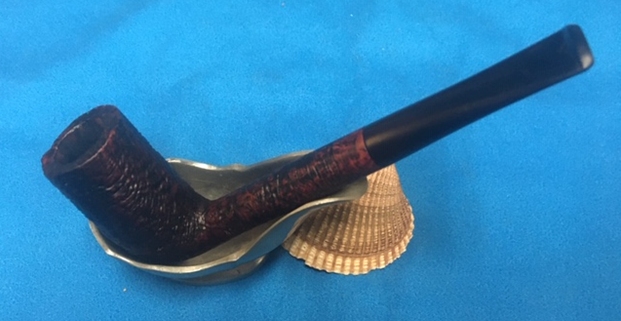 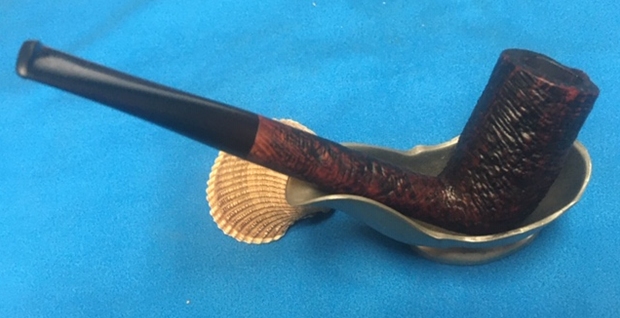 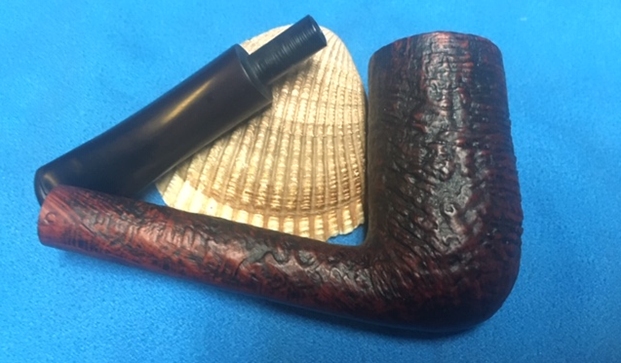 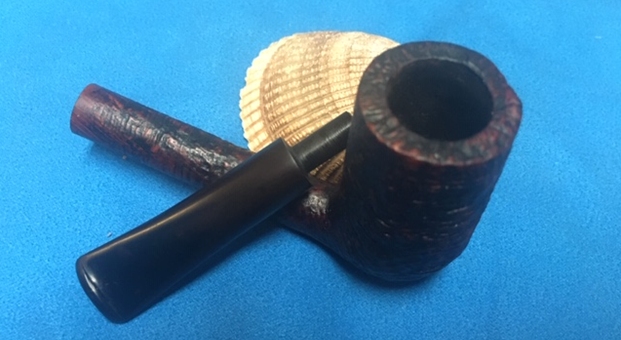 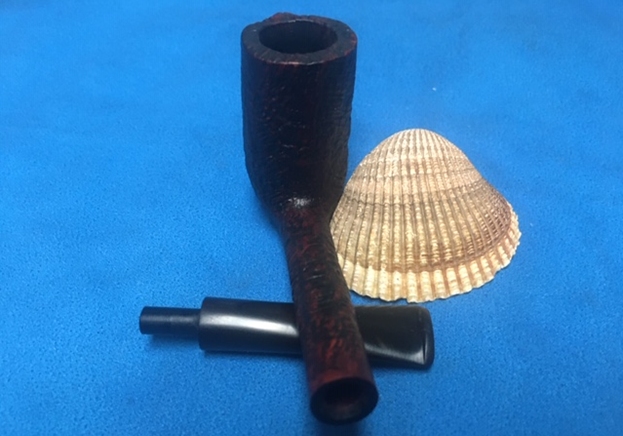