The next pipe on the work table is a pipe that came to me from Joe in Georgia. He was selling an estate for a family and sent me a list that had a Bari Matador pipe listed. I had him send me some photos of the pipe so I could see what it looked like. I was initially interested in the pipe and once I saw it we struck a deal and the pipe was on its way to Jeff. Often when I buy pipes from the US I have the sellers send them to Jeff and he cleans them for me before sending them up to me for the rest of the restoration work. It was an intriguing pipe with a combination of sandblast and smooth finishes. The left side of the bowl is sandblasted and the rest of the bowl is smooth. The rim top of the bowl is a plateau finish. The stem was a fancy turned stem with a paneled taper. 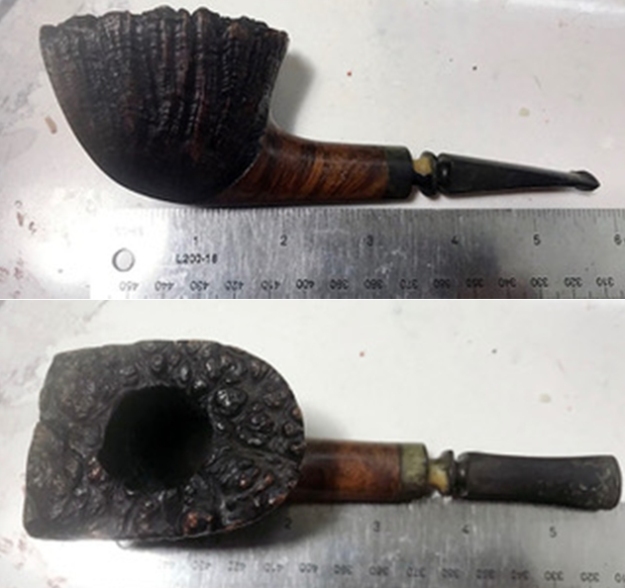 This Freehand shaped Bari is interesting in that it borders on being a panel. The front and sides are flat making the pipe rectangular while the shank is round. The panel idea follows through to the stem after the fancy turning. The blade of the stem is square. It is stamped on the left side of the shank and reads Bari over Matador in a football shape. On the right side it reads Handmade In Denmark. The finish is smooth on three sides of the pipe (right, front and back) and is sandblasted on the left side of the bowl. It has some great grain around the smooth sides of the bowl and shank. The blast is deep and rugged with some great grain as well. The rim top is plateau and is craggy. The pipe was dirty and the finish flat. There were some dings and scratches in the briar but otherwise it was in good condition. The bowl was lightly caked and the inner edge of the rim looked to be in good condition. The fancy saddle stem was vulcanite and had tooth marks and chatter on both sides near the button. It was oxidized and had some calcification on the end. Jeff took some photos of the pipe to show the general condition of the pipe before he started his clean up. 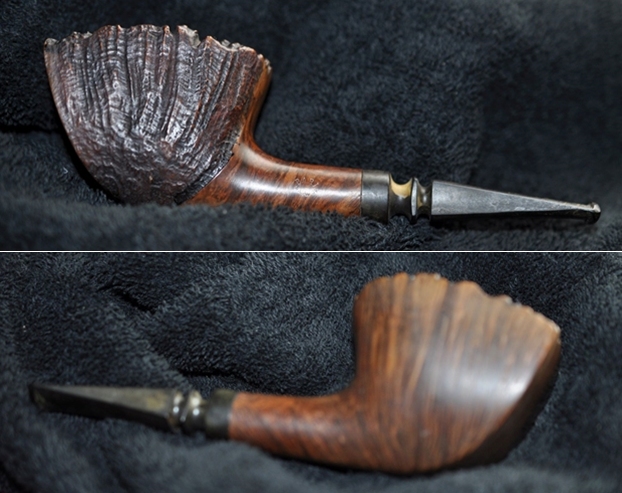 Jeff took some close-up photos of the rim top and bowl to show the overall condition. There is some light lava in some of the grooves but overall it is just dusty. The edges look very good. 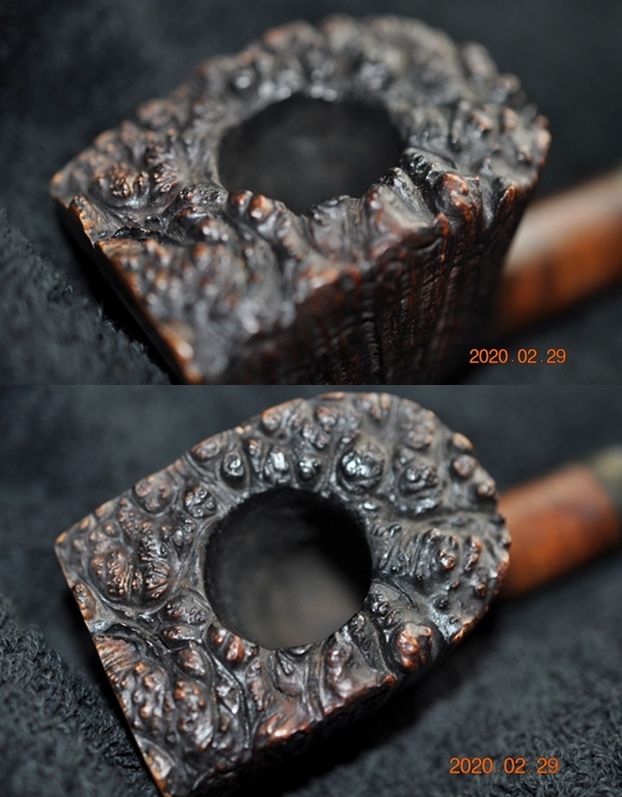 Jeff took some photos of the sides and heel of the bowl to show the condition of the finish on the pipe. The photos show the beautiful grain around the bowl. Under the dust and grime it was a nice looking bowl. I think it will be a beautiful Freehand pipe once it is restored. 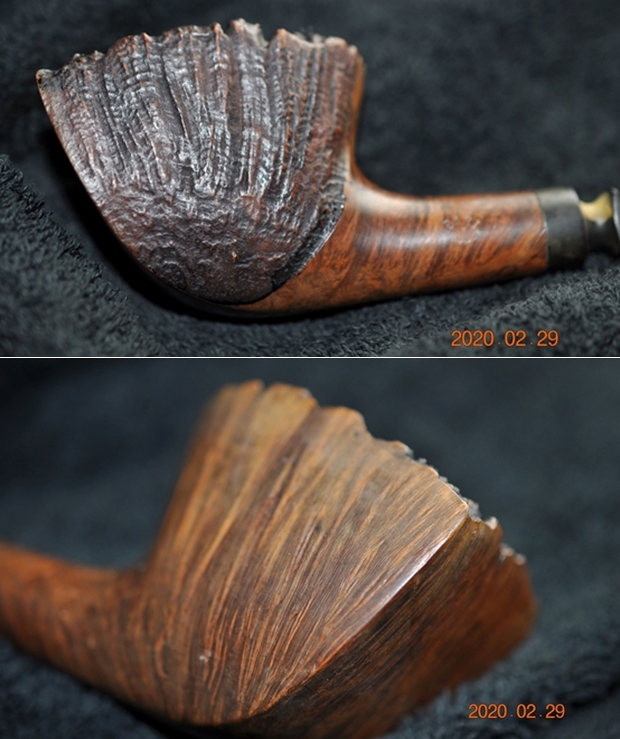 He took a photo of the stamping on the left side of the shank. On the shank it was stamped Bari over Matador in the football shape as noted above. In my examination of the pipe when it arrived I could see that it was also stamped on the right side Handmade in Denmark but it was very faint.

The next two photos show the top and underside of the stem. It is dirty and has calcification on both sides at the button. There is also some tooth chatter and some light tooth marks with some damage to the button edge. The third photo shows the fancy turning on the shank end of the stem.

Paresh has restored a similar Bari Matador and written about it on a blog. It is an informative piece so I have included the link to it here (https://rebornpipes.com/2019/05/15/a-simple-refurbishing-of-a-bari-matador/).

I also have worked on quite a few Bari’s in the past and did the work on the brand information so rather than rework all of that I am including the information I found while working on a Bari De Luxe Freehand. I quoted a section from Pipedia on Bari pipes (https://pipedia.org/wiki/Bari). I am including the material that I found previously on the brand. It is good to be reminded of the fact that Viggo Nielsen was the pipe maker. I quote:

Pipedia states that Bari Piber was founded by Viggo Nielsen in Kolding, Denmark around the turn of 1950/51. His sons Kai and Jørgen both grew into their father’s business from a very young age and worked there till 1975. Both have become successful pipe makers.

Bari successfully adapted the new Danish design that had been started mainly by Stanwell for its own models. Bari was sold in 1978 to Van Eicken Tobaccos in Hamburg, Germany though the pipes were still made in Denmark. From 1978 to 1993 Åge Bogelund and Helmer Thomsen headed Bari’s pipe production.

Helmer Thomson bought the company in 1993 re-naming it to “Bari Piber Helmer Thomsen”. The workshop moved to more convenient buildings in Vejen. Bogelund, who created very respectable freehands of his own during the time at Bari got lost somehow after 1993. Bari’s basic conception fundamentally stayed the same for decades: series pipes pre-worked by machines and carefully finished by hand – thus no spectacular highgrades but solid, reliable every day’s companions were what they turned out. The most famous series are the smooth “Classic Diamond” and the blasted “Wiking”.

Now that I was reminded about the Viggo Nielsen connection it was time to work on the pipe on my end. When I received it Jeff had once again done an amazing job cleaning the pipe. He reamed it with a PipNet pipe reamer and got rid of the cake. He cleaned up the reaming with a Savinelli Fitsall Pipe Knife so that we could see the walls of the bowl and assess for damage. He cleaned the internals of the shank and stem with alcohol, pipe cleaners and alcohol. He scrubbed the exterior with undiluted Murphy’s Oil Soap and a tooth brush. He rinsed the pipe under warm water. He dried it off with a cloth and then let it air dry. The stem was scrubbed with Soft Scrub and soaked in Before & After Deoxidizer. It came out looking very good. The finish on the bowl and the rim top cleaned up nicely. I took pictures of the pipe to show how it looked when I unpacked it.

I took a close up photo of the plateau rim top to show how clean it was. The inner edge of the rim and the ridges and valleys of the plateau looked good. The stem looked good just some light tooth chatter and several deeper tooth marks on the button.

The pipe was in decent condition so I started with the bowl. I polished the smooth portions of the briar with micromesh sanding pads – wet sanding with 1500-12000 grit pads and wiping down the briar after each sanding pad with a damp cloth. The briar began to shine. 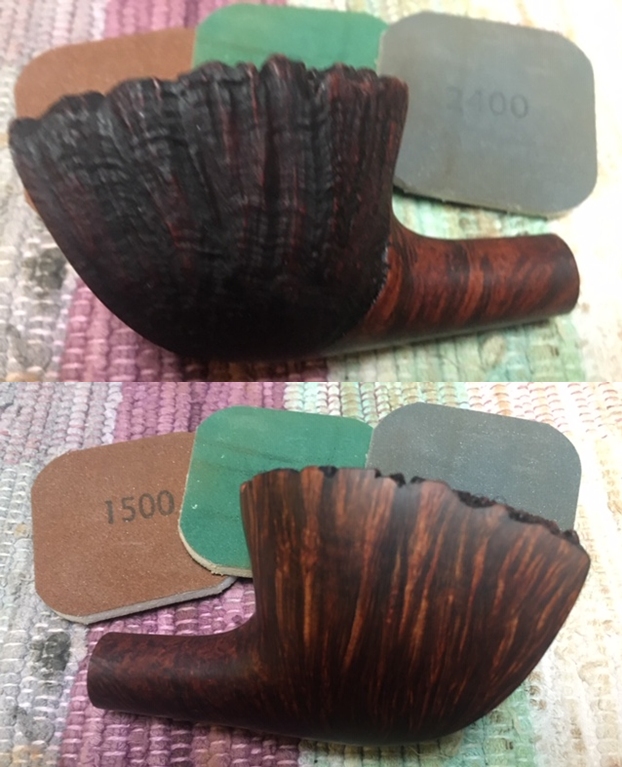 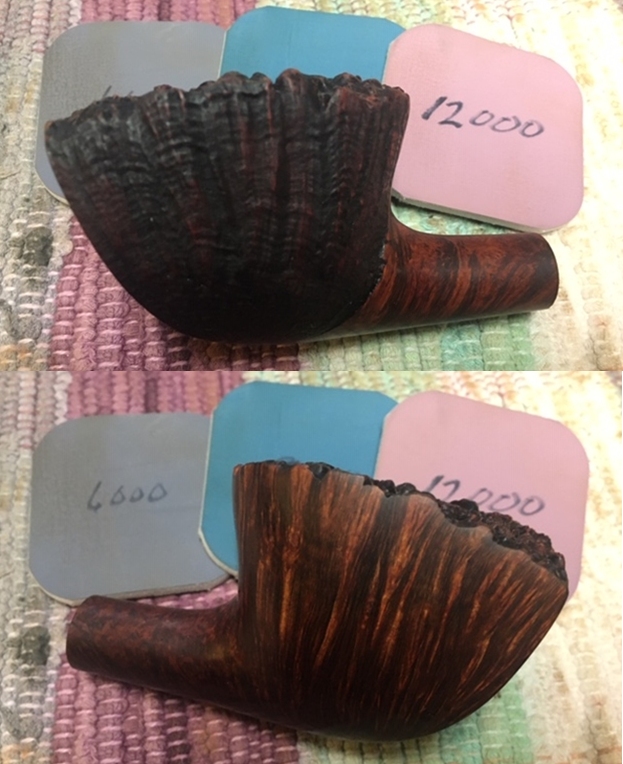 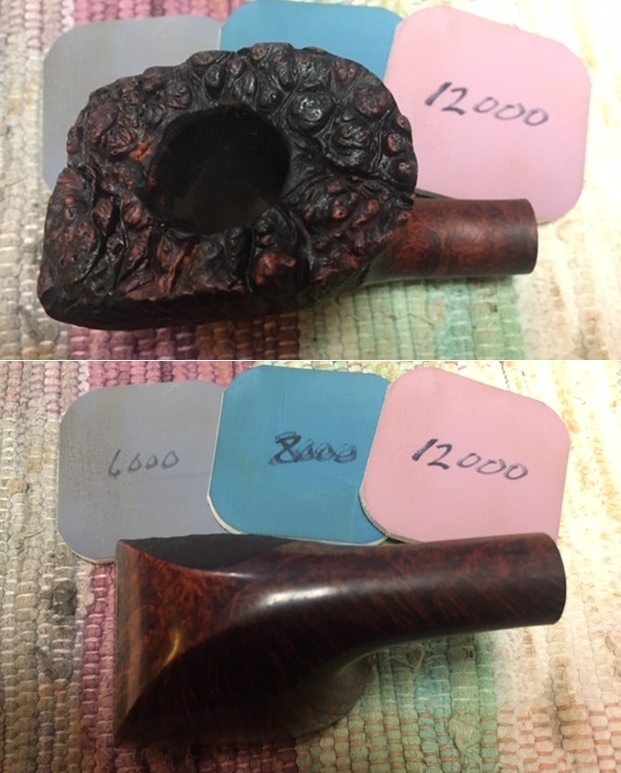 I worked some Before & After Restoration Balm into the smooth briar with my fingertips and the plateau and sandblasted side with a horsehair shoe brush. The product is a great addition to the restoration work. It enlivens, enriches and protects the briar while giving it a deep glow. I appreciate Mark Hoover’s work in developing this product. 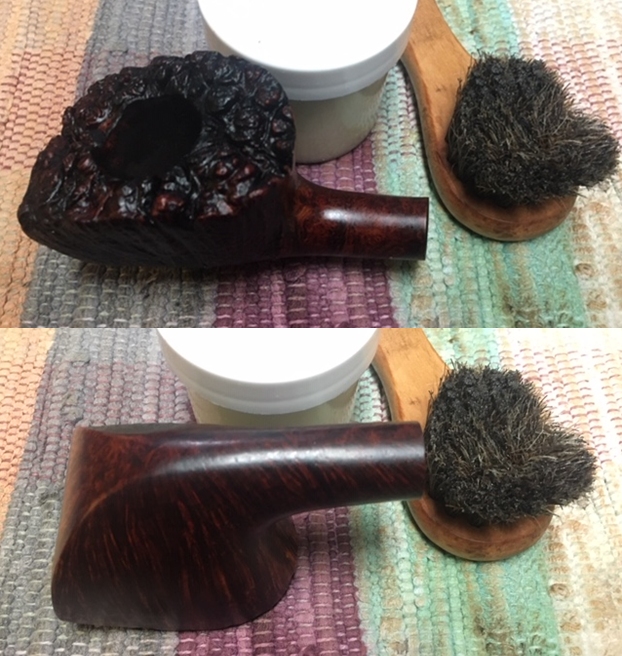 I buffed the pipe with a micro fiber cloth to raise the shine and took photos of it at this point it the process. It is a beautiful looking pipe.

I set the bowl aside and turned my attention to the stem. I “painted” the tooth marks with the flame of a Bic lighter to try and raise them a bit. Remember vulcanite has “memory” and if the marks are not sharp edge the heat well raise them. In this case while they came up some on the blade so that none remained. The damage on the button edge came up a little but it would need to be repaired. 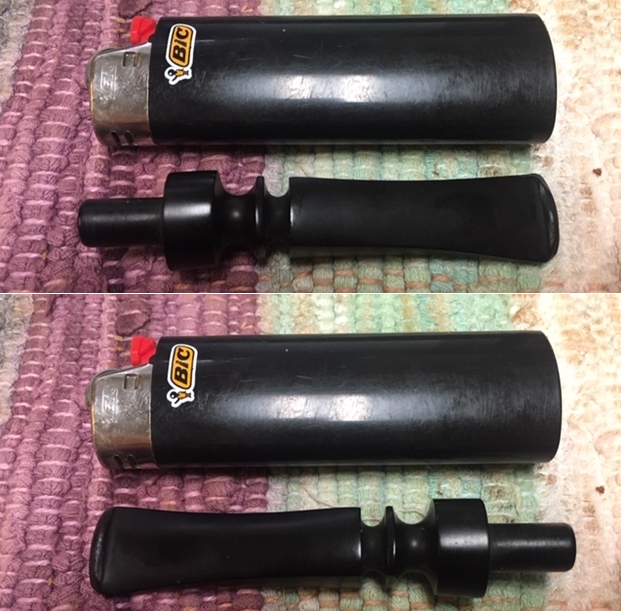 I filled in the remaining tooth marks on the button edge with clear CA glue and set the stem aside to dry.

Once the repairs cured I used a needle file to flatten them out and recut the sharp edge of the button.

I sanded the surface of the stem with 220 grit sandpaper to further blend in the repairs. I started the polishing process with 400 grit wet dry sandpaper.

I polished the stem with Denicare Mouthpiece Polish from a tin of it I have in the drawer here. It is a gritty red paste (similar in grit to red Tripoli) that I rub on with my finger tips and work it into the surface of the stem and button and buff it off with a cotton pad. It gives me a bit of a head start on the polishing work.

I am on the homestretch with this Bari Matador! As always I am excited to finish a pipe that I am working on. I put the pipe back together and buffed it with Blue Diamond on the buffing wheel. I used a gentle touch on the sandblast portion of the bowl. I gave the bowl and the stem multiple coats of carnauba wax. I buffed the pipe with a clean buffing pad and hand buffed it to raise the shine. It is fun to see what the polished bowl looks like along with the polished vulcanite stem. This Bari Matador is a nice looking pipe. It is quite comfortable in hand and should be so when smoking. It is quite light and well balanced. Have a look at it with the photos below. The dimensions are Length: 6 inches, Height: 2 inches, Outside diameter of the bowl: 2×2 1/2 inches, Chamber diameter: ¾ of an inch. It is another beautiful pipe and one that will be on the rebornpipes store soon. You can find it in the section of Pipes by Danish Pipe Makers. If you are interested in adding it to your collection let me know. Thanks for walking through the restoration with me as I worked over this pipe. Thanks to each of you who are reading this blog. 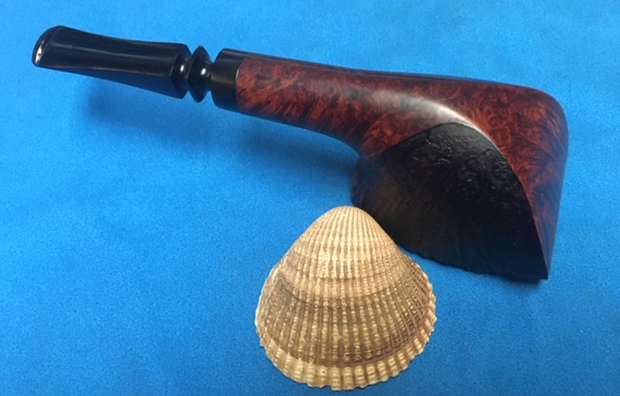 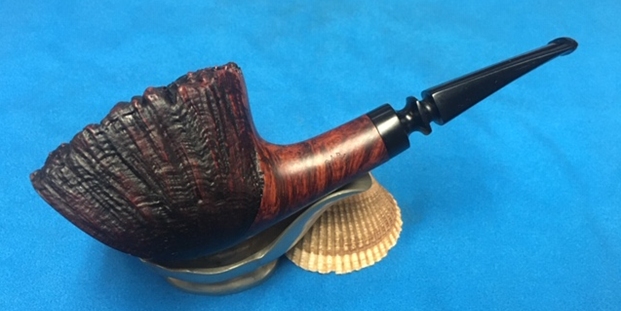 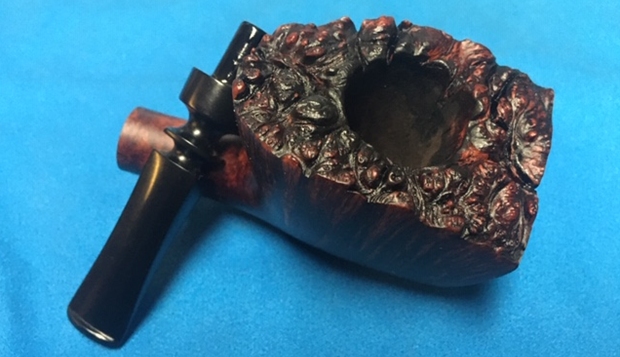 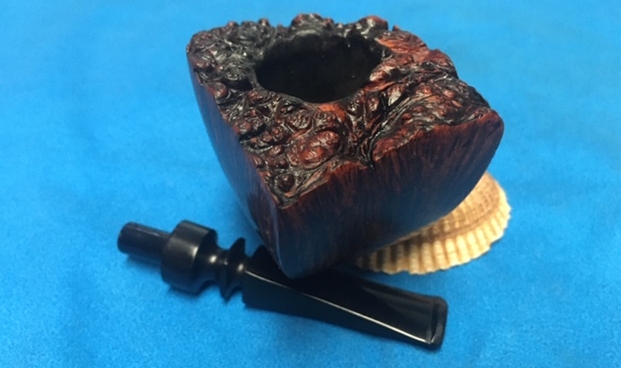 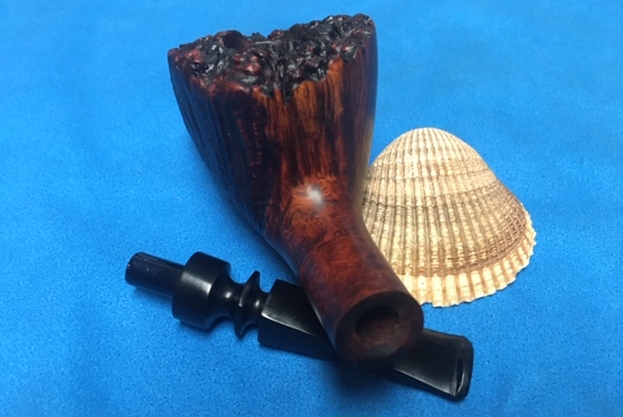 2 thoughts on “Fresh Life for a Bari Matador Freehand”