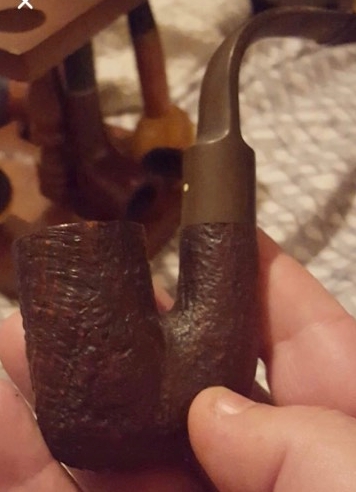 One of the benefits of the rebornpipes blog is that more and more there are individuals contacting Jeff and me with either single or multiple pipes for sale. The current pipe on the table came to us in that fashion. The pipe was being sold on an auction and a friend referred him to Jeff. He contacted Jeff about the pipe he had and sent along some photos. He had a price in mind that worked for us and soon the beautiful Dunhill Shell Briar Oom Paul on the left was on its way to Jeff. I have included the photos of the pipe that he sent us to look at. They a pretty clear picture of the condition of the pipe.

The pipe was more dusty than dirty, but the finish was in excellent condition. The Shell Briar sandblast finish was rugged, craggy and quite beautiful. The rim top was clean with no damage to the inner or outer edge of the bowl. The bowl had a light cake but was not thick and there was no lava overflow on the rim top. The stem was quite worn with tooth marks and chatter on the top and underside ahead of the button. There was some light oxidation and some calcification on the surface for the first inch of the stem.

The pipe was stamped on the underside of the shank. It read 591 F/T followed by Dunhill over Shell Briar. Next to that it was stamped Made in England with a 2 following the D in England. Finally the pipe was stamped with a Circle 4 S next to the stem/shank junction. The second photo below was included by the seller. It appeared in the photo that the stamping was not strong. We would have to see once it was in hand. What I could see was that the 591 F/T stamp was not visible but the seller said it was there. That stamp identified the pipe as an Oom Paul shape with a saddle stem. The F/T refers to a Fish Tail stem. The finish is noted by the Shell Briar and S stamp on the shank. The number 2 next to the D in England dates the pipe to 1962. The Circle 4 identifies the pipe as a Group 4 sized pipe.

Jeff took some photos of the pipe when he received it from the Michigan auction seller. He wanted to record the general condition of the pipe before he started his cleanup work. This pipe was a beauty and other than the dust and debris of years it was in very good condition. There was a thin cake in the bowl but no lava overflowing onto the rim top. The inner and outer edges of the bowl were in excellent condition. The sandblast finish was in great condition other than the dust as noted. The vulcanite stem was oxidized and has some calcification at the button. There were tooth marks and chatter on both sides of the stem at the button edge and some wear on the button edge itself. The photos below tell the story of this beautiful pipe. 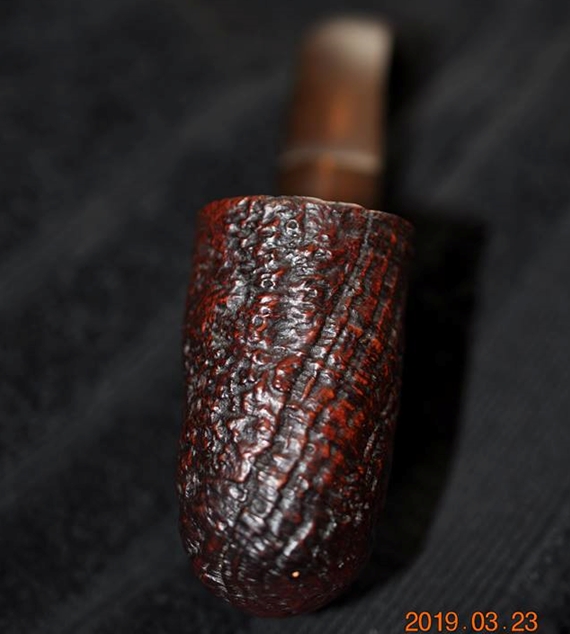 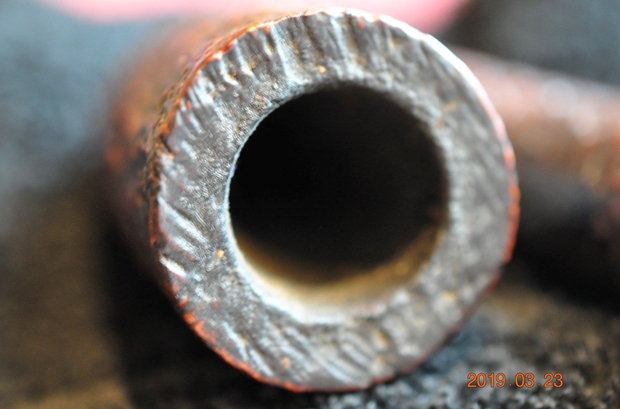 He also took photo of both sides of the bowl and shank to show the condition of the sandblast pattern on the bowl and the heel. The finish is very dirty but I like the looks of the finish on this interesting pipe. 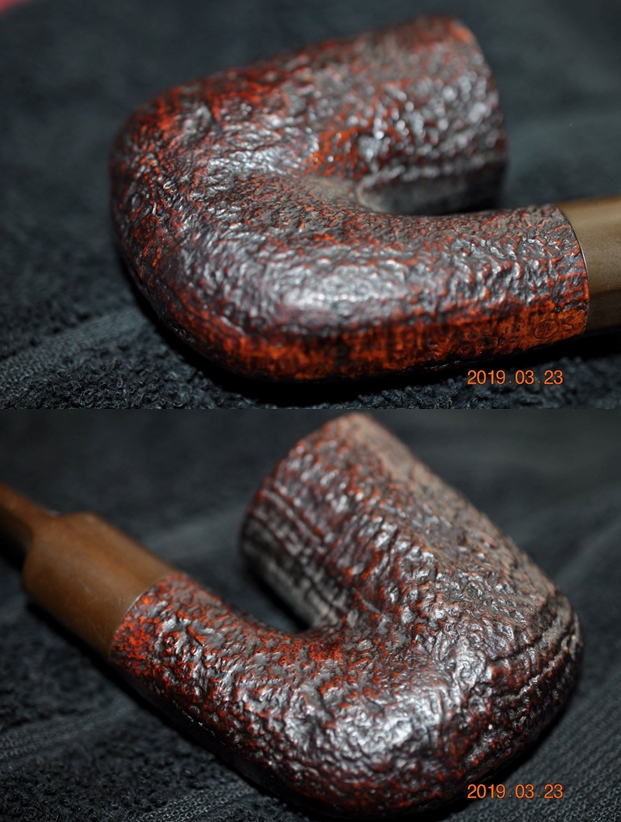 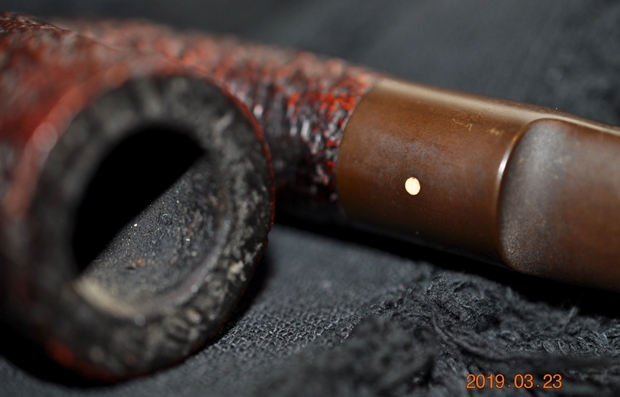 The next two photos show the stem surface. They show the oxidation, calcification, tooth marks and chatter on both sides near the button. The stem also has some damage to the top and underside of the button. 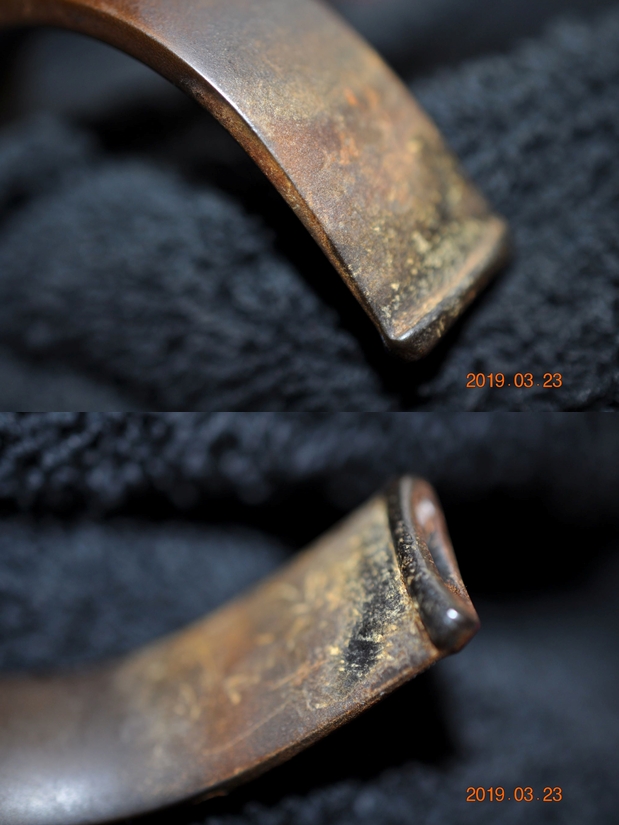 Jeff reamed the bowl with a PipNet pipe reamer and followed up with a Savinelli Fitsall pipe knife to remove the cake. He scrubbed out the mortise and the airway in the shank and the stem with alcohol, cotton swabs and pipe cleaners. He scrubbed the exterior of the bowl, rim, shank and stem with a tooth brush and Murphy’s Oil Soap to remove the oils and tars on the rim and the grime on the finish of the bowl. He rinsed it under running water. He dried it off with a soft cloth. He was able to remove the lava build up on the rim top and you could see the great condition of the bowl top and edges of the rim. He soaked the stem in Before & After Deoxidizer to remove the oxidation. I took photos of the pipe before I started my work on it. 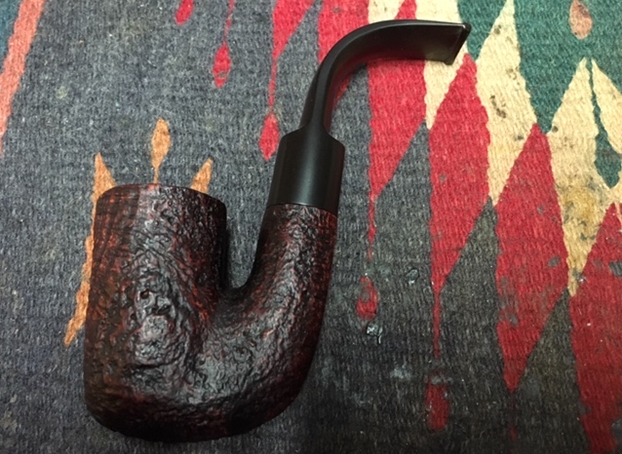 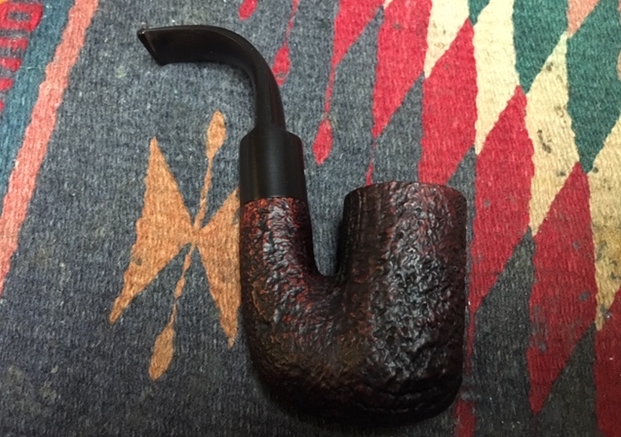 I took a close up photo of the rim top to show its condition. It was in great condition with no damage to either the inner or outer edge of the rim. The stem photos show the light chatter and tooth marks on both sides.

The bowl was in very good condition after Jeff had cleaned it up and did not require a lot of work on my part to complete the restoration. I worked some Before & After Restoration Balm into finish of the sandblast briar with my fingertips to clean, enliven and protect it. I let the balm sit for a little while and then buffed with a cotton cloth to raise the shine. The pipe really looks good at this point. I am very happy with the results. 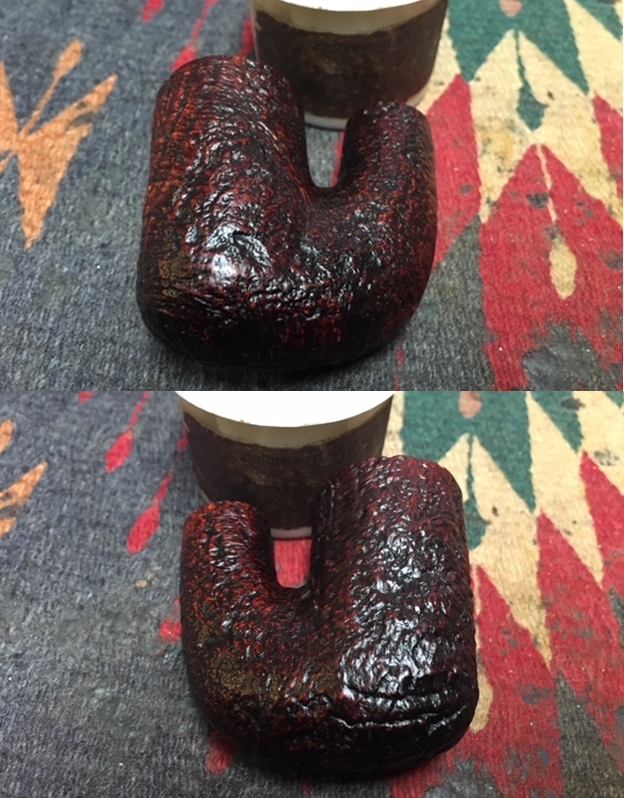 With the bowl finished I set it aside and turned my attention to the stem. I used a folded piece of 240 grit sandpaper to blend the tooth marks and chatter into the surface of the stem. Once the surface was smooth I sanded out the scratch marks and started the polishing of the stem with a folded piece of 400 grit sandpaper. I wiped the stem down with a damp cloth and took the following photos. 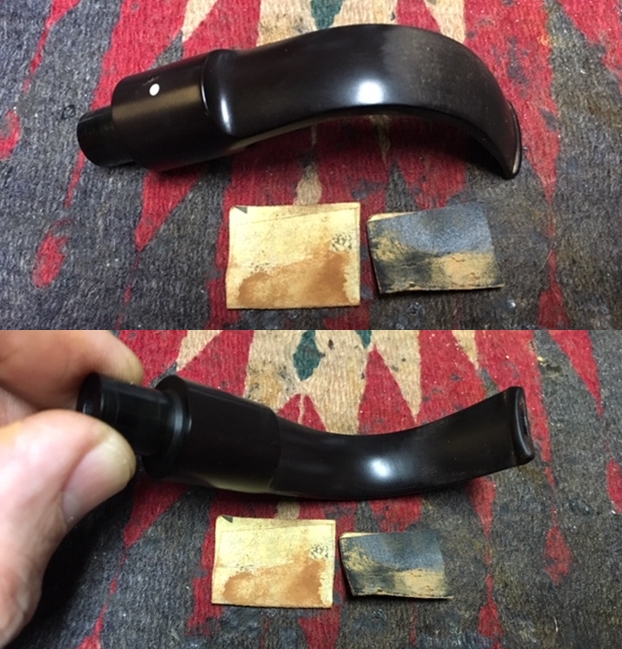 I polished the stem with micromesh sanding pads – wetsanding it with 1500-2400 grit pads and dry sanding it with 3200-12000 grit pads. I wiped the stem down with Obsidian Oil after each pad. I polished it further with Before & After Pipe Stem Polish – both Fine and Extra Fine. Once I finished with that I gave it a final coat and set it aside to dry. 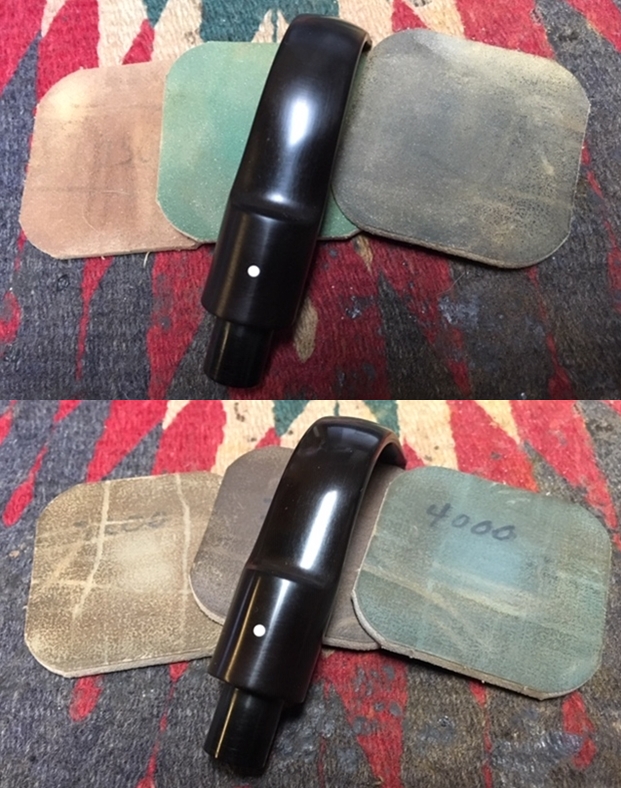 This Dunhill Shell Briar Oom Paul came alive with polishing and waxing. I buffed both the bowl and stem with Blue Diamond polish on the buffing wheel. I buffed the bowl much more lightly than I buffed the stem. The polished black vulcanite stem looked very good with the Shell Briar finish. I gave the bowl multiple coats of Conservator’s Wax and the stem multiple coats of carnauba wax. I buffed the bowl and stem with a clean buffing wheel to raise a shine. I hand buffed it with a cotton cloth to deepen the shine. The finished pipe is a beautiful looking Oom Paul that looks amazing and feels great in the hand. This tall bowled pipe should be a cool smoking pipe. Have a look at it with the photos below. The dimensions are Length: 5 ½ inches, Height: 2 1/4 inches, Outside diameter of the bowl: 1 1/4 inches, Chamber diameter: ¾ of an inch. I will be putting this one on the rebornpipes store sometime in the days ahead. It may well be the kind of Dunhill Shell Briar that you have been looking for. Let me know if you are interested. Thanks for walking through the restoration of this with me it was a pleasure to work on. 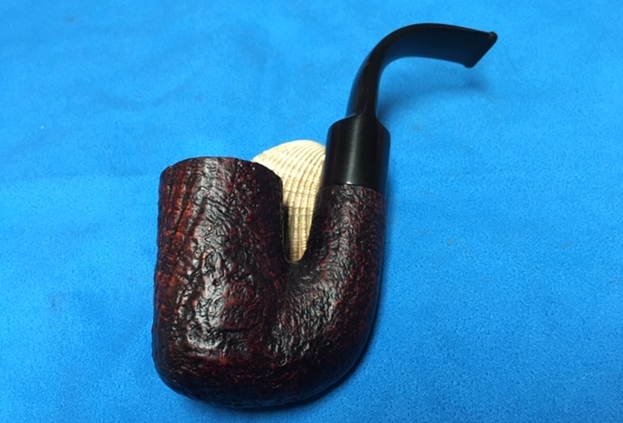 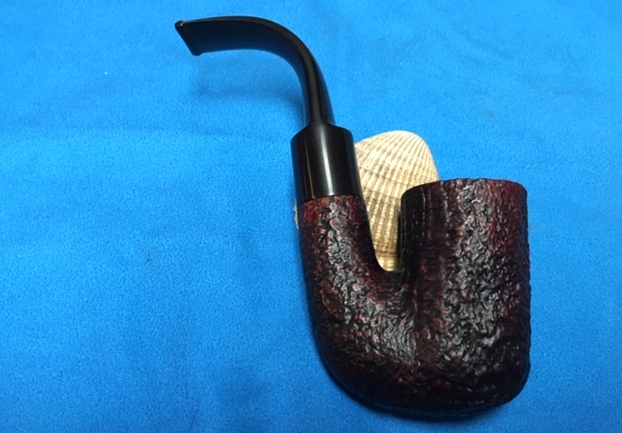 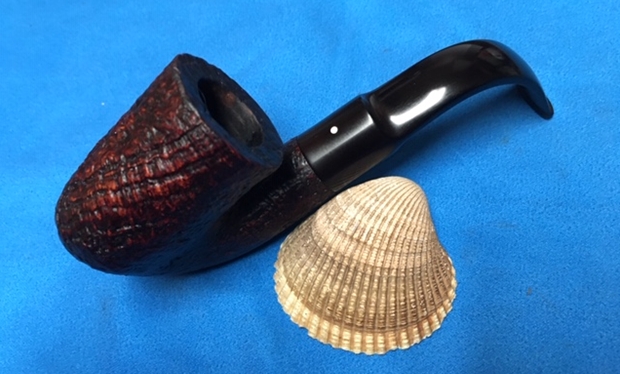 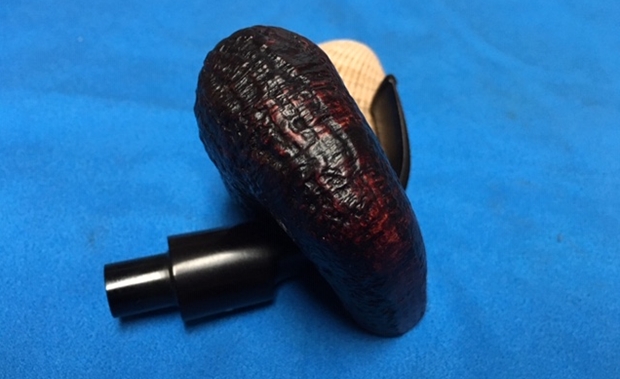