I have no idea who the maker of this pipe is. When I bid on it I thought it might be a Peterson Reject but once it got here I am not so sure. It has no stamping on it other than REJECT in big block letters on the left side of the shank. The briar is not too bad, in fact I can find only one or possibly two fills that are virtually invisible as they are blended into the stain very well. The stem is a cross between a Peterson and a Wellington. There is no p-lip on it – just a straight orific button with the airway on the end of the button not on top. There is a sump in the shank so it is a system pipe of sorts. It is well drilled and has a great draft on it. The band seems to be a stainless steel rather than the cheap reject band put on by Peterson rejects of time past. Sooo, I am not sure who the maker is, nor am I sure why it is a REJECT.

I took it from the box, reamed and cleaned the bowl and shank. The sump is surprisingly new looking. There is no stain or darkening in it, just clean untouched briar. The bowl is darkened but there was not much cake and what was there was only around the top half of the bowl. The stem was minimally oxidized and there was some tooth chatter on the top and the underside of the stem. I did not do much to the bowl finish, merely buffed it with Tripoli and then gave it several coats of carnauba. The stem took a little work as I sanded out the tooth chatter and then went through the list of micromesh sanding pads from 1500-12,000 grit. I also polished the stem with the Maguiar’s Scratch X2.0. I finished by buffing it with White Diamond and then wiped it down with some Obsidian Oil before giving it multiple coats of carnauba and a buff with a soft flannel buffing wheel.

I forgot to take the pictures beforehand but here are some photos of the finished pipe. 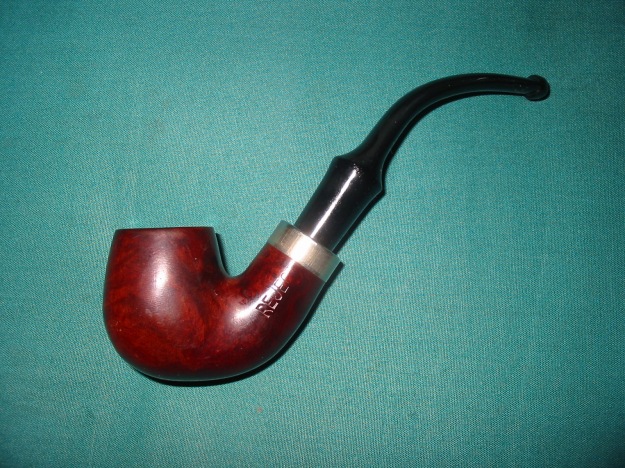