In one of the antique malls in Idaho Falls I found a pipe that I had not seen before. I have had Medico Brylon pipes and other pipes from manmade materials but I had not seen one of these before. This pipe was stamped on the left side of the shank with the words Yello-Bole over Burley with a ® trademark symbol. It appeared to be made of the same material as a Medico that I picked up the day my eldest daughter was born – Brylon. I was sure that the Medico and the Yello-Bole were made by the same company. I was not sure but thought it would be worth picking up as I had not seen one of these before. Besides the price was right – I think it was $8 or so. The bowl had a fairly thick cake at the top and some remnants of the last tobacco smoked in the bottom of the bowl. The stem was stuck in the stem and took a little effort to move it as it was inserted upside down. When I got it out of the shank the aluminum tenon was badly oxidized and there was some corrosion on the surface. The shovel scoop stinger that is a hallmark of Yello-Bole pipes was black with tars and it was stuck in the tenon. The pipe had a heavy smell of English tobacco that made me wonder if it had ever met a pipe cleaner.

I took some close up photos of the bowl and the tenon and shovel stinger apparatus when I got the stem off the shank. The first photo shows the thick cake on the inside of the bowl, the remnants of tobacco and the tars on the rim. It takes a long time (from my experience) and lots of smoking to build up a cake like this in a Brylon pipe. The second photo shows the corroded metal tenon as well as the dirty shovel stinger apparatus. The stem also had some tooth marks and a lot of tooth chatter on both sides of the stem at the button. I was able to wiggle the stinger out of the tenon with a little effort the third photo shows the tenon and stinger.

Since I had not heard of the brand before I did some research before I cleaned up the pipe. I found a link to Pipedia that gave a short history of the brand and I found out that Brylon was developed by SM Frank and Company in 1966. It was a combination of resins and briar dust and was a synthetic that was cheaper alternative to briar. It is virtually indestructible and I have read other place that folks used to throw them in the dishwasher to clean them… The one I had certainly had never met this fate and I would not resort to that method in cleaning it. Here is a portion of the quote from Pipedia with a photo of the Brylon pipe. It also gives information regarding the four lines of Brylon that SM Frank sold.

“This material was immediately used for Yello-Bole pipes, and millions of these pipes have been sold in the decades since then. They continue to be part of the Yello-Bole and Medico brands. At the moment Yello-Bole offers:
• 4 lines of Brylon pipes: Ebony, Nova, Burley and Standard (Prices $15.95 – $18.95) and
• 4 lines of Briar pipes: Spartan, Pug, Checker and Imperial (Prices $19.95 – $24.95).
The Yello-Bole Burley was billed as a great pipe delivering top-notch Brylon quality for just a few bucks. Featuring a push-bit with an aluminum scoop, this no-nonsense pipe is a great starter, or knock-around pipe. http://pipedia.org/wiki/Yello-Bole

I also found another link that lead on tobaccopipes.com that gave a little more history of the Yello-Bole line. I cite from that article below. http://www.tobaccopipes.com/yello-bole-pipes-history/

Yello Bole Changes Hands -Throughout the 1950s the brand changed hands a few times, finally coming to rest with S.M. Frank & Company in 1955. The brand has been made by this corporation ever since. Brylon, a synthetic pipe material, first began to be used after S.M. Frank took control and is still used today.

Brylon pipes are generally less expensive than briar wood pipes, generally costing only a little more than a corn cob pipe. All Brylon pipes come with a push bit and scoop. The scoop helps to trap hot flakes of tobacco. It is removable for those who don’t care for this device.

I also found several pictures of the pipe online. The first is one that I include to show the look of the pipe when it was new. The second and third photos show the same model of Burley that I had found. The pipe has a jaunty look to it that catches the eye. The one I have must have been a good smoking pipe as it was heavily used. 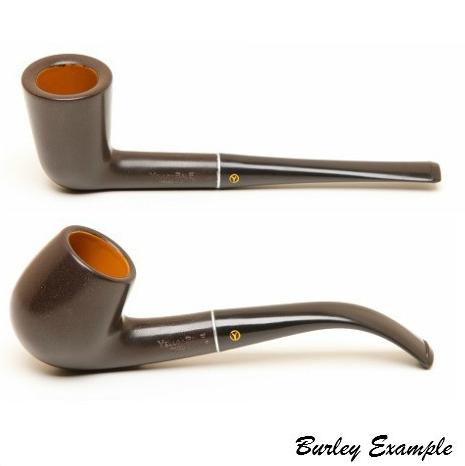 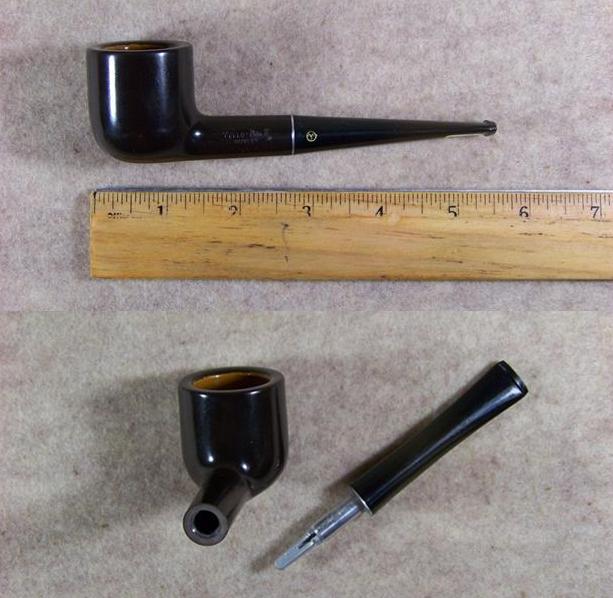 I scrubbed the tenon and the stinger with 0000 steel wool to remove the corrosion and grime. It did not take much scrubbing before it was shiny and clean. I cleaned out the inside of the shank and the stem with alcohol, cotton swabs and pipe cleaners. There is a rubber grommet inside the end of the tenon that holds the shovel stinger tightly in place.

I reamed the bowl with a PipNet reamer using the largest cutting head. I was able to get most of the cake out of the bowl. I also sanded the inside of the bowl to finish removing the buildup. It was fascinating to find some of the Yello-Bole bowl coating underneath the cake on the bottom half of the bowl.

I scrubbed the exterior of the Brylon with a cotton pad and alcohol to remove the grime and build up on the rim. With the bowl finished I worked on the stem. I sanded it with 220 grit sandpaper, 400 grit wet dry sandpaper and with a fine grit sanding sponge to minimize the scratches. On both the top and the bottom side I was able to get rid of most of the tooth chatter but there were some deeper tooth dents that would need some more work. 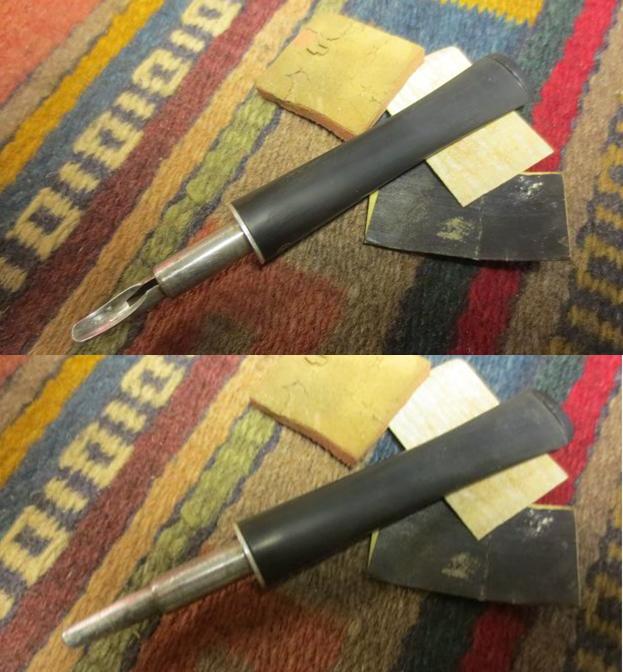 I cleaned the surface of the stem with alcohol and then used clear super glue to fill the deeper dents on both surfaces. 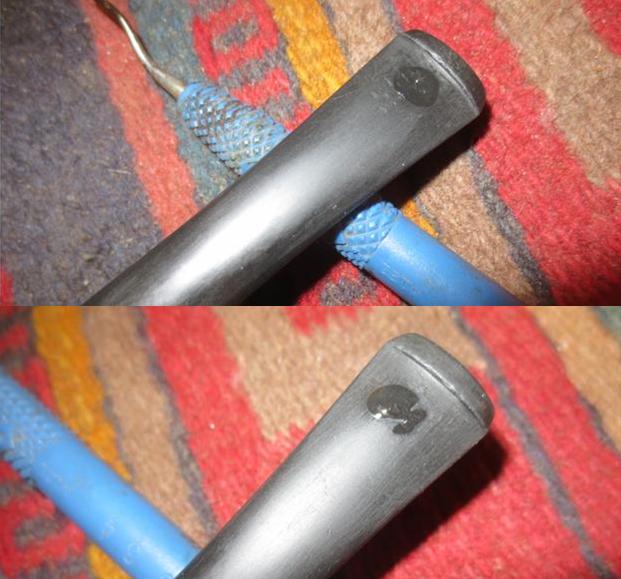 I resanded the stem with 220 grit sandpaper and with 400 grit wet dry sandpaper to smooth out the repairs and blend them into the surface of the stem. I sanded it with a medium and a fine grit sanding sponge.

The nylon stems are a pain to work on and it takes a lot of sanding to get rid of the scratches. I wet sanded with 1500-2400 grit micromesh and paid a lot of extra attention to the repaired areas. I avoided the stamping on the stem so as not to damage that. I rubbed the stem down with Obsidian Oil and while it was still wet sanded the stem with 3200-4000 grit micromesh sanding pads. I gave it another coat of oil and sanded it with 6000-12000 grit pads.

I buffed the pipe and stem with Red Tripoli very lightly to raise a shine on the stem and then finished buffing it with Blue Diamond plastic polish. I gave the bowl and stem several coats of carnauba wax and buffed it with a clean flannel buff. I finished by hand buffing it with a microfibre cloth to deepen the shine. The finished pipe is shown in the photos below. 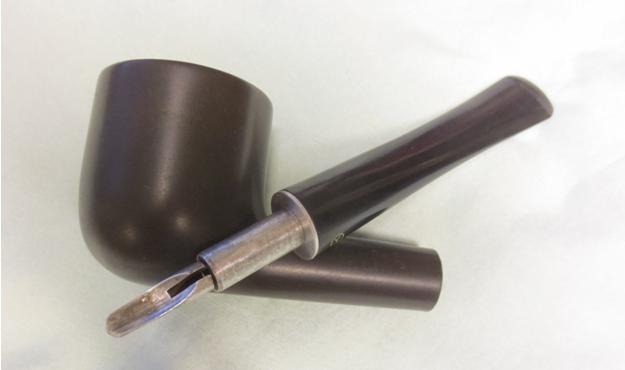