The next pipe I chose to work on was a unique one in many respects. It was a rusticated Panel Lovat that came to us with a very deep silver band. Neither Jeff nor I remember where we got it. But I know it has been here for quite a while. I had no idea what was under the large Sterling silver band but truly expected the worst. The pipe is stamped on the heel of the bowl and reads Jumbo in script [over] Bench Made [over] Marxman (a logo stamp with an arrow going through it), [over] Imported Briar. There was also an upper case “A” stamped at the shank/bowl junction. It has a unique style of rustication that I have become accustomed with on Marxman Jumbo pipe. It includes Tracy Mincer style worm trails but in all different directions with a lot of cross hatching inside the trails. On this pipe the rustication is on the shank and on the left and front of the bowl with smooth portions on the back and right side of the bowl. It is flat bottomed so that it was a sitter. The silver band took away some of the charm of the pipe for me and I was looking forward to removing it and seeing what was underneath.

Jeff had done his usual thorough clean up of the pipe. He had reamed it with a PipNet reamer and finished with a Savinelli Fitsall Pipe Knife. He scrubbed the exterior with Murphy’s Oil Soap and the interior with isopropyl alcohol, cotton swabs and pipe cleaners. He worked on the vulcanite stem with Soft Scrub then let it soak in Before & After Pipe Stem Deoxidizer. It has minor tooth marks and chatter on both sides. I took photos of the pipe before I started my work.

I took some close up photos of the bowl/rim top and the stem to show the condition they were in at this point. The rim top looked very good and the bowl was clean. The stem had light chatter on both sides near the button. 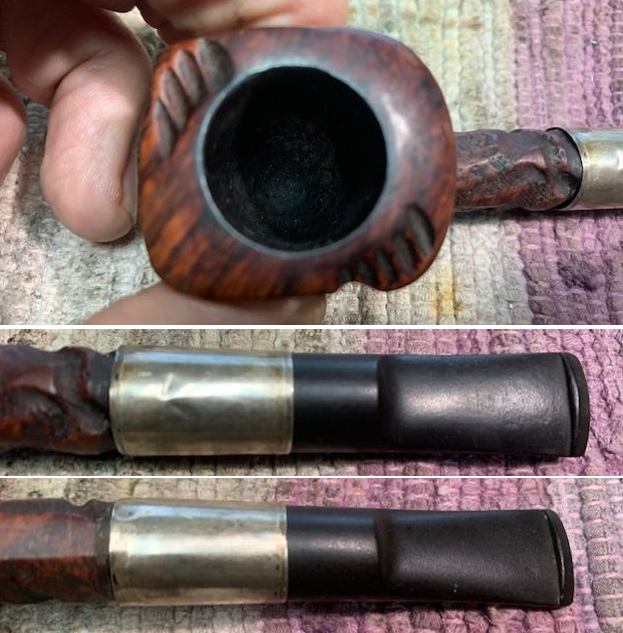 I took a photo of the stamping on the heel of the bowl. It is clear and readable as noted above.

I removed the stem from the shank to give a sense of the pipe. You can see that the band on the shank is quite large. It is a bit of a mystery in that I have no idea what is underneath it! Generally with a band this large it covers some serious shank damage. 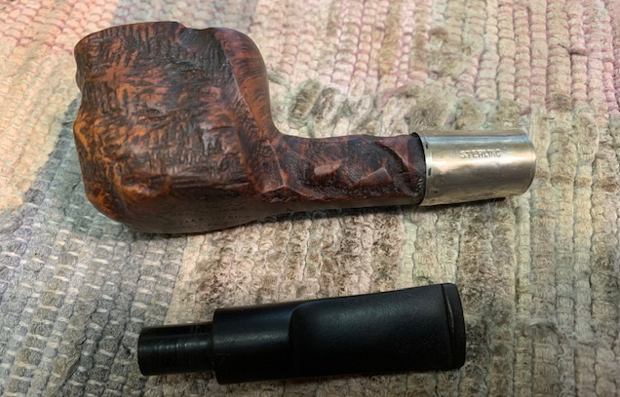 I wanted to refresh my memory of the brand so I turned to Pipephil first to get a short summary of the history (http://www.pipephil.eu/logos/en/logo-m2.html). The site had a side note that the brand was created in 1934 and merged with Mastercraft Pipes in 1953. 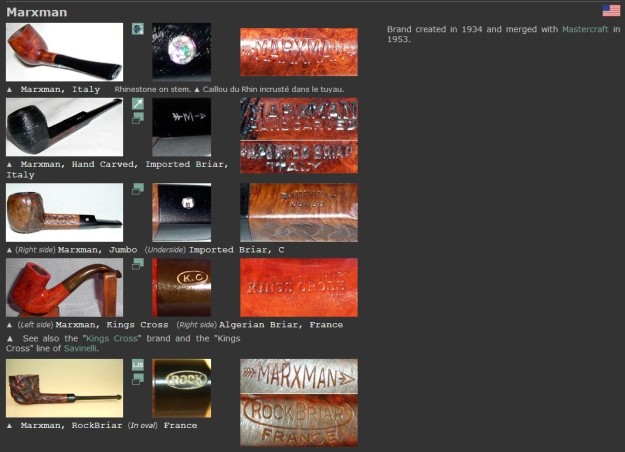 I then turned to Pipedia to find out more information on the brand and the maker of the pipe (https://pipedia.org/wiki/Marxman). The site quote from Pipes, Artisans and Trademarks, by José Manuel Lopes. I include a portion of that information below.

Marxman (Marxman Pipe Company) was created by Robert (Bob) L. Marx in 1934, when he was 29, and after he had worked for the William Demuth Company. His pipes were not outstanding because of the quality of their wood (probably Algerian), but Bob started making unique sculpted pieces, which brought the brand fame in the World of Hollywood cinema. Actors like Zachery Scott, Dennis Morgan, Jack Carson, Alan Hale, Joel McRae, and Ronald Reagan were some of the faces that appeared on the bowls.

Bob knew how to innovate and took full advantage of marketing and press advertising in order to sell the brand–one of his slogans being “Relax with a Marxman”.

From the information on the two sites I learned that the pipe was made between 1934 when the company started and 1953 when the company was taken over by Mastercraft. I have included an advertisement for the Marxman Jumbo that was included on the article (1946 Ad, Courtesy Doug Valitchka).

It includes the following information. “A rare treat for the pipe connoisseur is the Marxman Jumbo, distinguished by a carved bowl that is in perfect balance for easy, comfortable smoking. From the thousands of pieces of briar that flow into our factory we select the perfect and unusual. These are reserved only for the Marxman Jumbo – and are fashioned into truly elegant pipes of exclusive designs – unique in appearance and superior in smoking qualities. Each pipe is an individual artistic creation following the natural shape of the briar. No two pipes are alike. They are priced according to size.”

Now it was time to work on the pipe. I decided to try and remove the band from the shank so I could see what was underneath it. To my surprise and joy the glue had dried out on the band and it was quite simple to remove. I checked out the shank and there was a long (approximately 1 inch) crack from the shank end almost straight forward on the underside. At about ½ inch in it split off to the left side of the shank and was about ¼ inch long. It was not wide spread and the repair appears to have been well done under the band. I would know more once I removed the dried glue and debris on the shank surface. 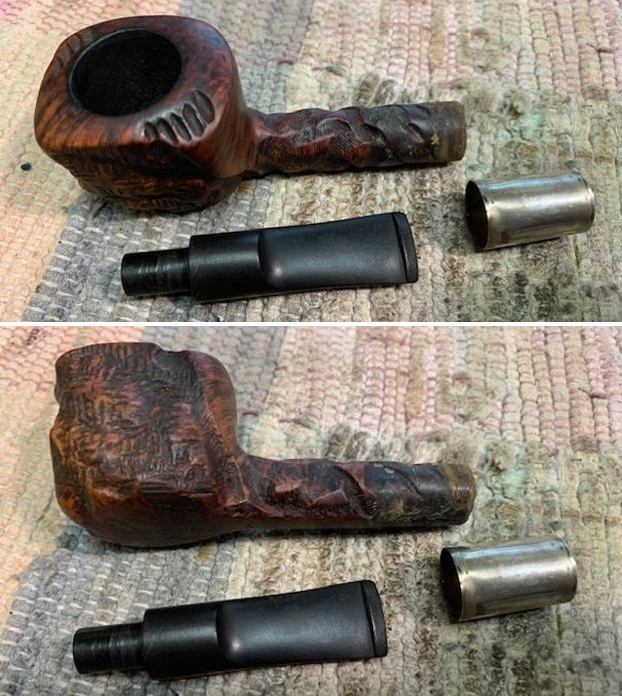 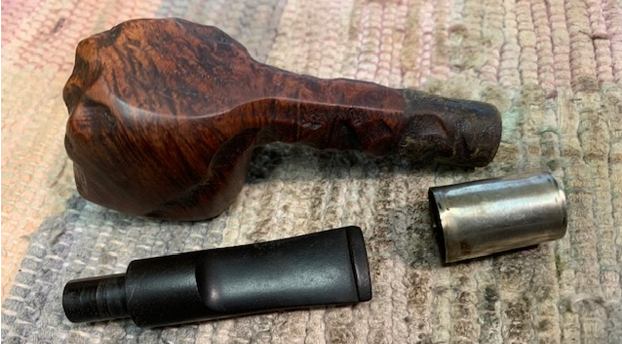 I went through my bands and found a nice looking thinner brass band that had an end cap on it that would work well to hold the shank together once I had clean up the repair.

I wiped down the shank with acetone on a cotton pad. It worked well to remove the glue and the debris on the shank surface. I was careful around the repair to not get the acetone in the repair itself. The repair itself was lightly pitted but otherwise it looked good.

I put a bead of clear CA glue on the crack and the branch crack. I used a dental spatula to fill in the hollow spots with briar dust.

I smoothed out the repaired crack with 180 and 220 grit sandpaper. I was able to blend it into the surface of the shank. Once I had it smooth I put some white all purpose glue around the shank end and pressed the band in place on the shank. I wiped off the excess glue and touched up the repaired area with a Cherry Stain Pen. It matched well and the finished shank and band looked good at this point in the process.

I took photos of the newly banded shank. I like the thinner depth of this band over the deeper Sterling silver one that had been on the shank previously. The finer band gave the briar a chance to really stand out.

I polished the briar and band with micromesh sanding pads – dry sanding it with 1500-12000 grit pads. I wiped the bowl and band down after each pad with a damp cloth. The finish bowl and shank look very good. 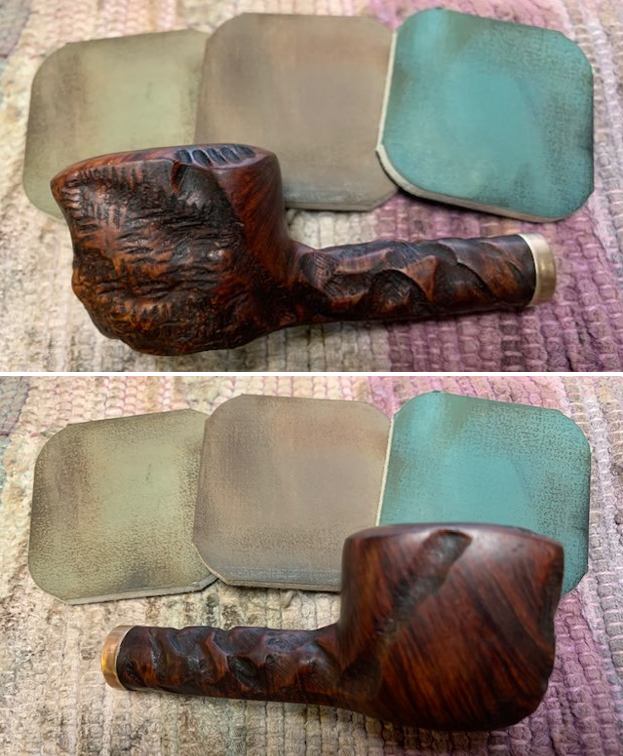 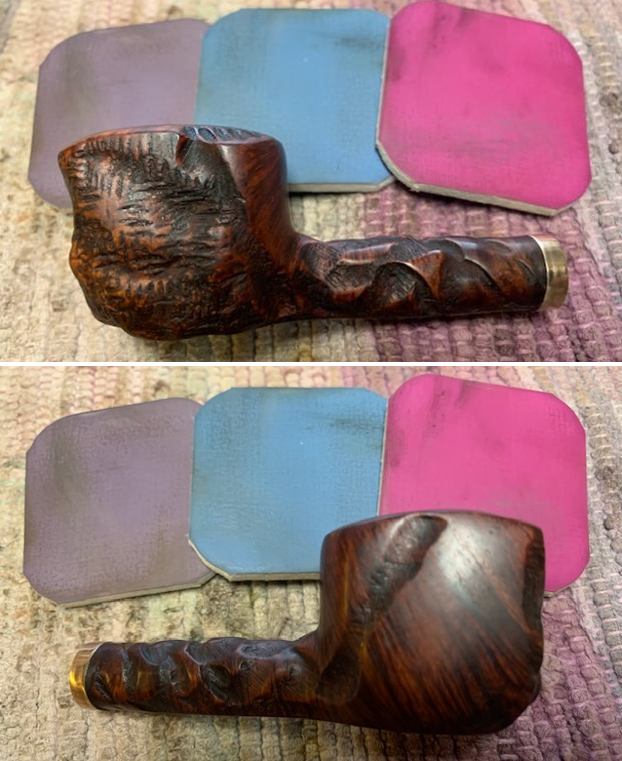 I worked some Before & After Restoration Balm into the surface of the briar with my finger tips and a shoe brush to get into the valleys and crevices of the rustication. The product is amazing and works to clean, enliven and protect the briar. I let it sit on the briar for 10 or more minutes and then buff it off with a soft cloth. It really makes the briar come alive and look quite rich. 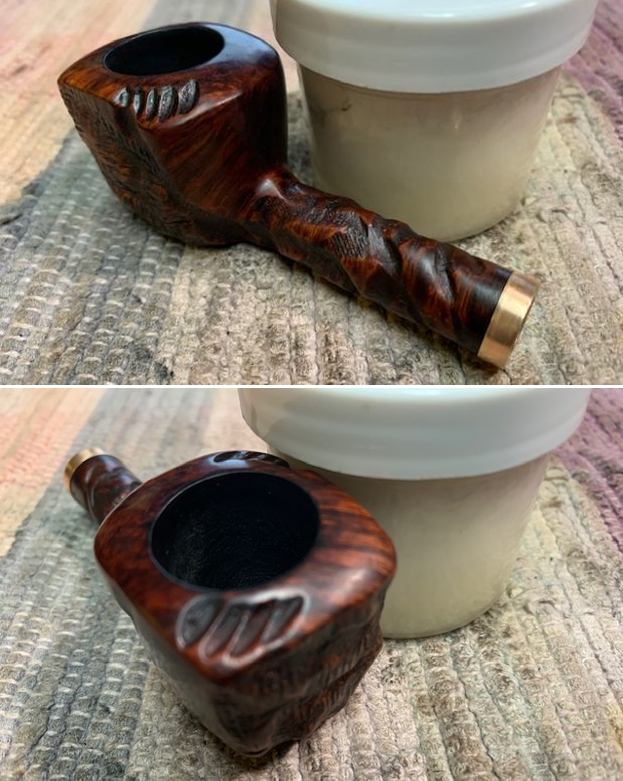 I set the bowl aside and turned my attention to the stem. I polished it with micromesh sanding pads – dry sanding with 1500-12000 grit pads. I wiped the stem down after each pad with a cloth and Obsidian Oil. I finished the polishing with Before & After Pipe Stem Polish – both Fine and Extra Fine. I gave it a final coat of Obsidian Oil.

I put the Jumbo Bench Made Marxman Panel Lovat back together and buffed it on the buffing wheel with Blue Diamond. It raise a shine on the briar and the stem and gave some depth to the look of the carved grooves. I gave both the bowl and the stem multiple coats of carnauba wax on the wheel and buffed the pipe with a clean buffing pad to raise the shine. I hand buffed it with a microfiber cloth to deepen the shine. The pipe turned out to be a unique beauty in its own rugged way. Flat bottom and the panelled shape make it very different from most of the other Marxman Bench Made Jumbos I have worked on. I like the look of the thinner profile band as it really allows the carving on the shank of this Lovat to show. The dimensions of the pipe are Length:5 ¼ inches, Height: 1 ½ inches, Outer diameter of the bowl: 1 ¼ inches wide x 1 ½ inches long, Chamber diameter: ¾ of an inch. The weight of the pipe is 1.31 ounces/37 grams. It really is a uniquely beautiful pipe. I am not quite certain what I will do with it. I am actually sitting looking at it now as I write this. If I choose to sell it I will put it on the rebornpipes store in the American (US) Pipemakers Section. Thanks for walking through the restoration with me. Cheers. 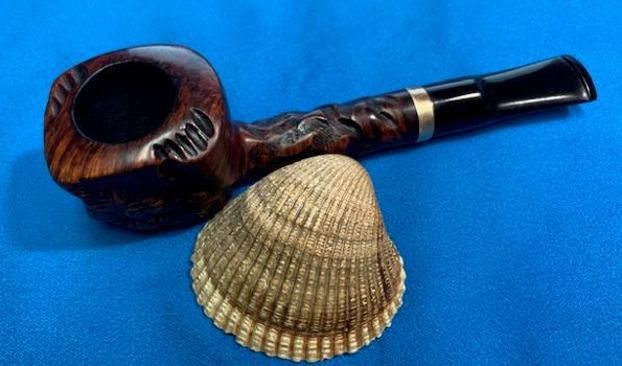 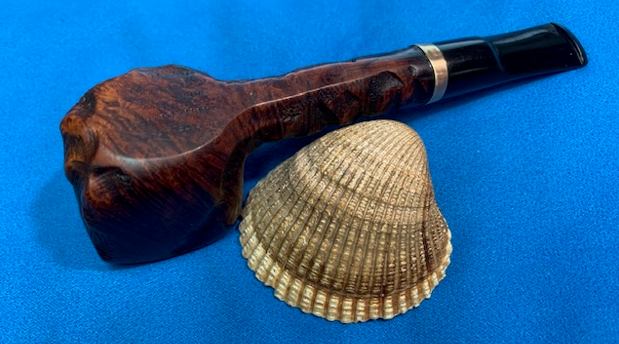 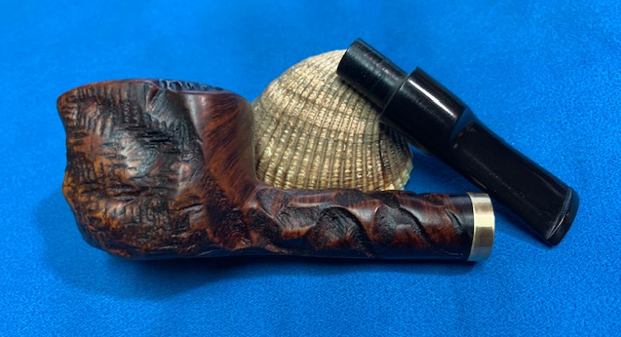 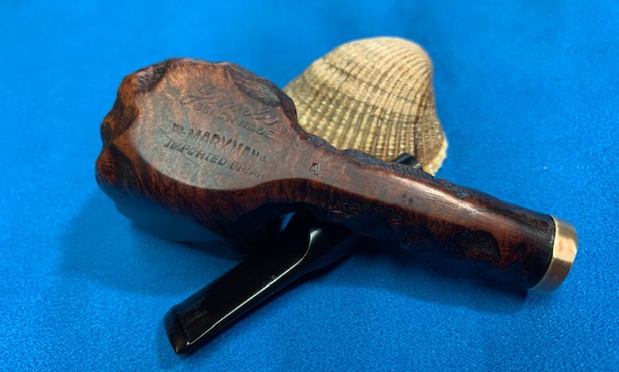 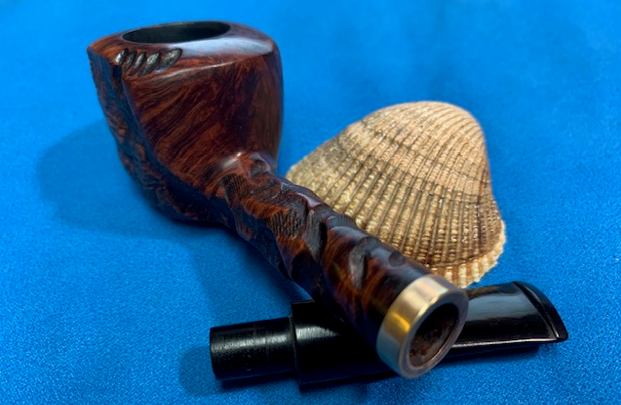