The next pipe on my worktable is very recognizable if you have been around for a while. There is only one original for this style and that is Micoli. The artisan behind the Micoli pipes is an American carver named Robert Eugene (Mic) Burns. I have worked on several Micoli pipes in the past but I have also worked on knockoffs or imitations of his work. When Jeff showed me the photos of this one I was not certain if it was an original Micoli or a knockoff. I would not be able to know until I had thoroughly examined it for his signature. The pipe was in overall good condition with dust and debris in the deep rustication craters. The shank extension is a stacked acrylic with lines of colour between the layers. It is rectangular and joins a rectangular shank that is tweaked to one side and set at an angle. The finish was dull and lifeless and a little dirty from sitting around. There was a medium cake in the bowl and some darkening around the inner edge of the rim. There also appears to be some tars and debris in the rustication of the rim top surface. The stamping on the shank was not visible though Jeff thought there may be some on the acrylic extension. The fancy stem was oxidized and there was light tooth chatter on both sides near the button. Jeff took the following photos before he started his cleanup work on the pipe.

He took photos of the sides and heel of the bowl to show the unique rustication that is on the bowl. There are deep worm trails randomly around the bowl and the high spots are also rusticated with lines and texture. It is an interesting and unique looking finish. 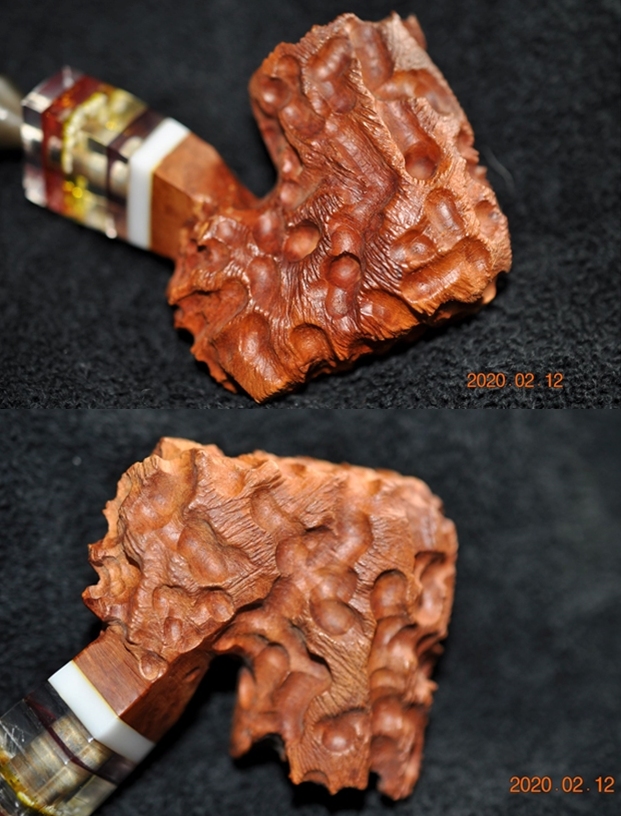 Jeff took photos of the acrylic shank extension to show me in two of the  photos there appeared to be scratching that looked like a signature to me. I would need to confirm it once I had the pipe  in hand it looked suspiciously like a  Micoli signature. It was certainly unique enough to fit in the stable of his pipe that was for sure. 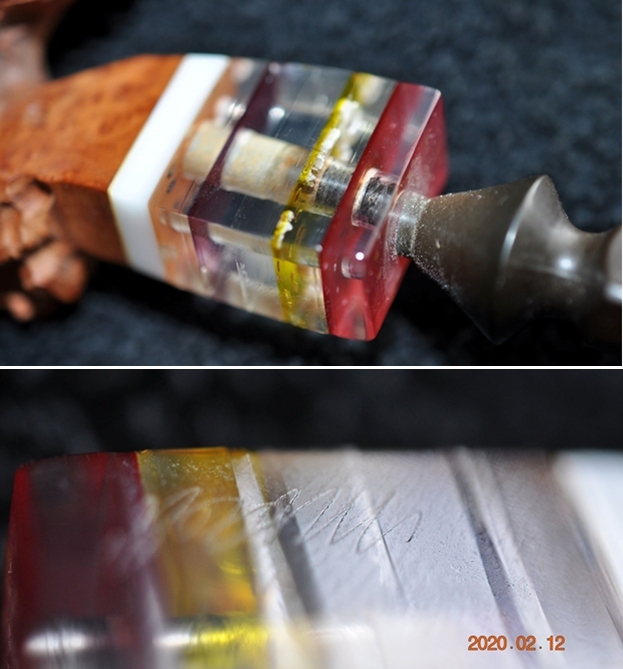 The next two photos show the top and underside of the stem. The oxidation and the light tooth chatter on both sides near the button are visible in the photos.

When the pipe arrived I turned to Pipephil (http://www.pipephil.eu/logos/en/logo-m5.html) to see if he included not only information on the brand  but also a picture of the Micoli signature on the pipes. Sure enough he had a photo of the signature and it matched the signature on the acrylic in the pipe I was working on. So I knew it was indeed a Micoli made pipe. I have included a screen capture of the pertinent section below. 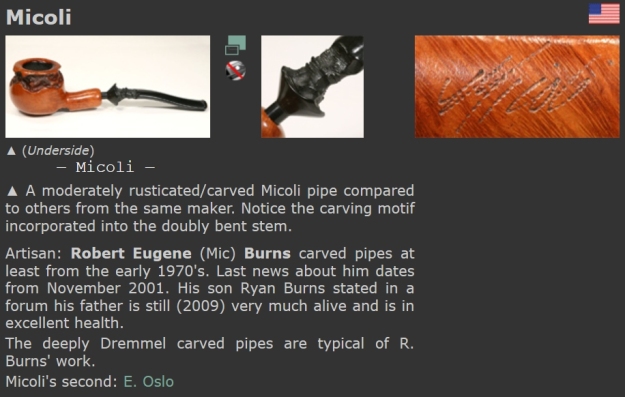 I turned to Pipedia for more information on Robert Eugene (Mic) Burns and the Micoli line of pipe that he carved (https://pipedia.org/wiki/Micoli). I quote it below.

Micoli or “Mic” as he is called by family and friends, has acquired the reputation of being one of the best American pipe makers. He is appreciated by the most prominent of collectors. Educated in the arts, He started this adventure in 1968. His craftsmanship and artistry were dedicated to over twenty years of full time pipe making, with no two alike. In the last twenty years plus he has been partially retired and limits carving to a few pipes a month. ​He has continued sculpting animals and other subjects from brair and other rare woods. Micoli is now 72 years old.​

The signature of Burns’ work is the specific way of rustication he worked out using a Dremel power tool. (The Dremel had been introduced to pipemaking by Teddy Knudsen.)

Burns/Micoli also made the E. Oslo pipes. These can be considered his entry-level pipes as he did not carve these from scratch but rather purchased run-of-the-mill standard shapes from Italian and English pipe makers, such as Savinelli and Comoy’s, and dremeled his signature magic on them.

Interestingly Pipedia also had two photos of a similar pipe to the one that I am working on that would have confirmed that the one I had was a Micoli had I taken time to have a look before. I am including the photos below. 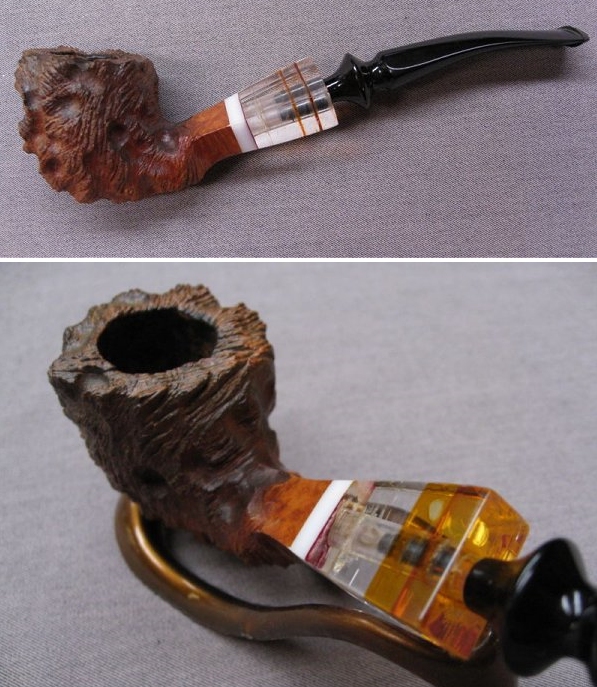 Now it was time to look at it up close and personal. Jeff had great job in cleaning up this Micoli and that in itself was a trick given the deep rustication around the bowl. He had reamed the bowl with a PipNet Pipe Reamer and cleaned up the remnants with a Savinelli Fitsall Pipe Knife. He took the cake back to bare briar so we could check the walls for damage. He scrubbed the exterior of the bowl with Murphy’s Oil Soap and a tooth brush to remove the grime on the bowl and rim and was able to remove much of the grime and dirt. He cleaned out the interior of the bowl and shank with pipe cleaners, cotton swabs and alcohol until they came out clean. The rim top looked much better when you compare it with where it started. He cleaned the stem with Soft Scrub to remove the grime on the exterior and cleaned out the airway with alcohol, cotton swabs and pipe cleaners. I took some photos of the pipe as I saw it.

To show how clean the rim top and stem really was I took a close-up photo of the rim and stem. The bowl was clean and cake free. The rim top is quite clean and the inner edges of the bowl good. The acrylic shank extension also looks good. The black vulcanite fancy stem looks very good. The surface had some light tooth marks but the button edge looked really good.

I took a photo of the signature on the acrylic shank. It indeed reads Micoli. The signature is scratched into the acrylic surface and is clear like the material so capturing it with the photo was a trick!

I removed the stem from the bowl and took photos of the parts. The stem was very tight in the shank and would need to be worked on to get a snug but better fit. 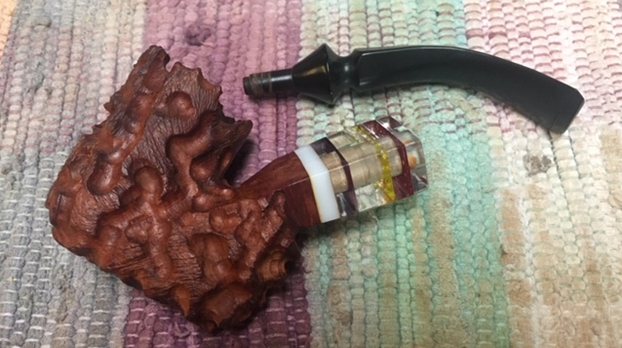 The bowl looked very good so I did not need to do any further work on it. I rubbed the bowl and shank down with Before & After Restoration Balm to deep clean the finish on the bowl and shank. The product works to clean, enliven and protect the briar. I worked it in with my fingers and with a horse hair shoe brush to get it into the deep rusticated areas on the rim and bowl sides. I let it sit for 10 minutes to let it do its magic. I buffed it with a soft cloth. The briar really began to have a rich shine. I took some photos of the bowl at this point to mark the progress in the restoration. It is a very unique finish.

The bowl was finished so I set it aside and turned my attention to the stem. I sanded the tenon down slightly and cleaned out the shank a little more to get a good fit. Once that was done I sanded out the tooth marks on both sides of the stem with a folded piece of 220 sandpaper and started polishing with 400 grit wet dry sandpaper.

I rubbed the stem down with Denicare Mouthpiece Polish – a red gritty paste a lot like Tripoli to polish it after the 400 grit sandpaper. I rub it on with my fingertips and work it into the vulcanite and buff it off with a cloth. It does a great job before I polish it further with the micromesh pads.

I polished the stem with micromesh sanding pads – dry sanding with 1500-12000 grit sanding pads. I wiped the stem down after each sanding pad with a cloth containing some Obsidian Oil. I finished polishing it with Before & After Pipe Stem Polish – both Fine and Extra Fine and buffed it off with a cotton cloth. I gave it a final rub down with Briarville’s No Oxy Oil to preserve and protect the vulcanite stem.

I put the bowl and stem back together again and buffed the stem with Blue Diamond on the buffing wheel. I used a soft touch on the extension so as not to damage the signature. The bowl was just too deeply rusticated to buff with Blue Diamond. I gave the bowl several coats of Conservator’s Wax and worked it into the deep rustication with the shoe brush. I buffed the stem with carnauba wax. I carefully buffed the entire pipe with a clean buffing pad to raise the shine. I finished buffing with a microfiber cloth to deepen the shine. The finished pipe looks very good. It has a very tactile feel in the hand from the deep rustication. It is comfortable and light enough to be a clencher should you choose to use it that way. The finished Micoli is shown in the photos below. The dimensions of the pipe are Length: 5 ½ inches, Height: 2 ¼ inches, Outside diameter of the bowl: 1 ¼ inches, Chamber diameter: 5/8 of an inch. This highly collectible Micoli Rustic turned out very well. It should be a great pipe. It is one that I will be putting on the rebornpipes once I figure out a price for it. Contact me if you are interested. Thanks for reading this blog and my reflections on the pipe while I worked on it. 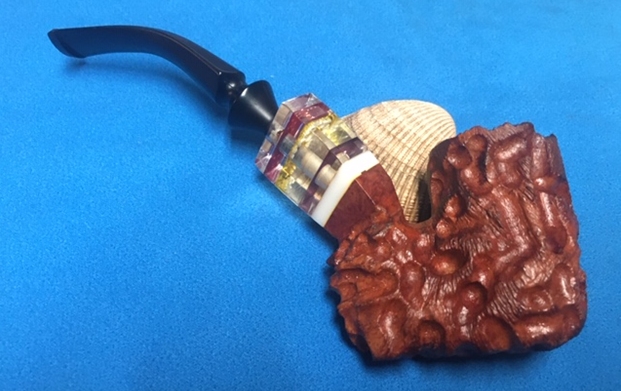 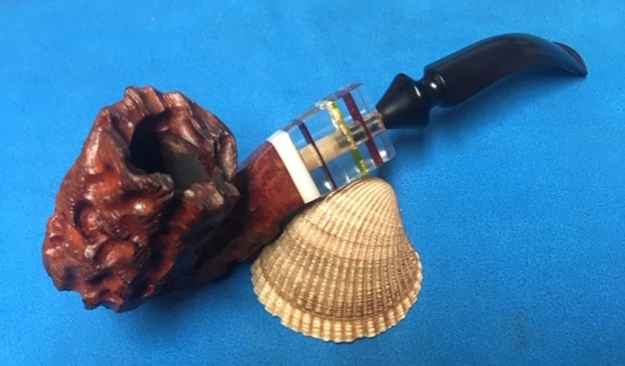 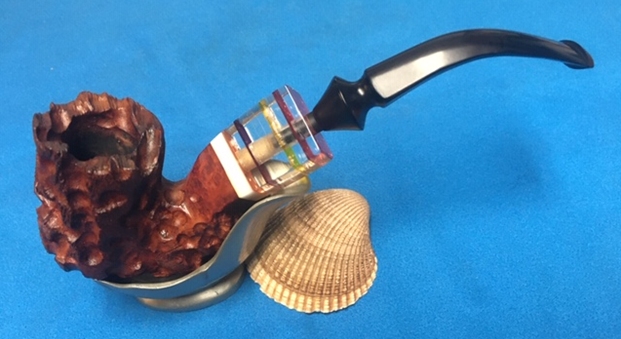 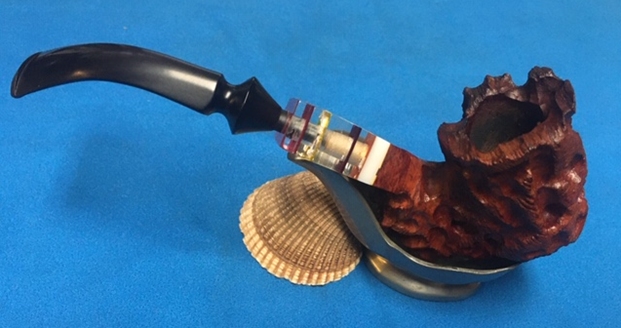 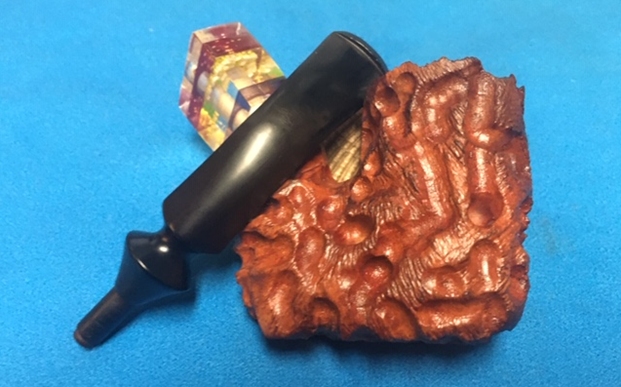 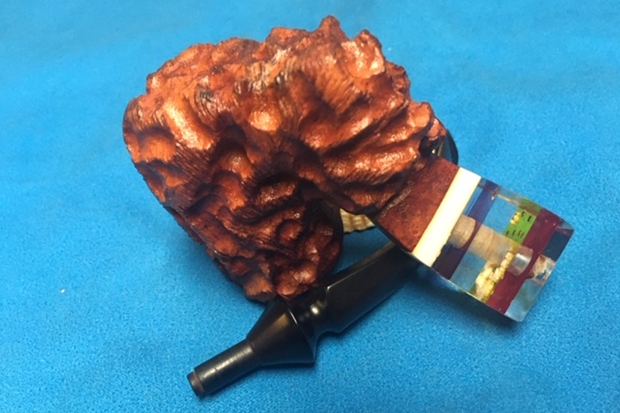