I just returned from a trip to Calgary, Alberta to visit my friend John. I stayed with him and his family for the weekend. On Sunday evening, October 1 I was invited by him to be a part of the pipe club that he started in the city. It rotates through the houses/garages/patios (you get the drift of how this mobile pipe club works). They meet on the first Sunday night of each month and this month’s meeting was at John’s house. He has a great garage with a patio heater that keeps the cold at bay. We sat around a stack of tires with a plywood top that served as a table. Several of us brought tobacco along to share with the club and those were on the table along with the ashtray and a can for collecting the used matches. John and the gents use wooden matches by and large to light their pipes and cigars. Once the can is full the idea is to light it and have a bit of a “camp fire”.

The group is made up of a great bunch of guys from a variety of age groups. The youngest is 19 and the oldest that evening was me at 61. The rest fall across the spectrum of ages. The group is a motley assortment of realtors, engineers, college students, truck drivers, oil crane operators and ministers make for some delightful conversations. The majority of them all attend a church in Calgary called New City Church but there are others from communities around Calgary who share the love of the pipe and the cigar.

The night I visited the conversations around the circle ranged from politics to history, from pipes and tobaccos to cigars, from refurbishing to purchasing new pipes and where to order tobaccos and pipes online. The pipes sported by the members included Petersons, a churchwarden, Kaywoodies, Aldo Velanis, Gasparinis, Meerschaums, Todd Bannard BST pipes, and a Morta that I brought along. The meeting started at a little before 7pm and we shut down at 11pm. It was a quick four hours of great pipe fellowship and camaraderie. 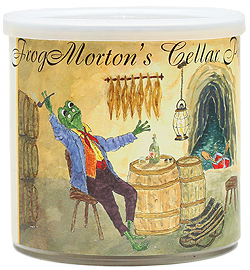 ought along their pipe and tobaccos or some cigars for the evening. I brought along a bag of McClellands 5100 Virginia and a bag of Laudisi Back Down South, a broken Virginia flake, for them to sample and others shared tins of different tobaccos that they had brought. I was able to try Frog Morton in the Cellar for the first time and it was great. It is described on the tin as a mellow, fragrant Latakia blend aged with stave cubes cut from barrels used to mature and flavor Frog Morton’s own special whiskeys.

The room note in the garage was great and the air was blue with smoke. The air circulated out the garage door that was raised and lowered throughout the evening. Each of fellows who came brought along chips, cookies, pop and beverages of choice to share with the group. You will notice from the photo that we were dressed for the chill as fall had definitely come to Calgary. John stepped back and took this photo to show the group and neglected to get a shot of himself in the group. Members brought along pipes to show off and also pipes that they wanted to have repaired. Geoff Carmel is a member of the club and he is a great repair guy who does some amazing restorations that he shows on the Facebook Group – The Gentlemen’s Pipe Smoking Society.

Quite a few of the guys follow rebornpipes and had asked John to see if I would bring along an assortment of pipes for them to see and also purchase if they chose. John messaged me to bring along an assortment of pipes and to make sure that I included a churchwarden in the mix as one of them specifically asked for one. So I put together a group of pipes of different shapes, styles, finishes, brands and prices for them to see. Almost all of the club members are new pipe smokers so the eye candy that I brought along proved interesting to them. Over the course of the evening they browsed through the pipes, checking them out. The engineer in the midst removed the stems and checked the drilling and airflow. Others just looked over the finished and the feel of the pipe in the hand. I think every pipe was picked up several times over the evening. Finally they picked out their purchases, paid and loaded them with some of the tobacco samples on the table.

At the end of the evening we bid each other farewell with promises of keeping in touch. Several of the guys want to pick up a pipe next time I am in Calgary so it looks like I will be bringing pipes with me each visit that I can make it. I had a great evening with the club and enjoyed the flow of conversation and camaraderie that was a natural part of things. I can only say that if you are ever in Calgary, Alberta on the first Sunday evening of the month you would have a great time spending the evening with these guys. They are a welcoming bunch with big hearts and great conversation. Drop me an email if you are interested and I will connect you with them.

7 thoughts on “A Great Night with the Saints & Sinners Pipe and Cigar Club in Calgary, Alberta”