“Never to be underestimated is the value of shielding the water and the wind from the bowl of the pipe.”
— The Author

INTRODUCTION
Well, this isn’t a truly old pipe as was likely envisioned by the proverbial author of the Irish quote above, although it is vintage, having survived our world since the days of the yippies, give or take a few years.Certainly it can’t be ranked among the great brands, either, although its name is well-known to pipe smokers with a grain of salt or more of experience.

But it is still a pipe of note, if not, say,as fast and exotic as a Porsche or as timeless and exquisite as a Paganini violin piece, still unique in its own way. And being both weather- and spark-proof to boot, for the enthusiastic smoker determined to light up and head out into natural elements including high wind and rain, this is the tool he wants. It’s also a peach of an apple, which is uncommon for its brand, and the bowl is crafted (if not by hand) of Algerian briar – other than the Bakelite swivel cover. For briar of that origin, the grain is even very nice.

What sets this wonderful specimen of a pipe apart from all others of its ilk, though, is the absence of the brand’s initials where they once were inlaid in the stem, before the original plastic piece fell out (as I have since gathered through research is common with older pipes of this type), and the way the hole was filled.

By the way, I owe credit for the substitute inlay idea, as opposed to filling the hole with a replacement from a similar pipe or just using black Super Glue, to another restoration guru and my mentor, Chuck Richards. Thanks, Chuck, for the inspired thought, which indeed gives the pipe a definite Southwestern flair, as shall be shown.
So I ask, therefore, what better gift to present to the man who can have his pick from among all the legendary pipes, the man I have come to consider a friend and guide in pipe restoration – Steve Laug – than this simple but utilitarian Mastercraft Weatherproof-Sparkproof, made in France? I mean, Steve has already restored, and in many instances all but re-made, almost every brand and probably every style there is. Besides, he lives in Canada, where such a pipe could really come in handy. 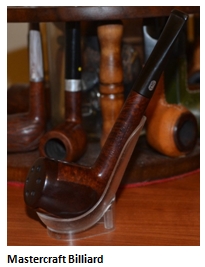 I bought two Mastercrafts – the apple described here and its apparent mate, a tall billiard which had its MC inlay intact – among 19 pipes from an estate. I suppose that makes me responsible for the forced separation of what might have been a lifelong companionship between the two pipes, for all I know. Putting aside any such sentimental thoughts and planning on restoring most of the pipes for sale on my new Website but knowing ahead of time that I wanted to give Steve one of the Mastercrafts, I put considerable thought into which one to make the lucky winner, so to speak. I was seriously leaning toward the billiard because of its larger bowl and the fact that it was all there.

Then Chuck made his breakthrough brainstorm when I asked if he knew where, other than eBay, I might find an old Mastercraft stem with which to replace the smaller pipe’s altogether or extract its precious inlay for re-implant in the original. At the time, Chuck had no idea of my intention to give one to Steve; in fact, I’m sure he thought he was helping me sell the pipe online thanks to the unique character it would have.

Of course, my ultimate choice of the right gift for Steve was made for me on the spot. Dooming the poor billiard to an uncertain future, Chuck’s brilliant advice secured for its more weathered (pun intended) but soon to be made-over adorable petite amiea definite safe harbor in this often cruel world.

THE RESTORATION
With a cursory first look at the over-the-hill pipe, it seems to be a relatively easy restoration, except maybe for the missing stem inlay.

In fact, most of the process was indeed standard including the basic mineral water bath and removal of the rim burn. Where the situation escalated somewhat was reaming the bowl, which was crusted with decades of cake buildup that made a huge pile, sanding the inside of the bowl to make it baby-smooth again and cleaning the underside of the Bakelite cover that was difficult to reach given the facts that the only way to remove the thing seemed to be to break it off, and the maximum space to get under the lid was highly limited.

But I used good old-fashioned elbow grease and ingenuity, and with the reamer and some 150-grit shifting to 400-grit sandpaper, I worked out the three-tiered layers of cake until the bowl was almost down to fresh briar again.

Then I used up quite a few bristly stem cleaners soaked in alcohol getting under the cover and many more through the stem and shank before they came out clean. That alone took considerable time and patience.

I completed the cleaning of the bowl, shank and underside of the cover with a simple soaking with alcohol while the lid was closed.

The next task was to rub out some scratches and dings in the wood with 600 micromesh, which ended up being most difficult on the sides of the bowl where the Bakelite didn’t prevent me from going, and 1000 micromesh on the Bakelite itself.

Now, for Chuck’s suggestion, which was to insert a piece of genuine New Mexico turquoise into the hole in the stem where the original inlay once was fairly poorly set. The better part of valor being discretion, or good judgment, I was willing to take on the task myself but knew to seize a good opportunity to have it done right. That chance presented itself to me when I bought the desired piece of turquoise at a local gem store (http://www.mamasminerals.com/http://www.mamasminerals.com/).

Consulting the store’s gemologist and jeweler, a gentleman and a scholar named Dennis, on how to cut the small piece of turquoise without shattering it and make it a sturdy new part of the stem, I was surprised when he was intrigued enough by my project to offer to do it himself – for $10.

“I’ve done this kind of thing in just about everything, but never a pipe,” Dennis told me.

And so I accepted his offer, and here are the final results after re-staining the rim, buffing the bowl with White Tripoli and carnauba and doing the same to the stem with Red and White Tripoli before handing it over to Dennis to make his much appreciated contribution:

CONCLUSION
To be brief for a change, it was all worth it. Over the past two and a half years, Steve has given me so much help and friendship, in addition to the immense support I receive from Chuck, that this small token of my appreciation hardly seems adequate. Thanks again for everything, Steve. May your days and nights in Canada be windy and rainy often enough to keep enjoying this pipe.