Every once in a while Jeff picks up a unique piece. This is one of those it is a Japanese Kiseru. The bowl and stem are brass and the shank is a piece of reed that is fairly long but could easily have been a replacement for a shorter piece. It is similar in size to the Kiseru that I have here but the reed insert doubles the length of mine. I wrote a blog on my own Kiseru and experience smoking it. Here is the link to that blog:  https://rebornpipes.com/2012/11/09/kiseru-pipes-a-unique-experience-but-if-you-blink-you-will-miss-it/. I am also including a more recent blog on a long Japanese pipe that I cleaned up and wrote about. Here is the link to that blog if you are interested in having a look https://rebornpipes.com/2019/02/03/i-am-not-sure-what-to-call-this-a-japanese-churchwarden/.

I have included a photo of a trio of Kiseru pipes and the tobacco that is smoked in them to give you an idea of the finely cut Virginia that is used in the pipe. 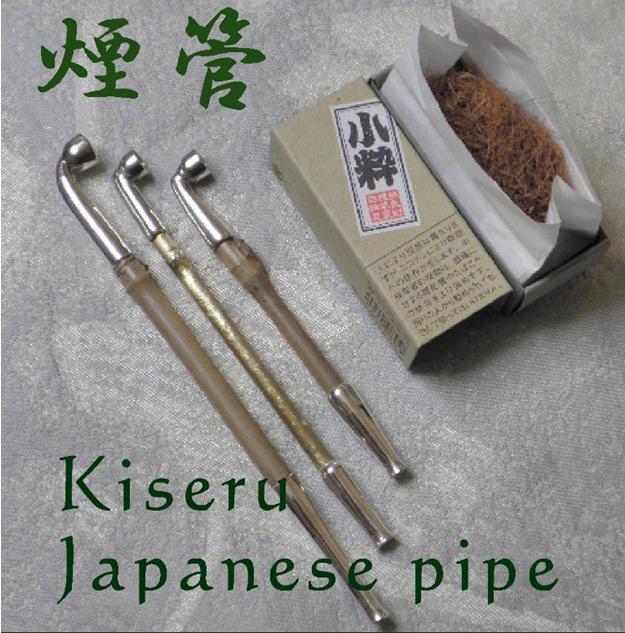 When Jeff received the pipe it was dirty and tarnished looking. The brass bowl and mouth piece were coated with what looked like orange rust. The stippled area on the shank and mouth piece was dirty and the grooves were filled in with grime. The reed shank was dirty and had burn marks on the side where it was laid in an ash tray. The bowl actually had white cobwebs in it from sitting for a long time. Jeff took photos to show the condition of the pipe before he worked on it. 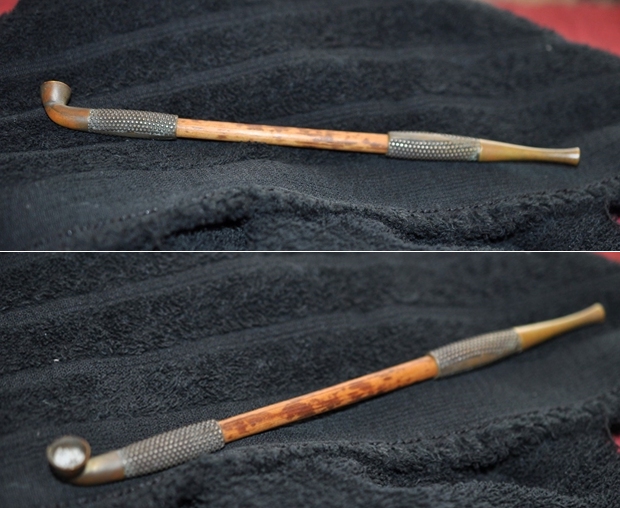 He took some close up photos of the bowl to show the dried ash and cobwebs in it when it arrived.

He took some photos of the stippled mouthpiece end and the flattened underside there and on the bowl end. You can also see the orange rustlike look of the stem and bowl.

Jeff took the pipe apart so you can see the parts that make it up. You can see the wear on the reed and the burn marks mid read. There is definitely some potential in this one! 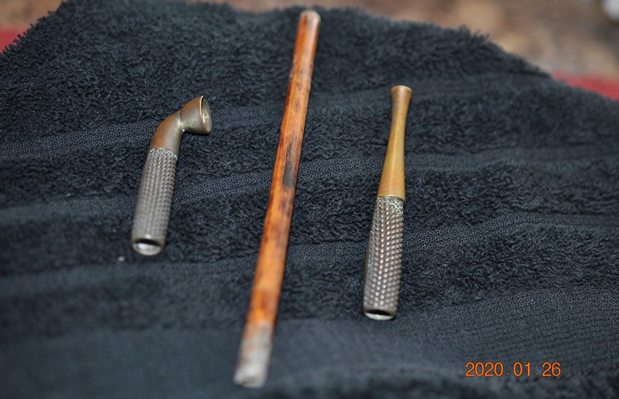 Jeff cleaned the pipe in his usual thorough way – scrubbing the exterior with Murphy’s Oil Soap and Soft Scrub to remove the grime and build up as well as the oxidation. He cleaned out the inside of the pipe with pipe cleaners, cotton swab and alcohol. You can see the brass is looking much better. When it arrived here in Canada it looked pretty good. I took photos of it before I started my part of the work.

I took the pipe apart as well to show the ends of the reed shank. While the burn marks were still present the overall appearance of the reed was much better. The brass actually looked “brassy” and the stippling looked three dimensional! Nicely done!

I took some close up photos of the bowl to show the condition now that it was clean. I have included photos from all angles. You can see the rust on the right side of the bowl.

I polished the brass mouth piece and bowl with 1500-2400 grit micromesh sanding pads. That was enough to remove the rust and give the brass a shine. Once I had finished the shank tube I would buff it and give it some wax.

I polished the reed tube with 1500-12000 girt micromesh sanding pads to raise a shine in the reed and to see if I could minimize the burn marks on the mid reed portion. It actually worked very well and I am happy with the polished reed.

Once the parts were finished I buffed each part on the buffing wheel and then buffed the entirety. I first used Blue Diamond with a light touch on the stippled portion. I gave the entirety several coats of carnauba wax, using a light touch on the stippled portions and keeping the wax on the high spots in those areas. I buffed the pipe with a clean buffing pad and hand buffed it with a micro fibre cloth to deepen the shine. The finished pipe is shown in the photos below. The dimensions are Length: 8 inches, Height of the bowl: 5/8 of an inch, Diameter of the bowl: ¾ of an inch, Diameter of the chamber: 3/8 of an inch. This is an interesting piece of pipe history and if you are interested in adding it to your collection let me know. I will be putting it on the rebornpipes store shortly. Thanks for taking the time to read this blog!

A few years ago a friend of mine called and said that he wanted to stop by for a bowl on the front porch and that he had an interesting gift for me. I don’t know about you but that kind of phone call makes me wonder. I loaded a pipe and sat on the porch to await his arrival. I had no idea what he was bringing. When he arrived he opened his pipe bag and took out the gift he brought for me and another for himself. Until that time I had not heard of the Kiseru pipe and knew nothing about it. Now if you have not smoked a Kiseru you have no idea how small the bowl is or how fine the tobacco is. I personally did not have a clue. So I looked the box and small envelope over before opening either one of them. I did not have the benefit of the photo above that gives you an idea of what to expect.

The photo above shows the box of tobacco and the envelope that held the pipe. If you can imagine the small envelope that holds take out chop sticks then you have an idea of the size of this little envelope. The box is also pretty small. I have no idea what the characters say and would love to know what they say. The label on my little box is identical to the one in the opening photo that I took off of a Japanese catalogue of Kiseru pipes.

I decided to open the envelope first and took out the spiraled brass pipe. The brass is polished and golden in colour. The airway is very open and the pipe is a solid unit. The tip has a formed button that can be held in the teeth to clench the pipe. The other end of the tube is upturned and flared into a bowl. The spiraling on the shank is actually quite beautiful. In the photo below I took a picture of it with a measuring tape so you can get an idea of the overall size of the pipe. It is about 4 ¼ inches long. The bowl is about a ¼ inch in diameter and height.

After I had blown through the pipe and looked it over bow to stern I opened the box of tobacco. In the picture below you can see the finely spun tobacco. The smell is of a Virginia tobacco and the cut is a very fine angel hair like cut. It smells grassy and sweet. It is condensed and pressed into the box and held in a waxed paper envelope. The box is about 3 ½ inches long by an inch wide and an inch high. I have smoked probably 20 or more bowls and the tobacco does not seem to disappear. As I pull off a small chunk to roll into a ball the remaining tobac springs into place. 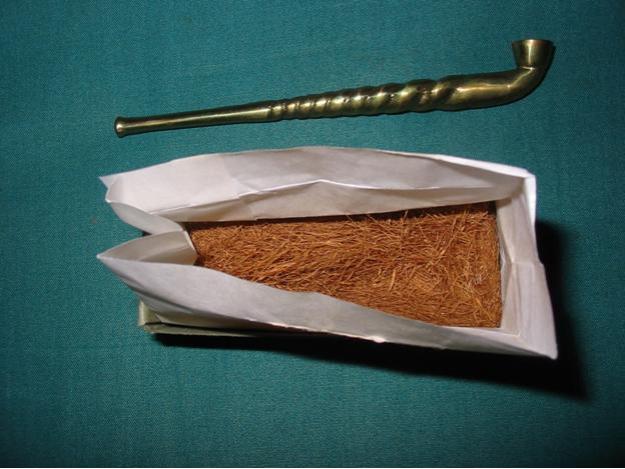 To load the Kiseru you take a small clump of tobacco and roll it into a small ball and press it into the bowl of the pipe. It honestly does not take much so the tobacco that comes with the pipe lasts a long time. My box has been in my humidor for probably 4 or 5 years and is the same moisture level it was when I first opened it. Lighting the bowl is very simple and takes a flick of the lighter and a single light. There is no tamping involved and no fiddling. It is a quick smoke that tastes delightful and burns easily. The flavour is a rich grassy Virginia taste that makes you want to smoke more. The nicotine hit on the bowl is minimal. One day I will have to try it with a small ball brown rope. In the photo below you can see the dottle that is removed from the pipe. There is also a ball of the tobacco in the ashtray that was not smoked for comparison sake.

If you have not tried a Kiseru it is worth the experience. They do not cost much in the grand scheme of things and they will provide you with an experience that is comparable to nothing else that I am aware of. Now that I have written this I think it is time to go and load the bowl and have a puff. One caution though. Once you have lit the pipe, do not blink or you might very well miss the smoke.