Not too long ago a fellow in Eastern Canada was selling a foursome of Brigham rusticated pipes on Facebook. Jeff contacted him and we became the new owners of the pipes. He sent us some photos of the pipes that I have included below. It did not take long for them to arrive here in Vancouver. When they did I was amazed at how good they looked. Two of them were relatively clean and two were used. The top two pipes in the photo were clean and the bottom two were still dirty with cake and debris in the bowls. I decided I would work on them next. I chose the Straight Billiard shaped pipe next – the bottom one in the photos below as marked by the red box outlining it. It is stamped on the underside with the shape number 202 on the heel of the bowl followed further down the shank by Made in Canada followed by Brigham. 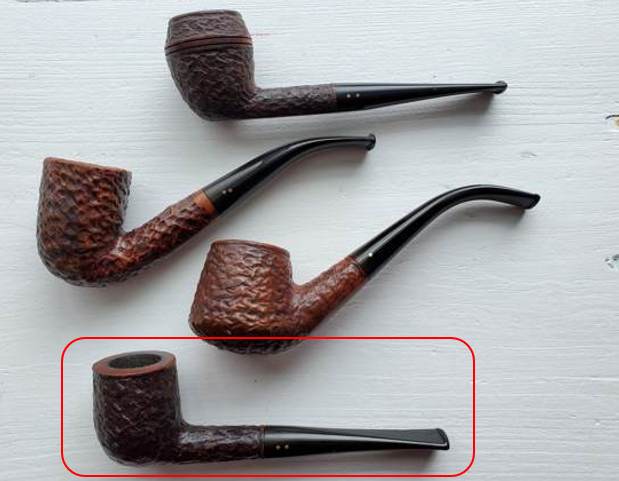 I took photos of the pipe when it arrived. There was some damage on the inner edge and a light cake in the bowl. The shank and airways seem to be dirty with tars and oil. It did not have the Hard Rock Maple filter in the shank but it smelled dirty. The stem was very clean with light tooth marks on the top or underside of the stem. The button was clean with no damage. Overall the pipe looked very good. 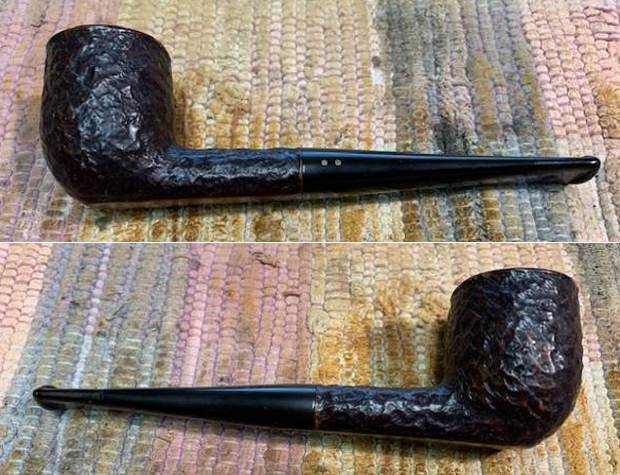 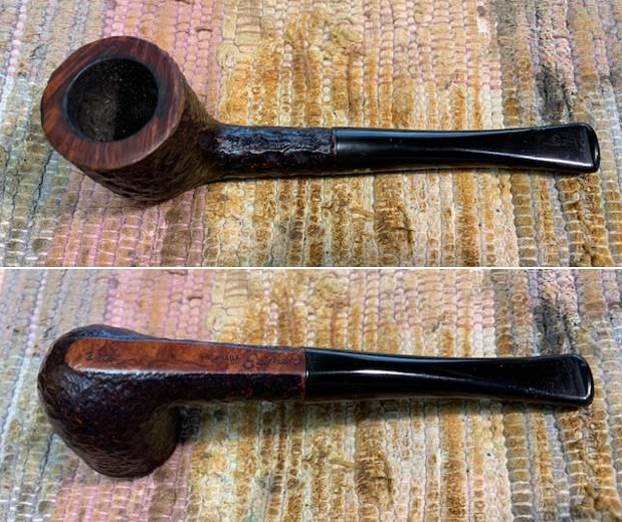 I took photos of the rim top and the bowl to show the condition. The rim top was smooth but you can see the damage on the inner edge of the bowl and the cake that is present. I also took photos of both sides of the stem to show the tooth marks and chatter. Over all the pipe was in good condition. I would need to run pipe cleaners through to remove the carbon in the bowl.

I took a photo of the stamping on the underside of the shank. It is faint but it reads as noted above.

I took a photo of the pipe with the stem removed to give an overall picture of the pipe. It really is quite beautiful. 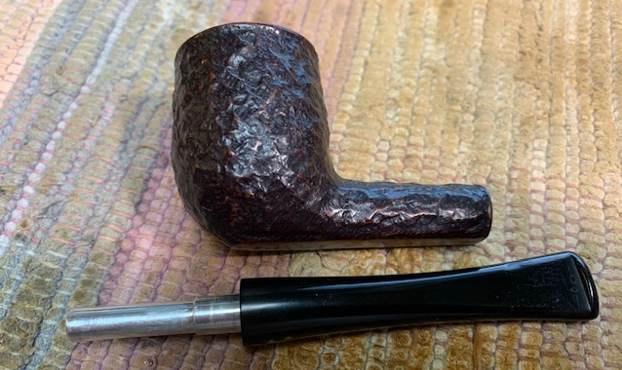 For historical background for those unfamiliar with the brand I am including the information from Pipedia on Brigham pipes. It is a great read in terms of the history and background on the pipes (https://pipedia.org/wiki/Brigham_Pipes). Charles Lemon (Dadspipes) is currently working on a book on the history of the brand. Until that is complete this article is a good summary. I have included it below.

Charles Lemon has also written a great article on the stampings and marking on the Brigham pipes that fit into a time line that he has drafted. It is well worth a read and is fascinating. (https://pipedia.org/wiki/Brigham_Pipes_%E2%80%93_A_Closer_Look_at_Dots,_Dates_and_Markings). I quote from the pertinent section on the time frame for this pipe.

The patent on the Brigham filter system expired in 1955, ushering in the Post-Patent Era (1956 – roughly 1969). The “CAN PAT” stamp was replaced by a “Made in Canada” stamp in block letters. The 1960s saw the introduction of new product lines, including the Norsemen and Valhalla series of rusticated and smooth (respectively) freehand-style pipes created to capitalize on the growing demand for Danish pipe shapes.

This solidly places the pipe I am working on in the period of Brigham production that Charles calls the Post-Patent Era (1956-1969). It is a great looking pipe with an older style rustication pattern than the later Brighams that I have worked on.

Charles also put together a chart that helps the restorer to understand the Brigham dot system. I quote from the same link on Pipedia as noted above.

Brigham pipes are renown in the pipe world for their famous “Brigham Dots”, a system of brass pins inset in the stem to denote the grade of each pipe. The original 8-grade pinning system, used for 42 years between 1938 and 1978 (spanning the Patent, Post-Patent and Canadian Eras) looked like this:

I knew that I was dealing with a pipe made between 1956-1969 from the Post-Patent Era. It sports 2 dots making it Brigham Select pipe with a 3 digit shape number 202. Now to do a bit of spiffing with the pipe itself.

I reamed the pipe with a PipNet pipe reamer to remove the light cake from the bowl walls. It was uneven and needed to be removed so I took it back to bare briar. I cleaned up the reaming with a Savinelli Fitsall Pipe Knife and then sanded the bowl with a dowel wrapped with 220 grit sandpaper to smooth out the walls.

I cleaned out the internals with alcohol, cotton swabs and pipe cleaners to remove the debris and the oils from the shank and tenon as well as the airway into the stem and bowl.

I cleaned up the damage to the inner edge of the rim with a folded piece of 220 grit sandpaper and made the bowl edge both smooth and round.

I polished the smooth rim top with micromesh sanding pads – dry sanding it with 1500-12000 grit pads. I wiped rim top down with a damp cloth to wipe off the dust and debris. It started to look very good. 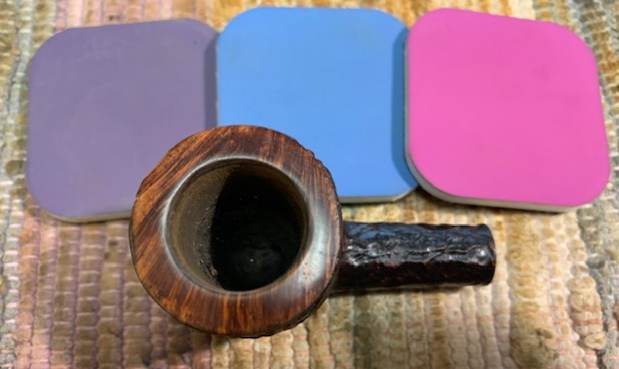 I rubbed the bowl down with some Before & After Restoration Balm. I worked it into the briar with my fingertips and a horse hair shoe brush. The product works to clean, renew and protect briar. I let it do its work for 15 minutes then buffed it off with a soft cloth. The pipe is really quite a beauty.

I set the bowl aside and turned my attention to the stem. There were tooth marks (light but present) on both sides ahead of the button. I “painted” the surface of both sides with the flame of a Bic lighter and was able to lift the marks. I sanded the remnants smooth with 220 grit sandpaper and started the polishing with 400 grit wet dry sandpaper. I was able to remove all of the marks.

I polished out the scratches remaining in the surface of the stem ahead of the button on both sides using micromesh sanding pads. I dry sanded the stem and them wiped it down with a cloth impregnated with Obsidian Oil. I finished polishing it with Before & After stem polish – both Fine and Extra Fine. I gave it a final coat of Obsidian Oil and set it aside to dry. 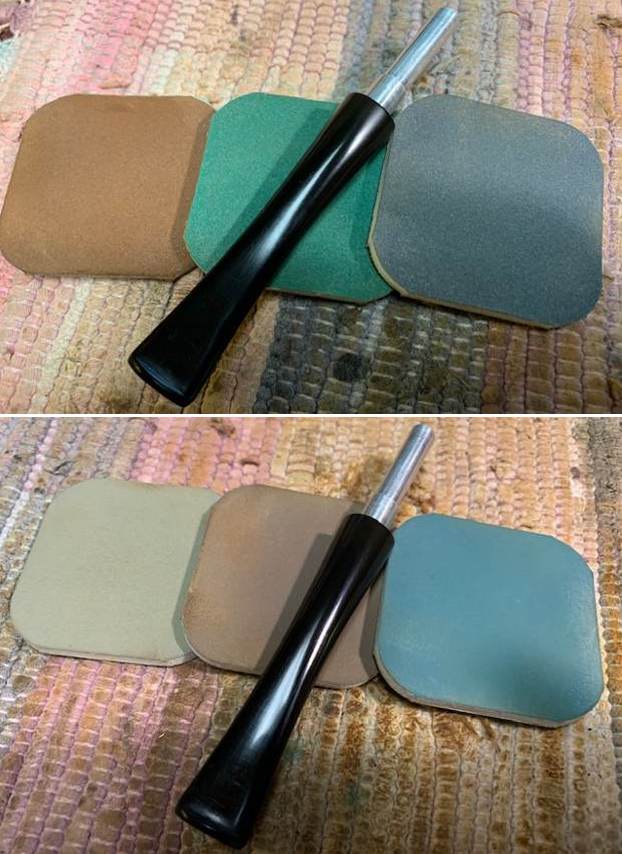 I fit the clean and polished stem with the Brigham Rock Maple Distillator and took photos to show what it looked like. This is in essence a hollow Maple wood tube that serves to filter out the moisture and deliver a clean and flavourful smoke.

I am excited to finish this Post-Patent Era Made in Canada Brigham Select 202 Billiard. I put the pipe back together and buffed it with Blue Diamond on the buffing wheel. I gave the bowl multiple coats of Conservator’s Wax and the stem multiple coats of carnauba wax. I buffed the pipe with a clean buffing pad to raise the shine and hand buffed it with microfiber cloth to deepen the shine. It is fun to see what the polished bowl looks like with the rusticated finish. Added to that the polished black vulcanite stem with the shining brass pins was beautiful. This mixed grain on the rusticated Brigham 202 Billiard is nice looking and the pipe feels great in my hand. It is light and well balanced. Have a look at it with the photos below. The dimensions are Length: 5 ¾ inches, Height: 1 ¾ inches, Outside diameter of the bowl: 1 ¼ inches, Chamber diameter: ¾ of an inch. The weight of the pipe is 1.16 ounces/33 grams. It is a beautiful pipe and one that will be on the rebornpipes store in the Canadian Pipe Makers Section soon. If you are interested in adding it to your collection let me know. Thanks for walking through the cleanup with me as I worked over this pipe. Thanks to each of you who are reading this blog. Remember we are not pipe owners; we are pipemen and women who hold our pipes in trust until they pass on into the trust of those who follow us. 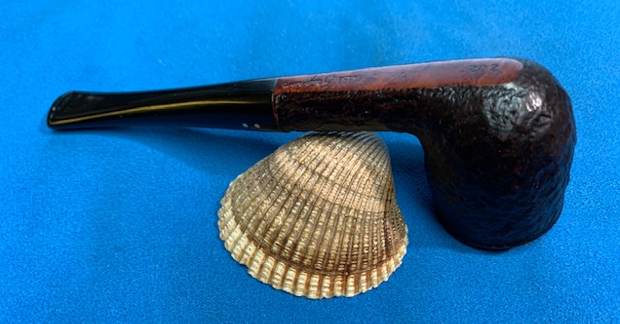 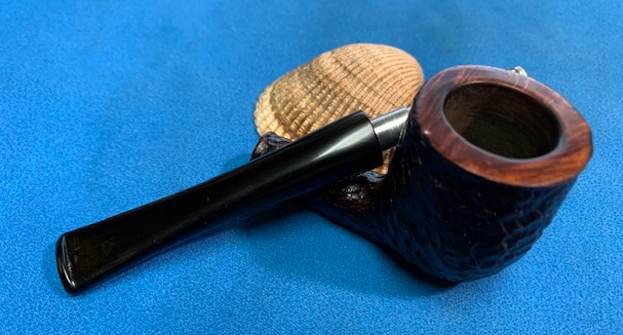 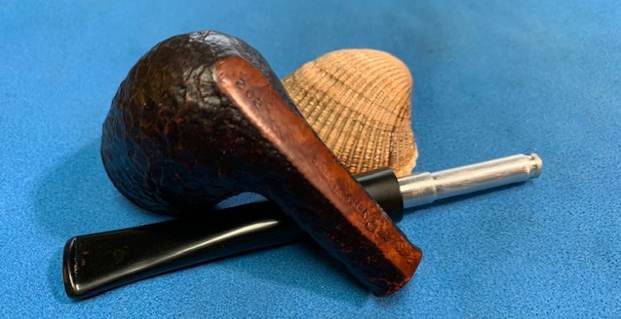