I decided to turn my hand to something a little different this time around and work on a small cigarette holder that came in one of the lots of pipes that my brother and I picked up lately. It has a briar holder and a vulcanite stem. The stem turns to the right and the left and as it turns the cigarette is expelled from the holder. Turned to the left and the stem is removable and reveals a metal twisted/spiral stinger apparatus to collect the tars and oils from the then filterless cigarettes. This one is interesting as well in that it is stamped on the left side of the briar shank with the Ropp logo in an oval over the word EXPELLO on the mouth piece next to that are twin horizontal bars. On the right side of the shank is a COM stamp circle Made in France with the word “in” inside of the circle. The briar was nicked and lifeless and the vulcanite oxidized with tooth chatter on both sides at the button. I took photos of the holder after Jeff had cleaned the holder and sent it to me. 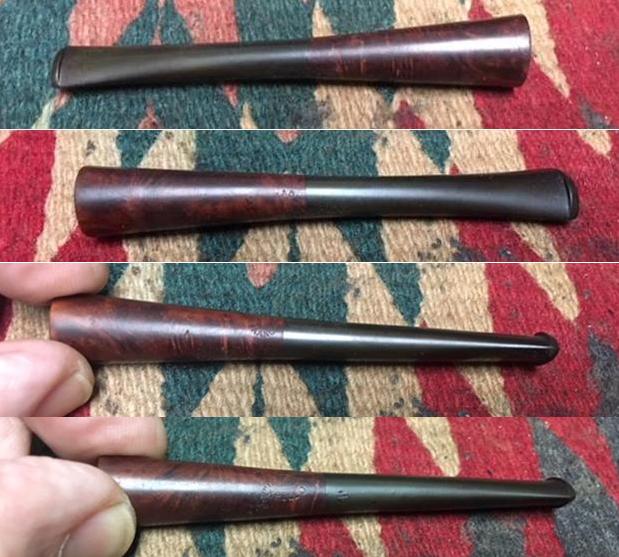 I did a little research on the Ropp brand to see if I could find out any info on the holder. On Pipedia there was a short article on the brand (https://pipedia.org/wiki/Ropp). It read as follows:

I also found that the brand was distributed by A Frankau & Co. known for making BBB pipes. They were also a sole agent for the pipes Cherry Wood of the Ropp House to cover the United Kingdom and its colonies. They also distributed tobacco, pipe-racks, lighters, equipment of cleaning for pipes, cigar-holder and cigarettes, cases with cigars and cigarettes, humidors). (https://pipedia.org/index.php?search=Ropp+Cigarette+Holder&title=Special%3ASearch&go=Go).

Jeff cleaned up the inside of the briar and the stem. He took the pipe apart and cleaned out the twisted metal stinger apparatus with Murphy’s Oil Soap and a tooth brush. He scrubbed the inside of the piece with pipe cleaners, cotton swabs and alcohol.

I polished the briar and the stem with micromesh sanding pads – wet sanding with 1500-2400 grit pads and dry sanding with 3200-12000 grit pads. I wiped the stem down with Obsidian Oil after each grit of micromesh. After the final pad I gave it a final coat of oil and set it aside to dry. 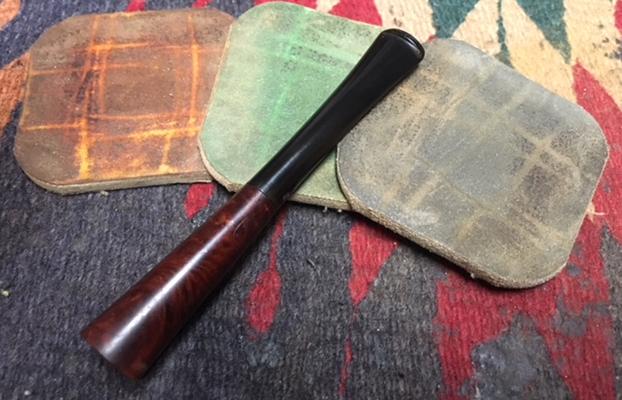 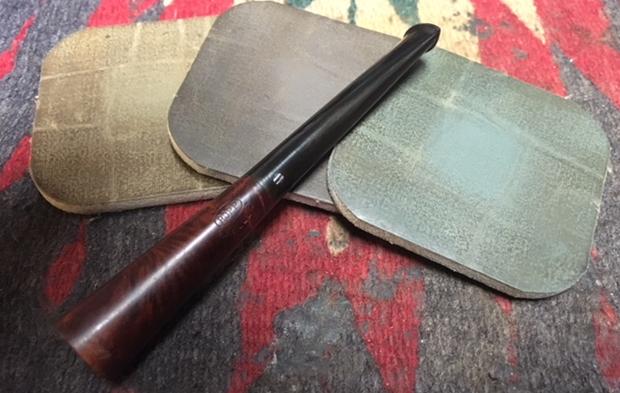 I worked Before & After Restoration Balm deep into the briar to clean, enliven and protect it. I worked it into the smooth finish with my fingertips. I worked it into the edges of the briar on both the end that held the cigarette and the end where the mouth piece was inserted. I set it aside for a few minutes to let the balm work. I buffed it off with a cotton cloth to polish it. The briar really began to have a deep shine. I took some photos of the holder at this point to mark the progress in the restoration. The grain on the briar is really beginning to stand out and will only do so more as it is waxed.

I waxed the briar and vulcanite stem with Conservator’s Wax and after it dried I buffed it with a soft cloth to raise a shine.

I buffed the stem and briar portion of the holder with Blue Diamond to polish the briar and the hard rubber. I gave it multiple coats of carnauba wax and buffed it with a clean buffing pad to raise the shine on the piece. I hand buffed it with a microfiber cloth to deepen the shine. The finished piece is shown in the photos below. It is an interesting piece of tobacciana that makes a nice addition to any collection. 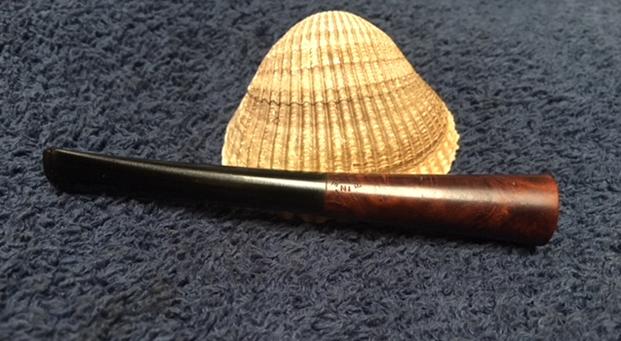