In a trade with Dave Gossett I acquired this Kaywoodie Super Grain Apple. The bowl was in really great shape other than a few nicks and dents here and there. The finish was clean and the bowl had been cleaned and reamed. There were some small pin pricks on the back left side of the outer edge of the rim that looked to me were made when the pipe was dropped. They had been sanded a little so that the outer edge was no longer even around the bowl but sagged at this spot. The top of the rim was clean and smooth. The pipe was stamped on the left side of the shank with the words Kaywoodie over Super Grain over Imported Briar. The right side is stamped with the shape number 33. In looking through the various shape charts I found that the 33 was the stamping for a Large Apple (see the first photo below). The aluminum stinger had been broken off in the stem. It was hard to tell if I was dealing with what had originally been a four hole stinger or a three hole stinger. I know that many can tell the age on these KW’s by the stamping but I am not one of them. I knew that the three hole stinger/tenon apparatus was pressure fit in the stem and the four hole was threaded and screwed into the stem. Once I was able to drill out the broken stinger I would have a better idea regarding the type of stinger it had. The stem itself was fairly clean. There were some ripples in the stem on both the top and the bottom of the stem near the button. This told me that there were tooth marks that someone had either tried to buff out or sand out. These would need to be smoothed out. The interior of the stem and the shank were clean of debris and tar.

The next three photos show the broken metal tenon in the stem and the state of the stem and bowl when it arrived. The briar has some beautiful straight grain and birdseye. 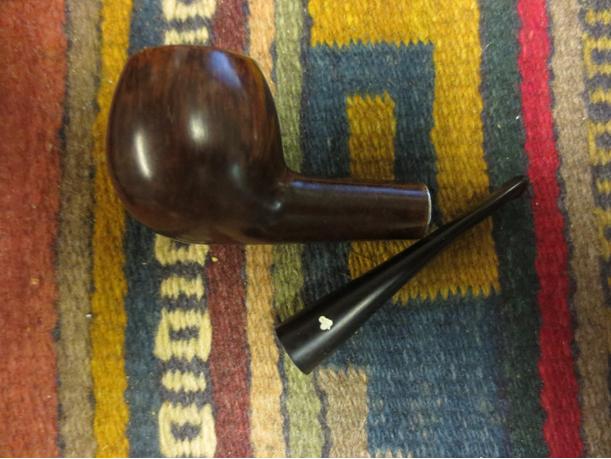 I had several broken Kaywoodie stems in my can of stems that I cannibalized the stingers from. In the photo below the top stinger is the three hole one with the pressure fit end that fit in the stem. The bottom stinger is the four hole one that is threaded and screwed into the stem. What made it a bit interesting for me is that both stingers came from stems that had the same white clover leaf as the stem I was working on.

I used my cordless drill to act as a holder for the drill bit and turned the stem onto the bit to begin to remove the broken tenon/stinger. I started with a bit slightly larger than the airway on the broken part. I worked my way up to a size that finally grabbed a hold of the broken tenon piece in the stem and when I twisted the bit out brought metal piece with it. The second photo below shows the broken tenon piece amongst the bits of aluminum. I had my answer it was the pressure fit three hole stinger/tenon apparatus. (I should have done this with a paper down to catch the bits and bobs of metal but did not so I ended up having to vacuum up my mess.)

I cleaned out the inside of the stem with pipe cleaner and alcohol and the drilled out end with cotton swabs and alcohol. I cleaned the new stinger/tenon the same way and polished it with 0000 steel wool. I applied twisted the tenon into the mortise and then applied glue to the end that would go into the hole in the stem. I pushed the stem in place on the glued part and let is set. I unscrewed the stem and set it aside to let the glue cure. I used an all purpose white glue to set the tenon in place because I wanted to be able to adjust the fit with heat. I topped up the glue around the end with some clear super glue. 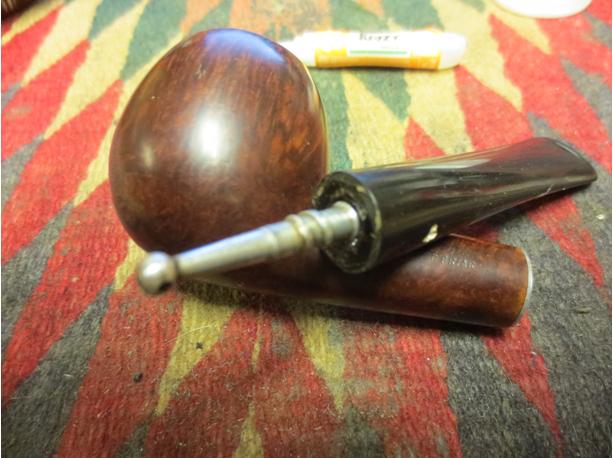 With the tenon in place it was time to clean up the damage to the stem. I sanded it with 220 grit sandpaper to remove the wavy lines and clean up the residual tooth marks. There was also a nick in the side of the stem on the underside so I cleaned up the taper there as well. I then sanded it with a medium and a fine grit sanding sponge to minimize the scratching. 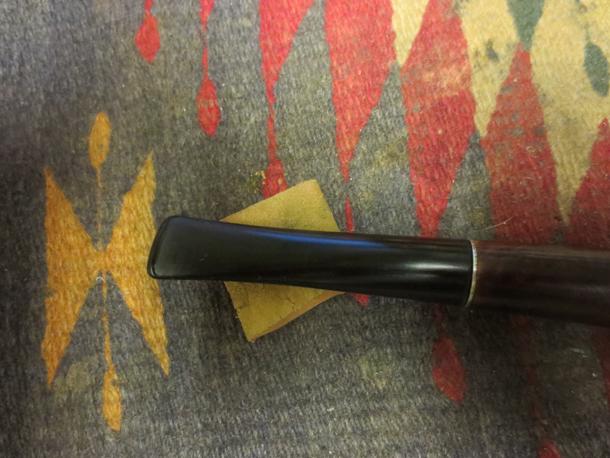 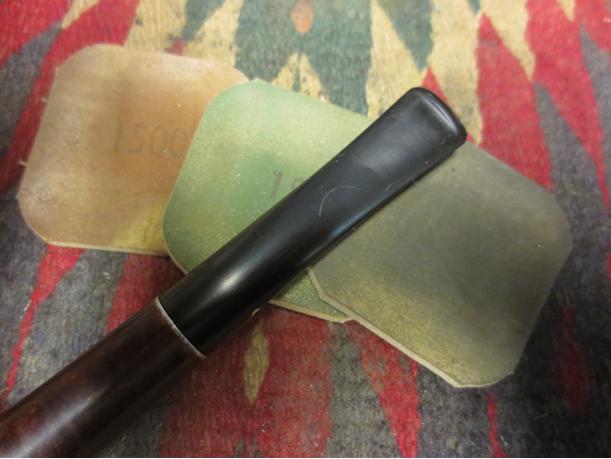 I sanded the bowl with 4000-12000 grit micromesh sanding pads to smooth out the outer rim edge and the sides of the bowl. I wiped the bowl down with some pipe polish. I buffed the bowl and stem with Blue Diamond polish and then gave it multiple coats of carnauba wax. I buffed it with a clean flannel buff and then hand buffed it with a microfibre cloth. The finished pipe is shown in the photos below. Thanks Dave for the opportunity to restem this beauty. It was a fun one to work on. Thanks for looking. 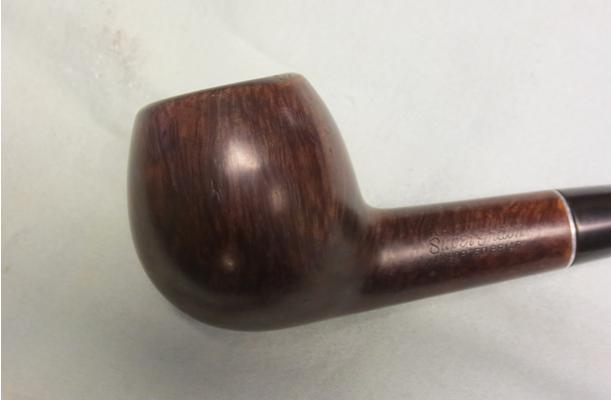 I am glad to see the work you did on this one. I like the overall look far better than what it was when I sent it to you. Great job.

I acquired this Dutch-made bent bulldog from Steve Laug of RebornPipes in a recent trade. It was in pretty good shape to start, which is a nice change from some of the estate pipes in my refurb box. It is stamped “Big-Ben” over “Grand Seigneur” on the left face of the diamond shank, and “15479S” over “Made in Holland” on the right shank. The stem is stamped with a “B” in a circle.

Here’s the pipe as received:

As the pics show, the pipe had been used but not abused. The stem was not oxidized, but had one deeper tooth dent that would need attention. The obvious flaws in the stummel were two medium-large factory fills that had shrunk and would need replacement. On a painted pipe like this, replacing fills means completely stripping and refinishing the stummel, as it would be very tricky to try to make spot-repairs.