I picked this beautiful older Karl Erik apple up on EBay. When it arrived I loved the looks of it and decided to work on it immediately upon opening the package. It had many dents in the sides of the bowl and front and back. The bowl had some darkening along the back side of the bowl near the rim. It was not charred or burned just darkly stained. The rim was clean of tars and oils and the bowl had been reamed already. It was a very clean pipe other than the darkening and the dents on the rim and bowl sides. The stem was oxidized minimally and had a few bite marks on it that were not too deep. There was not a lot of work to do on this one so I went to work.

I took it into the kitchen and turned on one of the gas burners on the stove. I wet a dish cloth so and laid it on the counter next to the stove. I heated my old butter knife over the flame. I placed the folded wet dish cloth on the dents that are visible on the sides of the bowl to steam them out. The hiss of the hot knife on the damp cloth generated the steam that lifted the dents. I worked on the dents on both sides of the bowl and on the rim. When I was finished the dents were gone. I washed the exterior of the bowl down with some isopropyl alcohol to clean off the darkening along the top edges of the bowl on the back side and on both sides. It came off quite easily. Once that was done I sanded the bowl with micromesh pads to smooth out the finish and prepare it for restaining. I stained it with a medium brown stain. I buffed it with White Diamond and then gave it several coats of carnauba wax.

I used my heat gun to lift the tooth marks on the stem near the button and then sanded it with 240 grit sandpaper and also the usual 400 and 600 grit wet dry sandpaper and water. Once they were smoothed out I sanded it with micromesh 1500-6000 grit and then put it back on the bowl. I  buffed and polished the whole pipe and waxed it again. It is a beautiful little pipe that I will enjoy smoking. 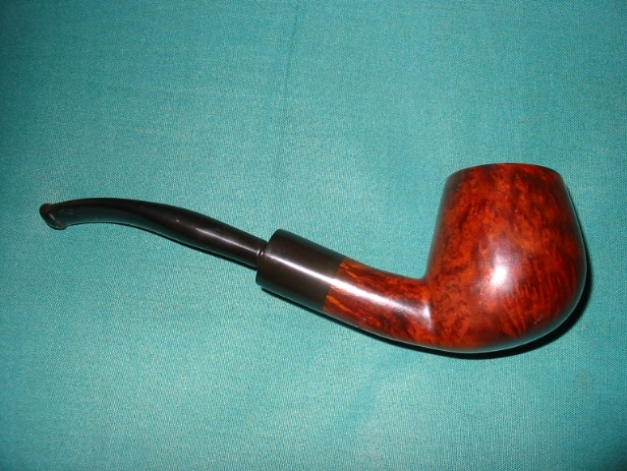