The next pipe in the queue is another one that Jeff picked up – this one is a Schoenleber Hand Made – a straight shank Crowned Rim Billiard with some beautiful grain around what appears to be an oil cured bowl and shank. The entire pipe has some beautiful mixed birdseye, flame, cross and swirled grain around the bowl and shank. But it is under a thick coat of oils, grime and dirt. The carver did a great job utilizing the block of briar to maximize the grain. The pipe is stamped on the left side of the shank. It reads Schoenleber over Hand Made. On the right side of the shank it is stamped Imported Briar. The thick taper stem is vulcanite and is unmarked. I think that this will be another nice looking piece once it is cleaned up. The bowl is thickly caked with a thick overflow of lava on the crowned rim top. The exterior of the briar was dirty with grime and dust. The stem has light tooth marks and chatter on both sides. It is lightly oxidized and has some calcification. Jeff took photos of the pipe before his cleanup work. They tell the story and give a glimpse of the promise that we see in this pipe. 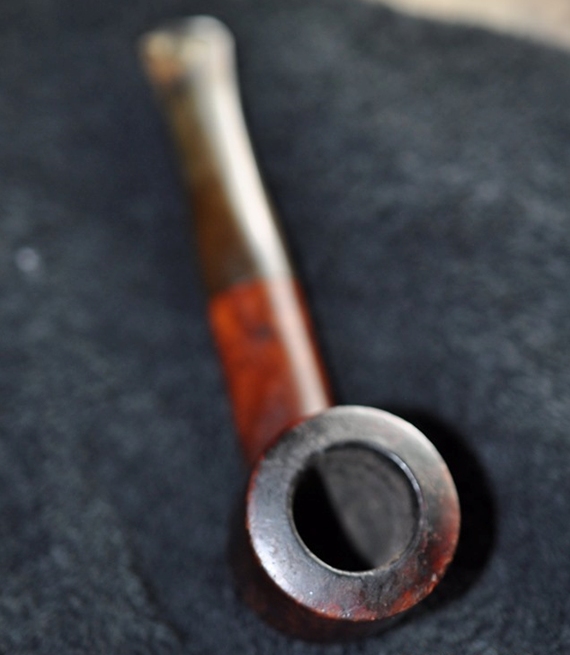 Jeff took some close up photos of the rim top to show the thick cake in the bowl and the lava overflow on the crowned rim top and inner edge.  It appears that there is some damage on the inner edge of the rim at the back of the bowl.

He took some photos of the bowl sides and heel to show grain that was around this bowl. In the photos you can also see some of the dents in briar that will need to be dealt with. It is a nice looking pipe. 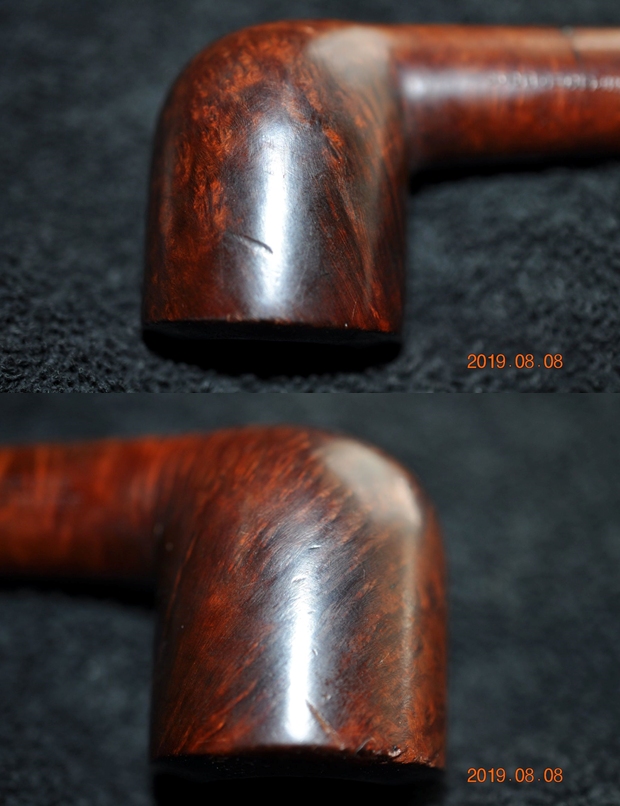 He took photos of the sides of the shank to show the stamping. The stamping is clear and readable in the photos below and is as noted above. On the left side it reads Schoenleber Hand Made and on the right it reads Imported Briar. 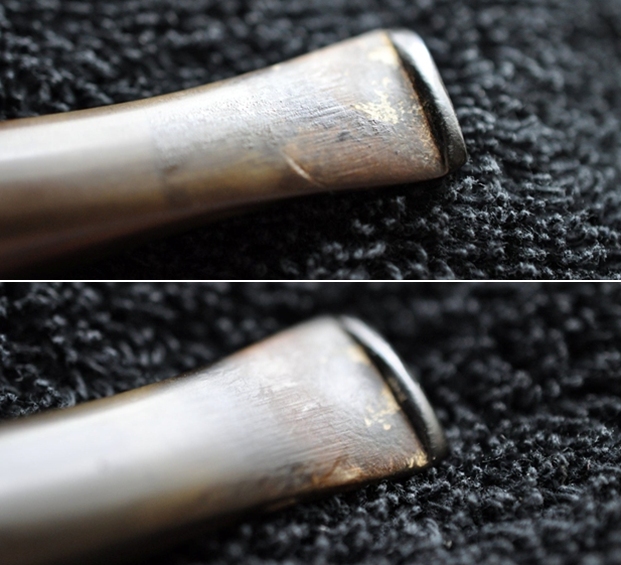 Armed with those reminders about the brand I turned to work on the pipe itself. Jeff had done a great job cleaning up the pipe as usual. He reamed the pipe with a PipNet reamer and cut back the cake back to the bare briar. He cleaned up the walls with a Savinelli Fitsall Pipe Knife. He scrubbed the interior of the bowl and shank with pipe cleaners, cotton swabs and alcohol to remove the tars and oils. He scrubbed the exterior of the pipe with Murphy’s Oil Soap and a tooth brush to remove the grime from the finish. He worked on the rim top lava and darkening with the soap and tooth brush. He scrubbed the inside of the stem with alcohol and pipe cleaners. He scrubbed the exterior with Soft Scrub and then soaked it in Before & After Deoxidizer. He washed it off with warm water to remove the Deoxidizer. The pipe looked far better. 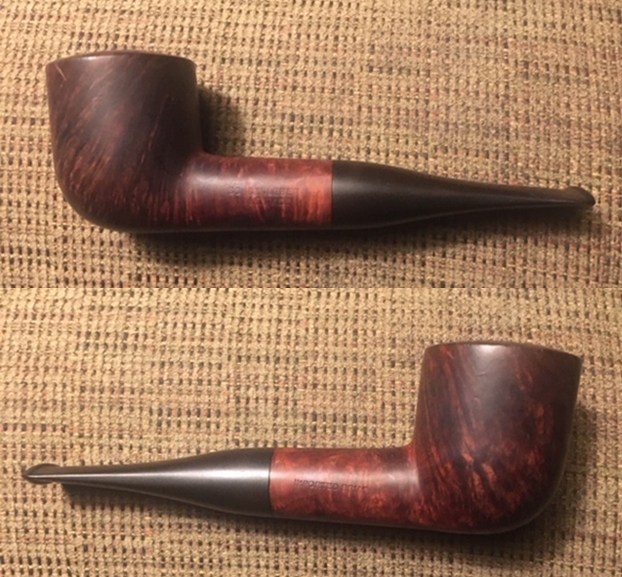 I started my part of the restoration by working over the inner edge of the rim with a folded piece of 220 grit sandpaper. I worked on it until the chamber was round again. I sand out the damage on the outer edge and the rim top at the same time.

I polished the bowl and rim with micromesh sanding pads – wet sanding with 1500-12000 grit pads. I worked over the rim top and edge of the bowl with the pads. I wiped the bowl down with a damp cloth after each pad to remove the sanding debris. 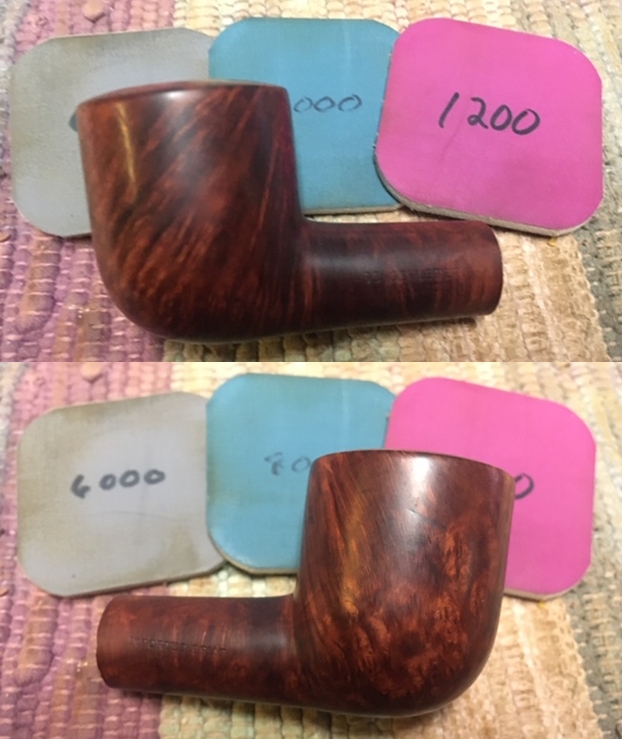 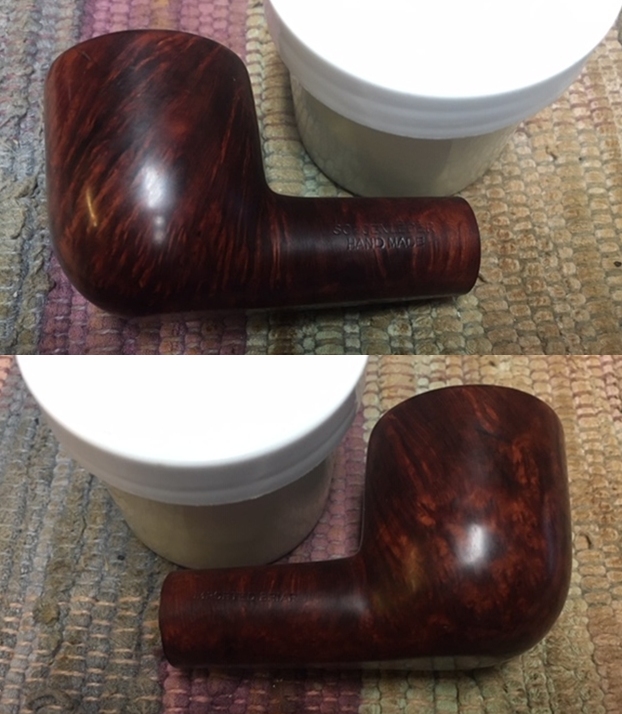 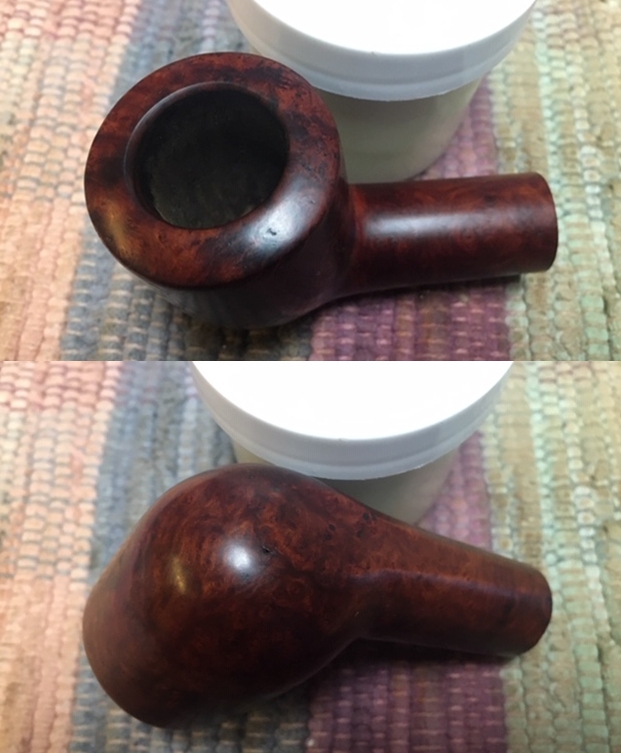 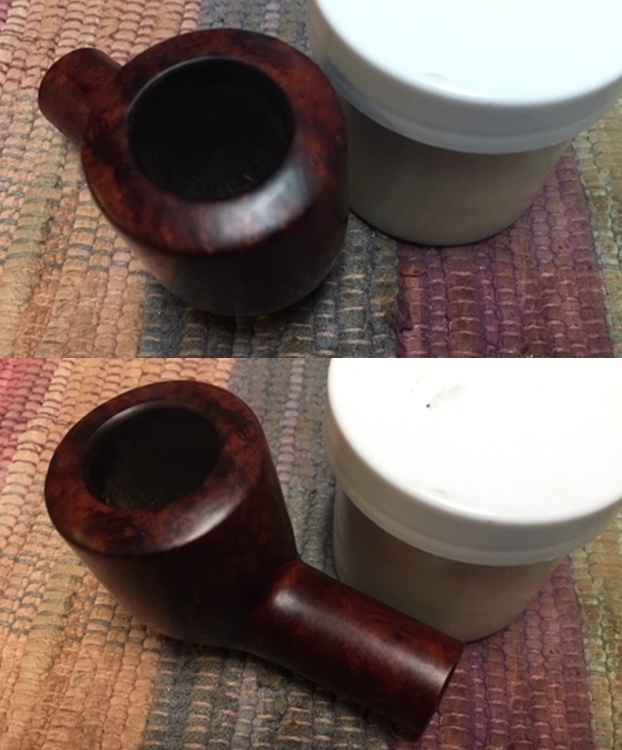 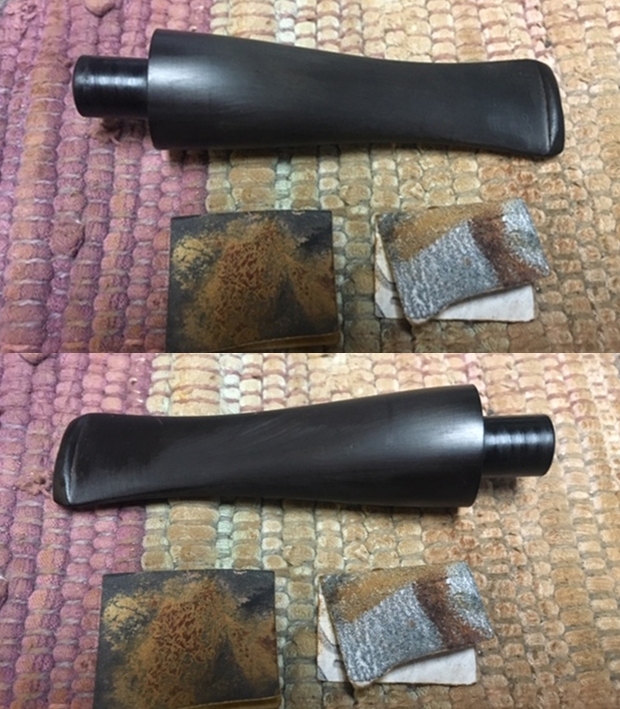 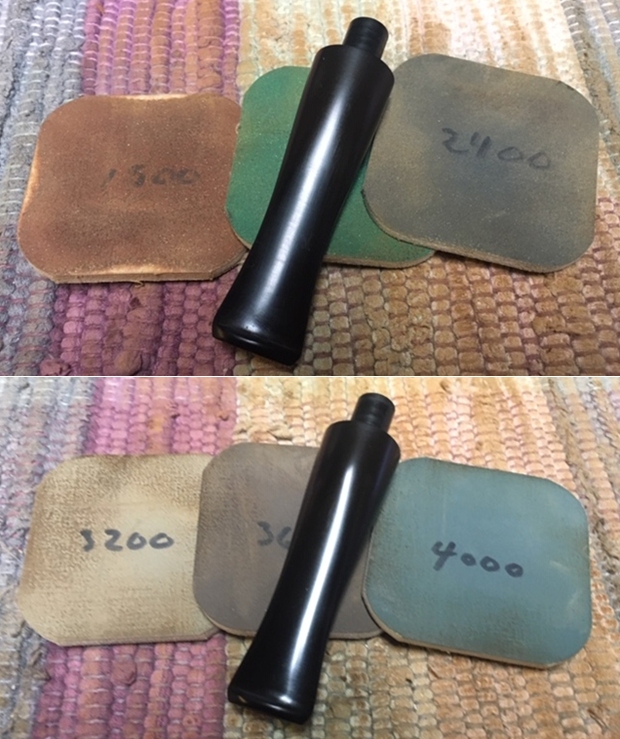 With both parts of the pipe finished, I polished the bowl and the stem with Blue Diamond polish on the buffing wheel. I gave the bowl and the stem multiple coats of carnauba wax. I buffed the pipe with a clean buffing pad to raise the shine. I hand buffed it with a microfiber cloth to deepen the shine. The pipe polished up pretty nicely. The rich oil cured finish and the grain came alive with the buffing. The finish on the briar works well with the polished black vulcanite stem. The finished pipe is a well-proportioned, nicely grained Schoenleber Crowned Billiard. Have a look at it with the photos below. The dimensions are Length: 5 ¼ inches, Height: 1 ½ inches, Outside diameter of the bowl: 1 ¼ inches, Chamber diameter: ¾ of an inch. This Schoenleber Hand Made Crowned Billiard will be going on the rebornpipes store in the American Pipe Makers shortly. Thanks for walking through the restoration with me on this older American Made pipe. 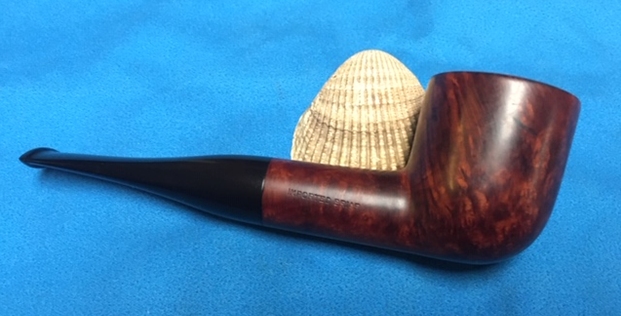 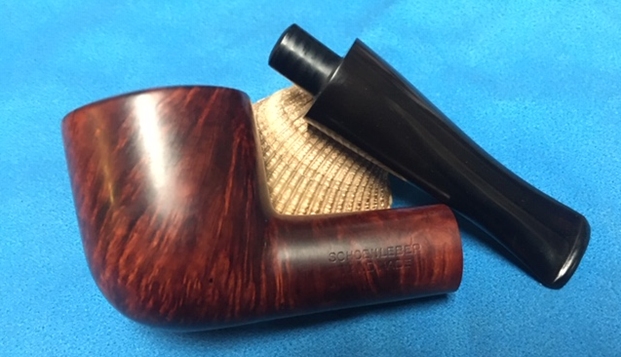 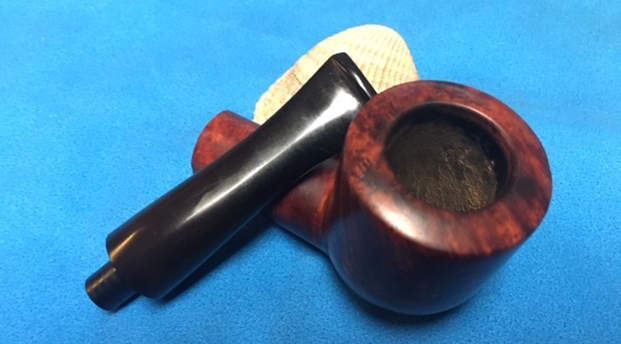 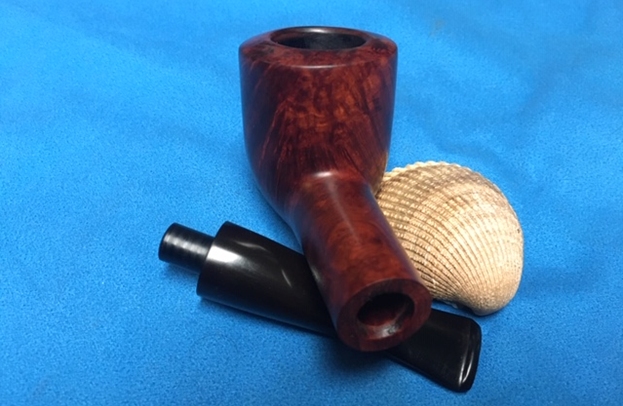