I was in India and Nepal for work through most of the month of January returning to Canada on the first of February. While I was traveling, I got an email from a woman in Ontario, Canada saying that she was the daughter of a fellow pipe smoker and an Anglican minister that I had talked to over the years. I knew him as Fr. Dave (his online name). Her father and I had many conversations over the years about our common work and love of pipes. We emailed, chatted on the forums and shared phone conversations. I had repaired, refurbished and sold quite a few of his pipes over the years for the benefit of an online forum that we both frequented and where we had met. I have several pipes in my collection that were gifts from David and whenever I smoke them, I think of him and our conversation.

I knew that he had struggled for a long time with a degenerative spinal disease and other health issues. I had not talked to him for some time. The last time we spoke, he let me know that he was coming near the end of his life. We had enjoyed a good conversation, laughed and reflected on the brevity of our lives together. We said good-bye but I had no idea that it would be the last of our conversations. The email from his daughter informed me that she was cleaning up his estate and that he had specified that the last box of his pipes should go to me because I would do what was necessary for them to be usable. She wanted to know if I wanted them. She was uncertain as to what they were in terms of brand other than they were probably his personal smokers. She did not know if they were worth anything or if I would even want them.

When I received his daughter’s email, it saddened me that David was gone. I knew that his struggle had been long and painful and now that it was over. I was glad for him regarding that and because of our common hope, I looked forward to the day that we would connect once again. I wrote back to her from Kathmandu, Nepal and thanked her for her email. I passed on my condolences regarding her dad and sent my regards to her mom. I let her know that it was an honor to have the opportunity take her father’s pipes. I would gladly do whatever it took to make sure that they would continue to be used by pipe smokers.

I received another email from her while I was in Hong Kong waiting for a connector flight back to Vancouver that the package had been shipped. She said that surprisingly the box had over 60 pipes in it. From my calculations, I figured that the package and I would arrive in Vancouver at roughly the same time. She asked that I let her know once it arrived and what I thought about the contents. Now my curiosity was peeked. I could not wait until I got home. I had to wait 11 hours for the connecting flight in Hong Kong and then another 11+ hour flight to Vancouver before I would see the box. I was excited to see what she had sent me.

I am sure I am probably strange, but during that time I mulled over what I thought might be in the box she sent. I had worked on enough of David’s pipes over the years that I had some ideas. I knew that in the later years he has smoked small pipes that were lightweight and easy to clench or hold. I knew that these would probably be small. I had no idea with regard to brand or shapes might be in the assortment she had sent. I knew that whatever was there I was in for a treat when I unpacked it and reflected on David and our talks. It made my wait and the trip go by much quicker.

I took a cab from the airport home and my daughter met me at the door. The rest of the family was at work for a few more hours. The first thing she said after our greetings was that I had a package on the dining room table. I put my bags aside and went to look at the box. It was from David’s daughter. It was far bigger than I expected from our emails. It was a computer paper box about 10×12 inches wide and long and 12 inches tall. I carried it into the living room and opened it with a knife. When I took the lid off the box I was really surprised. She had packed the box full with pipes. Each pipe was individually wrapped with paper towels so I had no idea what was hidden inside them. There were also two books and a plastic box in the top of the package. I took these out first. They are shown in the photo below. 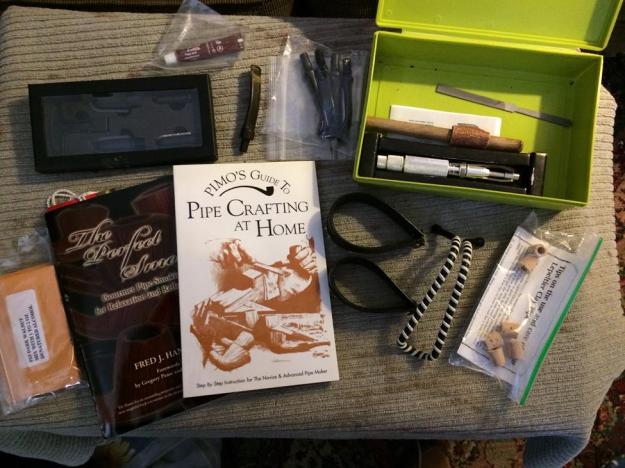 The books were the Perfect Smoke by Fred Hanna and Pimo’s Guide to Pipe Crafting at home. There were three pipe rests – two made of pieces of leather and one a wrapped iron contraption. I opened the plastic box and inside were a few surprises. There were pipe stems and parts for a Lepeltier ceramic pipe. There were envelopes of powdered alcohol based stains. There were two pipe reamers – a Castleford and a Senior Reamer. There was a needle file and a dowel with sandpaper. The last item was a tube of pipe stem polish from Savinelli. There were also four pipe bowls and some stems. They were apart so I had no idea if they went together. I sorted through the stems and found that all had stems. This must have been David’s workbox because all of them had been reamed and cleaned. All of them were small Peterson’s pipes.

Now I was curious as to what the rest of the box held. I carefully unwrapped each paper towel covered package and made a pile of the pipes. I counted the pipes as I unwrapped them and put them in the pile. I was like a kid opening his Christmas presents. Each new package revealed another beauty and my daughter laughed as she heard my ooohs and ahhhs. The pipes were all quite diminutive. Many were brands I had heard of but even among those were lines I had not heard of and shapes that I had not seen before. Some brands were new to me while others I had heard of but had not seen before. The pile of paper towels and the pile of pipe both grew as I unwrapped each pipe. When I was finished, there were seventy-three pipes in the pile.

I sorted the pipes into piles for each of the brands that were present. The first pile included forty-three Peterson’s pipes and pipe socks. The photo below shows the assortment of shapes – princes, billiards, apples, pots, bulldogs, Canadians, Lovats, Zulus and system pipes. There was a Pete Meerschaum, a barrel and a tankard. All were in decent shape and would be easy cleanups. I was surprised at this lot. 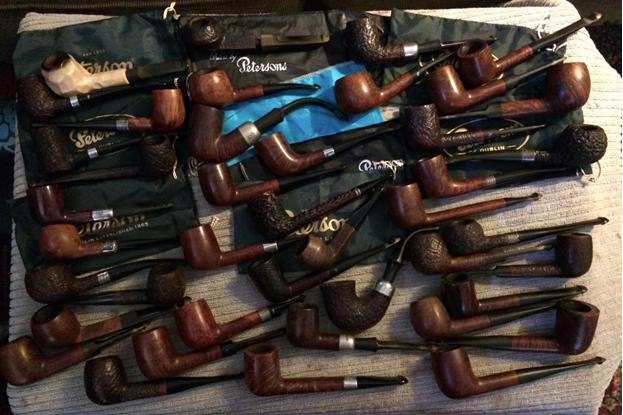 There were five Brigham pipes of different shapes and bearing different numbers of dots. There was a 2 Dot Lovat, a 1 Dot Prince, a ¼ bent 1 Dot Dublin, a straight 2 Dot Bulldog and a Sportsman 5 Dot bent Dublin. I have worked on a lot of Brigham pipes over the years but I do not know enough about them to be able to identify the era of the pipes but Charles Lemon of Dad’s Pipes is my go to guy for that kind of information. I will be contacting him with the stamping on each one and try to gather more information on them. 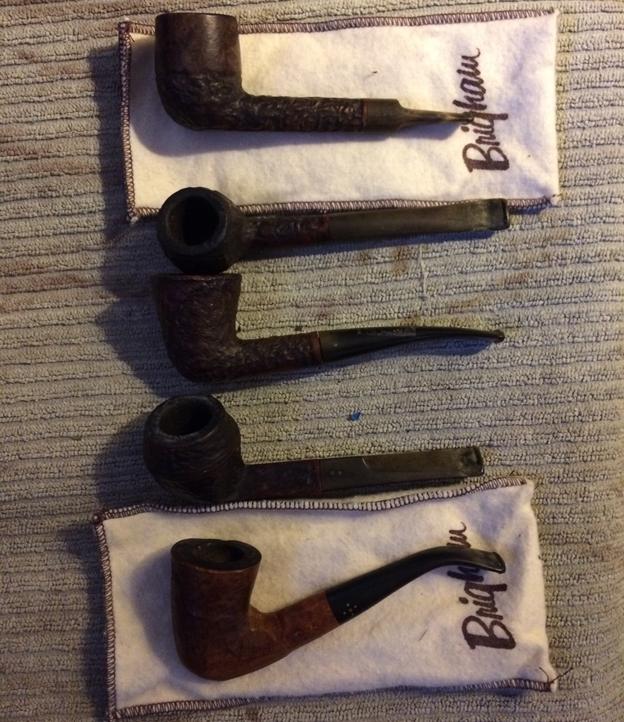 There was a Trypis semi rusticated bent billiard with original box and pamphlet. That would be a fun historical piece to clean up and restore. 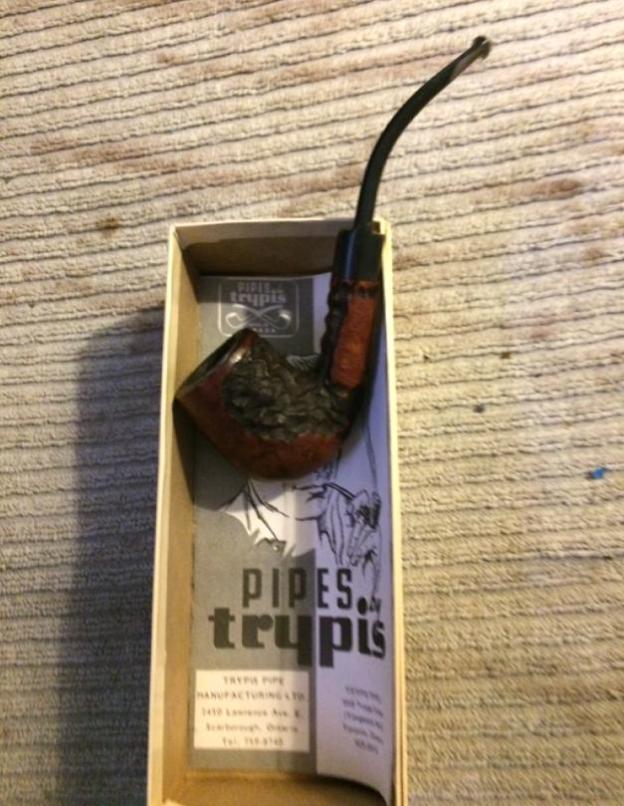 There was an old clay pipe that was darkened and worn looking. I can see markings on the shank and the bowl that were cast into the clay. The pipe should clean up nicely and give me a chance to play around with a method of cleaning old clays that I have read about and wanted to try out.

The next photo shows the remainder of the pipes. They were a mix of brands and shape – from basket pipes to English Made to hand made Danish. Before I list them for you see how many you can identify from the photo. There are some nice old pipes in the lot that should clean up nicely. 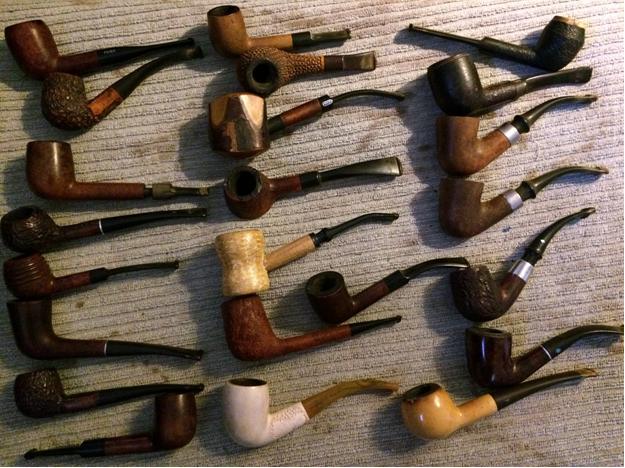 This is one of those occasions where I was able to remember a lot of my conversations and correspondence with David. It brought a mixture of gratitude for his kindness in thinking of me with these pipes and of sadness that our conversations would be no more. In the months ahead as I clean up the pipes and post them on the blog I will try to include some of those memories in the write ups.

Rest in Peace David, I suppose I can say that I will see you one day in the not too distant future as the years roll by for me. I lift a bowl of nice Virginia tobacco in your memory in a pipe you gave me and pause to think of you and give thanks. Thank you also to your daughter for following up on your wishes.

14 thoughts on “﻿ Coming home to an amazing surprise”